What? You were expecting Disney Princesses? 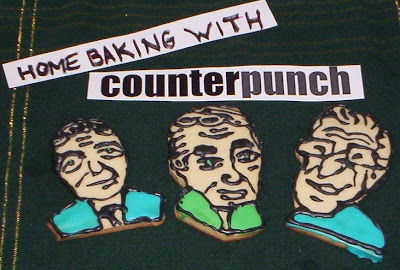 Look, here comes Noam Chomsky. You won't find him boring and dry with an egg and entire cup of pure butter! More fun than trying to make sense of Aspects Of The Theory Of Syntax. And tasty too! 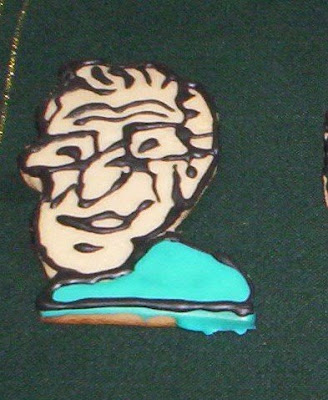 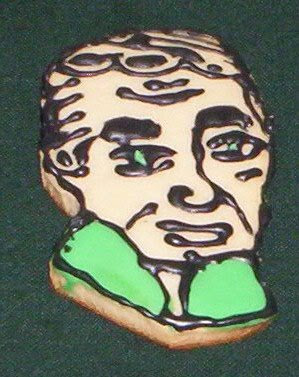 If you insist on chewing off Ralph Nader's head-it might as well be bursting with vanilla and sugar. He's so sweet I'll bet his Mama called him "Ralphiecakes." I know I would! 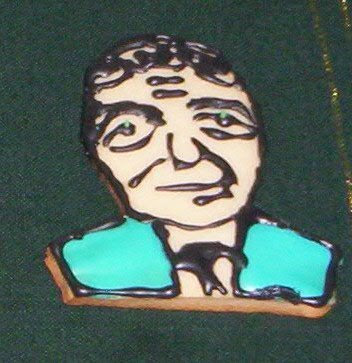 I got really skilled with rolled cookies and decorator's icing at Christmastime. I mean a skill is a skill, correct? Besides, the kid wanted cookies. I'll try keeping this as a feature on Mondays as long as I can come up with recognisable people that take well to caricatures. I'm open to suggestions.

You're not reading Counterpunch? Why not? Go. Shoo. Read. Subscribe.

*Yeah, I know-Zinn has much better hair in real life. I need better decorator's tips. You have no idea how many tries it took to keep Chomsky from looking like Larry King (it's the glasses, I think). Nader? I did the best I could searching the web for a photo. The man never smiles (at least not for photographs). I gave him kind of a half-smile, but I think he just looks constipated. I dunno-sorry Ralph, I tried.

Posted by Goody at 1:25 PM
Labels: Home Baking With Counterpunch

This blog is nothing but heaven. And politically-correct, too, with Noam Chomsky and Howard Zinn making appearances.

Honestly: cherry pie, sourdough- and corn-bread, that beautiful buttery cake with a ribbon, marmalade and chickpeas. All things I love. Is there any better heaven?

It would only be better if you were here.

awww....... Is it hot and nasty in the summer? I want cool. Like along the Cali coast, but who can afford that?

Horrible, and getting worse each year. We get a few nice weeks in the early spring before it turns into the Kalahari. Awful, awful, awful.

Well then, just like Boston, I'll do the fall, winter and spring, but summer will make me move away.

I don't mind the cold. But heat is a deal breaker.