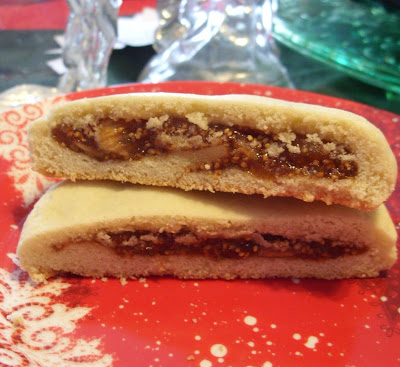 The snow has been falling since early morning, and as evening arrives we still can't see the road from the frontroom windows. This is my favourite sort of day. True, we did have plans for today that ended up scrapped, but instead we baked, listened to Christmas music, and conducted a few science experiments with magnets and electricity. I poked about in the attic today and located the belt to a dress that has been missing for at least ten years-thankfully, I still own the dress. I suppose it can take a major snowstorm to act as a reminder of all the things to be done at home.

Those figs my husband purchased for me finally found their way into baked goods. Oh, I've eaten my share of them straight from the packet (I adore figs) but I couldn't very well let them all disappear without making fig bars first.

This is a vintage recipe from the 1950 Betty Crocker Cookbook. I noticed the Nut Free Mom is resorting to the same volume today for nut-free gingerbread houses. Really, for seasonal treats that adapt easily to omissions or whatever you happen to have on hand, that cookbook cannot be beat. The recipes are simple enough for a novice, and many of them feature recipes for both larger and smaller batches. It might not be the flashiest cookbook I own, but it is one of the most reliable.

I know you will see shortening in the recipe and wonder if butter would work better. Ordinarily, I like to err on the side of butter, if you will. In this case, as with tortillas, and other things that need to remain soft, go for the shortening. The bars will avoid becoming crisp, will last longer, and it will save you some money as well. Thanks to my friendly butcher ("hi friendly Hy-Vee at 90th and Center butcher!") who placed the oddball order for me, I have about ten pounds of beef suet in my freezer-and I was tempted, but as Danny is vegetarian and does not make exceptions for a suet pudding (fool) I went ahead and used vegetable shortening. I also have a freezer stocked with venison again ("hi friendly husband's boss who goes hunting") so yes, there's some sausage in our future.

I made the filling a day ahead, and it would have been wonderful just as a spread for toast. I substituted orange juice for the lemon and part of the water but I'll note that in the recipe. I really love figs with orange. Because I had Greek string-style figs (they are no longer on an actual string, but are packaged to appear as though they are. *shrug*) the skins tend to be somewhat tough. I cut the figs and scooped out the pulp, which is a bit of work. I do feel it was worth it, but I suppose I could have simply run the finished filling though a food mill. You could leave the skins of course, but these really are on the thick and tough side compared to Mission figs.

Make the dough up to a day ahead and be warned-it is infuriatingly soft and difficult to work with. Worth it? Of course, but be prepared to do a bit of patching. I rolled mine out larger than the recipe called for making slender long bars shaped like biscotti. I'll post the original directions which make a more Newton-like" sized biscuit. Store them in an airtight tin, or crockery jar. They last beautifully.

Cream shortening and sugar together until light. Beat in eggs. Stir in cream and vanilla. Sift dry ingredients together and mix in. Chill dough, tightly wrapped in cling film several hours before using.

Preheat oven to 400 degrees F. Grease two large baing sheets. Roll out 1/2 the dough 1/8 inch thick. Cut into 4 large strips 3 1/2x12 inches. Spread 1/3-1/2 cup filling on each strip lengthwise covering only half the strip except for a 1/4 inch edge. Lift this edge up and stick it to the filling. Quickly flop the uncovered half strip over the filling, folding it under at the edge. Seal the two edges securely. With a sharp knife, cut into bars 2 inches long. Place 1 inch apart on baking sheet. Bake 8-10 minutes or until lightly browned.

I did not shape them this way, and I don't see any reason you couldn't make them round with a biscuit cutter and top with another circle that you crimp. You could also do large circles and fold them over into crescents. Use your imagination, but be warned that getting that dough 1/8 inch thick takes some skill (and a stocking net on the rolling pin).

Cool on racks, then store in tins.
Posted by Goody at 2:58 PM
Labels: Betty Crocker, Biscuits, Figs, Mama's Cross Today So She Baked Cookies And Now You HAve To Tell Her You Love Her Because That's How Guilt Works, Vintage Recipes