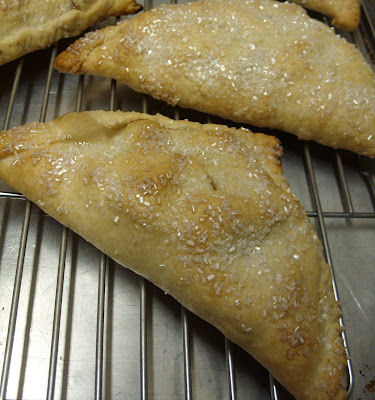 This has been a fantastic year for Bartlett pears. I haven't had a bad one yet, and I'm determined to preserve some before the season ends. This dessert was met with amazement, but trust me, it is really no effort to prepare. I have a theory that coarse sugar atop most baked goods convinces people that the pastry is somehow more impressive than it is. I won't tell if you don't.

On a trip to Big Lots a few weeks ago, I was able to buy Baker's chocolate semi-sweet chunks (the exact same item as the stuff in the box, already chopped) for $1.18 per 12 oz. bag. With the eight ounce box now averaging over three dollars, I felt rather pleased with my find. I can make hot chocolate in under a minute now that I no longer need to get out a knife and chop. That may prove a bad thing-ask me how much weight I've gained at the end of winter. As I now have a seemingly endless supply (well, it seems that way) of chocolate, I've been using it a bit more generously that I typically would-in a pear turnover, for example.

I'll leave the pastry recipe to your tastes. I used an all-butter pie crust recipe that does not have eggs or vinegar. It is durable yet not so heavy that it looses the flakiness one likes in a turnover. I could see using purchased (or homemade) puff paste, or even (gasp) the crap that comes in a tube at the supermarket. Heresy, I know. I can put a pastry crust together in minutes, but I also recognise that not everyone is blessed with poor circulation and freezing cold hands. Arthritic old people make the best pastry-that is a fact. No it is, shut up.

The filling is what you need me to disclose. This is essentially the filling I use for apple turnovers substituting chocolate for the raisins. You could of course add raisins, which would be delicious with the chocolate, but I'd reduce the sugar a bit. As it is, the turnovers aren't overly sweet, but pears can quickly get overwhelmed by sugar. I also used a squirt of lime juice rather than lemon to keep the pears light. Sure, lemon would have been the obvious choice, but I had half a lime sitting in the fridge for a week and I wanted to get my .20 cents worth out of it. The taste was non-existent in the finished product-but the pears retained a lovely colour.

Finally, there is the matter of the pan. The turnovers will leak-they always do as it is simply the nature of this sort of pastry. I butter my sheets, but parchment would make for easier clean up if you care about that. As the filling is sugar and cornstarch, it comes off pretty easily with a soak in hot water, but I thought I should warn you about the alarming amount of ooze on the pan. I let mine cool on a rack, over another pan to catch any additional drips.

Pastry for a 2 crust pie
3 large, ripe pears, pared (ha ha, they're already pears-sheesh) cored, and sliced
1/2 cup coarsely chopped semi-sweet chocolate (bittersweet would do as well)
Juice of half a lime (or lemon)2 tablespoons butter, cut into tiny pieces
1/3 cup of sugar
1 tablespoon cornstarch (cornflour outside of the US)

Butter a large cookie sheet. Divide dough into 4 parts. Roll each out into a square about 1/4 inch thick (more or less).

Prepare filling by combining pears, chocolate, lime juice and butter. Toss together sugar and cornstarch and mix well into pears.

Mound filling in centre of each square and fold over. Seal by crimping with a fork (they'll leak anyway). Make a slit in the top to vent. Place on buttered sheet and chill 20 minutes.

Before baking, brush turnovers generously with heavy cream and sprinkle with coarse sugar (or regular granulated if that's what you have).

Bake about 30 minutes or until golden. Cool on racks, or serve slightly warm. Makes 4 very large turnovers (one can easily feed three people, or two greedy ones. OK, one extremely greedy individual can probably polish off an entire turnover...but I would never do that.)
Posted by Goody at 1:07 PM
Labels: Chocolate, Pastry, Pears