Can you smell the retro? Coronation chicken is one of those foods I haven't been able to face for years-my mother ruined a lot of food for me. With the Jubilee this weekend, I thought it time to revisit the curried slop (er, salad) replacing the chicken with a baked tofu. I know what you're thinking, but know what? It worked. Not only did it work, but in some ways it is an improvement over chicken as the texture is better. Maybe your mother didn't stew her chicken beyond recognition to the point where it was some sort of sticky mush, which was then tossed in curry powder and salad cream. She went through a period of cooking everything with Madras curry powder, which I like, but I could do without the hard cooked eggs. Or overcooked chicken. Curried chicken over rice was the last thing she cooked before went in hospital for the surgery that killed her. I always felt kind of bad that the last meal she ate in her own home was some crap curried chicken. Had I known it would be the end, I would have driven down the street, and bought her doner kebab from the falafel joint with the drive through (that was the only redeeming thing about that suburb was being able to get a kebab at 1 AM when everywhere else was closed). Instead, she got curried chicken. Twenty years on I still remember coming home from the funeral and dumping it down the garbage disposal.

Aw geez, this isn't making you want curried chicken salad, is it? I didn't think I did either, but a couple decades away from it did help me look at it anew.

I followed the recipe HERE, with a few changes (obviously using tofu rather than chicken, but also making a homemade chutney, and cooked salad dressing). Because of nut allergies, we skipped the almonds, but I had just sprouted a container of lentils, which made for a nice crunch. I made sandwiches to take along on a picnic today, and they were enjoyed by all. At home, serve it over a bed of rice with some salad greens.

Photo of a child enjoying himself at a picnic. I gave him a haircut last evening. I was given strict instructions not to cut too much as he likes his, "rock star hair." I should have given him a damned mullet. Anyway, he's at that age (seven) where he can't be persuaded to smile for a camera, but really, he was enjoying himself. I know he was as he ate two Coronation chicken sandwiches. 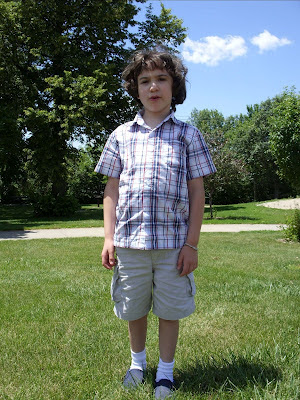 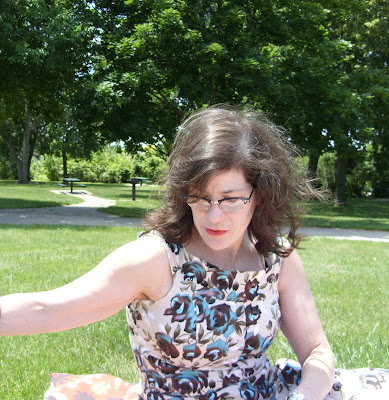 I enjoyed myself as well. I could use some self-tanner, eh? Gosh. The light at home is so bad I leave the house thinking I look OK and then see photos of myself and I'm like, "Hey, who's the pasty ghoul?" and then well...yeah, self tanner. Note to self.

Whisk together, pour over tofu in a pan. Turn tofu once, then bake in a 400 degree F. oven 30 minutes. Turn the slices, bake another 30. Cool. Slice as thinly as possible in strips to resemble shredded chicken, or dice finely if you prefer. This will be your, "chicken" proceed with recipe.

I cannot handle mangoes as I am allergic to latex and the sap on the skins gives me a terrible rash (true, strange I know). To compensate, I used fresh peaches, dried apricots, and some apricot jam to make a sweet chutney.

Combine all, bring to a boil then reduce to a simmer. Cook until thickened. Makes about 1 1/2 pints.
Posted by Goody at 5:21 PM
Labels: British, curry, England Your England, God Save Our Queen, Meat Substitutes, Meatless, Salads, Tofu, vegetarian