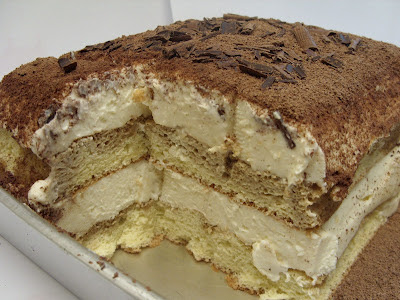 Mascarpone cheese is so expensive where I live, this would have been a really extravagant dessert. The recipe I had gave an option of using a cream cheese and whipped cream filling, which is what I did-still no bargain, but it won't consume a week's food budget either. I really liked that this was made with a simple sponge cake baked in a 9x13 pan and then cut in half-no fiddling around making ladyfingers, or layers. The twelve minutes in the oven was the most time consuming part of the recipe. We're nearing the end of Spring term, and extra time is something I just don't have.

From, Dolce Memories, a rediscovery of Italian Desserts by, Irene Ritter

Preheat oven to 375 degrees F. Grease and flour a 9x13 pan. Beat yolks until thick-set aside. Whip egg whites and 2/3 cup sugar until stiff peaks form. Fold in egg yolks and vanilla with a rubber spatula. Fold in cake flour until well blended. Pour and spread evenly in pan.

Bake 12 minutes, or until cake tests done. Cool 5 minutes in pan on rack, the remove to a rack and cool completely. When cold, cut in half to make 2 layers (do not split the layer in half, but rather cut it down the centre to make two 7 inch or so layers. Got it?

beat cream until soft peaks form-set aside. Beat cream cheese and icing sugar just until stiff-don't over beat (the recipe says it will curdle). Beat in the whipped cream, vanilla, and Marsala. Chill.

Stir the sugar into the coffee until dissolved.

Assemble in an 8 inch pan. Lay down a sponge half. Spoon on half the coffee. Top with half the cream filling. Then the second sponge, remaining coffee, and filling. Smooth the top and cover with the grated chocolate. Cover with cling film and chill. Can be made ahead and stored up to two days. Garnish with a fresh strawberry.
Posted by Goody at 7:01 PM
Labels: Chocolate, Coffee/Espresso, Cream Cheese, Desserts, Heavy Cream, Italian, Pastry