Safe From Sea Monsters in 2017 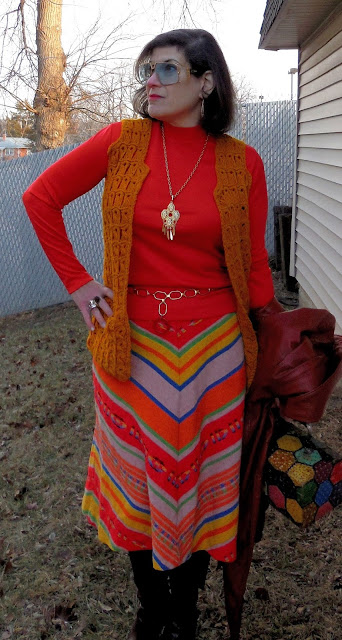 Hello 2017!
I was met with a beautiful start to the new year with mild(er) temperature and roads free of snow and ice. I couldn't think of a better way to start the year off than plunking money into video games, so... 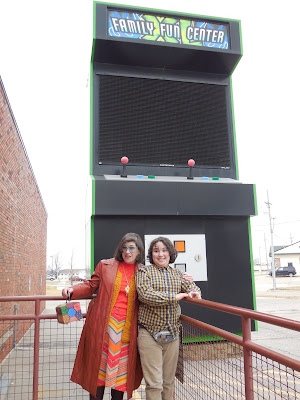 It wasn't terribly crowded. Probably not a good place to go 1 January with a hangover. We were on a mission though. Danny wanted to see how far he could get on a Sega game called, The Ocean Hunter. 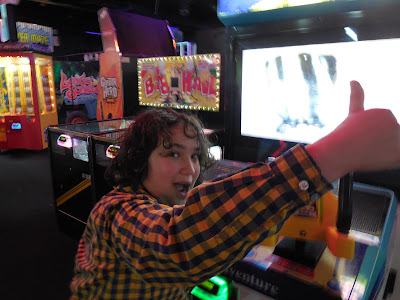 He finished the game. Forty minutes after starting, he completed the bloody game. I've never run a video game to the last level. That's either a great start to the new year, or a disappointment because nothing else will ever be as exciting. Anyway, that's a proud parental moment though I can't take any credit for it-we only drove him to the arcade. You'll be pleased to know he's rid the planet of some very nasty sea monsters, so next time you're at the beach you know who to thank. 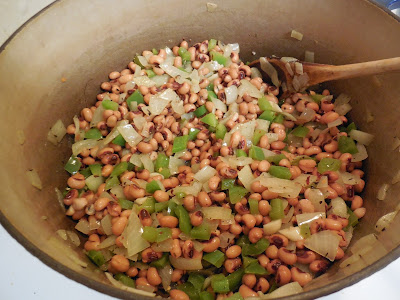 We made the traditional American New Year's bean stew, Hoppin John popular in the Southern states. I did a meatless version with soya bacon, and served it over rice. 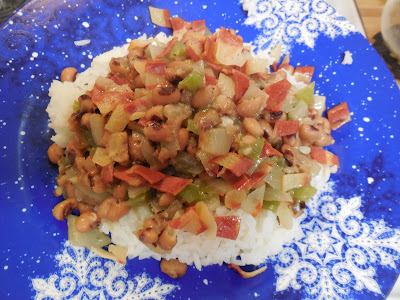 I'll be packing away my holiday china this week, but I haven't decided which set to use until spring. I have a full service of Johnson Brothers Friendly Village, but I might rotate it out with the Noritake stoneware. I have far too many sets of dishes for three people. I hope Danny takes them someday when he moves out.

Let's have a quick cocktail:
The Artillery
2 oz. gin
1 oz. sweet vermouth
2 dashes bitters.
Stir well with ice, and strain into a cocktail glass. Serve with a twist of lemon peel. 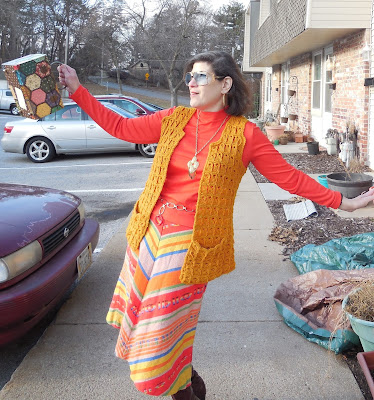 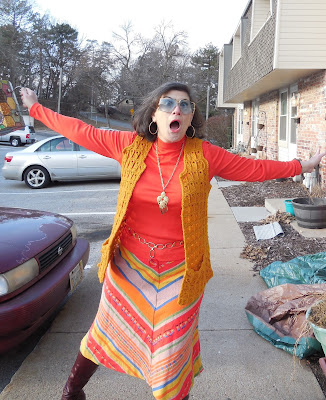 I won't be taking myself too seriously in the new year (I'm too old to start now)!
Hope 2017 is good to you.

Oooh, love that orangey-red outfit! I haven't met a chevron skirt I didn't like. Johnson Brothers china! Wow! You're so lucky to have a full set!

Thank you to Danny for clearing the ocean of monsters.

Oh my, now that outfit is truly a 70's tangerine dream! I almost thought that necklace was one of those owls that were so popular.
Tell Danny Sega rocks! My sons still play Atari & Myst on my crotchety old Commodore 64.
The Kashmiri contingency here will not eat black eyed peas, Nepalis do though.

How bright and cheerful you look in your orange outfit. I absolutely love that bag. The skirt is brilliant with those chevrons and I love the crochet waistcoat. The silver jewellery with it is so 70s!

I've just sorted out my wool stash and crocheted an infinity scarf last night,I'm just about to crochet an earwarmer and then will embarking on crocheting blankets for 'Knit for Peace'. I've got the crochet bug again...

Congratulations to Danny for ridding you of those sea monsters. My son was the same with computer/video games. He'd play them until he completed every bloody level; sometimes staying awake all night to do so!

@Thrifty Parka
The sewing is ever-so-close on the seam matching, and it bugs me because I know I could have sewn it better :)

@Bibi
Those old 64's are collector's items now! how cool to still have it.

@Ann
Maybe I'm not a good role model-I look stupid 99% of the time!

@Vix
Sea snakes are REAL? I thought that was just something out of Greek mythology. *Shudder*

@Veronica
The only thing I crochet these days are dish rags as I'm too cheap to buy them. I think that's lovely that you're making blankets for charity.

Glorious color and a riotous field trip - and excellent start to the New Year.

Now I'm giggling at your comment about Danny taking china with him. When we attempted to unload some Spode on the next generation, we discovered they favored the plain white service acquired from a Sears catalogue. (We added two boxes of silverware to sweeten the deal.)

If you ever start taking yourself seriously I will die.

@Mim
It is very easy to make, and if you own a slow cooker it can be ready when you get home from work...just cook the beans first (or use tinned) because you can't cook dried beans in a slow cooker without serious consequences.

@Beth
He wouldn't DARE not take it! I have a feeling we'll be holding onto it for years as he travels the world as a wildlife biologist. Then, he'll marry someone that doesn't like, "Old stuff." Watch, you'll see. Mark my words.

@Sue
Then I'd better keep doing what I am!