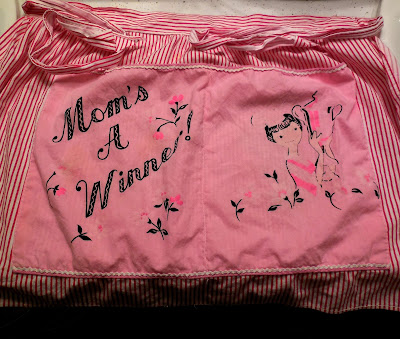 I recently purchased this apron declaring, "Mom's a Winner" with a picture of a woman holding a trophy (it has faded a bit). I'm trying to imagine my own mother's reaction if we'd presented her with this as a gift. Somehow, I suspect it might not have gone over too well. Aprons are a risky gift unless you're certain the recipient wouldn't be insulted. 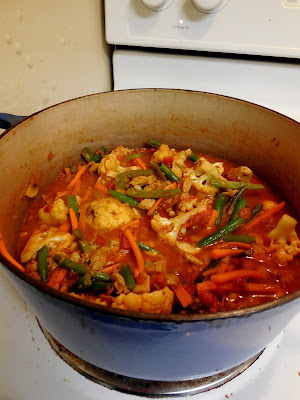 Of course, if you cook and care about your clothes it is best to wear an apron. Curry+nice clothes=disaster. For me anyway, because I'm a slob. My mother didn't cook much (mercifully) so she didn't require aprons. 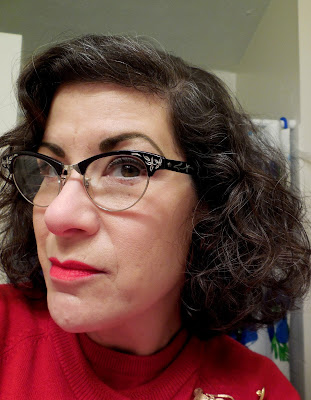 Between us? My mother didn't clean either, so she hired someone else to do it. Good thing too, or the house might have fallen down. But shhhh, don't tell anyone. I don't mean that as an insult-she was good at other things. If there was a trophy for getting your paintbrushes clean, she'd have won it. To this day I've yet to run across a painter that maintains even their most expensive sable brushes the way mum did. Today, we'd probably give it a diagnosis as some sort of disorder, but my goodness, those brushes were better cared for than we were.

I really didn't know how to cook, clean, or look after myself when I was out on my own. Mr ETB had to endure a rather steep learning curve as far as cooking and laundry were concerned, but after about 25 years I got the hang of it. Perhaps he deserves the trophy. Living on a a farm forces you to cook as there's no take away, and trips to town for supplies were rare. This blog is a scrapbook of sorts from my first pies to making a goose confit. I started the blog as a collection of recipes for my son as he grew up, but I never expected anyone else would want to read it. That people keep coming back here year after year, and that I've formed wonderful friendships is really the best. That's better than a trophy.

Which is all a long way of saying (once again) that the mirror is dirty. Sigh. I cleaned it yesterday. I think I'm going to conduct toothpaste-spitting lessons where they will practise aiming for the basin instead of the mirror. Until then, we'll have to use our imaginations and pretend this is a clean mirror. 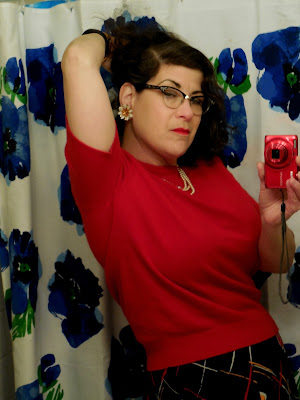 Ooops, sorry! you caught me having a Jane Russell moment there while I was daydreaming about a mirror that isn't spotted with toothpaste and shaving lotion. Oooh, the glamour! 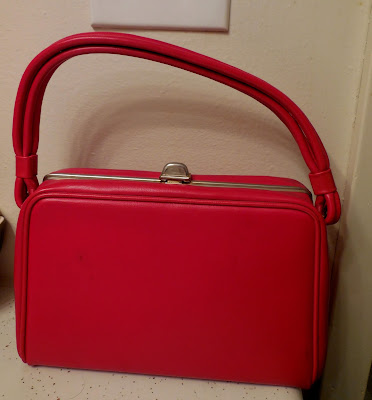 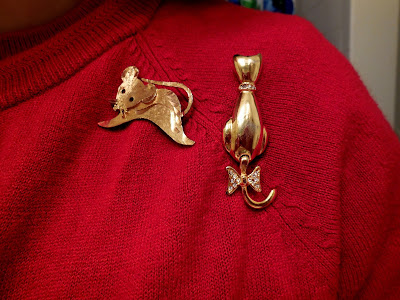 Can't wear a cat without a mouse. The cat's tail moves. 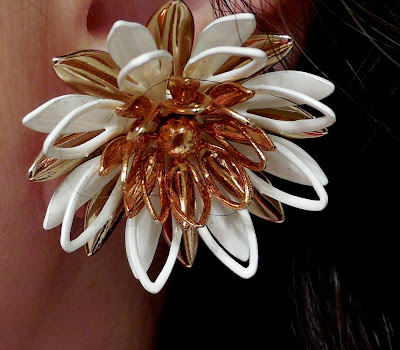 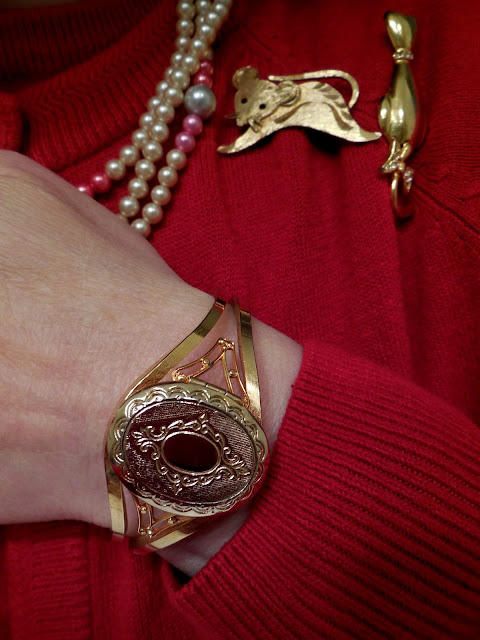 The locket on the bracelet opens, but I haven't put in a photo yet. I'm trying to think of something/someone wildly inappropriate so I can horrify anyone that asks if it opens. 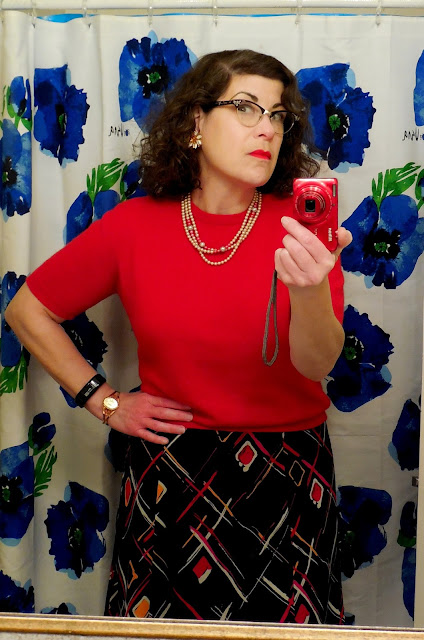 In May it will be thirteen years of Eat The Blog. Maybe (fingers crossed) I'll get the mirror sparkling by then.

Gracious, i think it's been a few years now since I stumbled across your blog while looking for a recipe for lemon and mace cookies! I found a wonderful recipe and spent an entire afternoon reading your blogposts. (Sounds kind of creepy/stalkerish but I was charmed by your writing and adventures as a new mom.)

I'm sure you would be appalled at the near squalor I live in. I'm not much interested in cleaning (although I love a clean house) and my maid doesn't seem much interested in cleaning either. Between the near constant cooking and ubiquitous silty dust of the Subcontinent I'm lucky if the dishes get done! We're having the house painted inside & out now- NOT a conducive situation for food blogging!

Ooo! i just looked up Ruffles as I'd forgotten what it smelled like. My mom had a tiny bottle. Tuberose + civet, how wonderfully obnoxious! I wants me the preshussss!

13 years blogging? Amazing! I came across your blog like so many others as part of someone else's blogroll - Vix's, I think. I'm very pleased I did, as I love your blog; your wit, your wonderful vintage clothes and accessories and your knowledge. And of course the recipes even though I'm not much of a cook (despite my name)! The photo of what you've been cooking looks delicious - is it a stew of some sort?

Red is a colour that really suits you. The skirt is fab and the yellow tights go so well with the whole outfit. Love those cat and mouse brooches and what brilliant earrings; they remind me of dahlias.

You are determined to give me a severe case of handbag envy this year aren't you??

A while back I had cleaned the bathroom, like completely blitzed it before Himself had got up (bad mistake) Later in the day my parents were visiting and I went up to use the bathroom walked in to see Himself had spat toothpaste all over the mirror so I just bellowed his name and apparently he turned to my Mum and said 'oh that's because I got toothpaste on the mirror' He knew he'd done it and still didn't bother to wipe it off!?!%$£! ARRRGH

@Bibi
Aw, don't bother dusting-the "Matte look" is in ;)
Ruffles has grown on me over the years-thouh the first ten minutes are...intense.

Thank you. I love your blog too!

It was a Balinese-style curry I found on the Internet. I used some cauliflower and green beans along with tofu instead of chicken. It was nice.

@Ann
A year of blogging is indeed something! I enjoy your blog so much as we share a love of 70's polyester and I learn so much about Belgium from you.

@Miss Magpie
It has to be a specific male genetic mutation! they know by the tone of voice when they're in trouble though.

I can't remember how I found your blog now, but it's deffo one of my favourites. I have a long list of blogs I read but not all are must-reads - yours is one I always read, even if I'm a couple of days behind and playing catch-up. Your posts have so much personality, and there's always something interesting to read.

Pete always decides to shave *after* I've cleaned the bathroom, and he never manages to get the sink properly clean. Drives me nuts.

Thank you, that's nice to hear.

This post has made me start reading your archives.
You're the first person outside my family who I've ever heard of knowing "Cooking in a Bedsitter".
Also, I also hate cucumber.

It was a popular book at the time. I have no idea if it is still in print-but it should be.