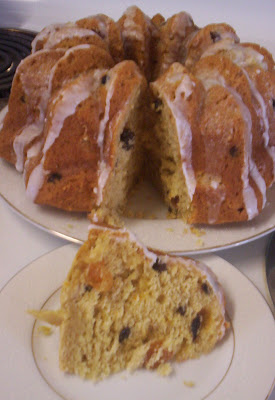 Well, here it is-the first Lenten cake of 2008. Until Easter, Friday Cakeblogging will be Lenten cakeblogging and here's a great way to start.

This cake has no eggs, butter, or milk yet is moist and flavourful due to 2 1/2 cups of orange juice (I juiced fresh Cara Cara oranges which worked well). The recipe called for cognac, but that didn't seem like a good use for it so I increased the orange juice. I also added a splash of orange flower water.

Instead of the half cup of chopped nuts, I added a 1/2 cup raisins to the sultanas already called for. This gave the cake some colour. I also skipped the powdered sugar because I have a very messy three year old and didn't feel like having it everywhere. If I'd thought of it, I'd have added some juice and flower water to the glaze as well.

The recipe may be found HERE.
Posted by Goody at 2:44 PM
Labels: Lenten Cake