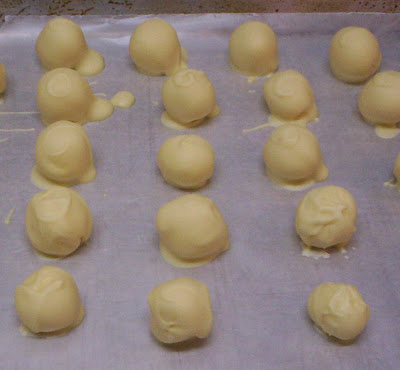 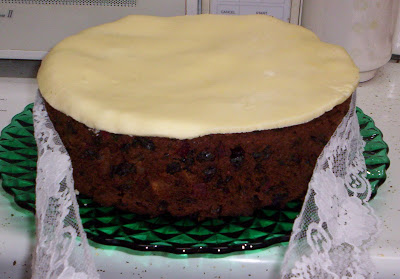 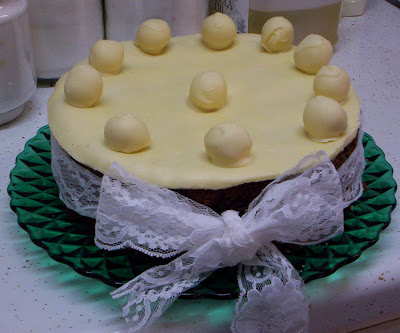 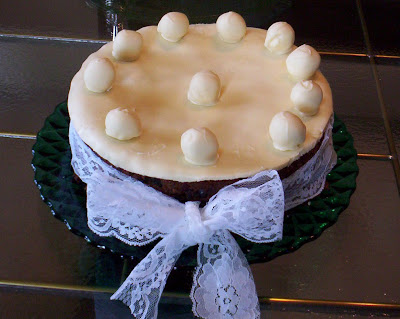 Last night, I woke around three AM convinced I was suffering appendicitis. I'm still not sure twelve hours later (nausea, pain, fever) but I'm going to assume it is viral until the pain becomes severe enough to send me to the hospital. When I say, "I didn't feel like baking today", believe me, I mean it. The problem was, I'd done a considerable amount of prep work for a cake that is on the relatively expensive side (all that dried fruit and butter). Between sips of ginger ale, I got the stupid cake baked. Then I realised, I used an entire cup of butter when the cake recipe called for ½. Oh well, the more the merrier-no one ever claimed this was health food. A funny aside-someone came to the blog today looking for Eat This; Not That-which is a sort of popular diet book that guides people to smarter dietary choices. Oh well, at least the poor soul didn't have to come eye to eye with a cheesecake as the top post. Yeah buddy, you've got the wrong blog.

Anyway, I solved the marzipan problem (nut allergy) by using a wonderful solid buttercream recipe that may be found HERE. I made a half batch and had enough for the balls and the extra I rolled out to use as a replacement for the marzipan layer. Clever eh? I flavoured mine vanilla because I couldn't think of anything that wouldn't clash horribly with the cake. I have both rose water and orange blossom water but was afraid it would be too much. I tinted it the palest yellow, which looks much better in person than my lousy camera lets on.

A Simnel cake is essentially a lighter version of a Christmas cake (fruitcake) crossed with a traditional British wedding cake. There can be an additional layer of marzipan or buttercream in the centre but I decided to quit before ruining it. Were this Christmas cake, I'd be tempted to booze it up after baking but as it isn't being wrapped and saved I felt that extra preservation step unnecessary. Do as you see fit.

Traditionally, Simnel cakes were baked for Mothering Sunday, the fourth Sunday in Lent. It was a time when people returned to their homes and "mother church" and soon the tradition evolved to bake a Simnel cake for one's mother on that day. Unlike Lenten cakes that make do without butter, eggs and milk, the Simnel cake is meant to be a break from Lenten deprivation- DISCLAIMER* (you may wish to consult a theologian on the spiritual validity of such actions as I'm only an anthropologist whose interests are in the cultural, not theological realm. Believe me, you don't want spiritual advice from the likes of myself).

Cream the butter and sugar together. Add eggs one at a time. Sift dry ingredients. Reserve three tablespoons for later. Mix the fruits well in another bowl. Stir the flour into the eggs/butter mixture alternating with brandy. Toss the fruit with the reserved flour and stir into mixture. Spoon into pan and just to be safe, place pan on a baking sheet. Bake about 1-½ hours, though mine took nearly two hours. Cool, remove from pan and cool completely on rack.

Make recipe for buttercream. Make the twelve balls first (with a few extra for mistakes) and set in freezer to be dipped. Roll out remaining buttercream and top cake. Finish dipping buttercream balls in white chocolate and set atop cake using eleven balls to represent the true Apostles (leave Judas off) and wrap in a bow if you like (hopefully you make nicer bows than I ).

Tell your mummy you love her on Sunday
Posted by Goody at 2:02 PM
Labels: Holiday Fare, Lenten Cake