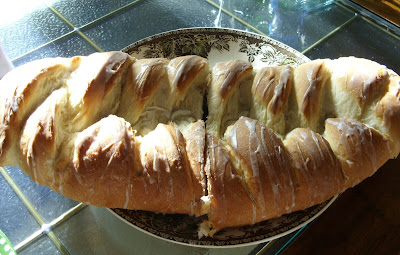 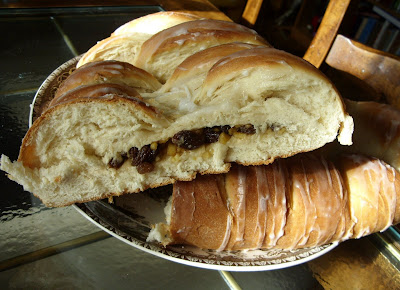 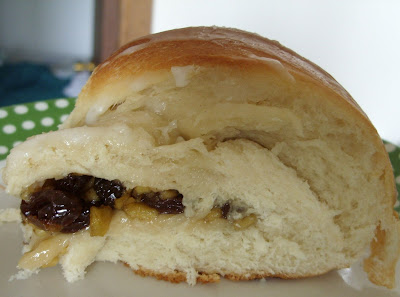 Talk about unexpected oven spring. Yes, it is as big as it looks. I actually used less yeast than the recipe called for. The ladder loaf design split, but it is still pretty. I guess perhaps I should stick to the Swedish Tea Ring, since I know it always turns out perfect.

I really have no business baking, or doing much of anything right now, and frankly I think it shows. On the other hand, I tend to be super-critical of my baking efforts whereas everyone else just notices, "Hey, there's cake." The boys really liked it, and since my taste buds are screwed-up from taking Methotrexate, I'll take their word for it. I can't really taste sweet anymore.

The filling is moist, and the cake could have gone a few more minutes in the oven, but it was browning quickly, so I pulled it out. I wouldn't call it under-baked, but I do wish the centre had been a bit drier. The Summer apples were exceptionally juicy (and tart) which might have contributed to the moisture.

I now have a gigantic coffee cake for three people. I guess I'll be giving away large hunks of it tomorrow. Really, I had no idea it would be that big.

Add yeast to cooled milk mixture and beat in eggs and butter. Add the flour a cup at a time and keep adding until dough is no longer sticky. Knead well until smooth. Place in a buttered bowl and let rise 1-2 hours or until doubled in bulk. Punch down dough and let rise a second time until almost doubled in bulk-about 45 minutes. Meanwhile, make the filling.

Mix together, boil for one minute. Remove from heat and cool before using.

After second rise, roll out dough into a rectangle 14x8 inches. Place dough on a well-buttered heavy baking sheet. In the centre, make a strip of the filling about 3 inches wide. Cut the sides into strips with seven evenly spaced on each side. Criss-cross and tuck the edges in (whole heck of a lot of good it did me) and then tuck the very end pieces under. Cover with a damp cloth and let rise for another 30 minutes while the oven preheats to 375 degrees F.

Mine baked 25 minutes, but do keep an eye on it and maybe poke a toothpick in the centre to see if it is baked through. Remove from oven, transfer to a rack and then place the rack over another baking sheet. Make a glaze of confectioner's sugar and a bit of water and pour generously over the still warm cake. Let cool completely before cutting.

Hm.. I have a bunch of mincemeat that's been sitting in two 1LB tubs in my fridge forever (bought it to cook with pork). I wonder if I can do something like this with it. But I just dunno about all the dough business. Any ideas for some kinda more cake-like, less bread-like, dessert w/mincemeat?

Oh, and regarding not being able to taste sweet: hey, Beethoven couldn't hear. Yet you both create masterworks!

You are too sweet. You know that? Sweetheart. That's you.

I do have some mincemeat recipes (bars, I think) and I'll look for them this weekend. And next time, if you need mincemeat, just ask and I'll send you a few jars.

I'll check out these recipes. But I'm still on my diet (dammit.. can't get below 190.. for like 2 months now - but popping up to ~194 happens with NO effort). Still dieting, so I'm gonna be careful with the pastry desserts. Plus, cooking with dough - yeast, sifting, rising, etc - I know I'll never do all that. Maybe mincemeat used as some kinda sauce? That'd be more my style. Hm.. would mincemeat (w/some alcohol, maybe?) be good over beets? *pondering*