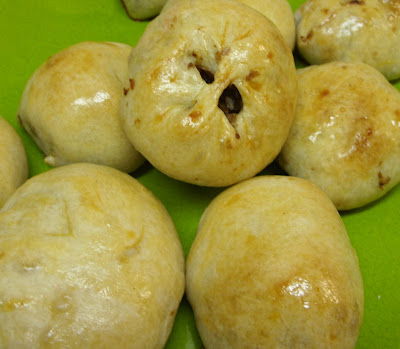 I should have photographed them cut, but duh-I forgot. I added the filling in layers-kasha and mushrooms, carrots, and a few potatoes on top. They looked pretty when cut. I've made knishes before and you can see those HERE. I've also made kulebiaka with similar fillings HERE. The dough was new to me, as was the rolling and filling technique. You can find that recipe HERE, though I did not use the filling in the recipe.

Oh, I know what you thought when you clicked that link:
"What the fuck does Emeril know about knishes-he's a townie from Brockton?" I thought that too, but then I got all distracted by the whole "Essence of Emeril" thing which makes me think of a sweaty Portuguese guy in chef's whites. BAM!

I didn't have any, but the boys ate quite a few between them so I'm taking that as a positive review. They certainly were pretty. The dough was about as simple as it gets-almost like a pie crust made with oil, but rolled much, much thinner. I'm really skilled with a rolling pin, but if you're not, this might be an exercise in frustration.
Posted by Goody at 6:03 PM
Labels: Carrots, Jewish food, Kasha, Knishes, Pastry, White Potatoes

Makes me long for knishes from the Yonah Schimmel Knishery on Houston St, Lower East Side, Manhattan. *LOVED* those things! Perhaps my fave store (2nd to the Russian deli's of Brighton Beach) in all of NYC.

I like that you added many ingred's to these. @ Yonah Schimmel's, they make just w/ kasha or potato, or mushroom, etc. So I'd buy many of each.

You brought us some back once and they were really good. I can't remember what kind, but I also recall they were huge things, much larger than what I make.

I can't really imagine making kasha without mushrooms-sort of like eating beets without rye bread and sour cream. Some foods just make so much sense together I can't understand how anyone ever thought to combine them otherwise.

I bought the world's largest head of cabbage today at the farmer's market. That was worth getting up at 6 AM and driving all the way to Omaha. Expect some sort of cabbage-roll-thingy soon.

I'll get back to you with the mincemeat post later.

Did I also bring back some kosher wine? I kinda remember that. I loved that store: Shapiro's House of Kosher Wines (Lower East Side). The proprietor was a wacky kook (in a good way). A big talker and lots of fun.

Anyway, here's a pic of a guy with big cabbages:

He looks so proud of them too-I mean, look at the guy.

Don't remember the wine, but L. thinks he does.