I thought you might enjoy a look at some birthday cakes from the past decade (There were half-birthday cakes as well, but we'll save that for another post). To long time readers of the blog, you can feel free to skip ahead.

First
(Minimal decorating skills, but look at that happy baby!) 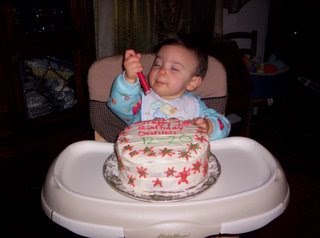 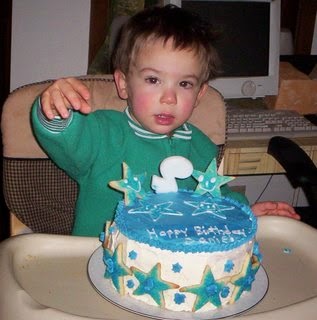 Fourth  (Cars)
I made dozens of those cookies until I got enough perfect for the cake. It took weeks. The cake was an orange sponge with fig filling. That was the last time I did anything exotic beneath the icing. 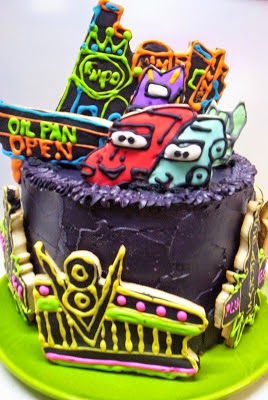 Fifth (The Day the Earth Stood Still)
Never. Doing.This. Again. EVER. Hundreds of decorated cookies, the Washington Monument from sugar cubes, and the spaceship. INSANE. Still, Danny loved it, and it was one of his favourite movies at the time. The original. For fuck's sake, I shouldn't have to point that out. 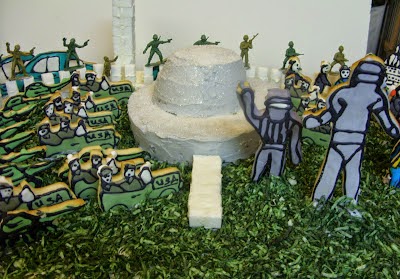 Fifth (Science)
What you can't see is how the sugar on the light-bulb really sparkled making it look like glass. I'm glad I did this cake pre-energy efficient bulbs because I don't know I would do those swirly bulbs in cake. 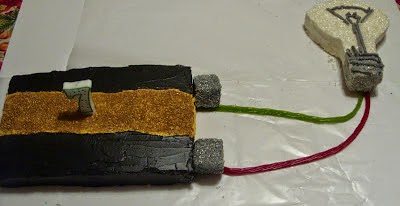 (And the entire Periodic table in iced cookies)
I can't say enough nice things about those food colouring pens. I can't imagine piping this in icing. 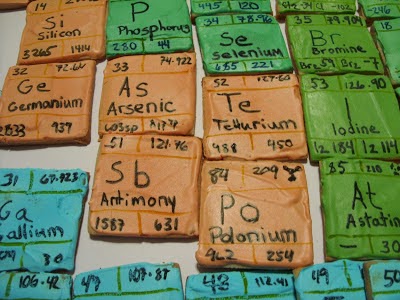 The Siege of Troy
Arrgggh. This cake gave me so much trouble. The icing wouldn't set, the cake fell apart, and as Danny likes to tell it, "There was some swearing I heard when I was trying to sleep." Yeah. But hey, the black and red pottery warriors came out well. There were also golden "Mask of Agamemnon" cookies on sticks. Those were cool. That was the year Danny wanted a copy of Chapman's Homer. I found him one, but it wasn't easy. I ended up ordering it from Waterstones. Thank goodness for the Internet and overseas shipping. He's still amused by it-Chapman was a bit of a blowhard, and it makes for good reading (but not in any way, shape or form a good translation).
There was a Greek Mythology quilt that year. 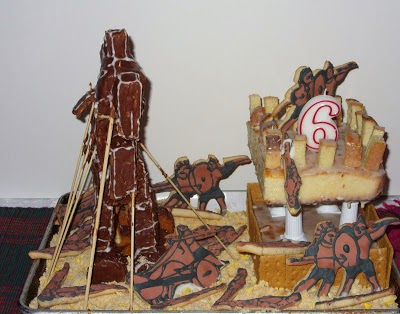 The Trojan horse in cake sounded like a good idea at the time. 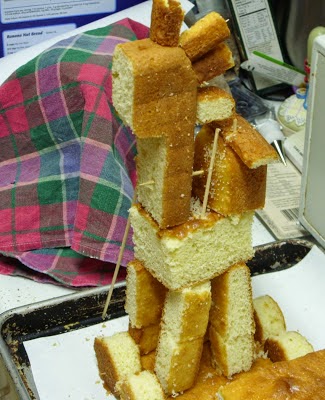 Sixth-Monopoly, with iced cookies for the properties
(There was a Monopoly quilt to go with it). 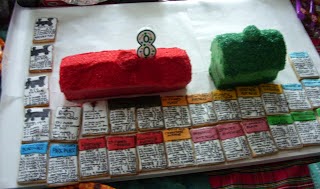 Chilly Willy the Penguin
(This was the year Danny went crazy for Woody Woodpecker and his friend, Chilly). 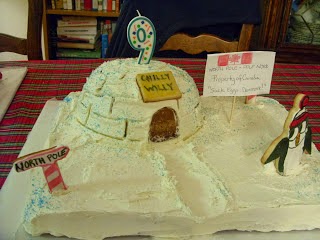 With current events added to keep the cake educational 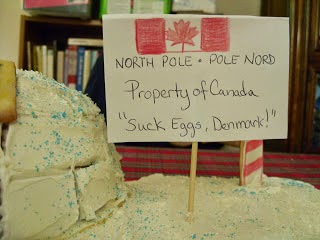 And finally, this year when I asked what Danny wanted for his Birthday cake, I got a response straight out of last semester's study of WWI with a Christmas theme as a bonus. 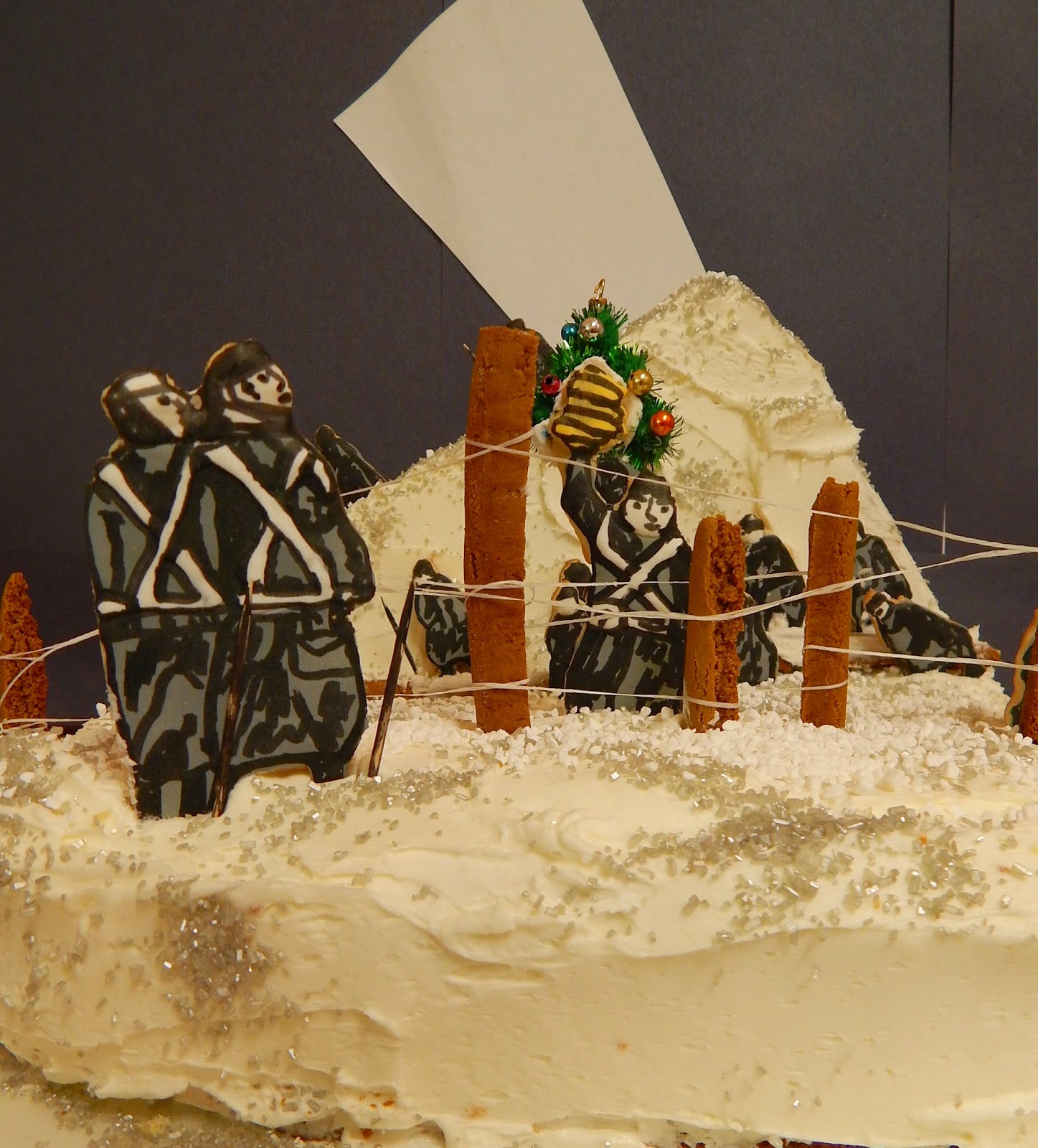 Pro-tip: dental floss makes convincing barbed wire, in a pinch. I skipped the football and went for the iconic drawing that appeared in newspaper accounts of the truce at the time. 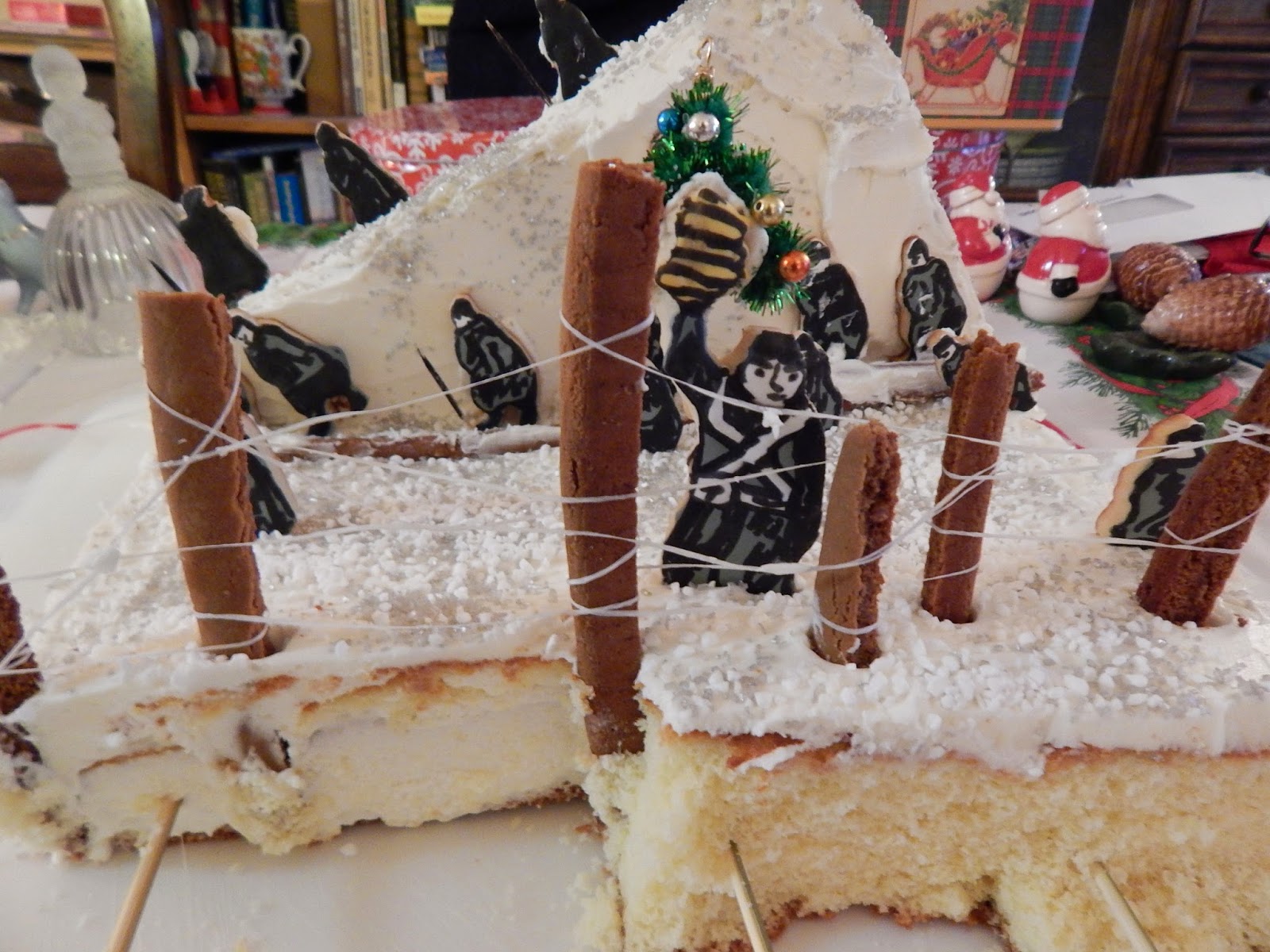 When constructing a cake like this, skewers are your friend. I baked the cakes well ahead and then let them chill making slicing into shapes easier. This is two 8x11 cakes. The fence-posts are gingerbread scraps left from the gingerbread house. To decorate the cookies, I iced in white and grey with royal icing then used food colouring pen to draw on the details. The Christmas tree is an old earring. When making a cake that needs to withstand this sort of assembly, I use a recipe that is all butter and egg yolks. It is a firmer, sturdier cake that still tastes nice against the very rich decorator's buttercream icing. There's a time for fancy layer cakes, but Birthday cakes aren't it. 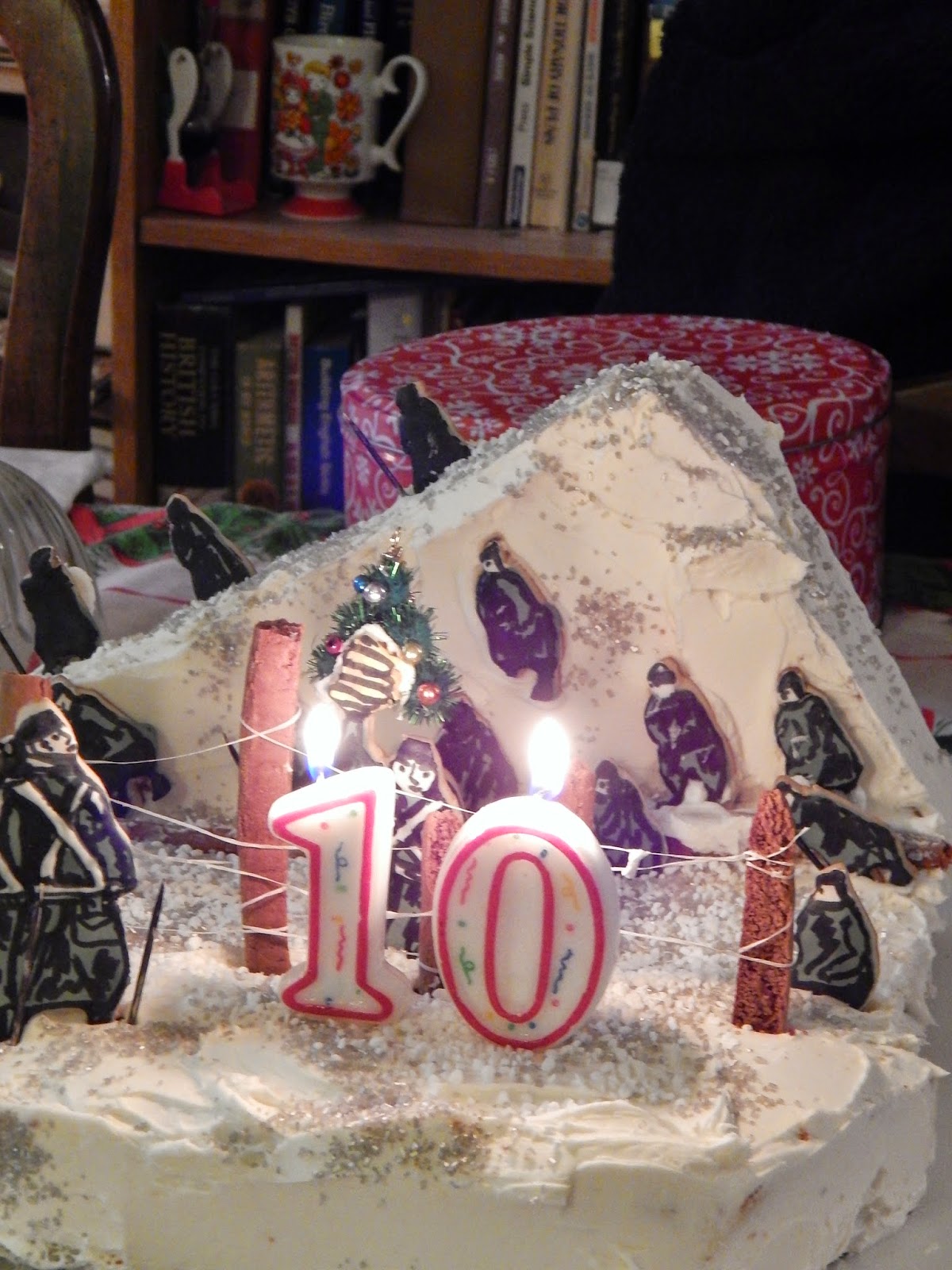 I wanted to keep the cake as respectful as possible (Acknowledging that trench warfare and cake don't typically go together). I understand the cynical impulse to mock the Christmas Truce, but I just can't. Of course it has entered into folklore 100 years later, and there probably weren't any impromptu football games in the No Man's Land, but that doesn't diminish what the Christmas Truce has to say-there were human beings in those trenches who'd been trying to kill each other, and for a day they acknowledged that, and were able to see each other as such, rather than a dehumanised, "Enemy." I tried to keep that in mind as I made the cake. 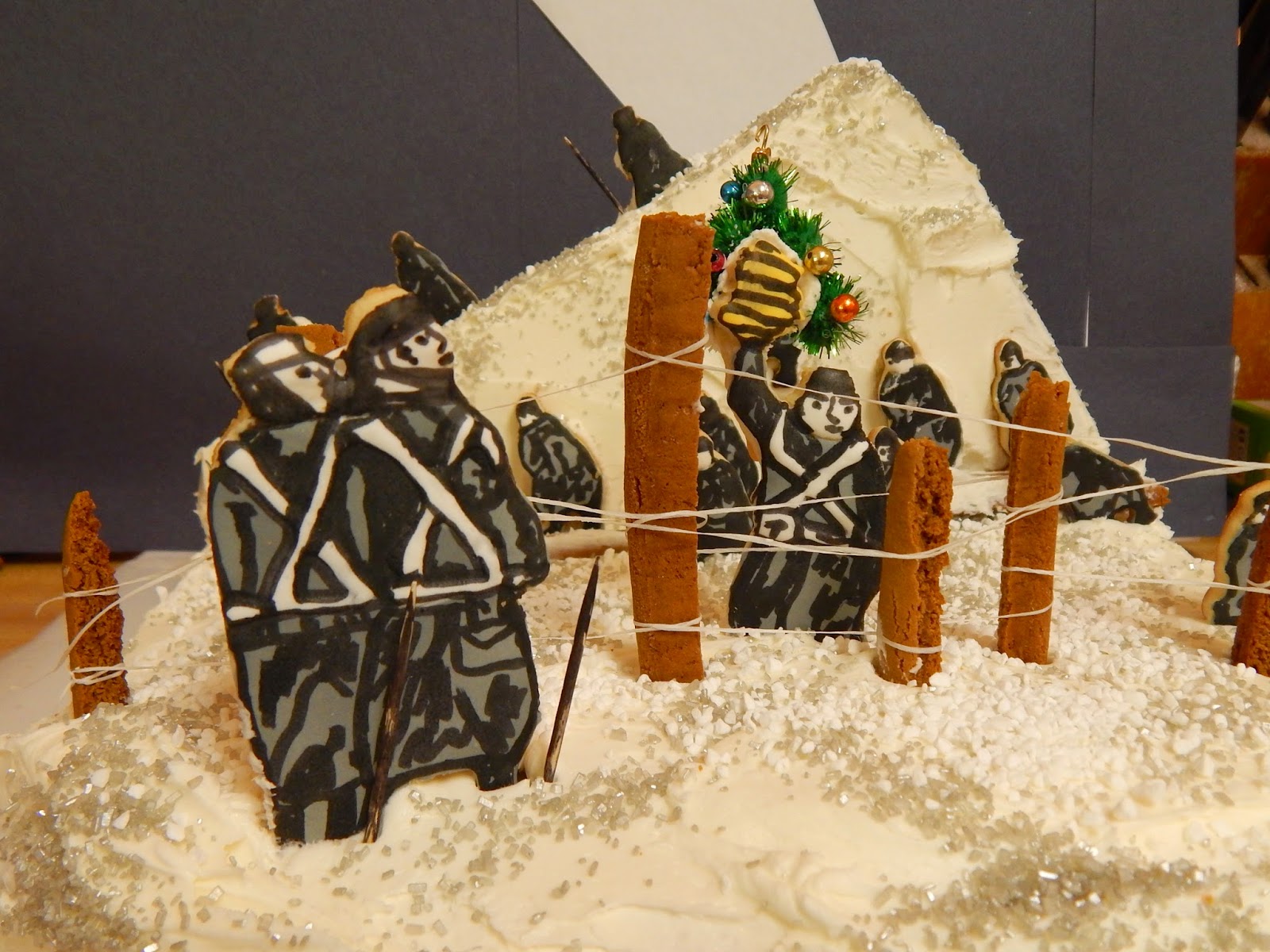 I wonder what I'll be baking next year?

Daaaaaaaaamn, these are incredible. Boy doesn't know how good he's got it.

My husband hates birthday fuss (his traditional cake is a slice of banana cream pie from the soul food cafe on the next block) and I have no kids, so Casa Propagatrix is lacking in baked creativity. But I did once bake a package bomb cake for the opening of a play about Ted Kaczynski. It was my one and only foray into cake art and it was spectacular.

OH MY GAWD!!!!! Goodie. These are awesome. I am truly inspired. Oiks. I have no words.

Whoooah, there is a heck of a lot of love gone into those cakes over the years. Truly magnificent. . .

Queen of birthday cakes please step forward!! You put my efforts to shame.

Was the periodic table from birthday number seven? Also, this is the first that I recall seeing the monopoly cake. That's my favorite! Is it possible that I've been reading your blog for this many years? Time flies. Happy number 10 to that kiddo of yours.

@Propagatrix
If that was the only cake you ever baked, you sure made it epic. I know I shouldn't laugh but still...

@Curtise
You're not an idle mother (I've seen the blog evidence of the adventures you take your children on-sculpture park, anyone?). The cakes are my idea of fun (again, "Mostly"), but I'm not sure if that is a personality flaw or not. I'm not typically obsessive until it involves sugar and butter.

@Jayne
Yep, love is right. I wouldn't bake the Periodic Table for just anyone ;)

@Sue
I don't know about that. Seriously, I hope you're joking because I would never want to make someone feel like their birthday cakes were anything less than wonderful. Believe me, I've pulled things from the oven I wouldn't show on the internet, but they were baked with love. I'll bet your cakes are lovely-I've seen your rainbow creations and I could never make anything that spectacular.

@Janice
Yes, that was #7. I'm not sure what happened to #3? It was tractors in a field of grass. I'm sure I have photos somewhere. The Monopoly cake was baked twice as we lost power the morning of his birthday and he only got to eat a couple pieces (It was an ice storm and the power was out a couple days-we went to a hotel). So I re-made the cakes when we got back home. We've been blog friends from way back haven't we? At least before the tornado, I think.