The menorah Danny's using has been in our family more than fifty years. 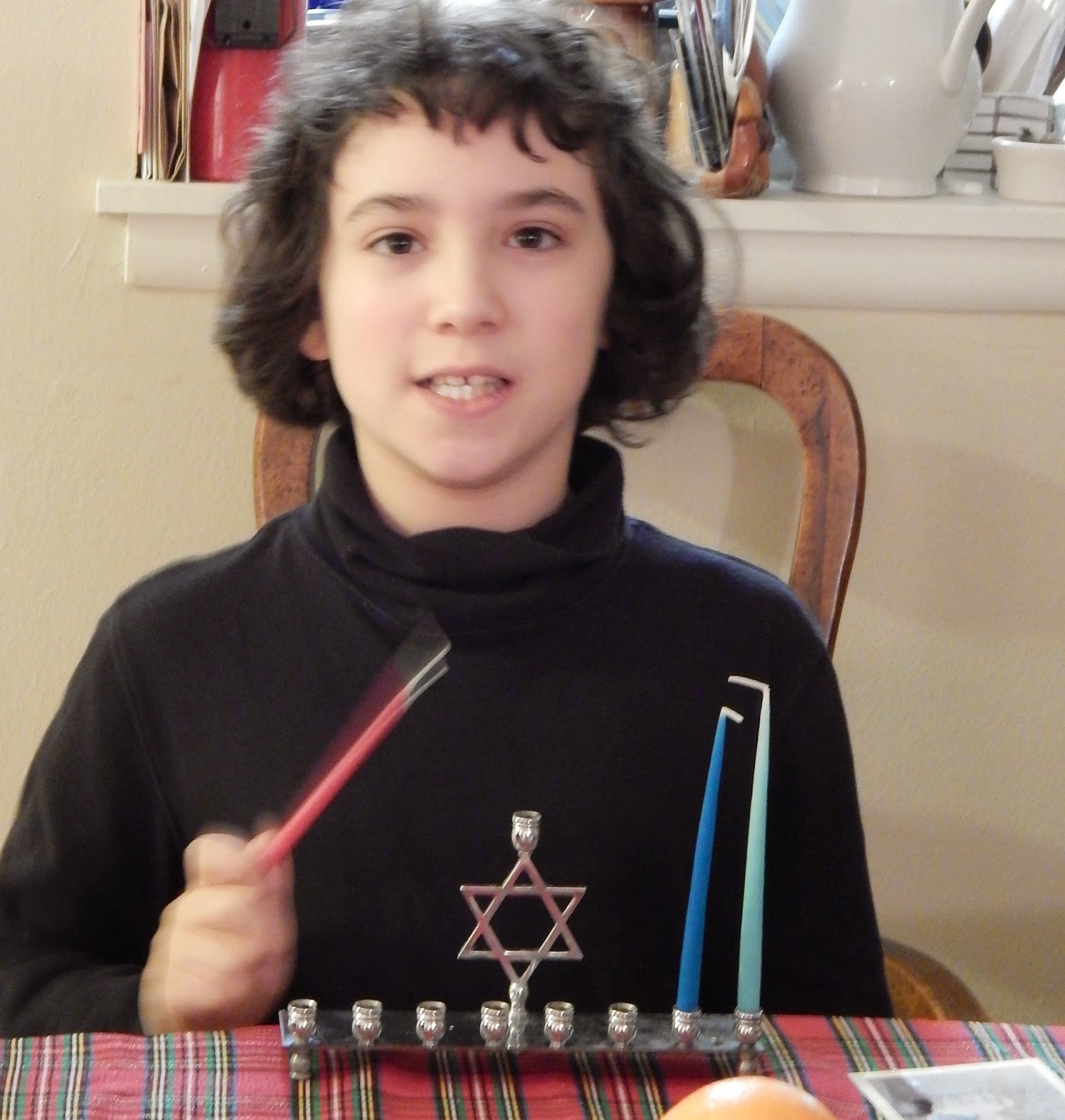 Here's a photo of my sister lighting it circa 1960. Dig that wallpaper (click photo to enlarge). It was eventually replaced by gigantic op-art orange flowers. There's a reason Judi's hair is so short. Our mother would go to cut our fringe and then want to, "Even it out a bit." Half the time we ended up looking scalped. This looks like one of her better efforts. It doesn't even look like her-for a minute I was sure it was our youngest cousin, but she would have been too young to be trusted with candles at that point.  I remember that table too-it was a foldaway we kept for parties as our kitchen table was round and only seated four. Every gathering, the metal table with the laminate wood grain would get shoved into the kitchen or living room at some strange angle so that some poor soul at the edge would have to contort themselves getting in and out of the seat...but we always fit everyone in without resorting to the dreaded, "Children's Table." 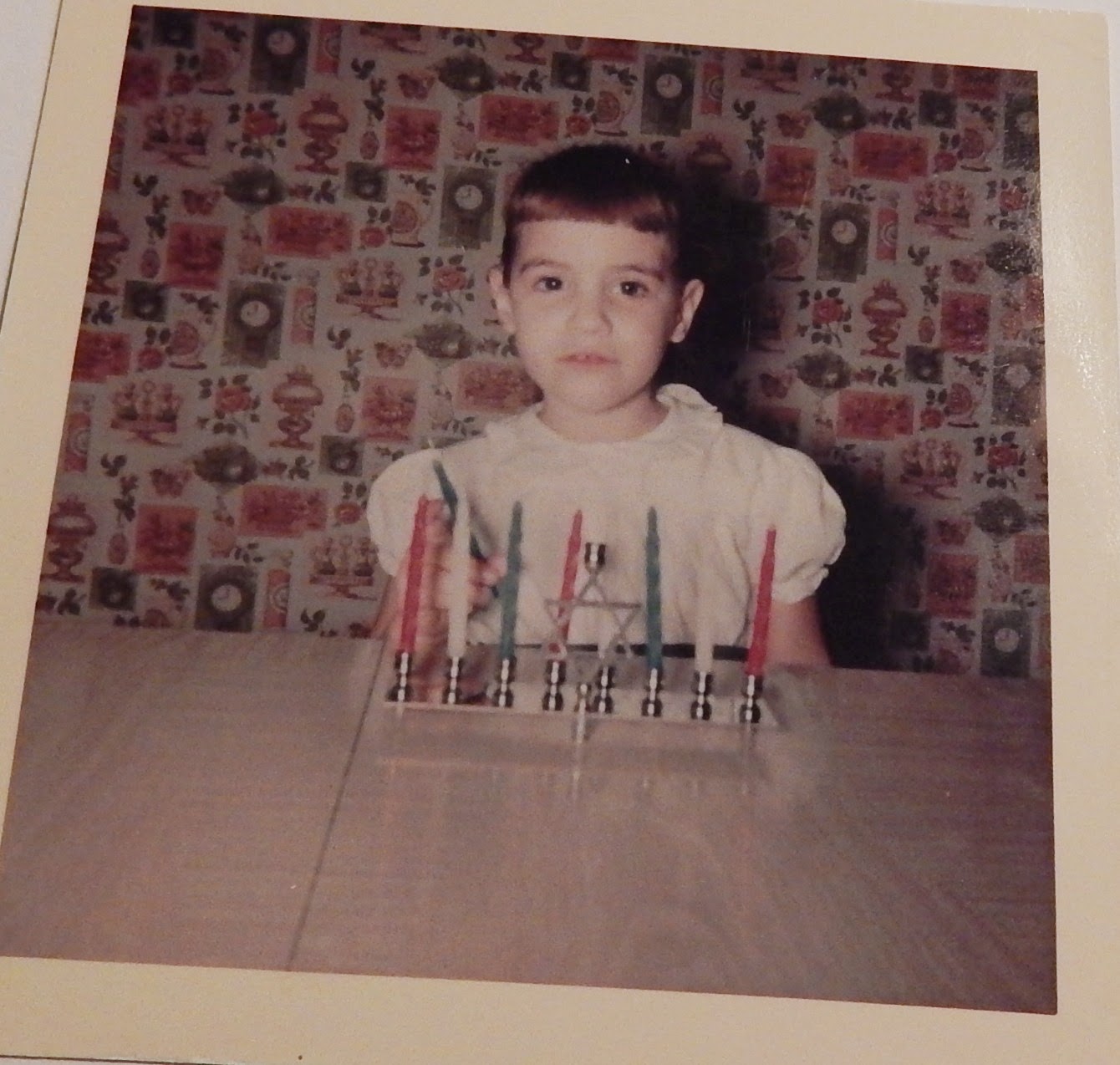 I always wanted an electric menorah where you just screw in another bulb for each night, but I've yet to buy one. I'll have to check the sales in January for one. 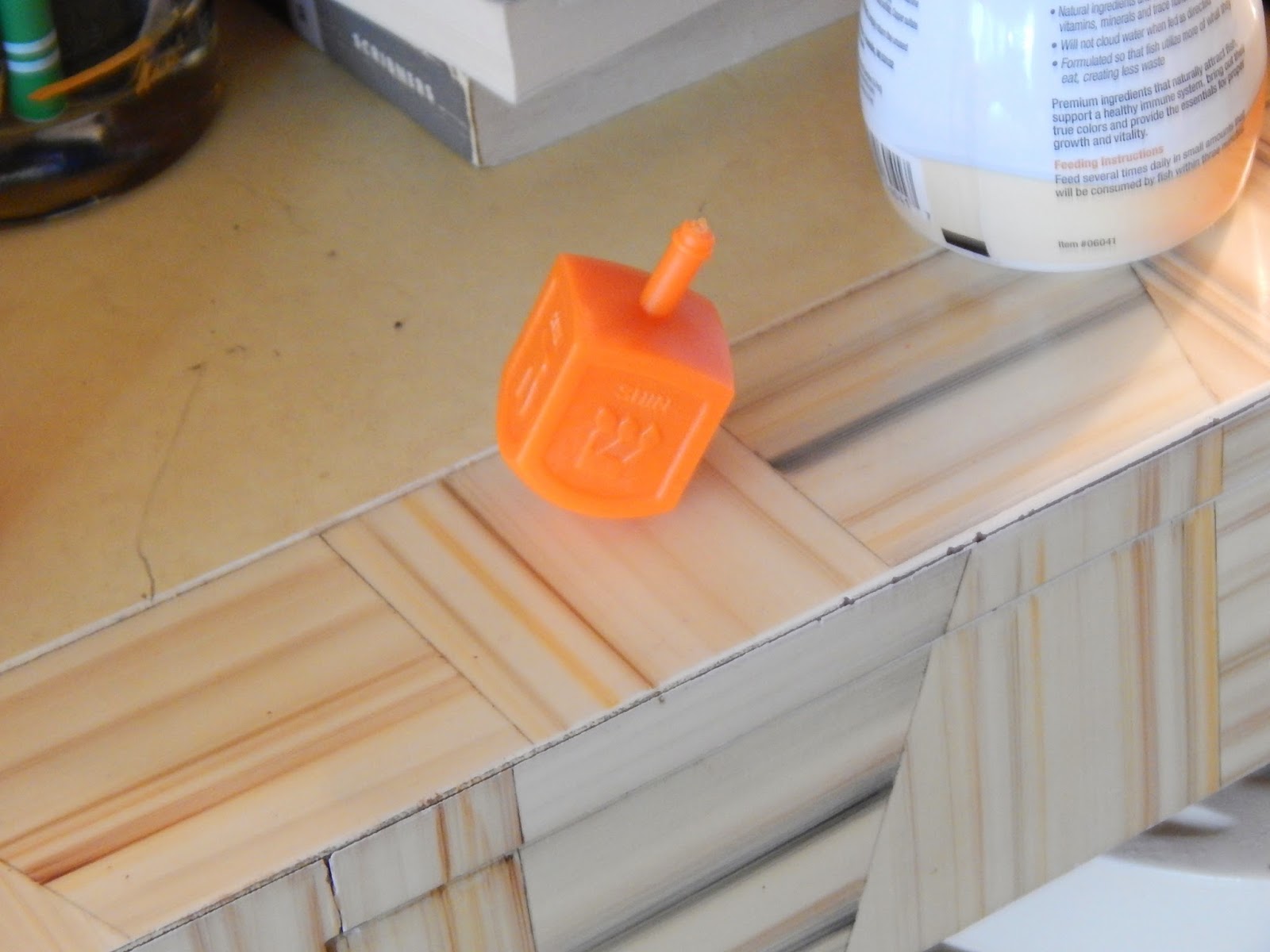 I have no clue how Danny managed to get the dreidel to balance long enough for a photo-but he did. 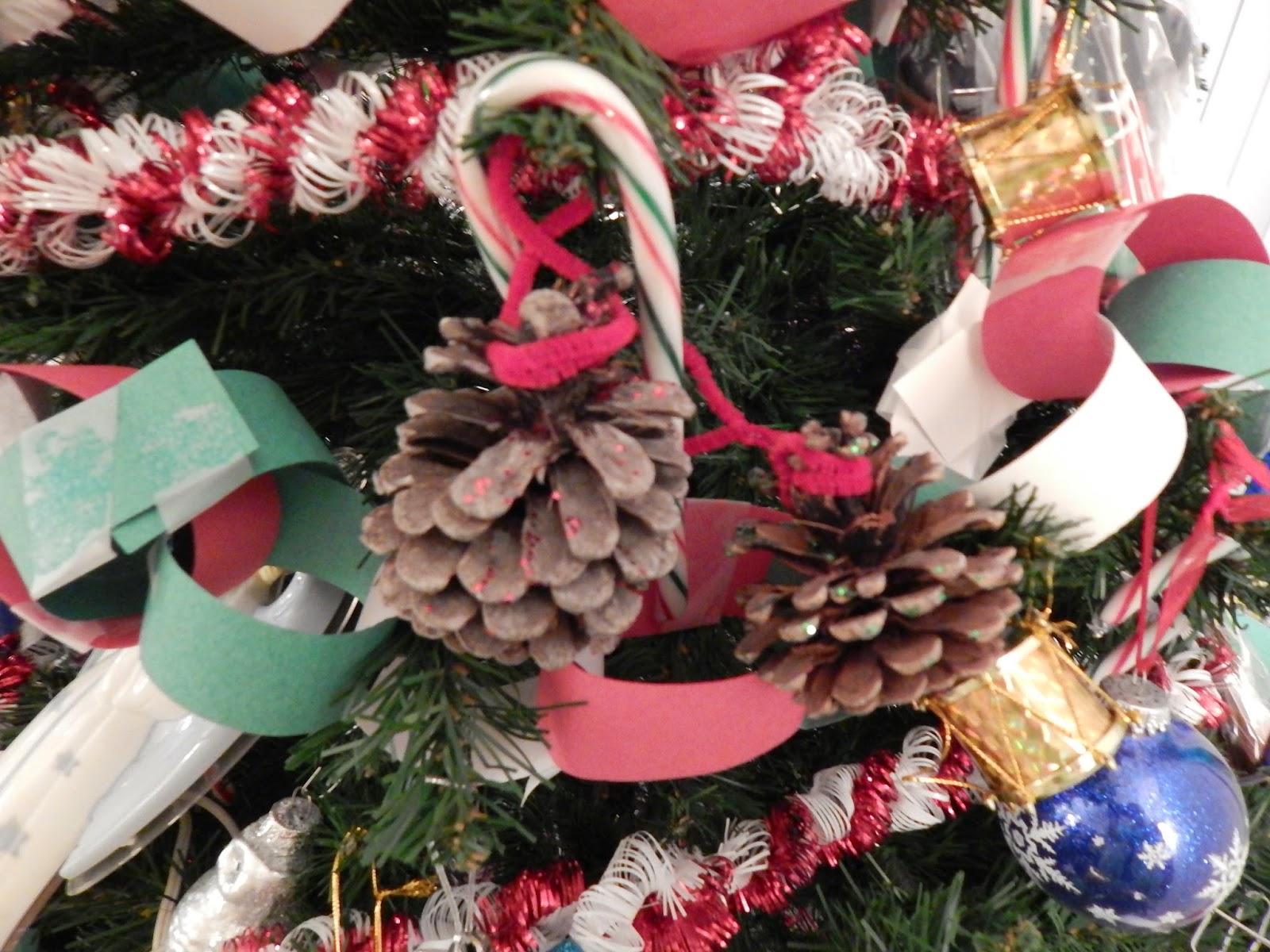 We've saved some older Christmas ornaments as well. These pine cones have lost most of their glitter, but I still remember the warm autumn day when I took two year old Danny to the park to collect them. We went home with a large bag, and went crazy with glitter and glue. 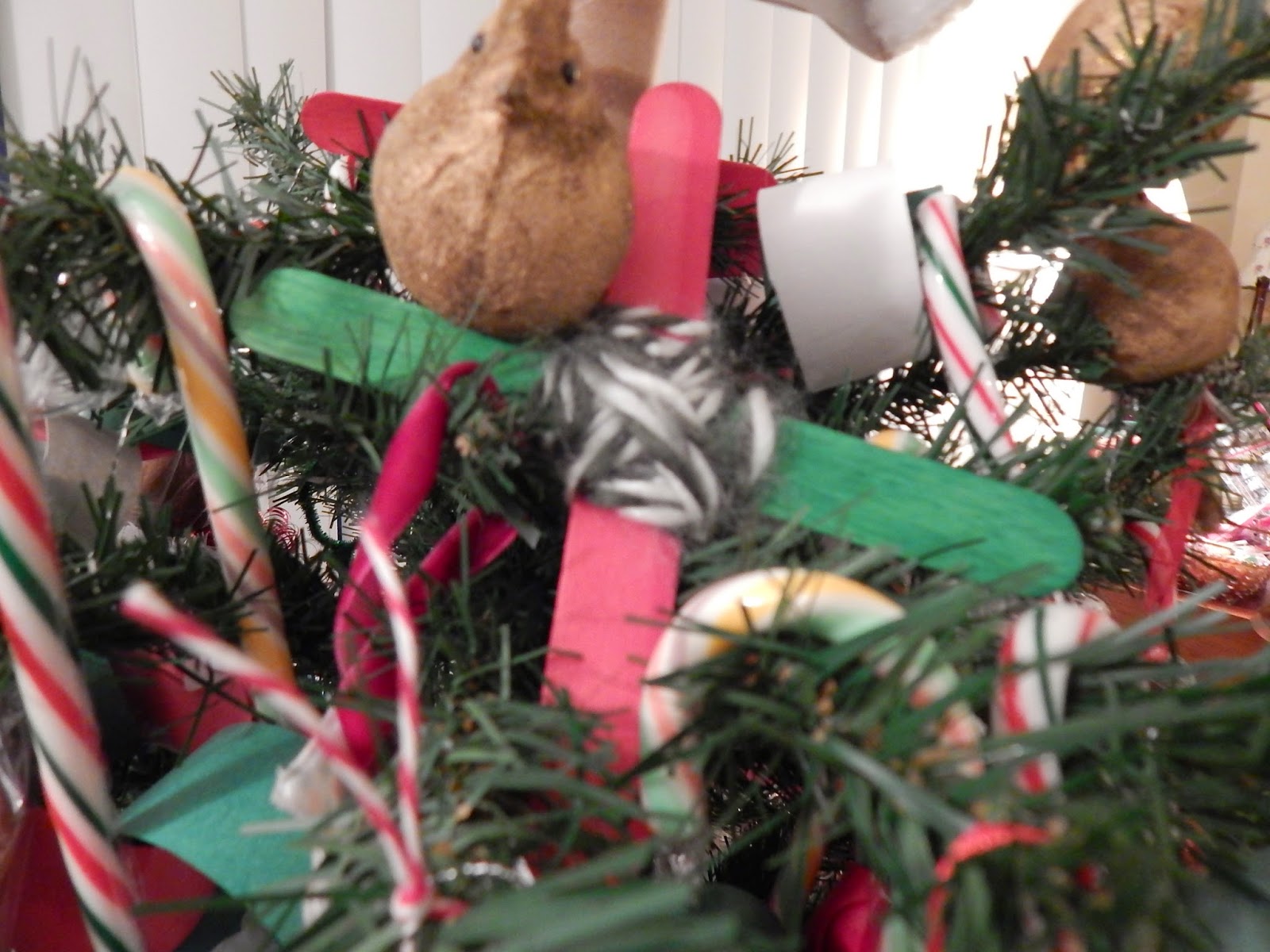 Not long after the pine cones, Danny made this Godseye from craft sticks and yarn. 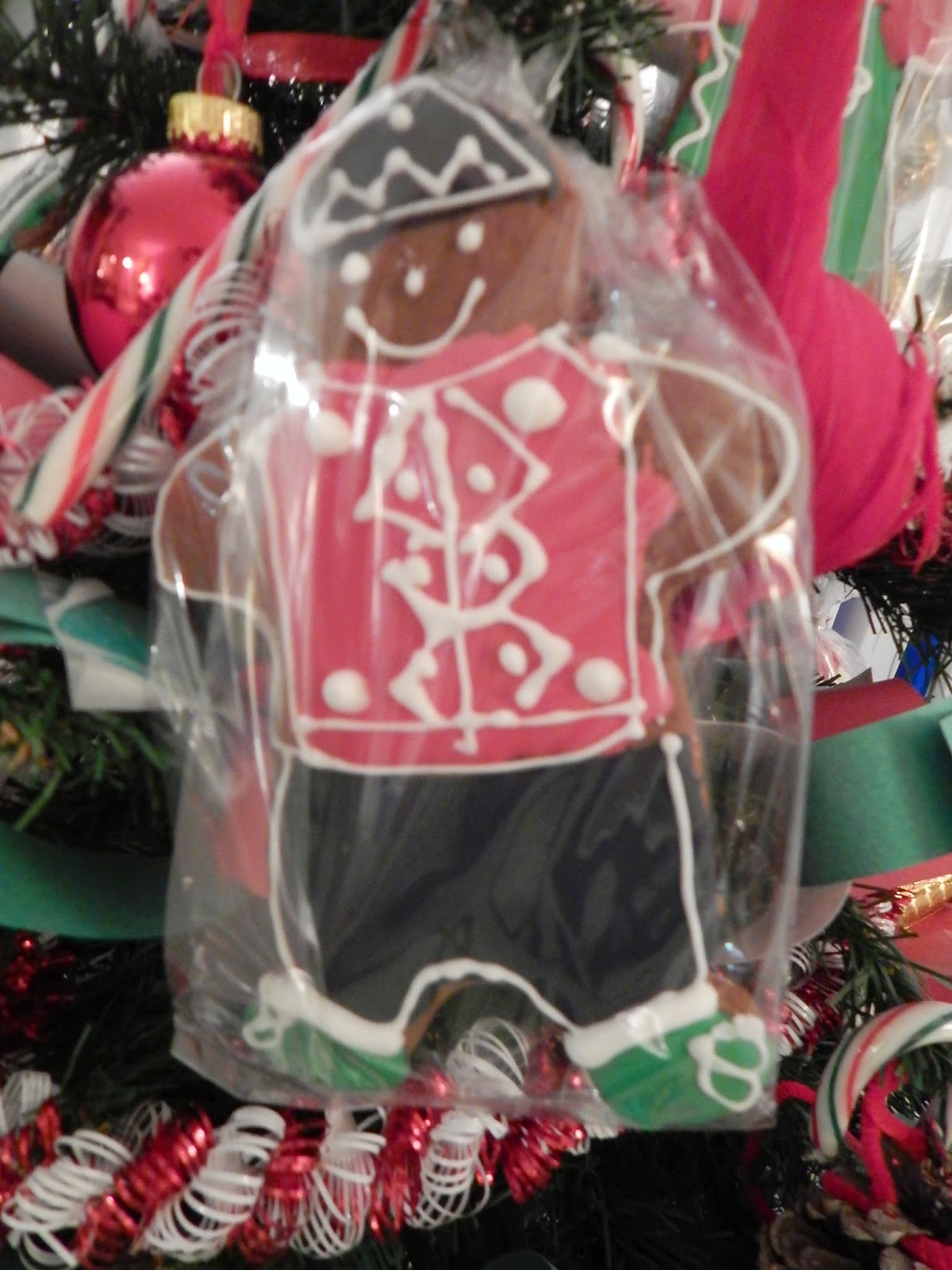 Each year, we adorn our tree with gingerbread men that Danny decorates. The copper cutter is really a clown (notice the pointy head) but he's been in my family since my mum was young, and I can't imagine using anything else. I do remember the first time it dawned on us that it was a clown, not a gingerbread man. My mother looked at him (after struggling to roll out some very stiff dough) and remarked, "I wonder why the gingerbread man is a pinhead?"  Ah, memories. 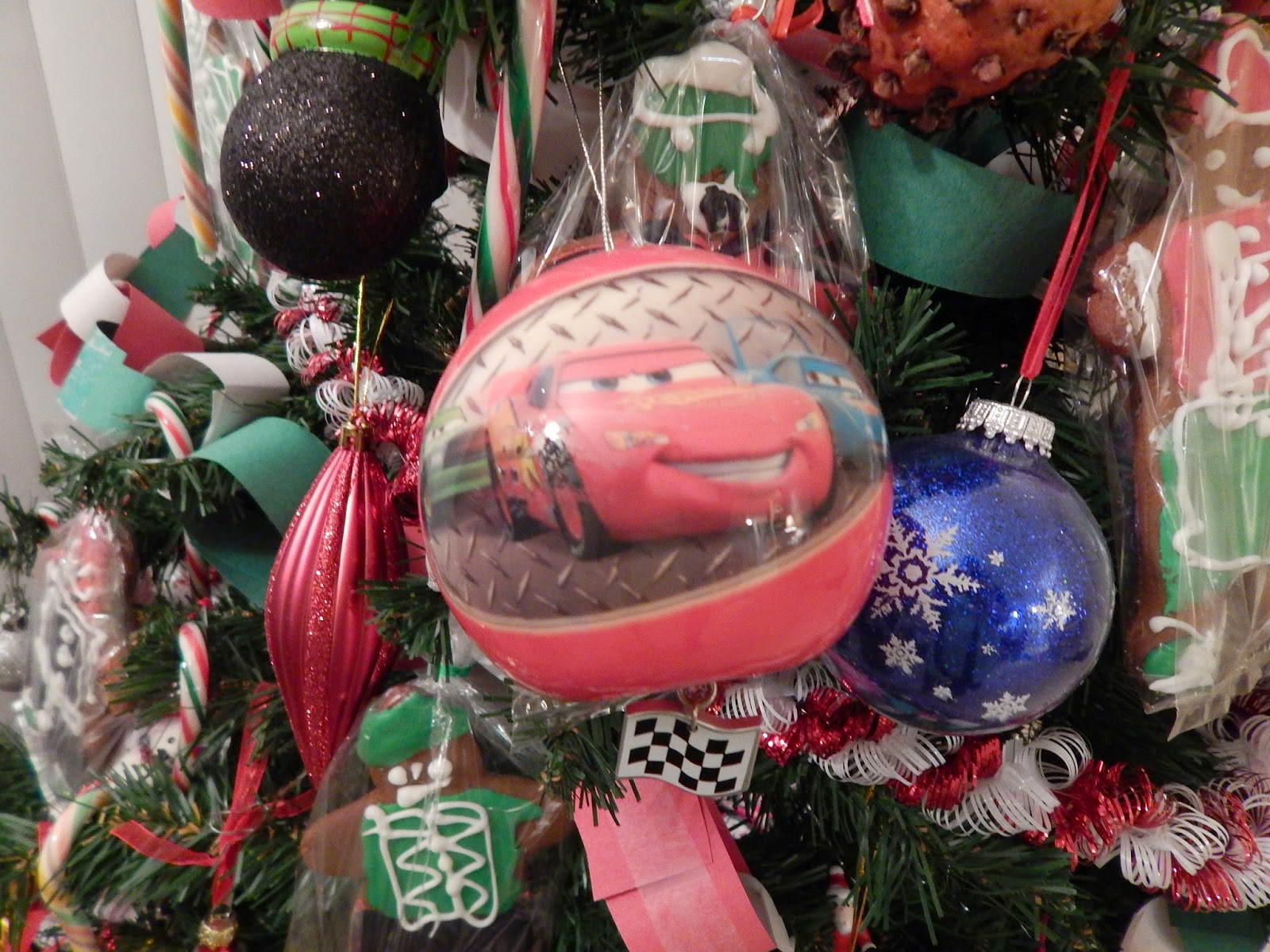 The Cars ornament was a gift from our insurance agent. After the tornado in 2008, we were at the office a few days later filling out paperwork. Danny was still in a bit of shock at the whole thing (as were we) and she wanted to do something nice for him.
"Danny, do you like the movie Cars?" She asked.
He nodded that he did. Di went to the cabinet, and brought out this ornament, left from the previous Christmas. Let me tell you, he clung to that ornament through the hotel stay, and all the clean-up and putting back together at home. The following Christmas, Danny got his first tree, and this was the first ornament hung. It was just a silly, plastic ornament, but it meant a great deal to him then, and it still does hanging front and centre on the tree. 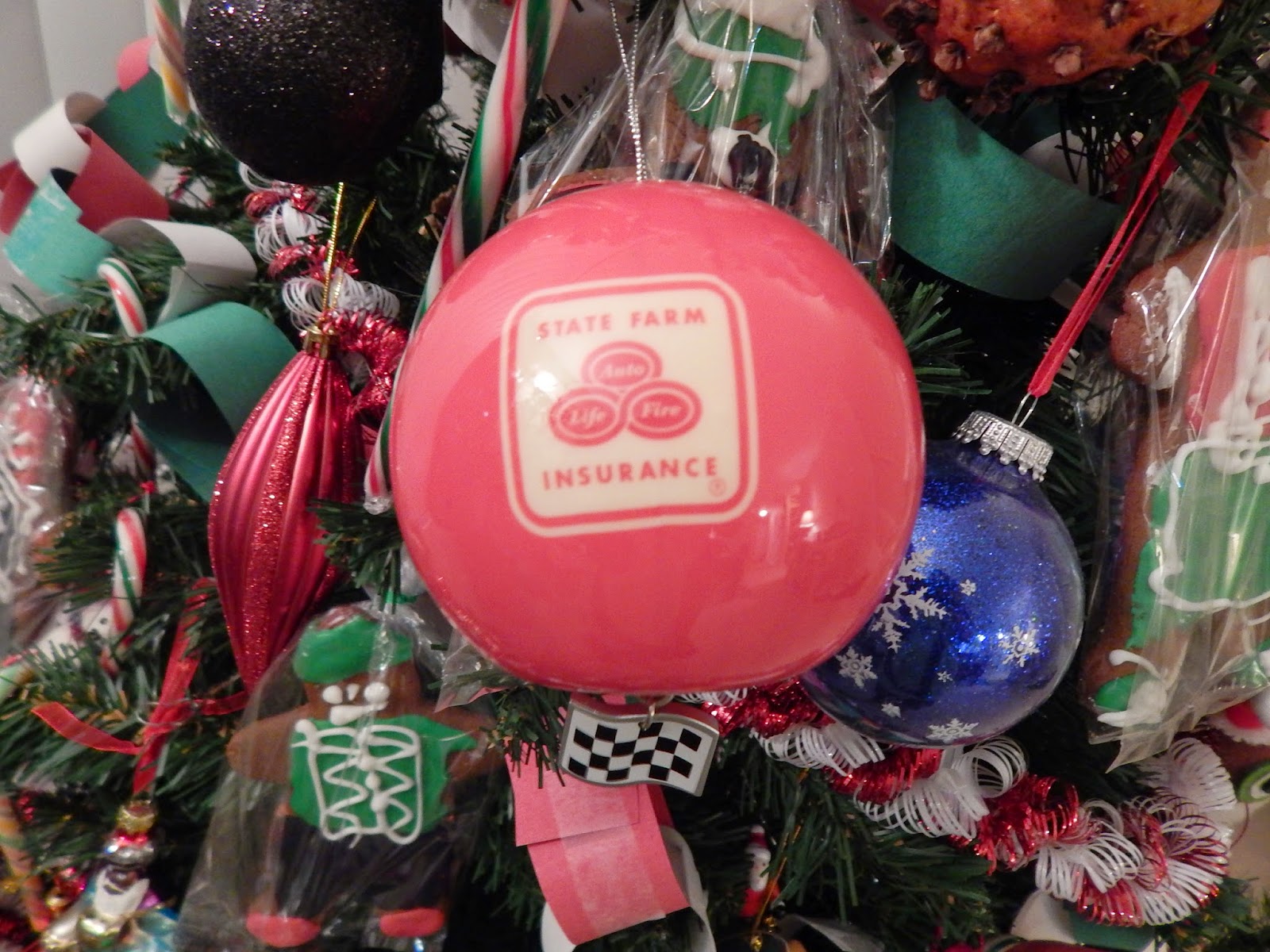 Living up to the, "Like a good neighbour" slogan. 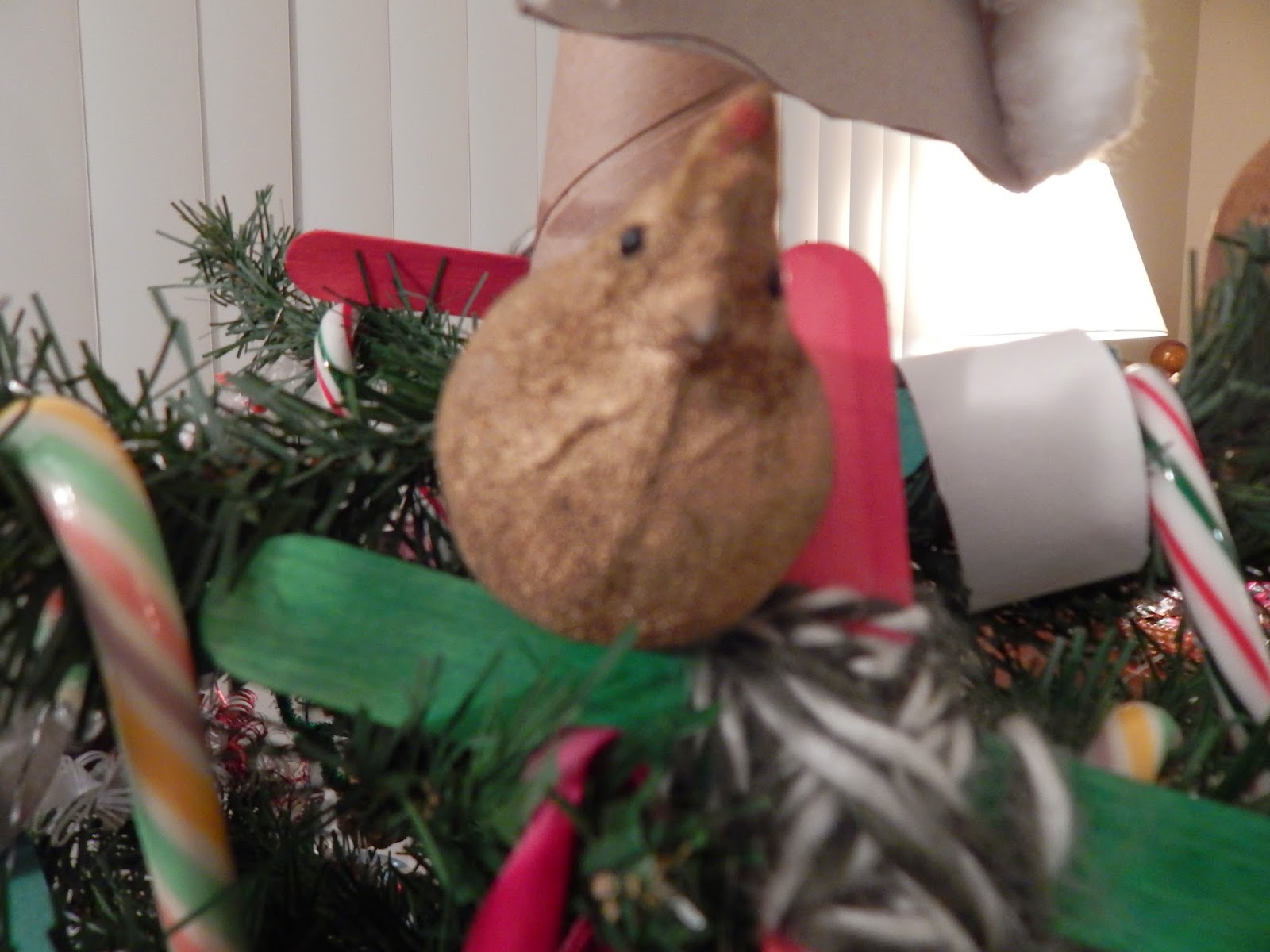 Of course our tree is filled with birds. Sometimes I wonder what the birds at the feeder think peering through the window at all the birds on the tree. "They get gingerbread?! I'm going to get those bastards."

We got to talking about what my favourite holiday presents were as a youngster. Strangely enough, I don't remember all that many presents as I think most of the time my parents just gave us money. The things that stick in my memory were the strange gifts, like the year I was eight, and my mum bought me a Frank Zappa record. I don't know why either, but after a few weeks of listening to, "You're Probably Wondering Why I'm Here" I'm certain she regretted it. I'm sure she didn't regret it as much as the Revolutionary War reproduction fife the following year. I never did get very good at playing it without screeching. I gave it to a neighbour's kid when we moved from Boston in 2001. I doubt he ever got good with it either. One Christmas, I woke to a 10 lb. candy cane sitting on the piano bench (we didn't have a fireplace at that house). I suspect it was a gift from one of my dad's customers. We had to chip at the thing with a hammer to get pieces of candy, which was fun until Valentine's day rolled around and we were sick of looking at peppermint. I'm sure it was binned shortly after, and I regret not having a photo of it as I've never seen another like it. One year someone made us matching crochet granny square vests out of pink and white angora. I never wore mine-I can't imagine my sister did either. Then, there was the year my dad brought home a balloon, and a bottle of Benedictine. I was ten. I think he forgot it was Christmas eve, and kind of panicked and bought the first thing he could find at his last customer of the day. Can you imagine presenting a child with a bottle of booze today? Yes, it was a very small bottle, and the drinking age was much lower than it is now, but still. I tried some to be polite, I remember it as medicinal. B&B would have been an entirely different story.

Keeping with the tradition of odd gifts, Danny looked at the strangely wrapped Hanukkah gift tonight and asked, "What is this, some sort of prosthetic leg?"  He couldn't have known how close he was, as once the wrapping paper was off it revealed a theatrical pirate's hook that you can wear over the hand. Mr. ETB bought that one. It wasn't a bottle of Benedictine, but it was close.

Now you share-what's the strangest thing your parents ever bought you?

My parents never gave me anything strange, but my father's mother had a knack for things that were just a little...off. When I was about eleven, I was handed a Grandma package and joked, "It's probably a plaid shirt trimmed with lace." Which is exactly what it was. Sadly, that was the one and only psychic experience I ever had, as evidenced by my romantic and employment histories. Merry Christmas anyway.

Happy Hannukah! How lovely to have a piece of family history to bring out each year.

I don't remember ever getting anything strange for Christmas. Well, one year I got a torch, but my mum was a single parent and my little brother too young to understand she bought the presents, so I asked for the only cheap thing I could think of! I didn't actually want a torch...

My friend got given a frozen chicken (in soggy wrapping paper) from her Aunty Cath when she was about nine. When quizzed as to why she thought it was an appropriate present, she replied "Well it's so difficult to know what to get them at that age!"

Ahh, happy memories. Didn't every kid with a scissor-happy mother end up with a fringe like your sister's? I know I did...
I can't think of any particularly odd Christmas presents from my parents. I do have a vague recollection of always feeling slightly (ungratefully) disappointed. I think I may have asked for a dog one year, and got a china figurine of one instead, but that was fair enough, I'd have been fed up with a real one the first time it needed a walk when it was raining.
Btw, I am horribly behind, so I just need to say that you and Danny looked fabulous on your trip to the ballet! xxx

The first thought that came to my head was when I was about 8 or 9 and we had a gift exchange at school. My mom had me wrap the present in used wrapping paper and I told her I didn't want her to do this but she told me no one would notice. So, I get to school and of course all the kids got on to me for wrapping a present in "used" wrapping paper lol. For the most part, we didn't get many presents for Christmas like they do today. In England, when I was a kid we wouldn't use red thick stockings like they use now, we used old pantyhose and them filled with fruit and a couple of chocolates but these were fond times! This is also so great that you show the past and the present photographs. How funny of a story about your sister's bangs because I can totally see this being a mom thing!

No mother should attempt to cut their kids hair unless they are a hairdresser! I had some disastrous fringes when small and even did some slightly on the piss ones on my boys. Max reckoned he used to tilt his head for months to make his hair look straight!! Love Danny's decorations.