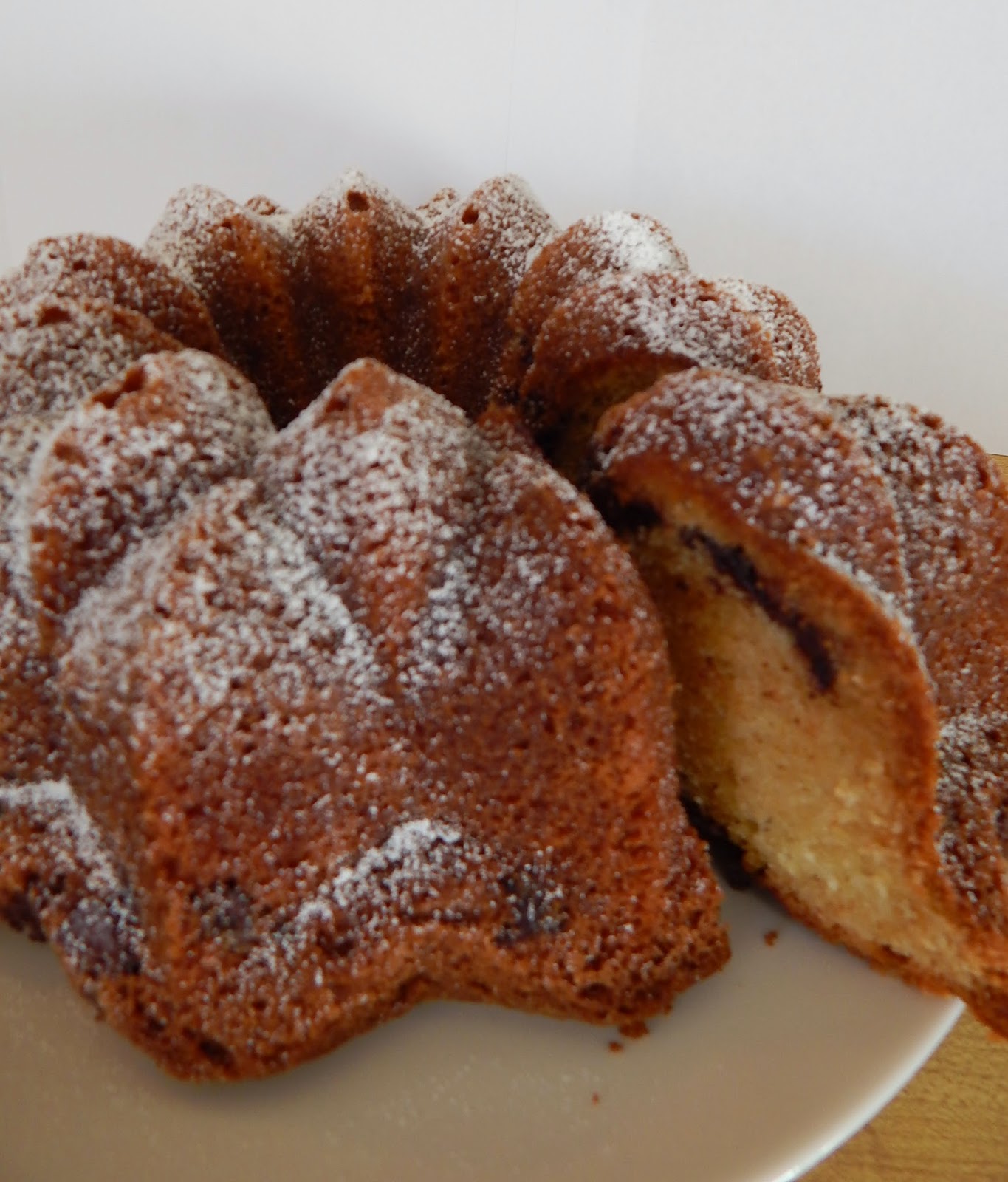 Our temperature reached an unseasonably warm 65 degrees F. at our weather station today (and that was in the shade). No wonder we're all sick! Sub-zero one week, tropical the next. Danny's over his cold which is good because I've been hit with the flu. I don't think I could manage all of us being ill at the same time. This cake is so easy to make, you can do it half-dead with influenza. Seriously. The recipe comes from a wonderful old cookbook from 1971 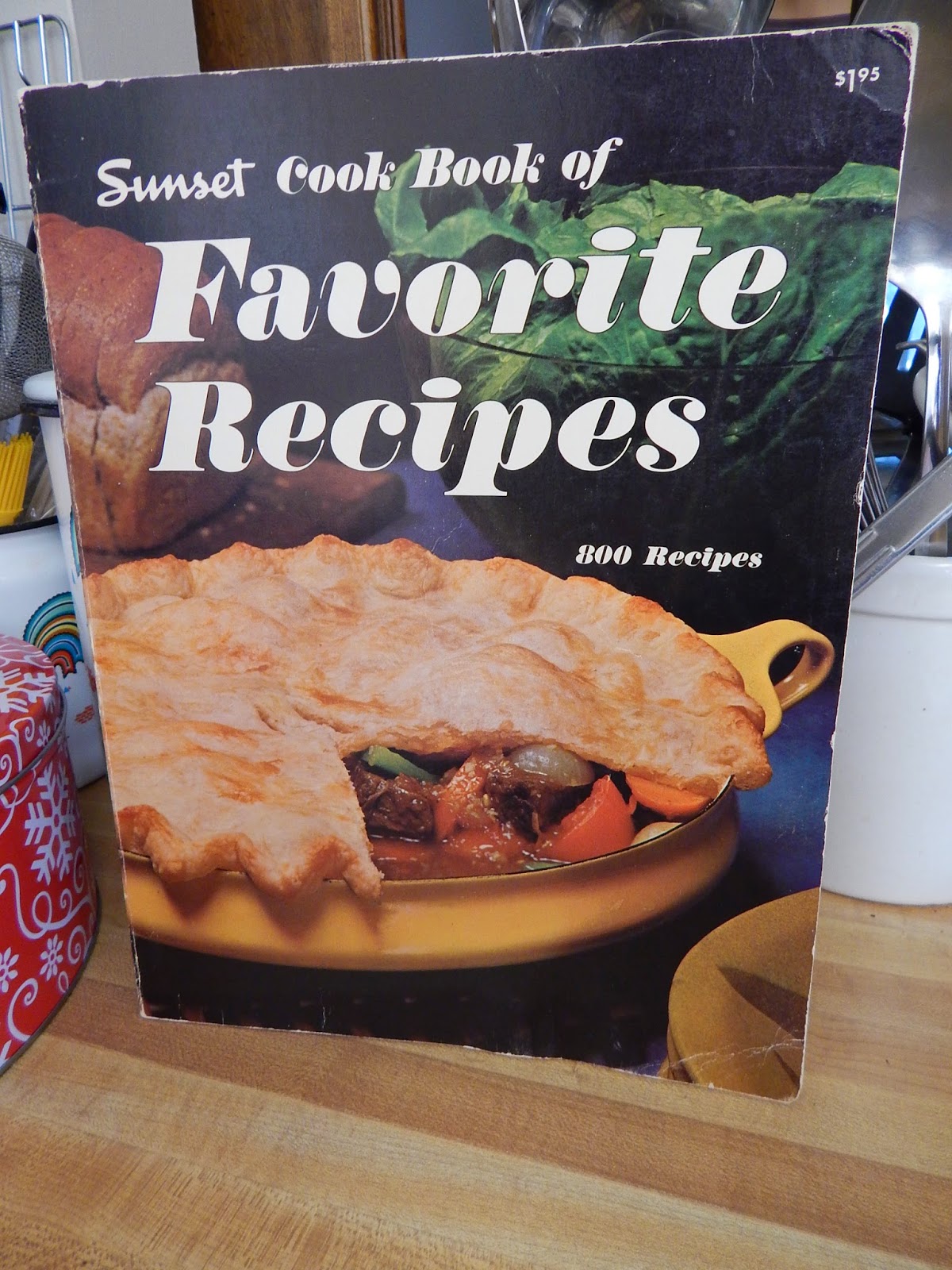 Mmmmm, pie. I made an excellent mushroom, spinach and onion pie last night. Served with a light salad it was perfect cold weather fare-had it been cold (January in Nebraska, it just shouldn't be this warm). I've had such great luck with the recipes in this cookbook. Simple ingredients, easy to follow directions, and perfect results. I sure do miss the days of reliable cookbooks. Today, they're all glossy photos and untested recipes that were rushed off to the printers for the Christmas sales deadline. Maybe not *all* of them, but a good many from my experience. The cookbooks from Sunset magazine are reliable, and I've used my bread baking and canning cookbooks to the point where they are falling apart. Anyway, with a fever and a running nose (and cough, oh god, the cough will not stop) I didn't feel like doing anything that would require much concentration. What I got was a beautiful coffee cake that can sit on the counter all weekend long for people to help themselves...which they will be doing because I will be in bed praying to die resting.

I haven't had a serious flu in several years-decades actually. My 21st birthday I was confined to bed with a high fever and all the fun that goes with it. That was easily the worst viral illness I've encountered and while I am miserable now, it isn't even close to the suffering that one brought. My parents were cross with me for getting sick as they'd made a reservation at some exclusive restaurant, and I was too sick to go. They took my sister instead, but not before tossing a plastic bag at me in bed containing my present. When I finally was well enough to look a couple days later, I discovered a cheap nylon robe in what was obviously the wrong size (I was never in my life a small). Anyway, I'm not likely to ruin anyone's weekend by taking to bed, but if I do at least there's food in the fridge and cake on the counter.

You Will Need:
A strong glug of peppermint schnapps (that was for me, but you should have one too-medicinal qualities, blah, blah, blah)

Grease and flour a tube or Bundt pan. Beat together the butter, sugar and egg until light and fluffy. Stir in the sour cream. Sift together the flour, bicarb, baking powder. Add to the creamed mixture mixing well without over-mixing. Stir in vanilla. Toss together the chocolate, sugar, and cinnamon.

Pour half the batter (it will be thick) into the pan, spreading to even it out. Scatter half the chocolate mixture on top. Place remaining creamed mixture on top, and then finish with a layer of the chocolate. Place pan in a COLD oven, and set to 350 degrees F. Bake about 55 minutes (keep checking as ovens vary, or until it tests done with a toothpick. Cool in the pan on a rack.

The cookbook suggests serving it in slices directly from the pan, but I had no difficulty unmoulding it. I would caution you to let it get mostly cool (at least 30 minutes) before turning it out, and to generously butter and flour the pan. If you have any doubt about your pan or abilities though, do as the book suggests and cut it in the pan.

I dusted mine with icing sugar, but a light glaze would also be nice. Sour cream cakes (this is pretty much a pound cake) keep well in a cool place. If you're in a warm climate, keep it in the fridge and bring it to room temperature before serving.

Happy weekend. I'll be in bed with the hottie (that's the hot water bottle, get your minds out of the gutter) if anyone needs me. I won an eBay auction of five pristine bottles of Lentheric perfumes in their original gift packaging and cellophane for the absurd cost of $11.00 They arrived today, but alas, I won't be able to smell them any time soon. I know I like Tweed, but Shanghai, Confetti, Dark Brilliance, and Miracle are new to me.  There's my incentive to hurry up and get over this snot-fountain of a flu. 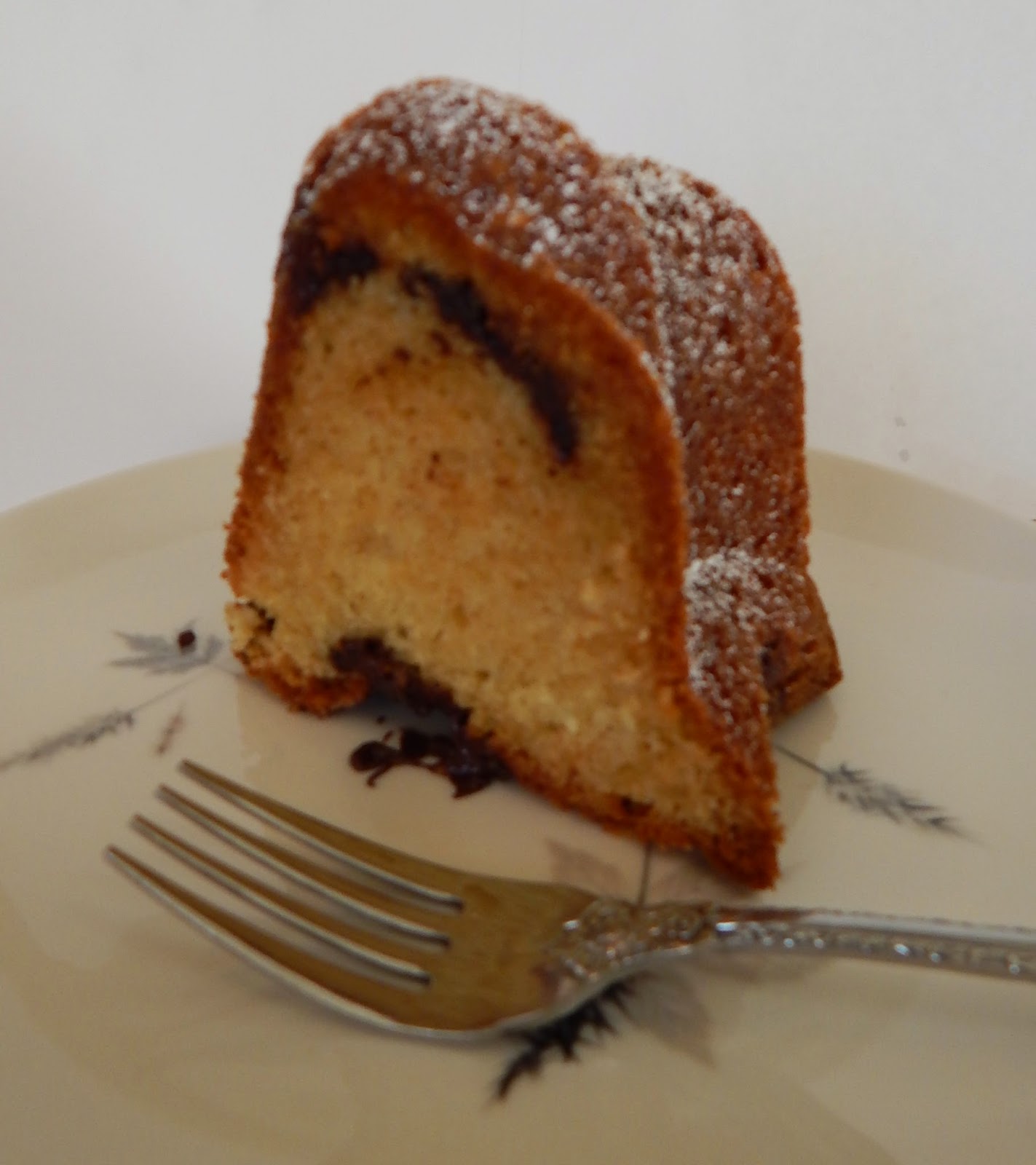 Did someone say, "Cake? I'll be right over!" 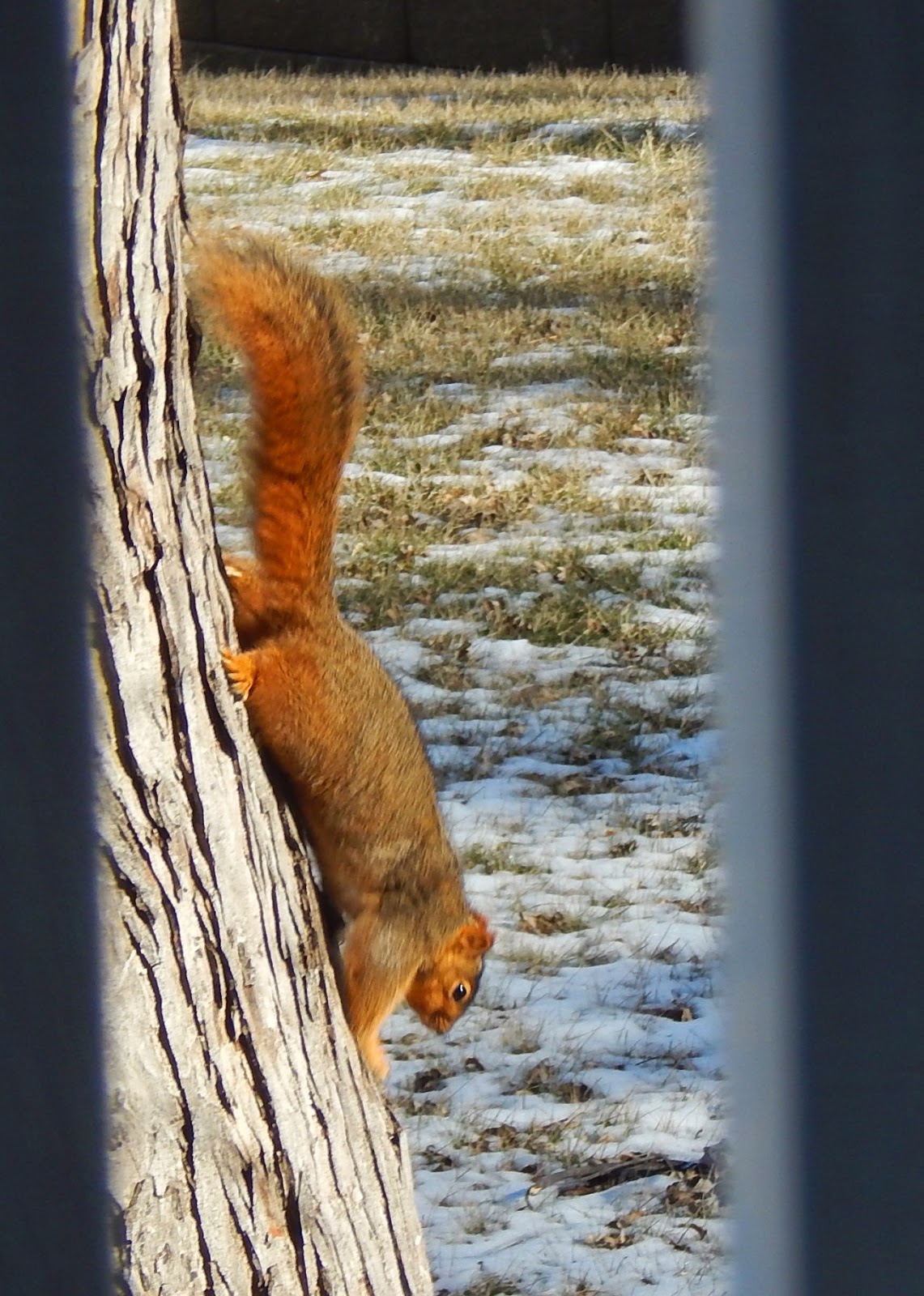 Never mind the $66 test to determine if it's A or B. It's already too late for the Tamiflu and besides, as my medico phrased it, "If it looks like a duck, and quacks like a duck -- who cares what denomination it belongs to?"

Just settle down in bed with old-fashioned aspirin and gallons of your favorite lemon-lime soda and make up your mind to lie low for about a week. Ice packs may help the headache from Hades, and then again maybe not.

I'm so sorry you've caught it, Goody. I'd had the Swine Flu, the Asian Flu and the Hong Kong Flu, even H3N2 -- but this was the most debilitating. Please take it seriously: if you can't breathe, get thee to an ER, stat!

@Curtise
We really weren't permitted to get sick as children. It was like some sort of personal failing. I'm a terrible patient anyway-I can't seem to just rest when there's things to be done. I may struggle to get them done so badly it would have been better left undone, but that's me. Someday, when I'm old Danny is going to have his hands full looking after me!

@Beth Waltz
I'm sorry you had to go through this too. So far it is bearable-but just so. I'd have to be pretty darn sick to see a doctor (haven't in years and years) but I do live across the street from a hospital, and have a student nurse living next door. She's a nice kid, she probably wouldn't let me croak. I've rediscovered those packets of freeze dried Cup-Of-Soup. That helps considerably.

That cake looks fabulous, never attempted a bundt cake though I have bought a tin from a thrift store - just waiting to be used. I hope you are much better now. Good to see Blondin is still mobile and able to climb trees.

Oh no, in bed with a hottie!! My mind didn't even venture near the gutter I knew what you were on about. I cannot believe that you still cooked while unwell. I would have scarpered to bed and left the family to fend for themselves while I was praying for a quick exist from sickness!! Do hope you feel better soon, Winter is a bastard for making you sick. I LOVE your knew photo at the title. I salute you dear friend, now back to bed and kick the arse outta that flu. xxxx

@Jayne
I think Blondin is losing his figure though. Hopefully it is just the bulk of his winter coat.

@Mim
I guess it is supposed to be something you serve *with* coffee. It is something the US embraced from our German immigrants, the whole tradition of having people over for cake and coffee. Coffeecake can also be a yeast risen cake, typically with jam and icing. They're rich, but simple in presentation. You'd never see a Victoria Sponge qualify as coffeecake, but cinnamon buns would.

Madness, I know. Thankfully I don't edit cookery books for a living-I wouldn't know what category to put half the stuff in.

Thanks. I try to match my header photos to my current mood ;)