"Put on a Jumpsuit, We're Going to Play Pinball!" 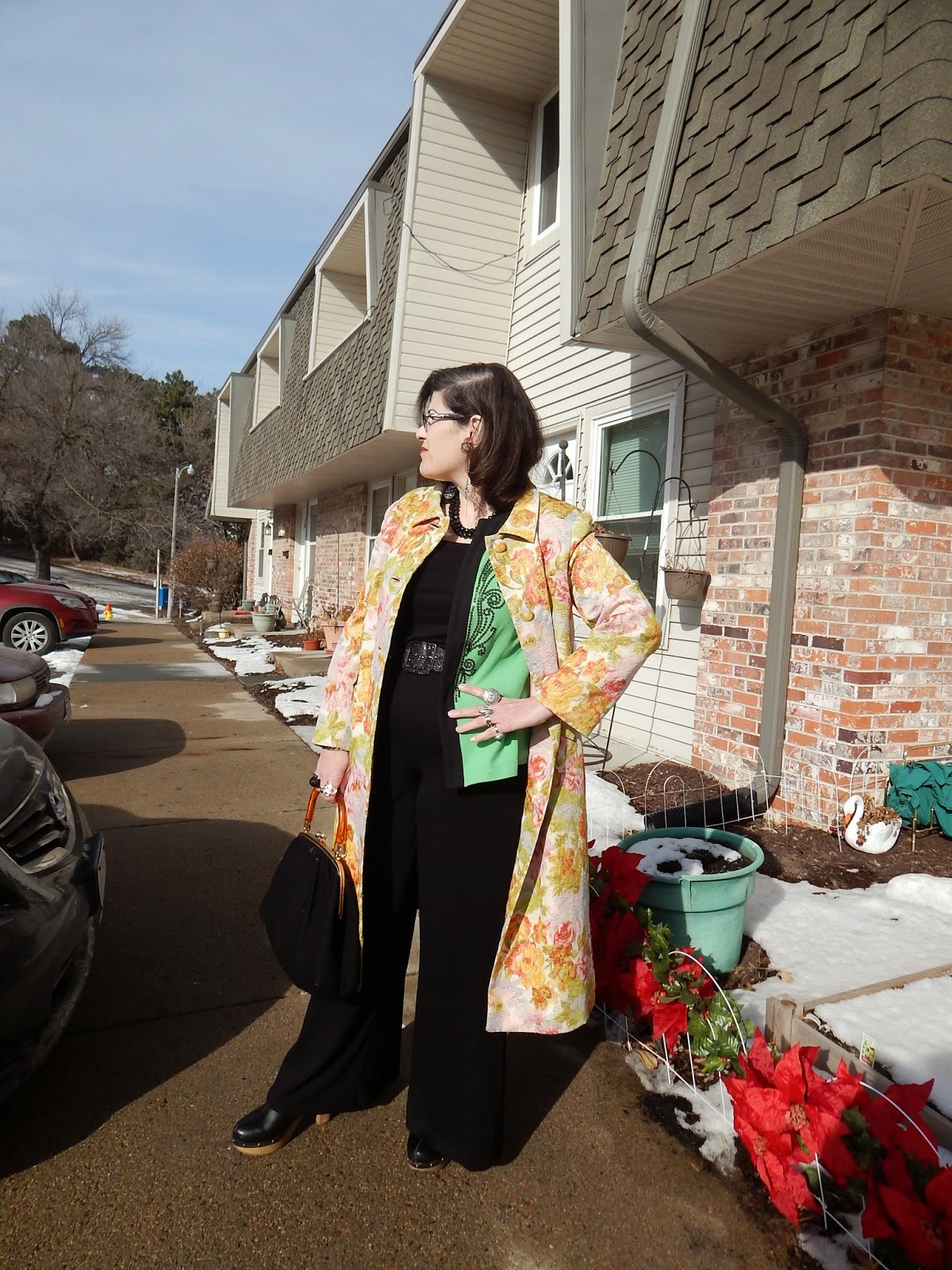 This is becoming a Sunday routine, heading over to Bronco's Burgers to play the pinball machines. It wasn't deliberate, but once again, I am wearing a jumpsuit. I wonder if the teenagers behind the counter are muttering, "Hey, here comes jumpsuit lady to play pinball." Probably not, teenagers don't notice anything unless it happens on a screen. 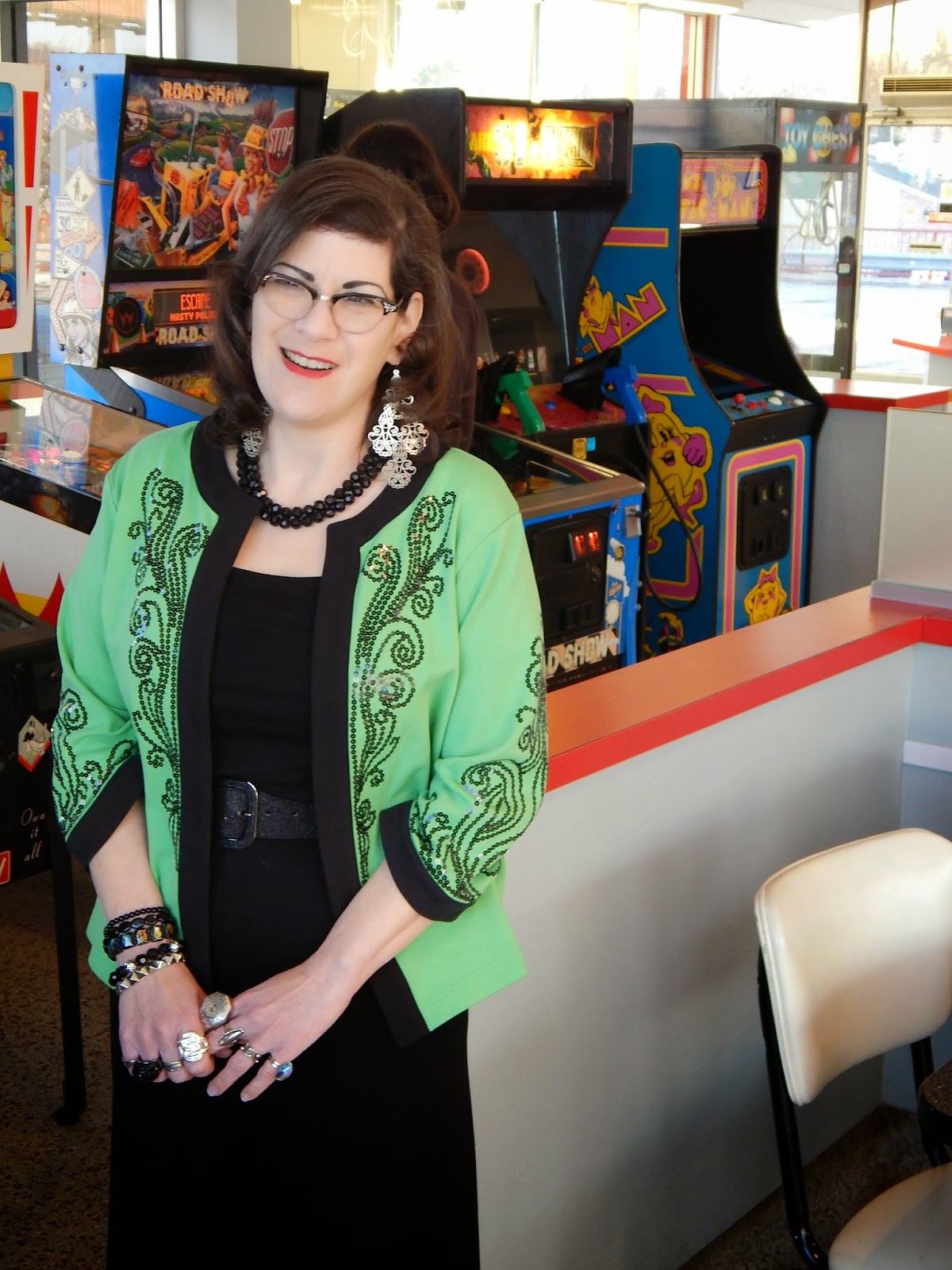 This is one of my favourite jackets, though it is terribly out of my comfort zone. The colour is so striking, and the sequins are nicely arranged-my only disappointment is that it is sewn on a rather tacky jersey material. If this had been silk or even a good synthetic it would have been a treasure. Instead, it is something I can wear casually for trips to the Broncos for pinball. 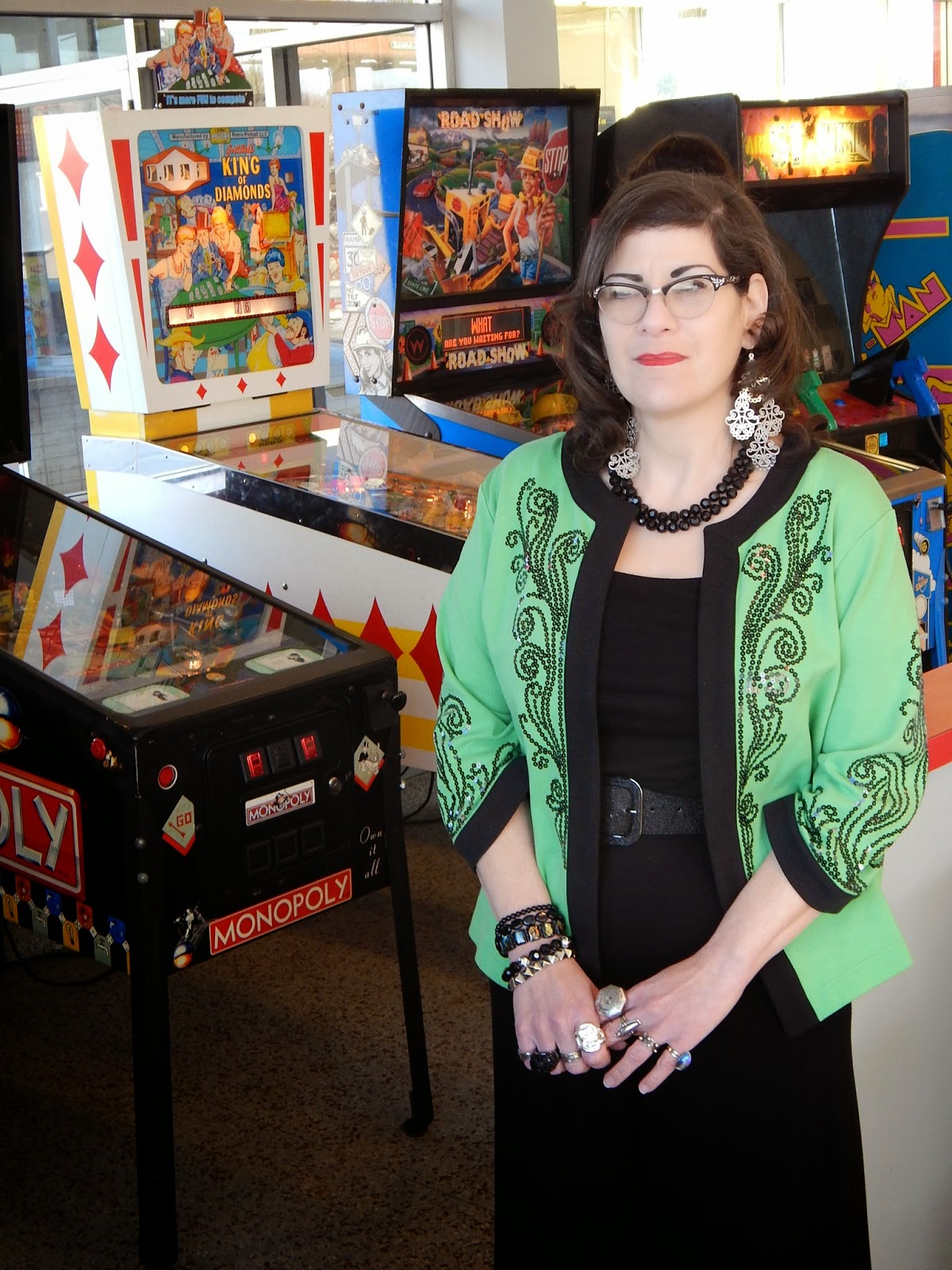 I used to be rather good at pinball, but these days I'm more of a spectator. Danny is quite good at it, which is nice as it now costs .50 cents a game. 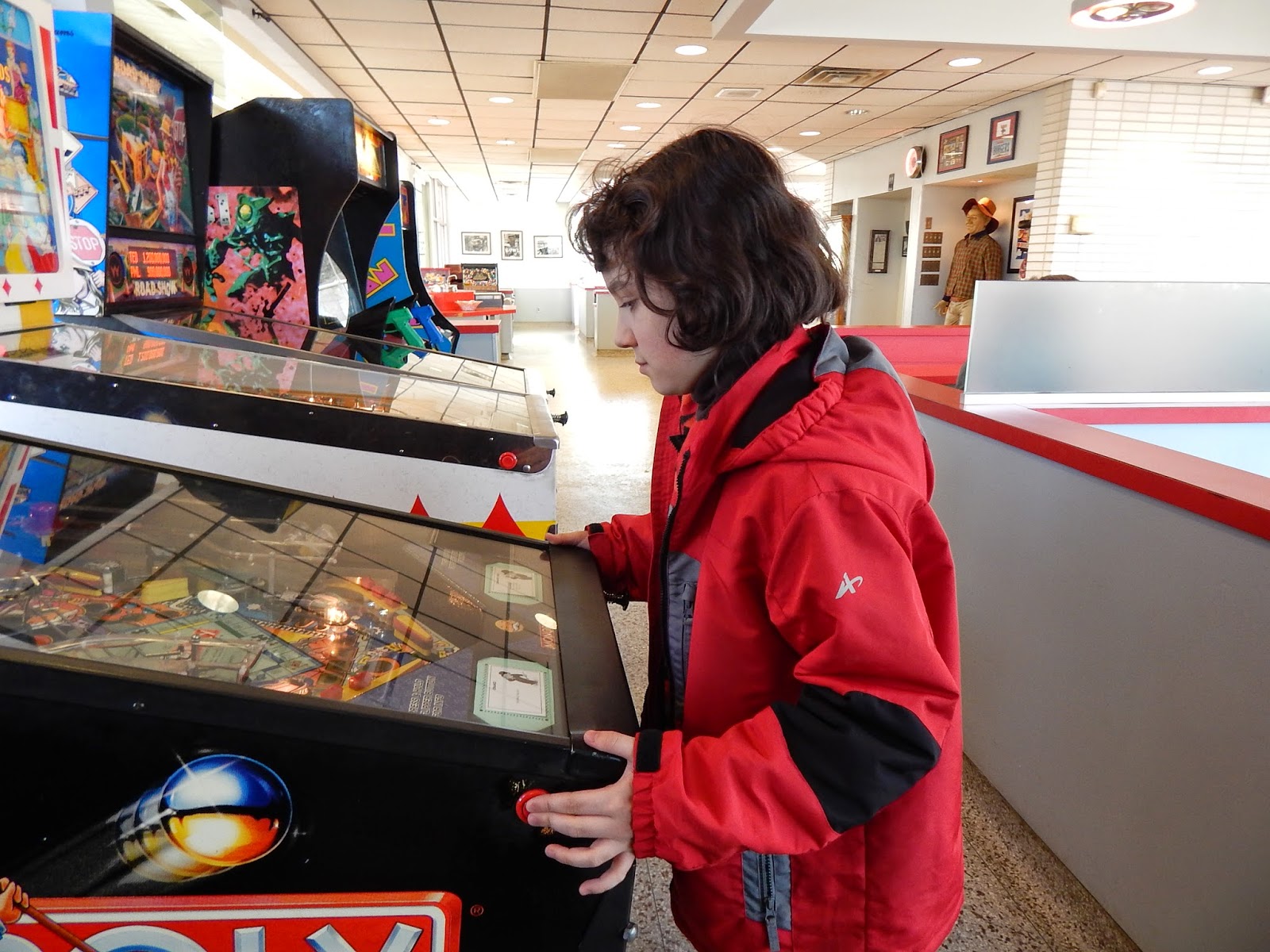 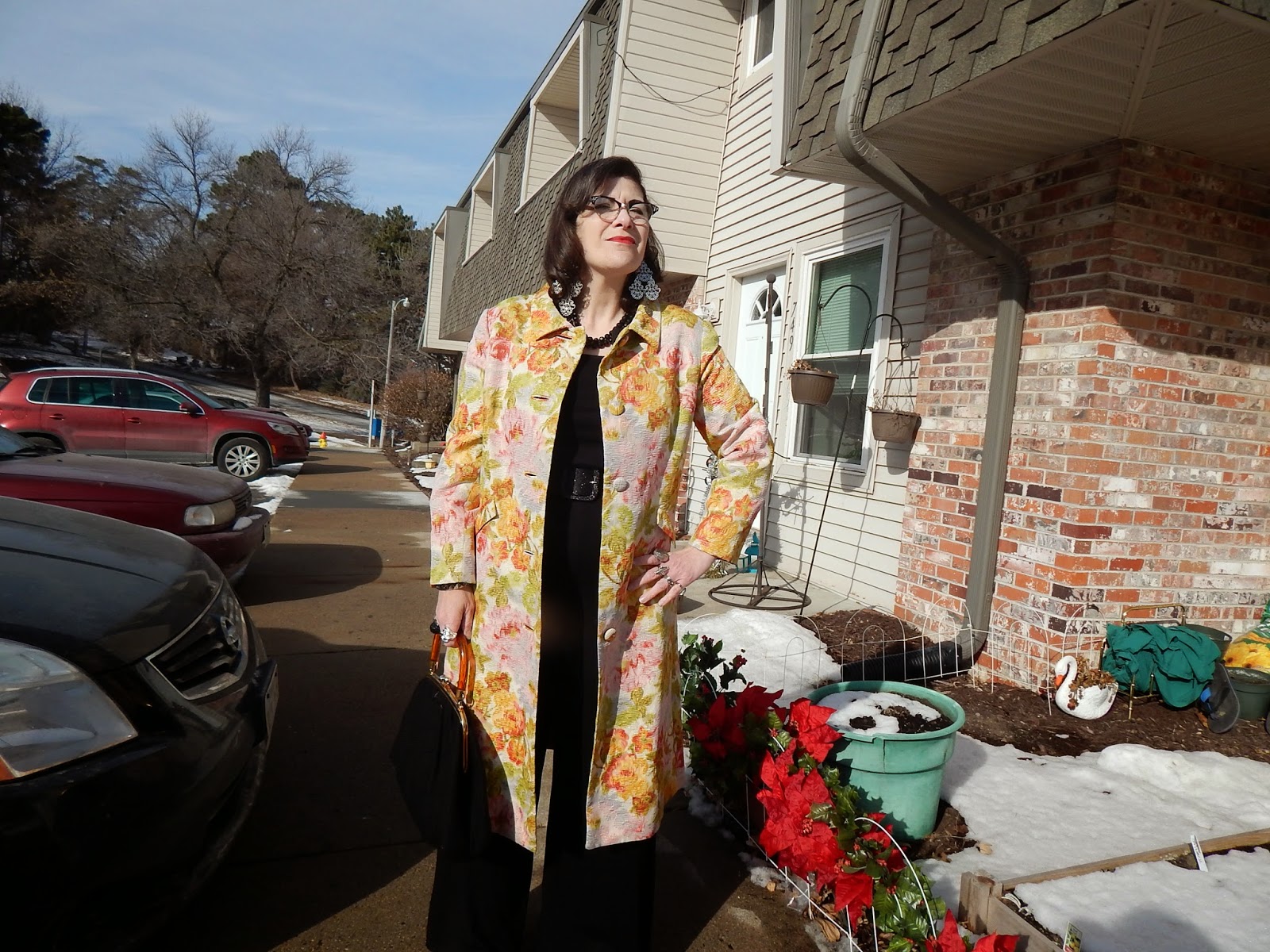 Someday, I will wear the dress and coat together as the Hong Kong dressmaker intended. It is a lovely set, I'm sure the woman it was made for looked elegant in it. I'll go out on a limb, and guess she didn't wear it to play pinball.


That was Sunday, come Monday it was back to homeschooling chic, that is-skirt, blouse and cardigan. 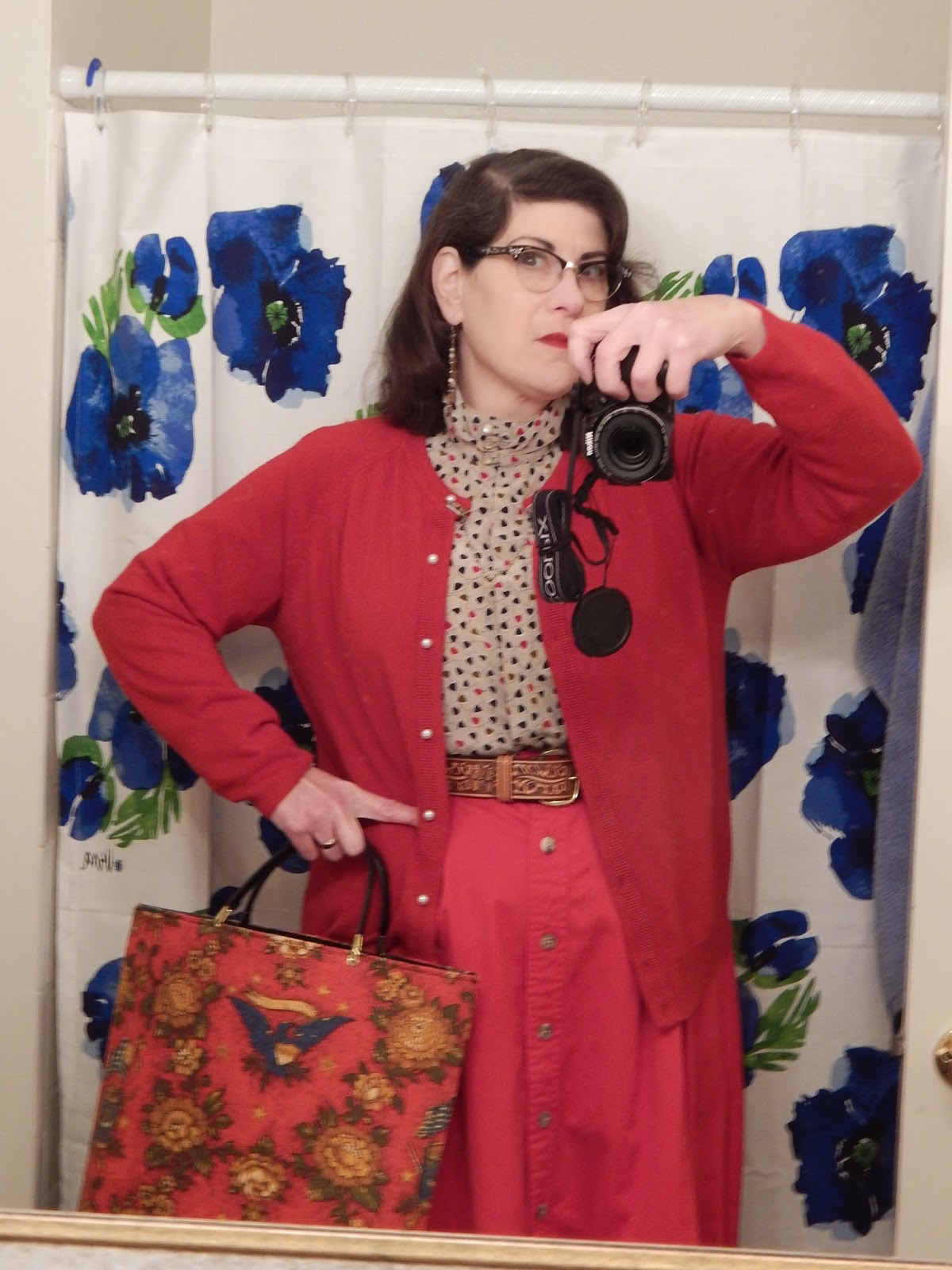 I like to be dressed, without being dressed-up. My only chore was a quick trip to the post, but as I have two wardrobes filled with clothes, it seems silly to skip an opportunity to wear them. 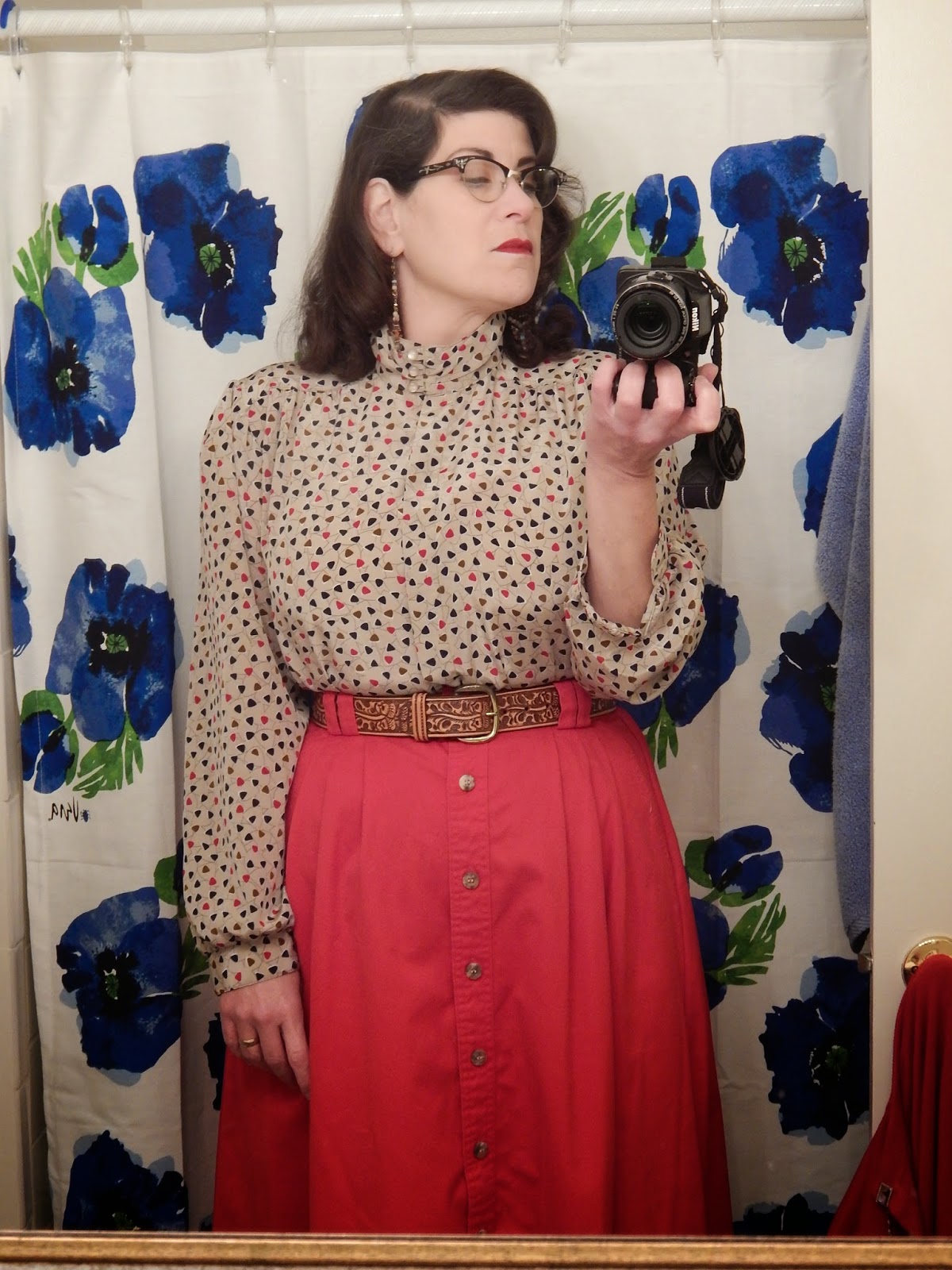 By the time we got home, Danny was burning up with fever and had a cough. I swear, he was fine one moment, and then...not.  He's had fluids, and rest but I guess what he really needs is time to recuperate. I'm lucky he isn't difficult when he's poorly-some children can really run their parents ragged. I think I was a terrible pain in the behind when I was his age. Probably caught something from the pinball game. 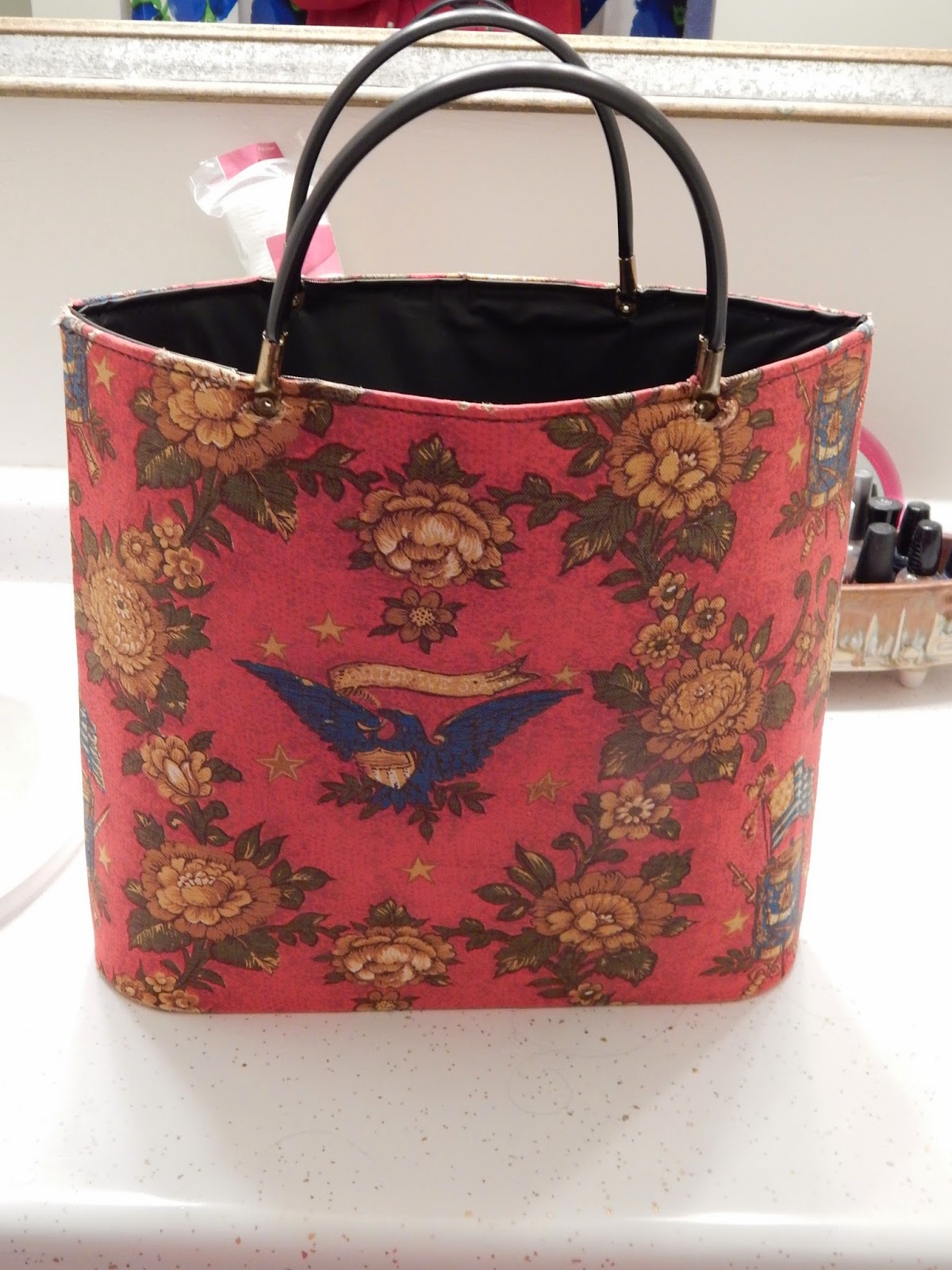 "Some tacky Americana for you Ma'am?"
Why yes, please!
I don't know why I like this sort of thing as much as I do, but there you have it. I'm still not likely to deck myself out in a star-spangled nationalistic display, but I do like Bald Eagles, and colonial period symbols. If I could find a purse emblazoned with the Liberty Bell, I'd probably buy it.

This bag, and the tapestry one just like it hardly get used outside the house as they hold my rolled-up tights. As great as they are for storage, sometimes an outfit demands their use, and then I have to scramble finding a place for my tights. I hate that. Anyone have a genius storage idea for tights? I'd love to hear it. 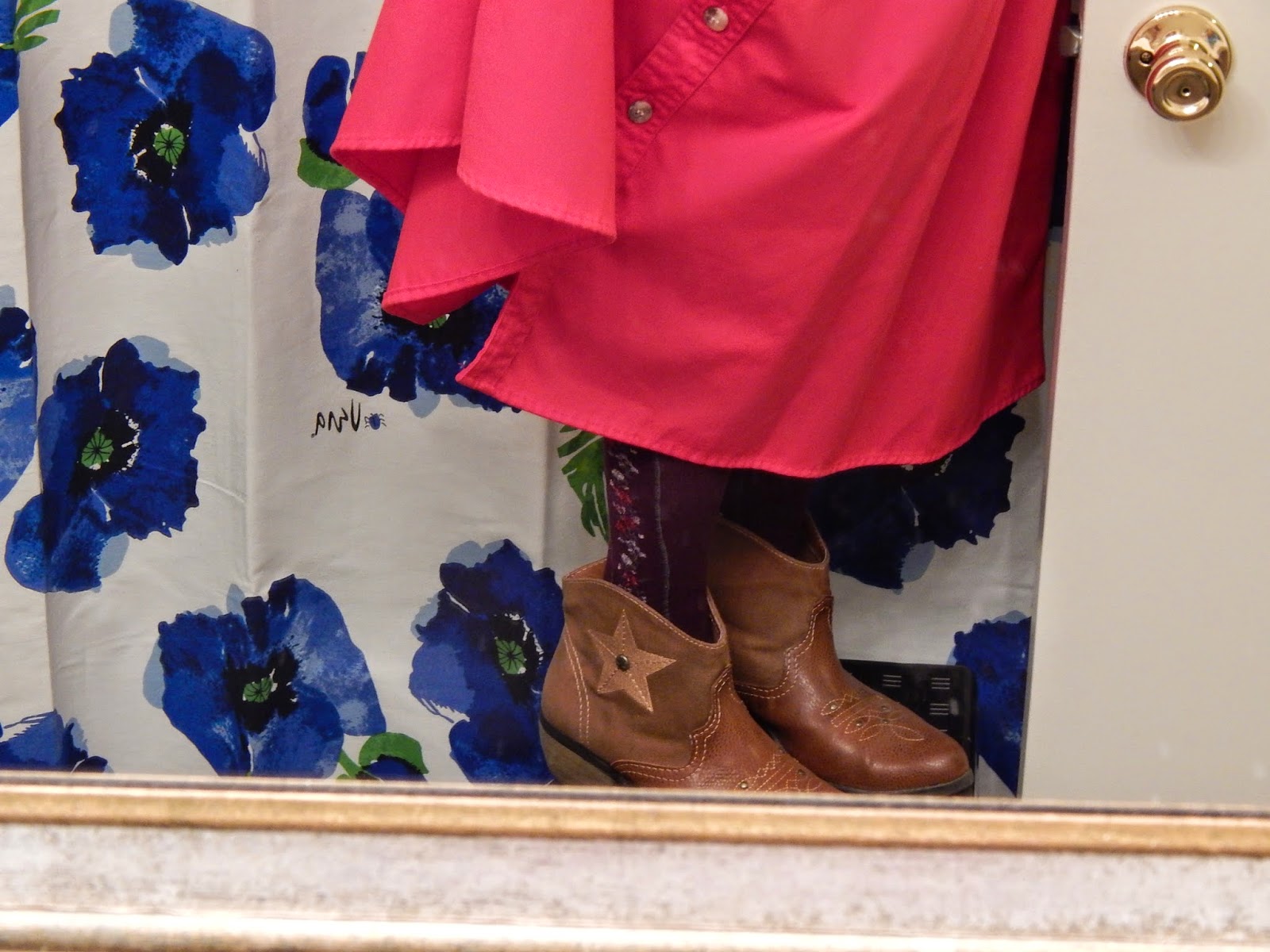 And then of course, the boots. My favourite knee socks made an appearance as well.

Outfit Particulars:
1980's silk blouse-Goodwill
Vintage Designer Originals (when they were still made in NH) cardigan-had it for ages
Red skirt-Thrift World
190's tooled leather belt-Goodwill reserve (everything .99 cents)
Nine West knee socks-bought in the 90's
Boots-K Mart
1970's Americana bucket bag-Hand-Me-Ups
Fragrance-Jean Nate splash and body lotion (I feel so...invigourated! and I smell just like lemon curd on a scone. I don't remember it smelling this sweet, and I wouldn't buy it again, but damn it makes me want to go to the track...)

Are the classic fragrances still manufactured by the original people? Or fabrique en Chine? I, too, believe they've changed, but it's truee that scents do recall memories! Frenchman wrote a book about it, as I recall...

Storing tights? A friend of mine pulls her knee-highs through toilet paper rolls; her long lengths, through paper towel rolls. Then she stacks them in a drawer like sloppy logs. At least it's an improvement over what she calls a "slew of snakes".

Jean Nate is owned by Revlon now, and so many other brands have changed hands.

I so want to see the frock that does with the coat now. Can you organise that for me?? Thanks love! I want to go play pin ball now, don't have a jumpsuit but I am sure I can come up with an outfit or two. Back to being school mam. Hope Danny recovers soon.

I may need to show it on a hanger as I'm not sure it will still zip-up on me! I'll try to get to that though.

@Mim
Since homeschooling mothers have the image of being either in our pajamas all day long, or wearing turtlenecks and pinafores, I try to be a good fashion ambassador. Since I do consider it my job, I like to get dressed.

Danny is feeling better, but being the considerate boy he is, the cold has now been shared with me.

When I lose my voice I sound like Scooby-Do. I don't think we'll be reading Chaucer aloud today.