Thanks to everyone for your kind words on my no-resolutions post. I'd have you all over for one hell of a wild pool party. 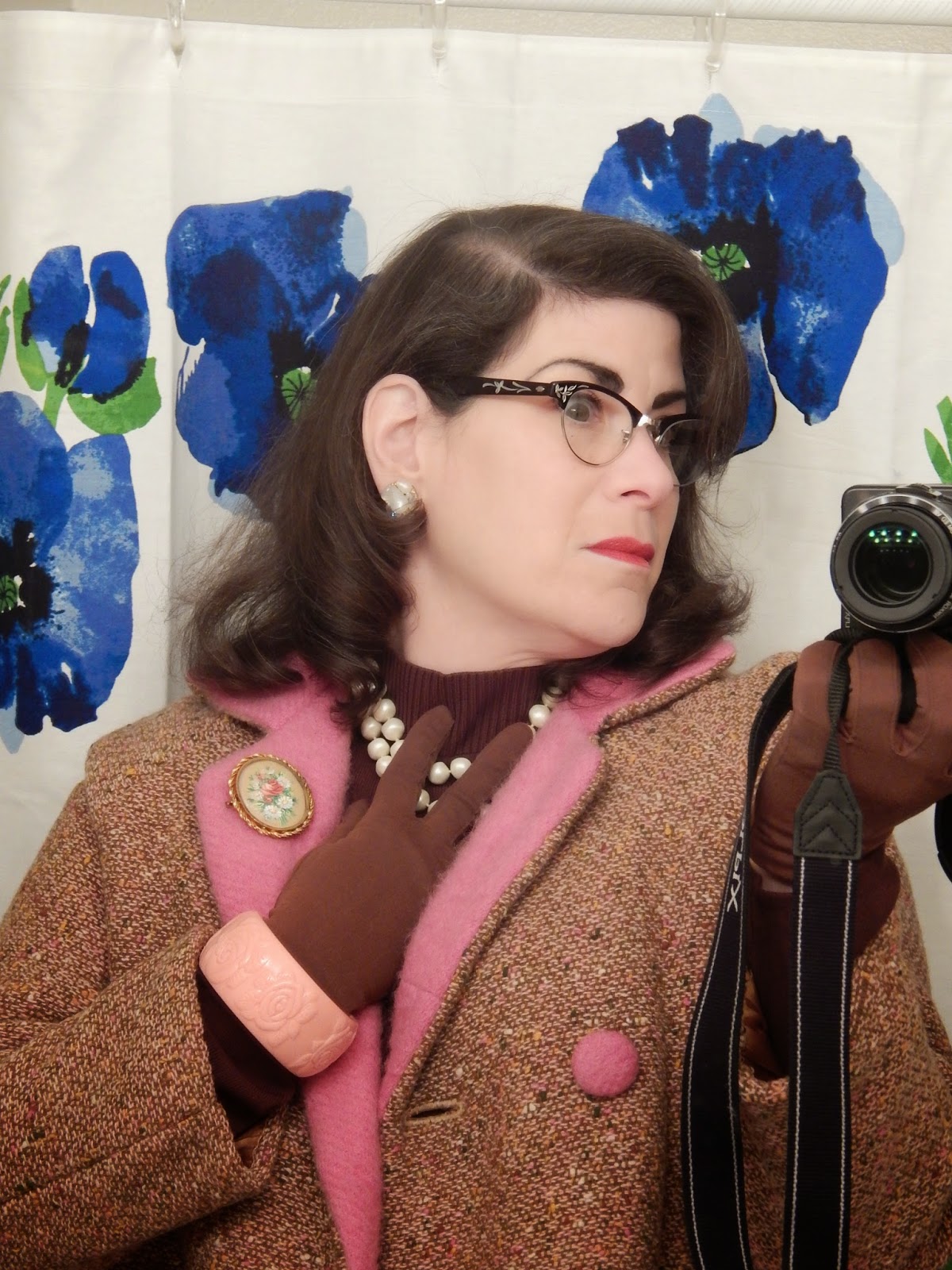 *Gasp* January? Already?! Why just last evening it was December. I watched some fireworks, ate some ice cream, and the next thing I know the calender says, "January." Well I'm terribly behind-better get cracking! 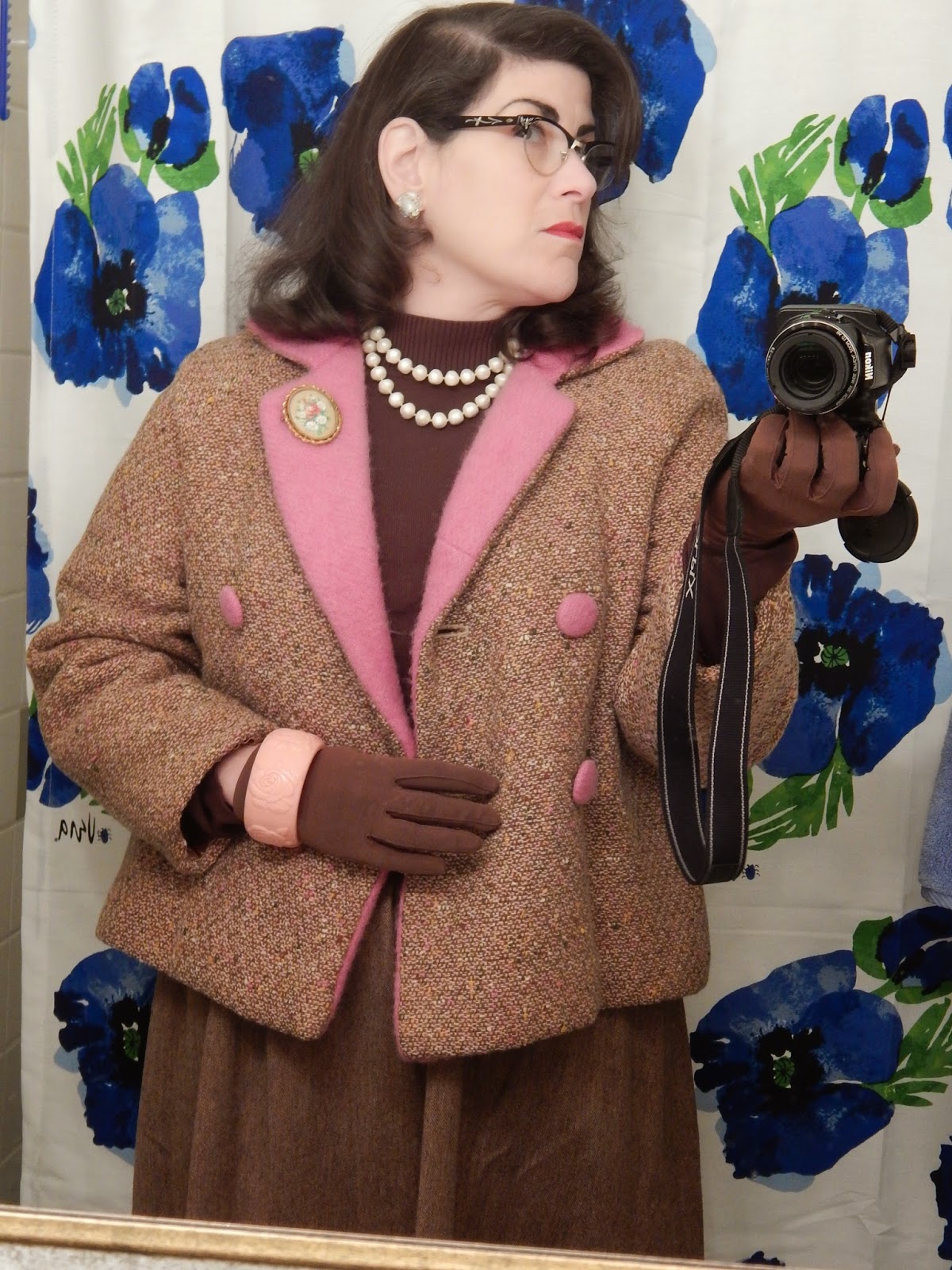 I can't believe this coat I bought last summer was still unworn. "No time like the present", as I would always say if I were a bit more organised than I am, so I tore through my wardrobe looking for a reasonably tweedy skirt to match, and came up with this. There. First day of the year and I accomplished something. That should hold me until at least April. I also cut my hair a bit, and finally got round to removing the last bits of Summer's toenail varnish from my left big toe. I'd been hoping it would just wear away like the rest thus saving me the effort of bending over and wiping it off with Cutex, but this being a whole new year and all, I figured it would be best to finally get it off of there. Whew, now I'm really exhausted. 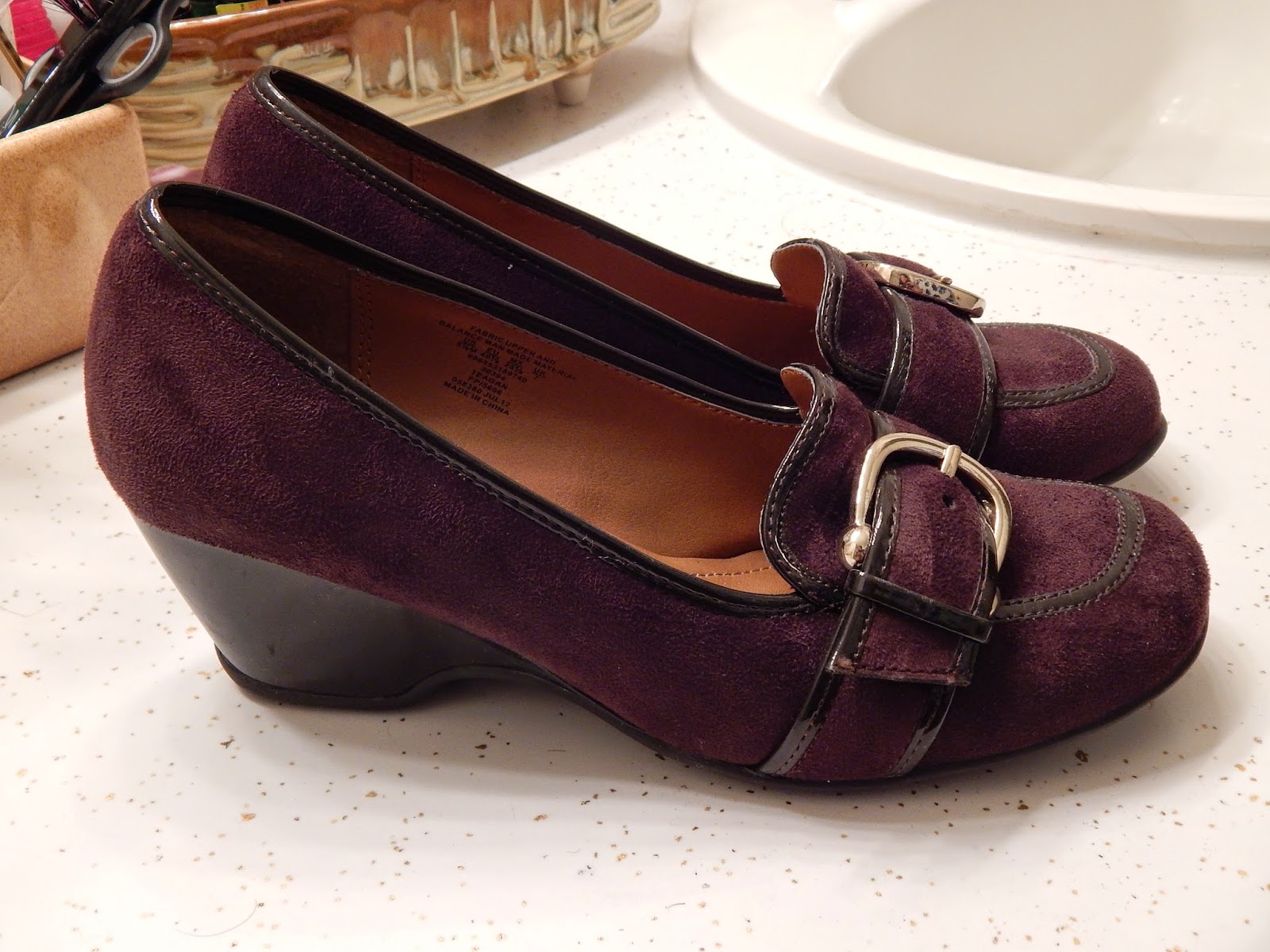 These shoes don't get nearly enough wear either. I liked them so much I bought two pair in brown and black, but I still forget to wear them. They look vintage, but they're K-Mart from a few years ago. I was sure a patent-leather covered heel would never survive our weather and the floor of the Mighty Ford Tempo, but they have. 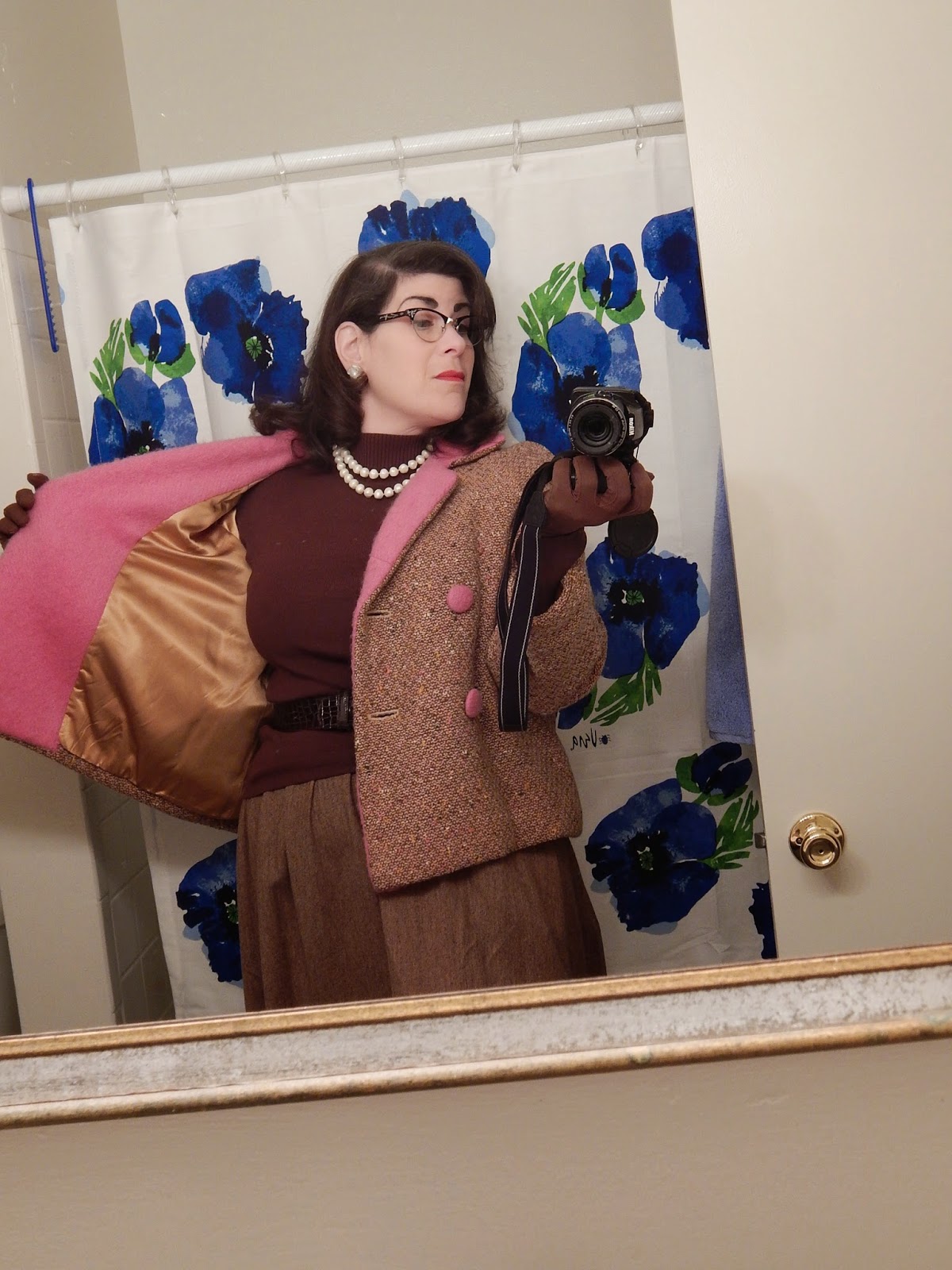 "Pssst. Yeah you over there. Wanna see a really nicely sewn lining? Have a peek." 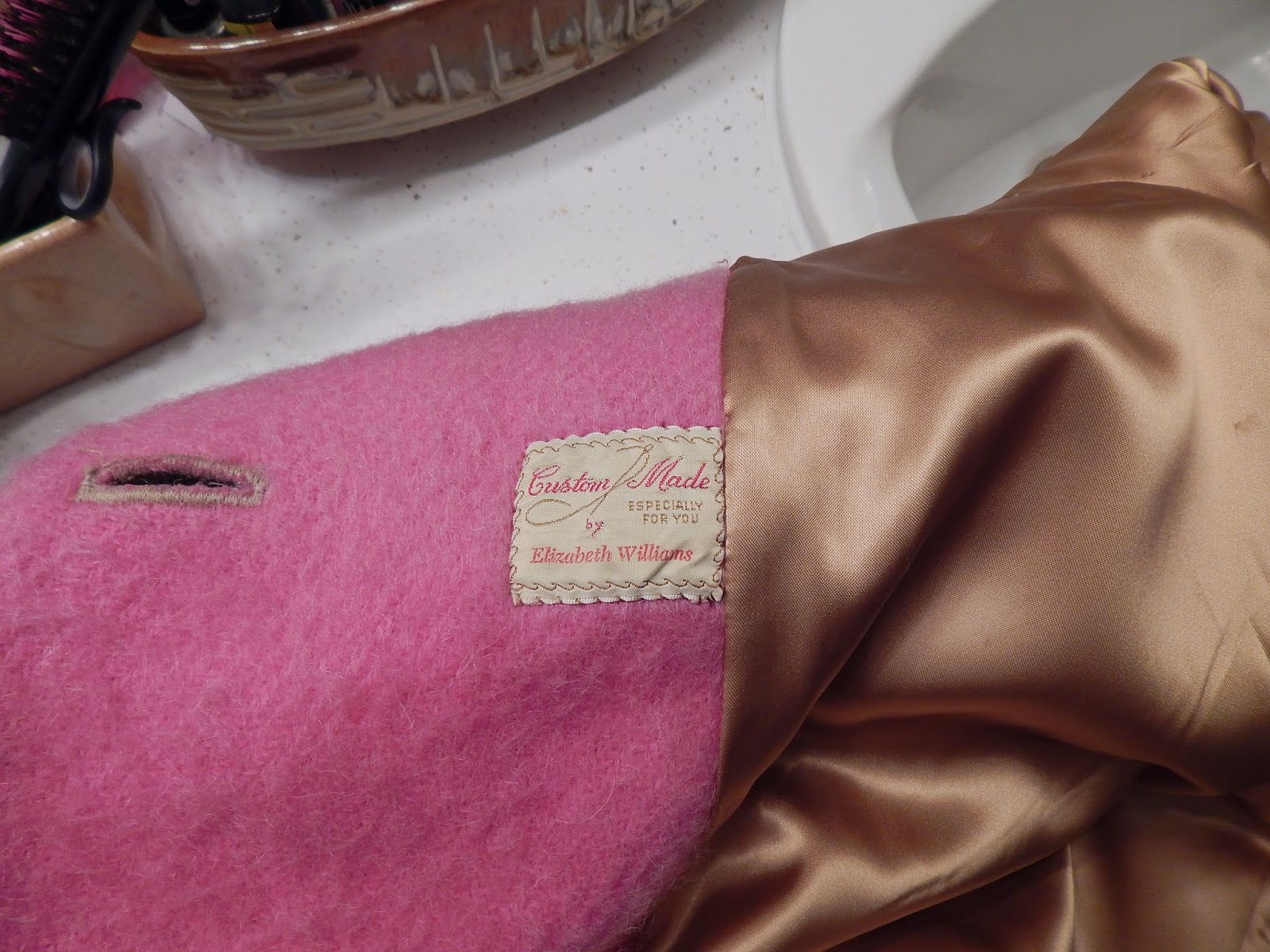 This is such a lovely custom sewn jacket. I can't imagine anyone would willingly part with it-I'll bet they packed Nan off to the care home, and donated her carefully tended clothing to the thrift store. I wish I could tell her (and the seamstress) just how much I'm enjoying it. Don't worry Nan, I'll care for it with the same attention you did.

The jacket is double-breasted, and it does close but then I can't stand being buttoned-up lately. I blame the menopause. *Shrug* The mohair isn't helping either, and came off halfway through the produce section of the supermarket. Poor Danny, last week I kept asking him to run upstairs and fetch me the thermometer as I was certain I'd taken ill-only to find it was perfectly normal. Sigh, I'd made it so far with nary a symptom and now near the end I'm confronted with this. I need one of those mini-fans people wear around their necks on trips to the tropics. I'm probably a bit too pinko for a gigantic canister of aerosol Evian water. It IS hot in here, isn't it?

Next up is Mr. ETB's Birthday (He gets a Black Forest Totre because that's his favourite) and then on to Burns Night. I made an absurd looking bagpiper from foamboard to hang on the front door. There will be a veggie haggis, and poetry. And probably Scotch. Then, the second semester begins anew, and we get to the 14th Century. War, peasant revolts, the Black Death-what more could you ask for?

I might be needing a few more wee drams of that Scotch.

Menopause is a real bitch!! I have been have some of those hot flushes and it is summer for gods sake here so it is burn up stuff for me. Nice jacket love, cute shoes and as always a fine post!! January?? How did that happen??

Happy New Year, Goody! You can't beat a bit of tweed. And hurrah for old ladies who look after their clothes so we can go and find them and care for them anew.

14th century, eh? I know shamefully little about that period, apart from the fact that we got a shedload of castles and cathedrals out of it...

What a lovely jacket; there is something ridiculously pleasing about a delightfully well-made lining, isn't there? Oh but I struggle with mohair anywhere near me, especially my neck - I keep trying, but I just can't tolerate it... The 1950s mohair scarf I wore in a post a couple of weeks back ended up as a Christmas present for a friend.
Ugh, tell me about the temperature weirdness of the menopause. It's changes from one to another which my body can't seem to handle - going from the cold outdoors to a heated inside environment leaves me red-faced and sweating like the pig that knows it's dinner. (A line borrowed from Frazier!)
Bring on the Black Forest, Burns, and revolting peasants with the Black Death - so much to look forward to! xxxx

@Sue
Ice cream, that is all!

@ Mim
I'm hoping all the gore will hold the attention of a 10 year old boy.

@Curtise
This was itchy mohair, and I had a nice red patch along my jawline when I took off the coat. You're right, some things ain't worth the suffering...probably.