I Could Never Be a Spider 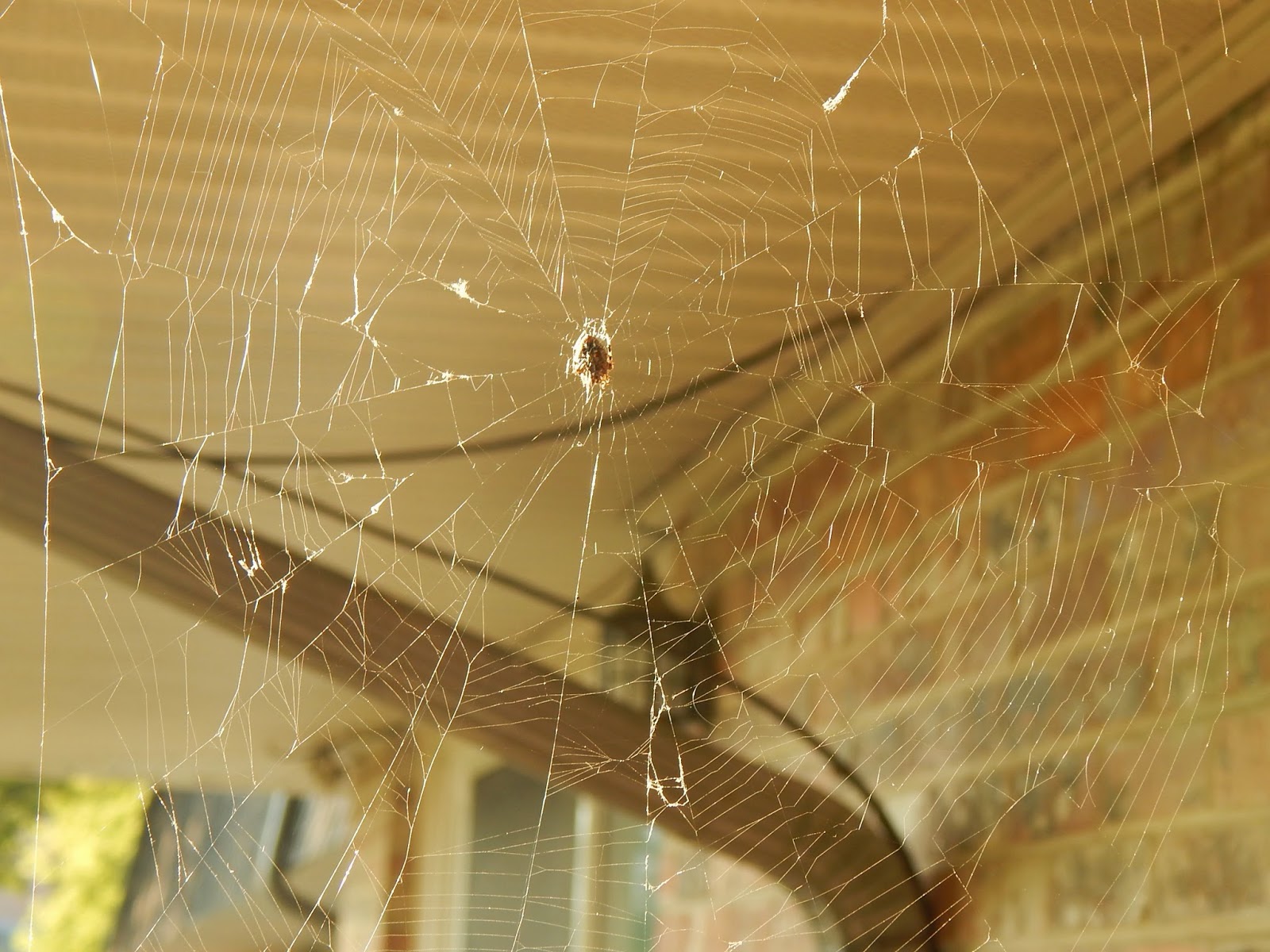 They work so hard, day after day on their beautiful, elaborate webs-all for a couple of flies. I suppose that's all a spider needs, but I couldn't do it. No, I'm the sort that would wait until the last minute, build a half-assed web that fell apart at the first wind, and then complain of hunger. The spiders have been busy (perhaps they know the fly season is ending?) on the balcony and in the garden. I try to avoid disturbing them, but I nearly walked into this one. If the sun hadn't been hitting it just-so, all her hard work would have been gone. 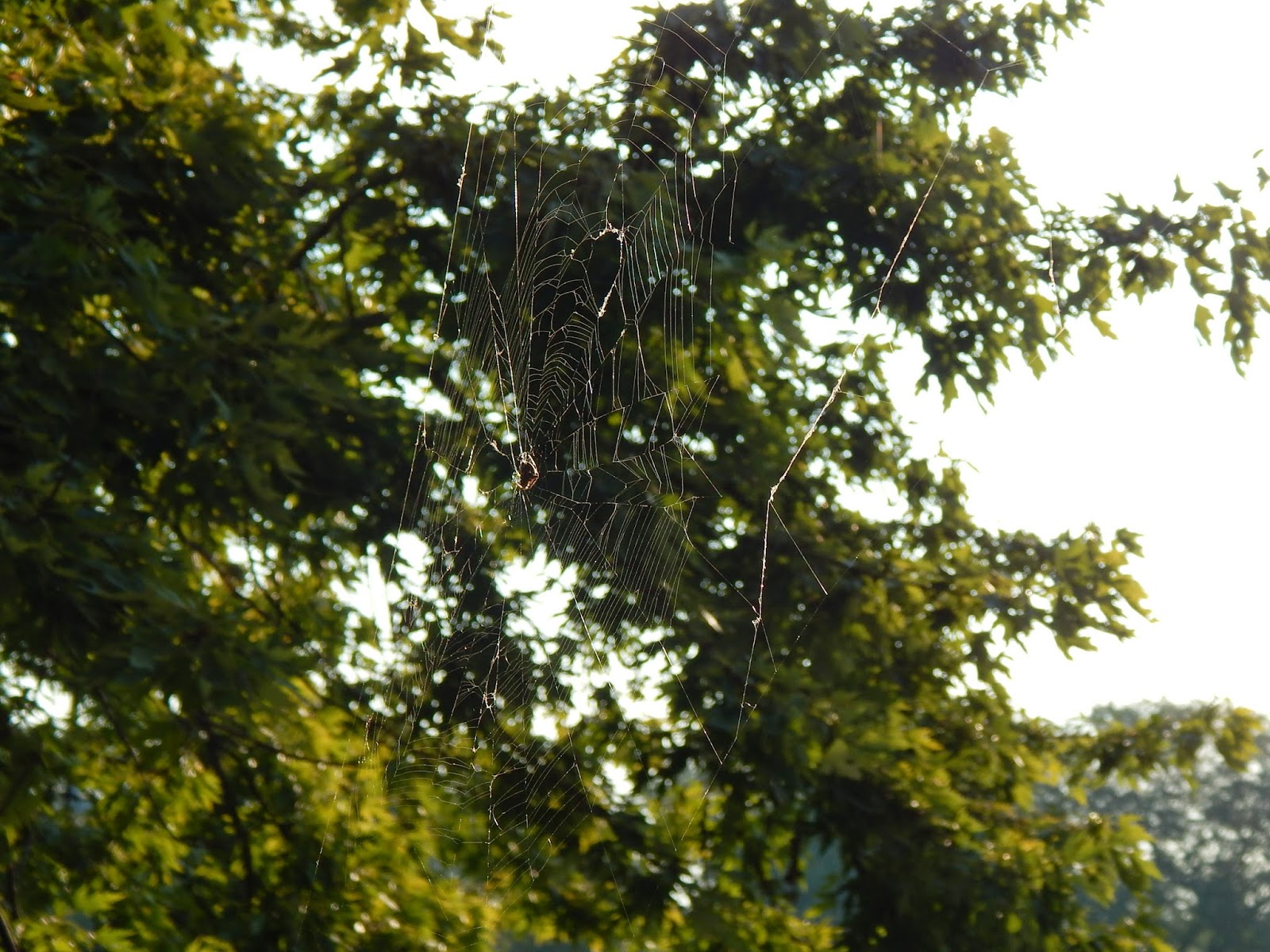 There's plenty of work to be done, for spiders and humans alike now as the days grow shorter. I expected to be less aware of the seasonal shift in the city than on the farm, but if anything my sense of it is all the more acute. I took a walk a few evenings ago, just as the light was leaving the sky and saw several nighthawks swooping around the lampposts near Dodge Street. You can tell a nighthawk by their wing shape and the white striped pattern on the underside. At first glance, they're unremarkable until directly overhead, and you see their markings. As the night grew darker, I could see what looked like a strangely lit cloud bending and moving across the sky. Then, I saw another. And another. In a moment of excitement I wondered if I might be observing an Aurora, but realised quickly that it was just a migration of snow geese headed for the wetlands to rest overnight. They were high enough, and the city's ambient noise loud enough that I couldn't hear the familiar sound of a large flock of geese, but once I understood what I was seeing, I was transfixed. There's so much to see and experience, but you have to look up once in a while to catch it. 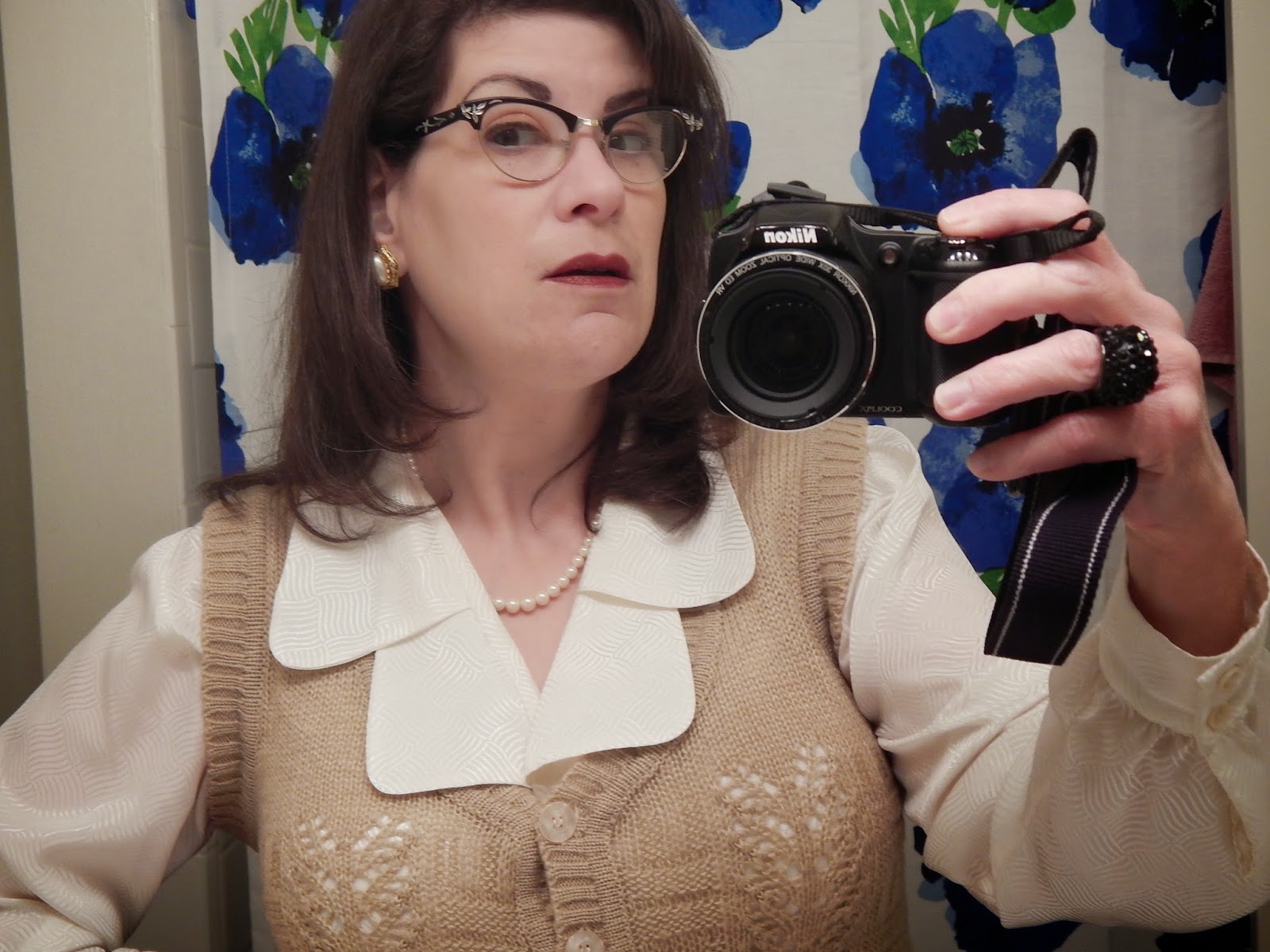 I haven't had a chance to look around much of late. That's not a complaint, I enjoy being busy to the alternative, but I really ought to make a better effort to catch my breath. 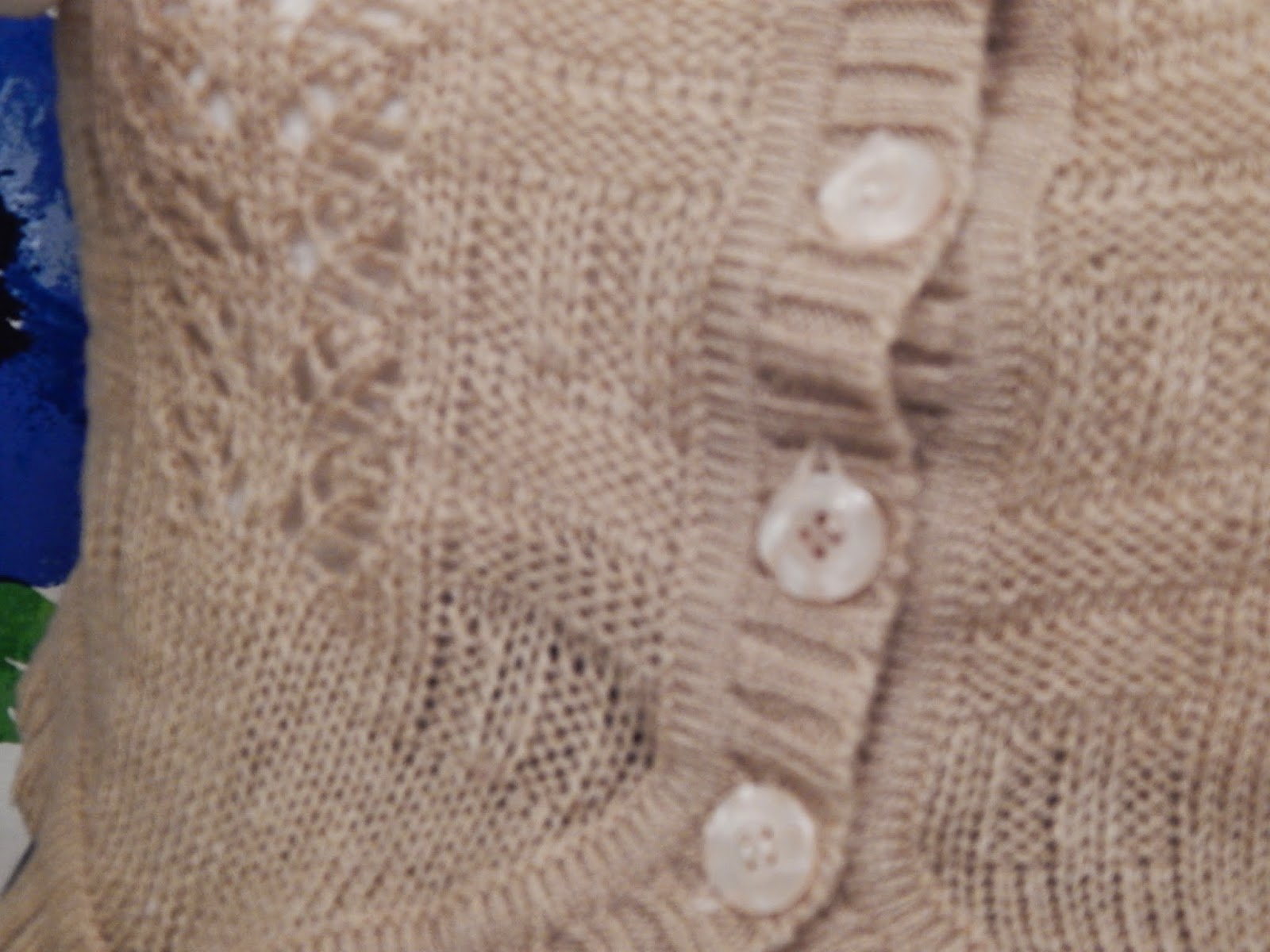 This is my, "downtime." If I don't stop and watch the nighthawks, or the spiders, or nicely knit details-if I don't do it now, when will I? I can focus on a task easily enough, but focusing on the unnecessary? Who has time for that? I should, I should, but I rarely do. I won't argue my life would be better for watching spiders spin webs (if being in possession of a history degree has taught me nothing else it is that sitting and watching spiders spin webs can give you all sorts of crazy ideas, but I digress) or migrating birds, but I would almost certainly be better for the un-allotted time. Children know how to improvise, or at least they did until we started micromanaging their playtime. 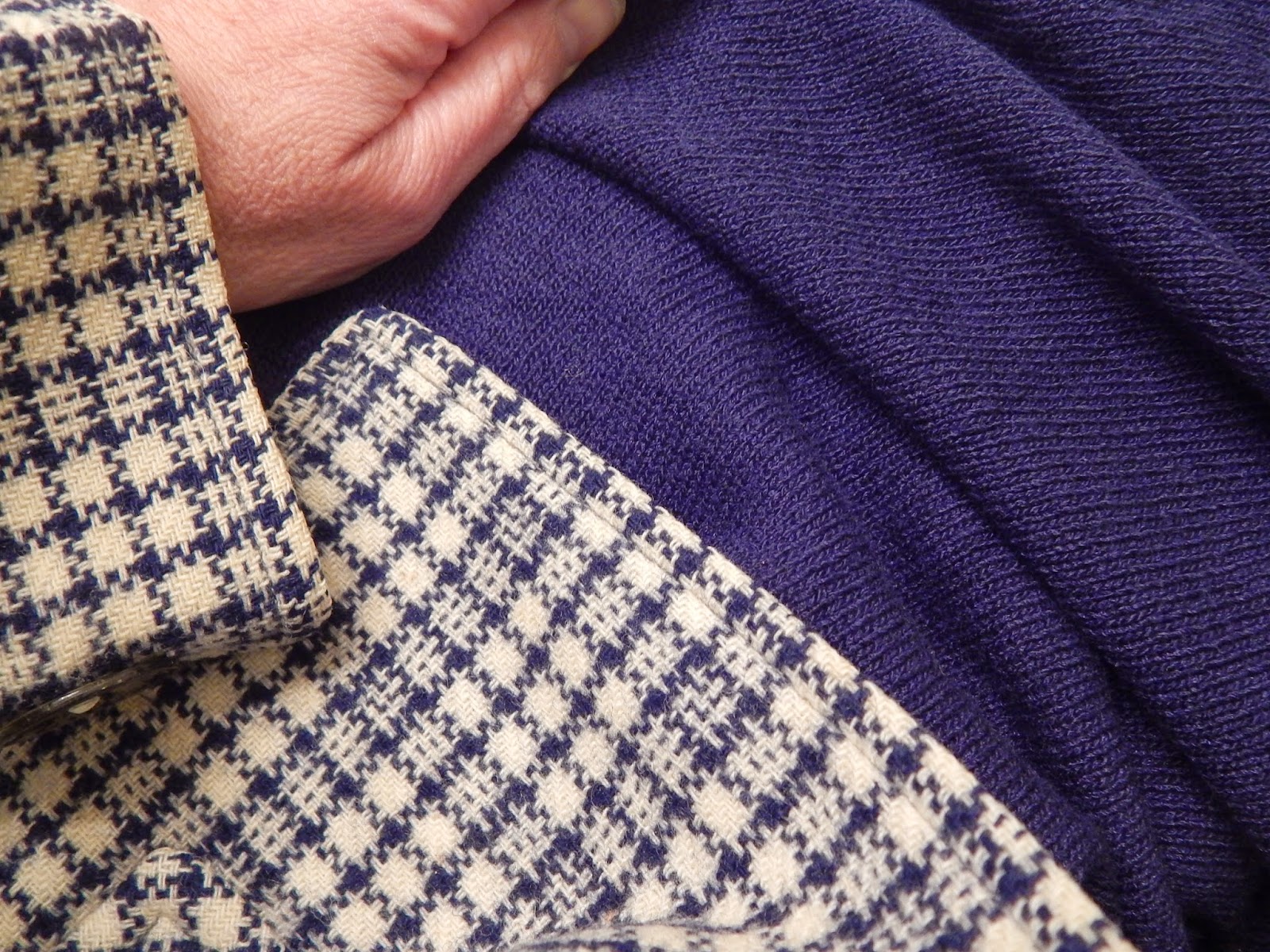 Data are not details. The numbers on my asthmatic/allergic child's flow metre taken over time tell a story, but they don't tell  how you go on living between attacks. The metre won't tell you how much joy he experienced seeing the first Flicker (a sort of woodpecker) in the park, or winning a blue ribbon at the fair. The pile of medications on the powder room vanity taken together tell one story, but an hour with a happy, excited, engaged child tells another. The data look bad, but the details look completely different. I try not to obsess on the numbers, because he clearly doesn't. 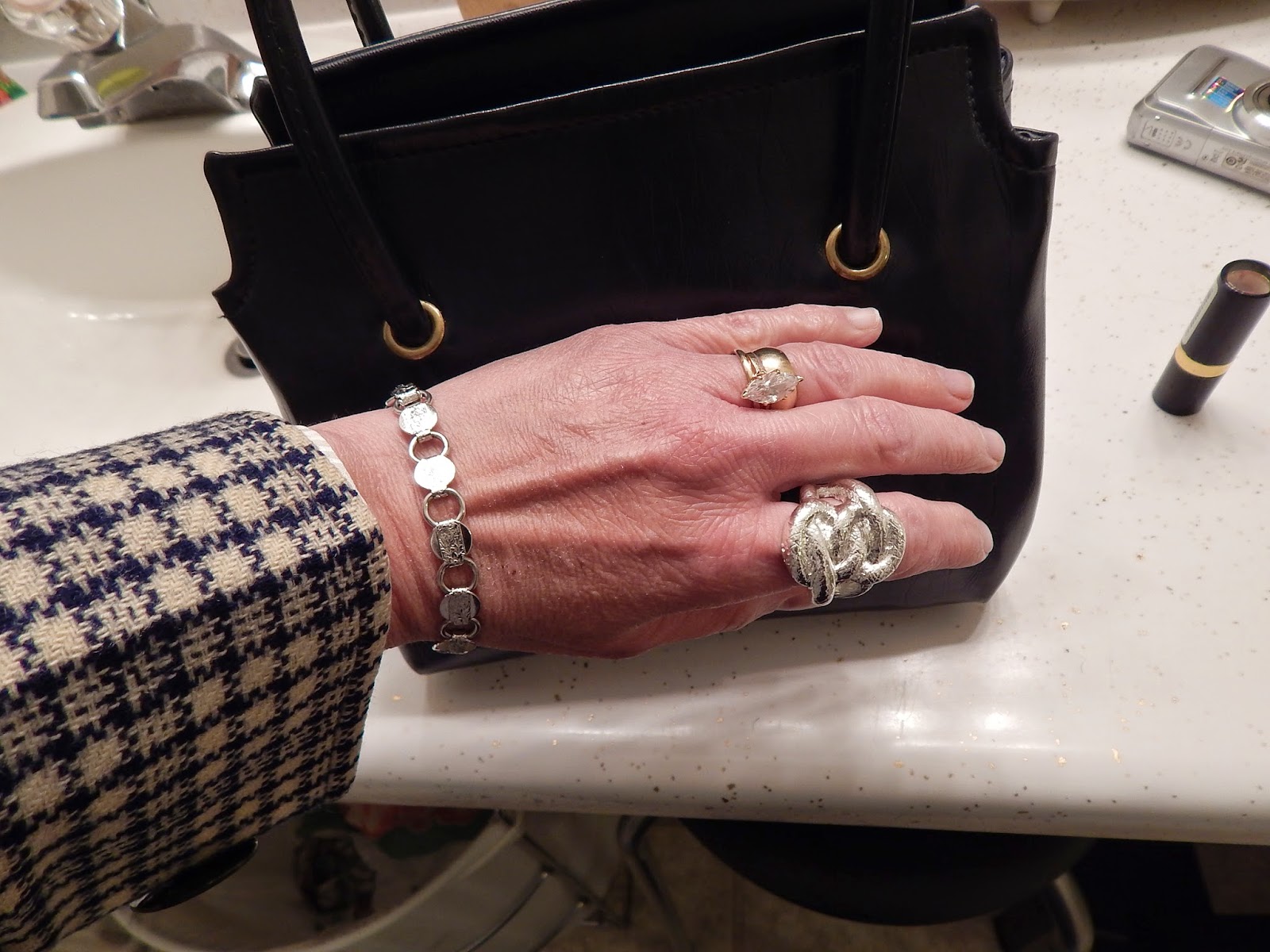 That's all this blog is, really. Collecting details, putting them down, part of the whole, viewed post-by-post. Is there a "point?" Probably not, or at least not something I'm intelligent enough to recognise. Here it is, my kitchen larder and bedroom wardrobe spilled out in dated format for...*shrug* entertainment? Perusal? Distraction? Fodder for trolls? Well, they're mine-meatless lasagnas matching bags and shoes, and all. 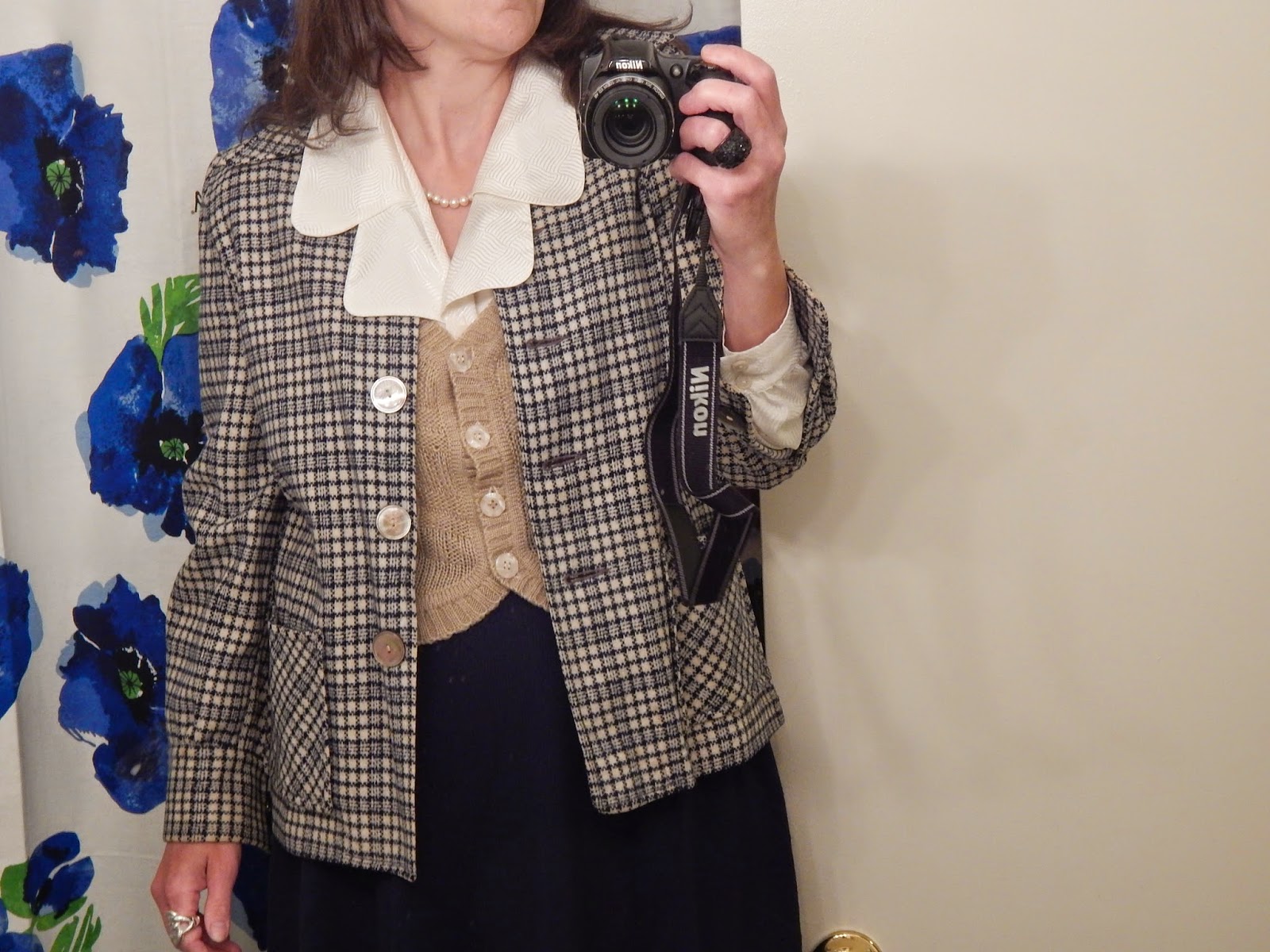 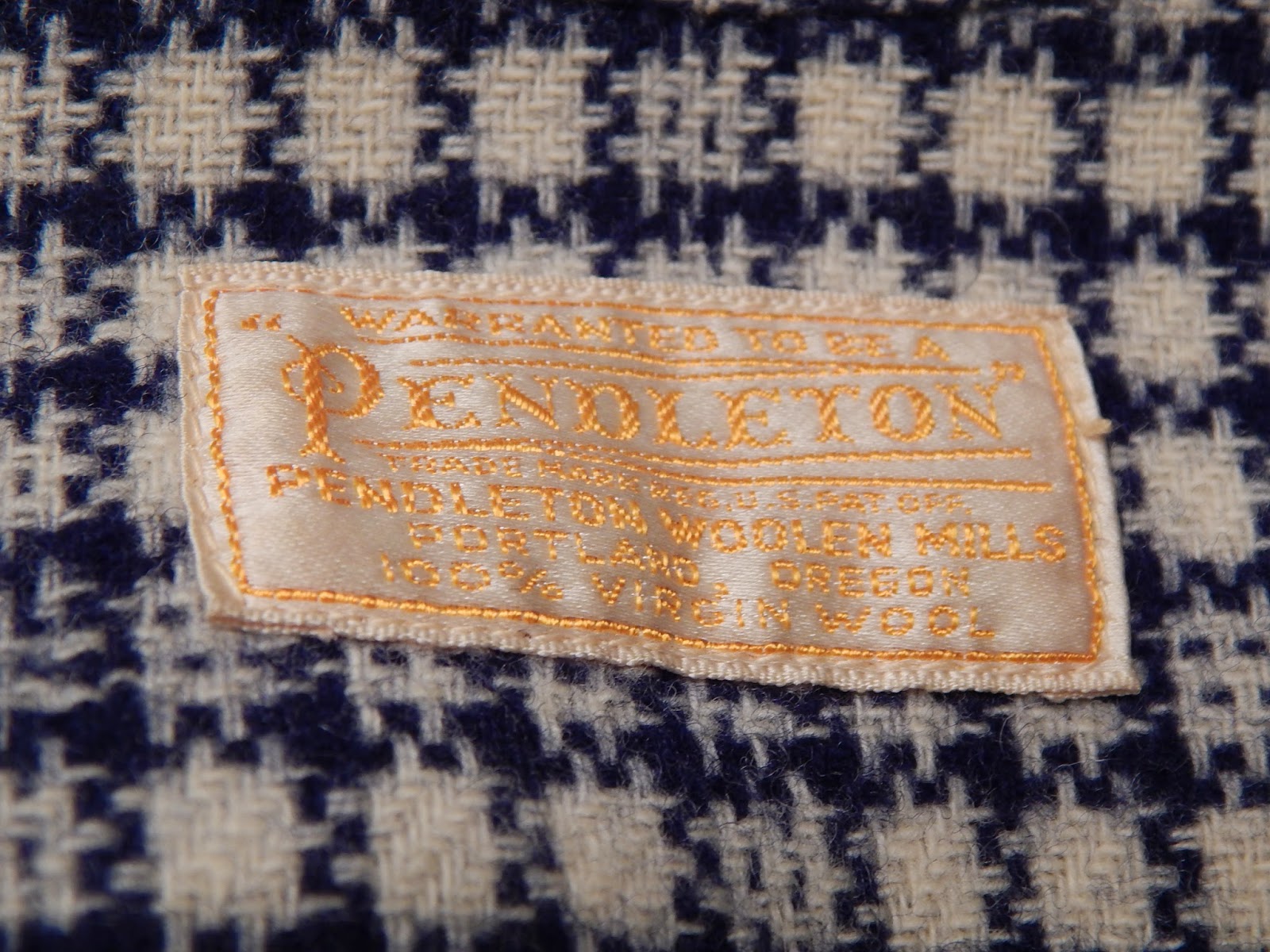 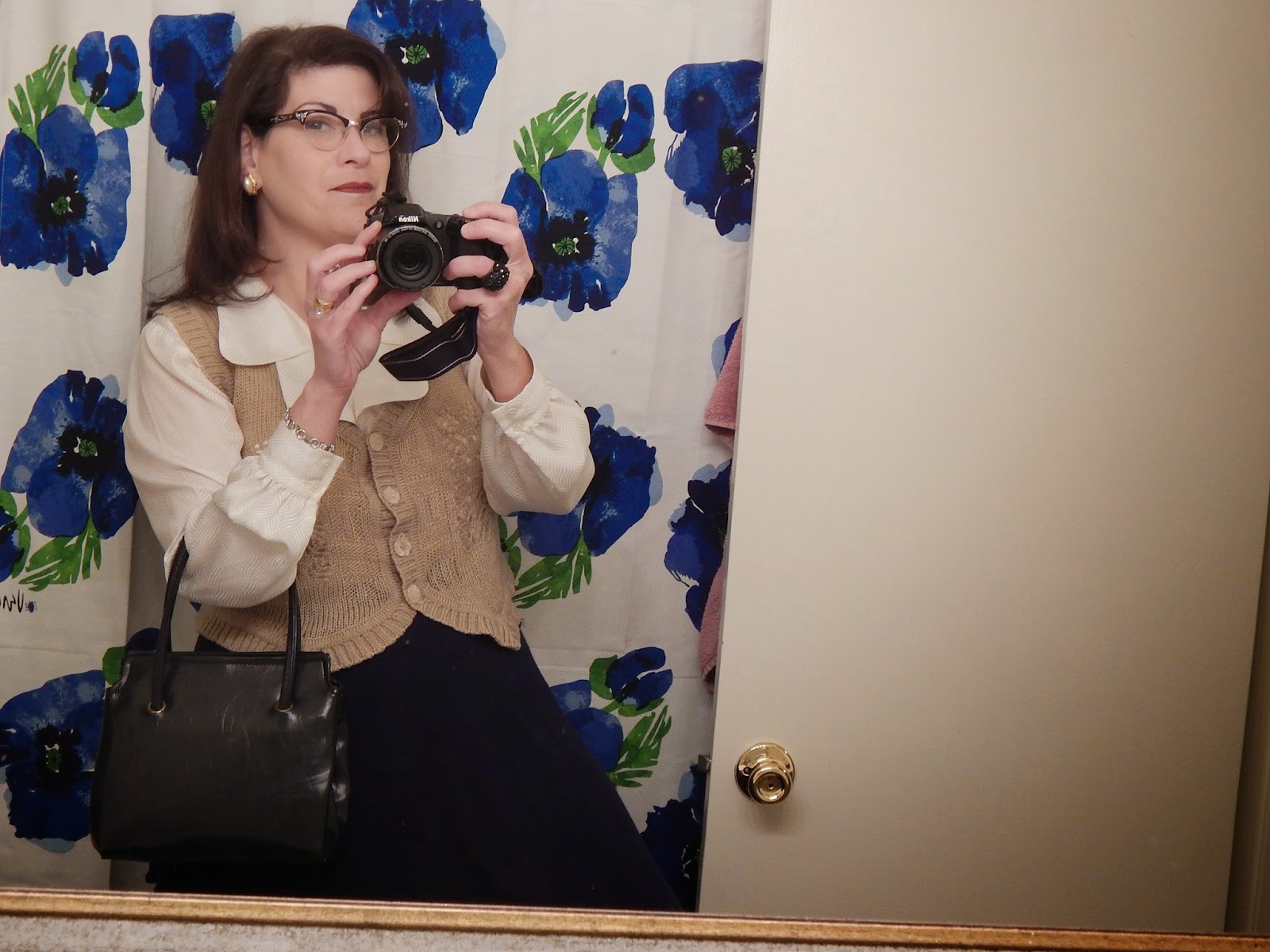 I have so many tiny squares cut out for Danny's Birthday quilt that they're overwhelming to look at. I know, as does the spider that getting overwhelmed at the pile of fabric, or the pile of apples that need canning, or the books, worksheets, or the web that must be spun...there's an equally tall pile of clichés to fling at them, but clichés and platitudes make me want to punch people-and that won't get the quilt sewn or the applesauce canned. I may have inadvertently resorted to a few in this very post (please don't punch me)which shows just how insidious that shit is! 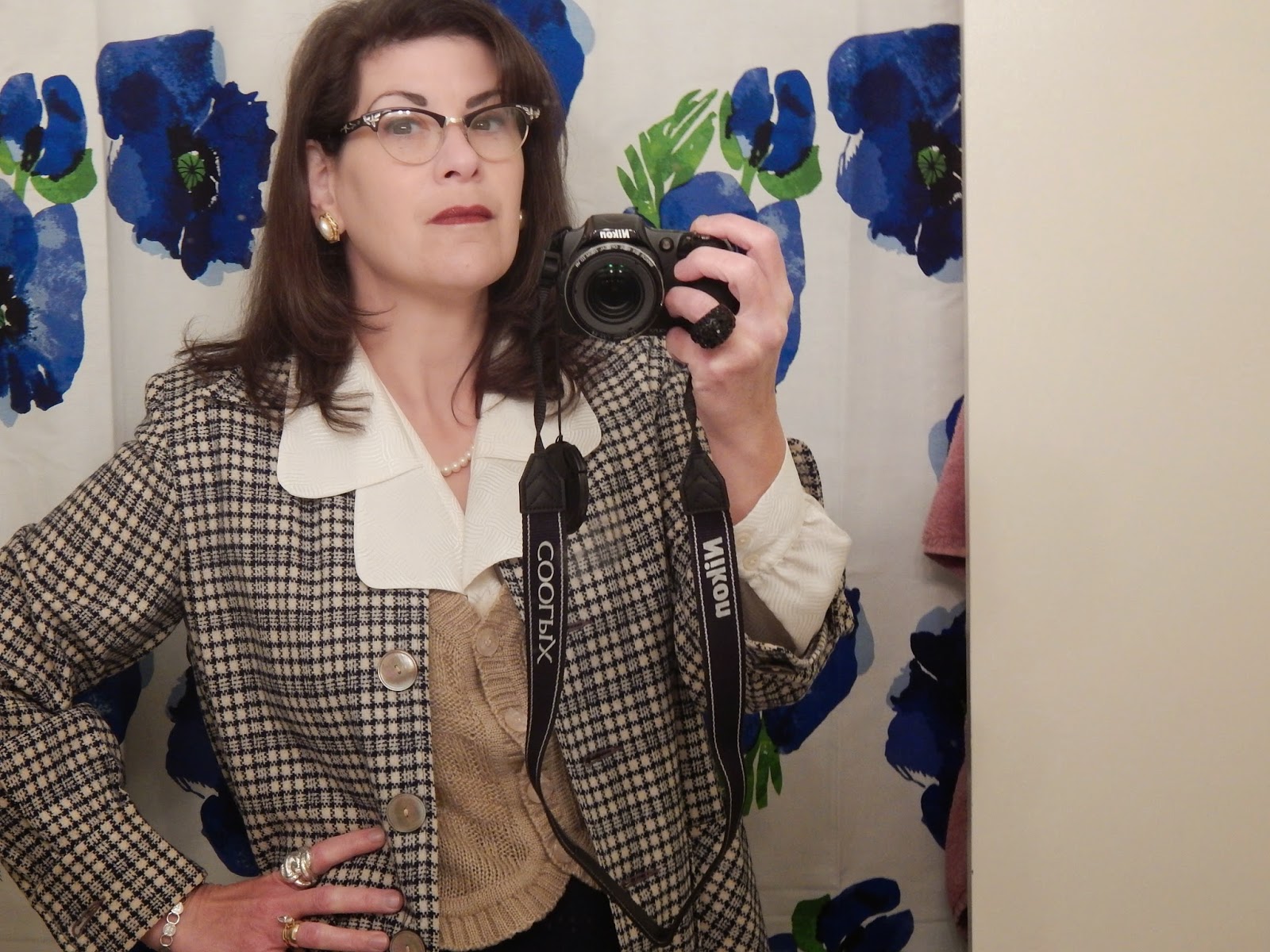 I'm going to learn to work the camera's details too. It won't happen right away, so don't worry-there will still be plenty of the fuzzy, out-of-focus photos you've come to love. First, I have to figure out how to deal with the strap and lens cover because having them hanging is annoying. I think I can take it all off and just replace the lens cap when I'm done. I'm pretty good with keeping track of things-I managed to keep a baby fed and clean, I can remember to replace a lens cap. Manufacturers underestimate the consumer's abilities.

This is a nighthawk, if you are out at dusk try looking up. 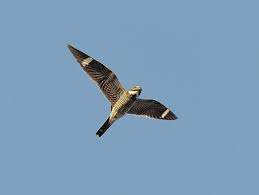 Or perhaps you prefer your Nighthawks on the melancholy/sci-fi side... 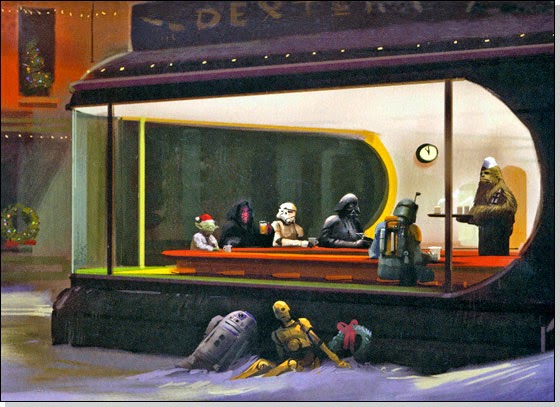 With apologies to Edward Hopper.

Time.
The reason I could never go back to a 'real job' again.

I always look forward to the birthday quilt posts. The cake too. Fodder for the trolls? Reading your antics and tantrums is as much a part of my routine as doing laundry on Sundays. It's consistent!

You're organised enough to just do laundry on Sunday? I'm in awe!

Thank you for the kind words (they're rather needed today)and the friendship.

Danny was cold tonight and asked for another quilt. "Which one?" I asked. Tired, he mumbled something that sounded like, "All of them." He got Star Wars, and Monopoly ;)

I, for one, am so glad you blog. You are, as the kids used to say, "way cool." Also, I covet your jewelry and hats.