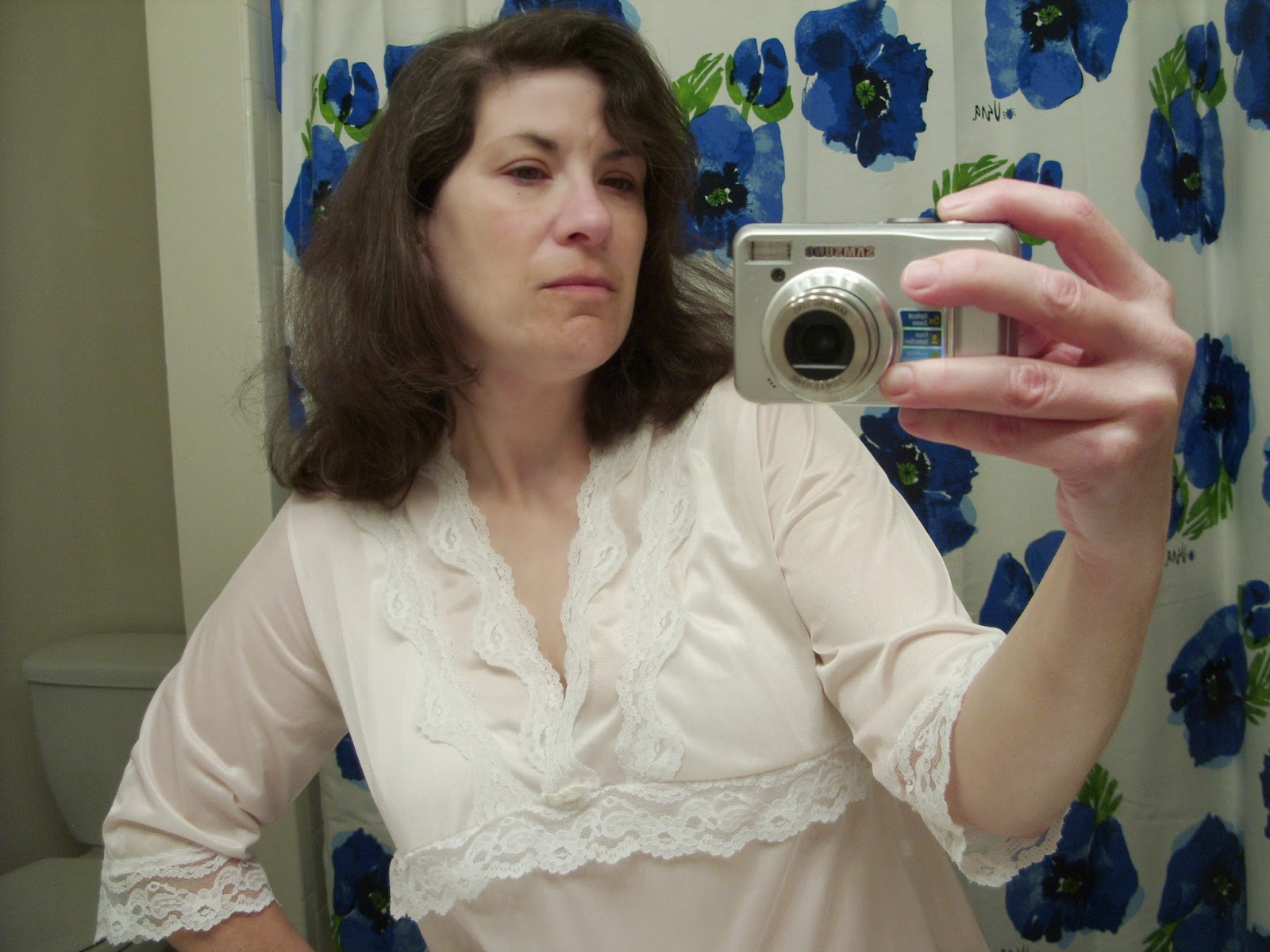 Here I am at the end of a day that started with a kitchen fire Mr. ETB managed to start attempting to boil water for coffee (got it out without too much damage, but oh the smell of smoke!) and ended with the high wind knocking my car door into the massive SUV parked next to me (in the wrong direction, and partly in my space) causing a miniscule scratch that sent the owner into hysteria. I gave  her my insurance info, called my insurance company, and that was that. My god how she freaked out over what was at most 1/16th of an inch scratch. I dunno, maybe she thought it was deliberate. Anyway, that's what insurance is for, but I could have done without the whole bit where she whipped out her camera phone and started taking photos of my car, Danny, myself, and my insurance card. I think if you're that obsessive about your car maybe you shouldn't park it incorrectly (and backwards) in a crowded lot on a very windy day. 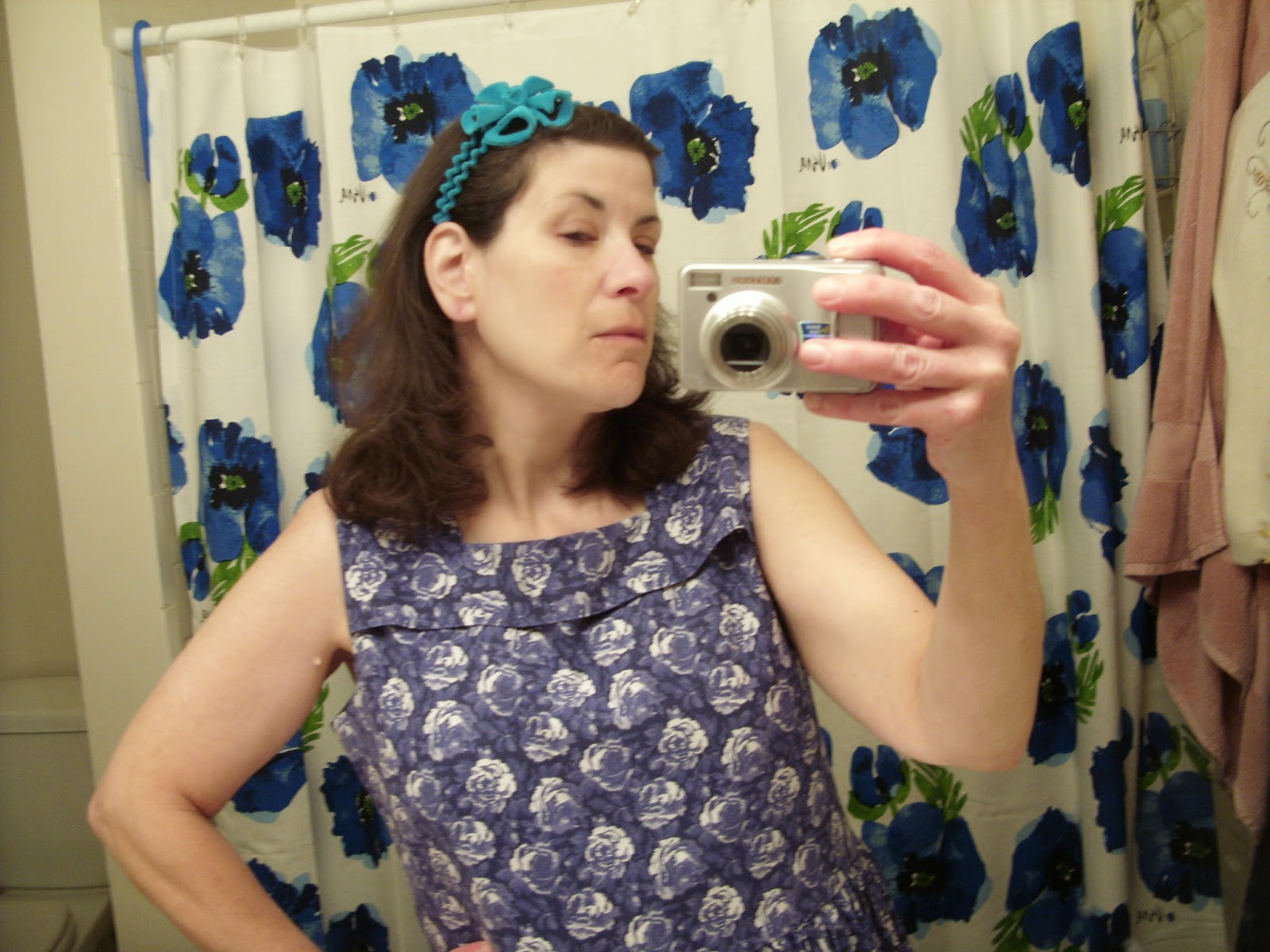 But in-between those events, I had a rather interesting thrifting day. It got hot again, so I wore this Laura Ashley dress that (like most Laura Ashley) dresses adds about 30 pounds to my appearance. Do I care? Don't be silly. Look at those lovely roses on the print. And no, I didn't wear the headband out-I just washed my face. 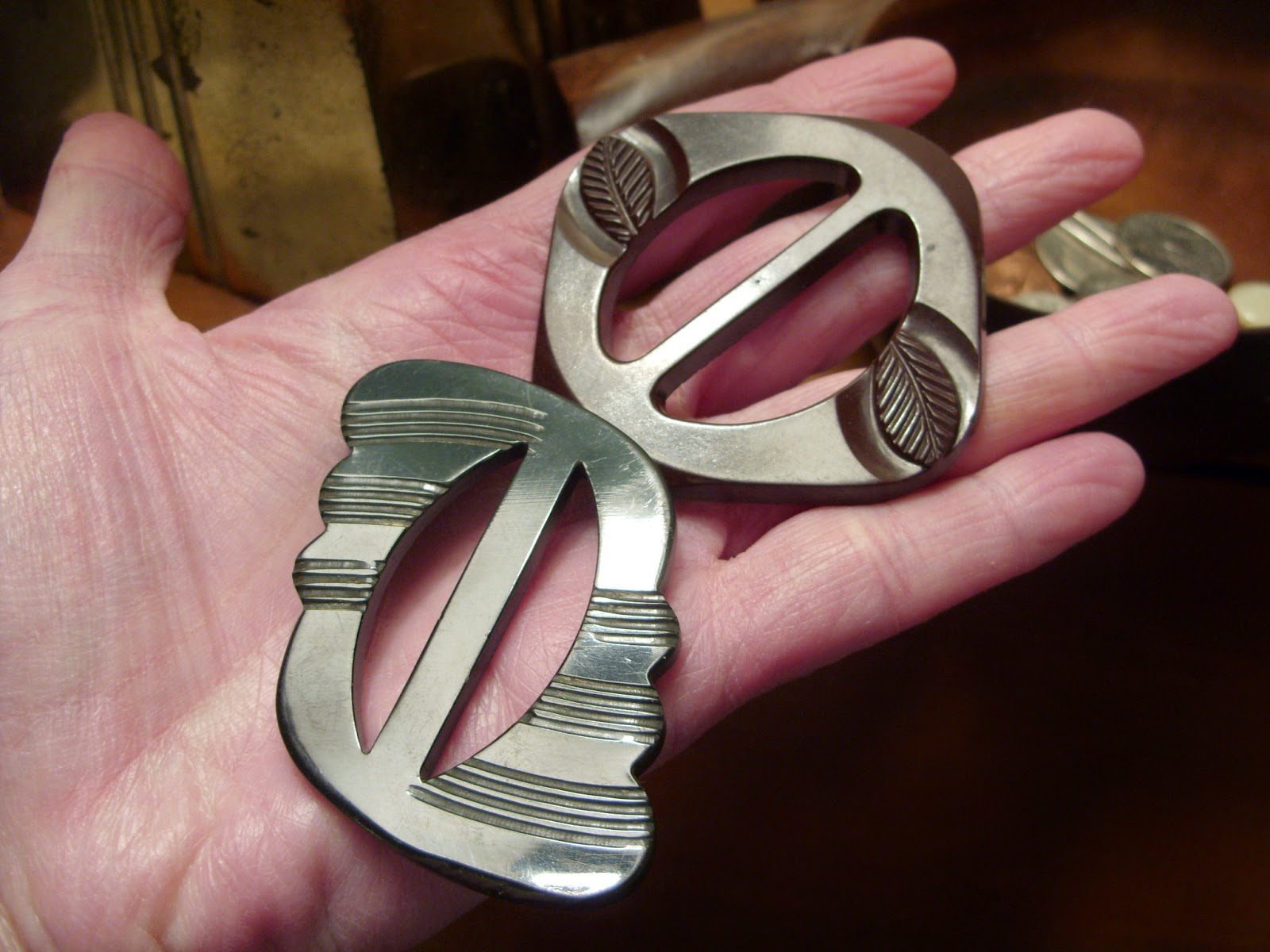 First stop was the Sarpy County Historical Society Garage Sale. This is a yearly event that runs three days. Items are all donated, and were the sewing gods ever good to me today! The two Bakelite buckles above were in a box of sewing notions for $2.00 There were celluloid buckles as well, and glass buttons, fasteners, zippers, pom-pom trim, and other good stuff. 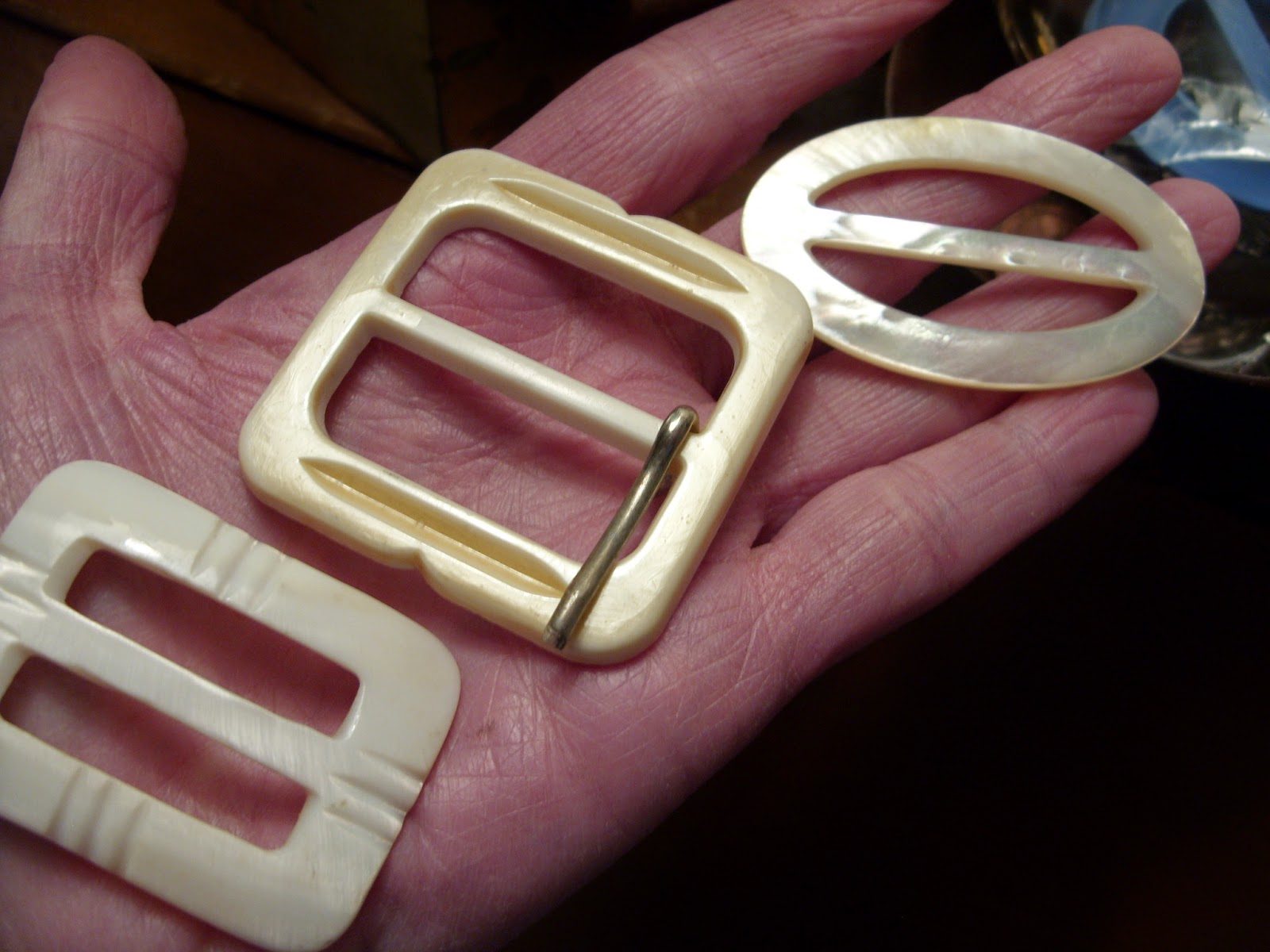 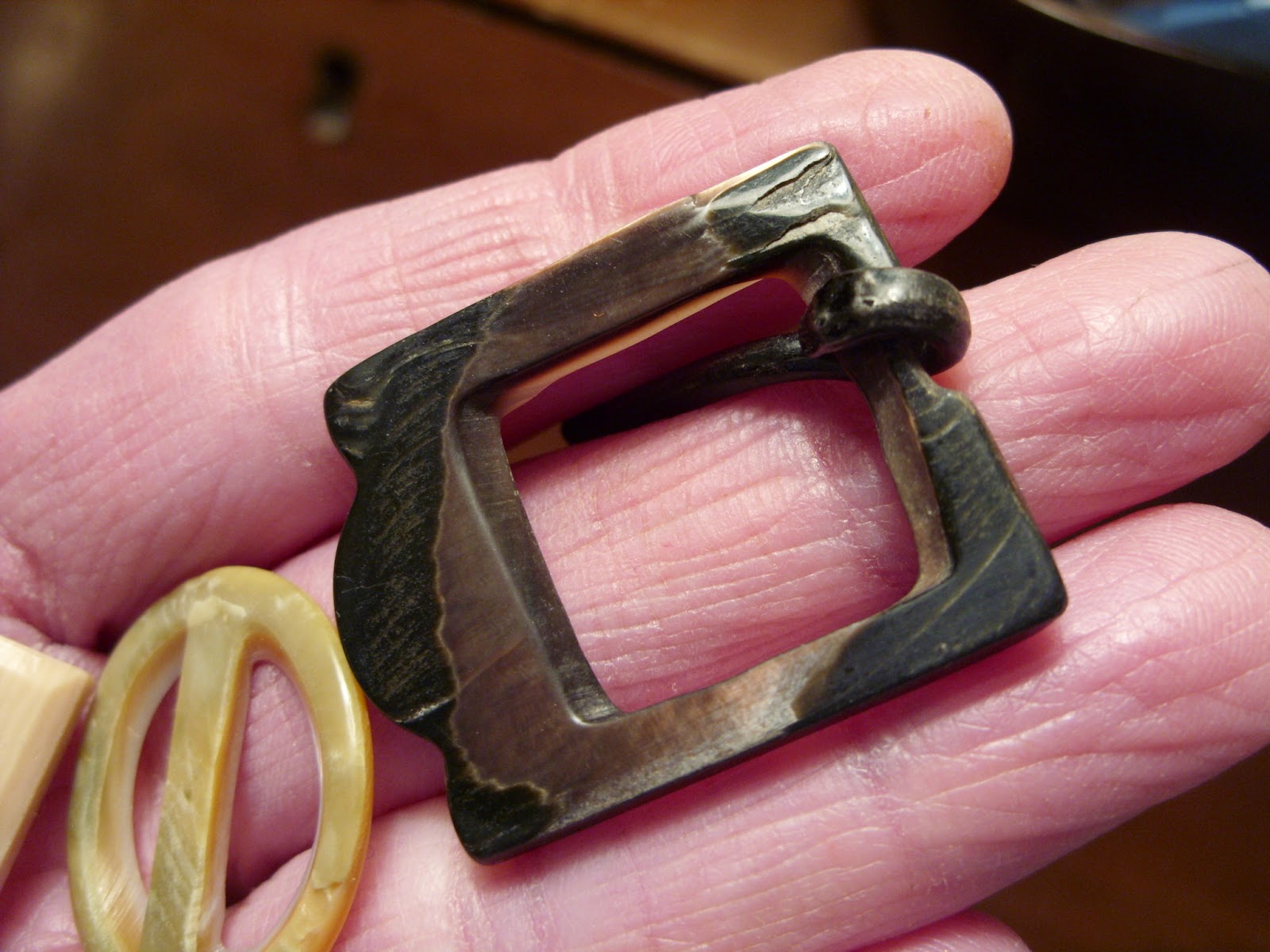 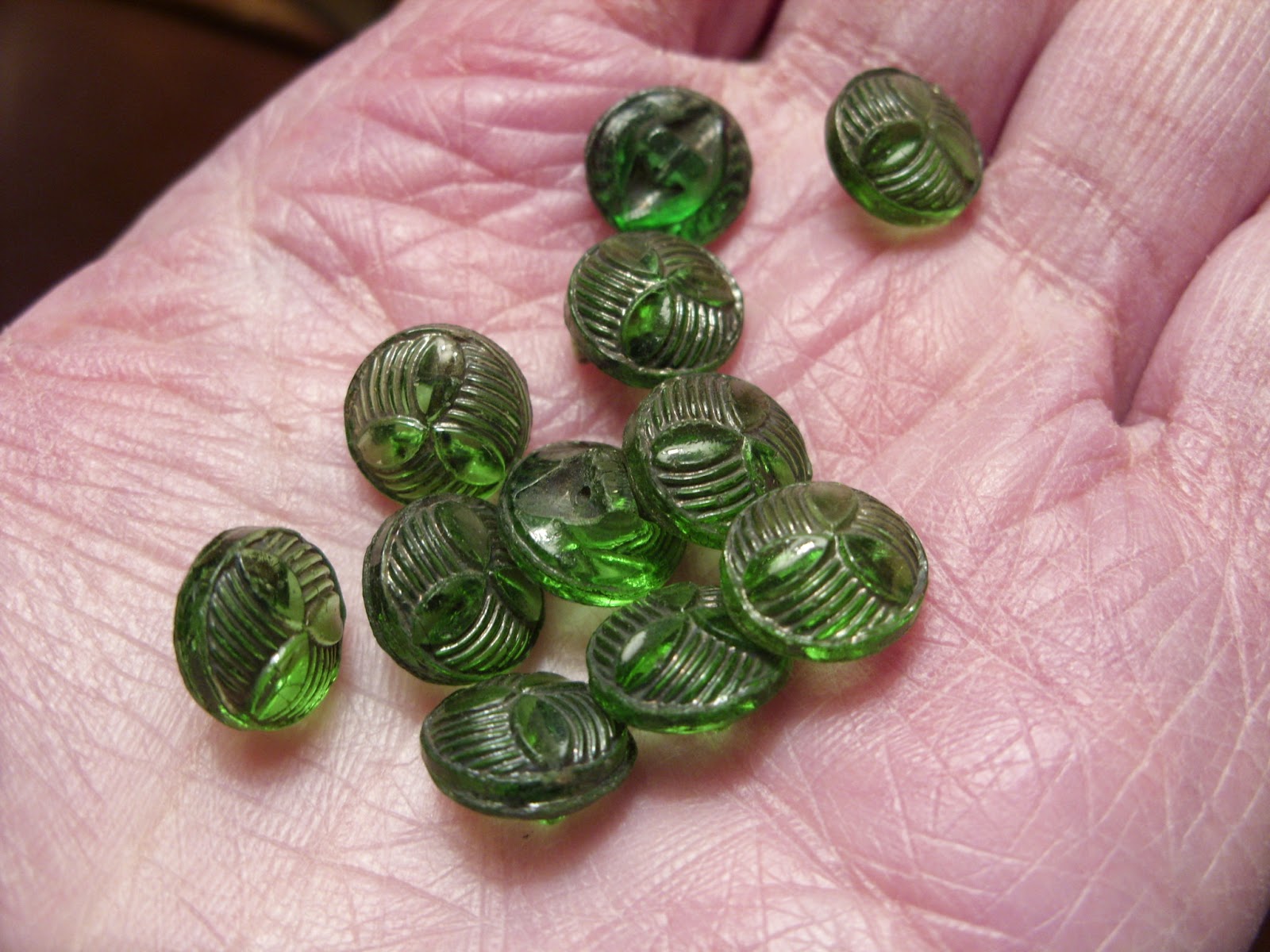 I like to think these were my reward for getting lost, and driving around Belleview for an hour trying to find the place. It should have been a 15 minute drive. Oh well, nothing else to do as I couldn't stay at home until the place was aired out from smoke. While we were driving around, we passed the building where the long-gone abortion clinic was. To my surprise, there were people lined up in front of the place praying. That clinic has been gone a long time-I wonder if it is just a matter of routine, or if they are praying for the embryos? Opinions about abortion aside, I find it fascinating that the people continue to hold a vigil at the location after all these years. That's real devotion to be out there when no one is there. Anyway, once we found the sale it was, as always worth all the trouble. 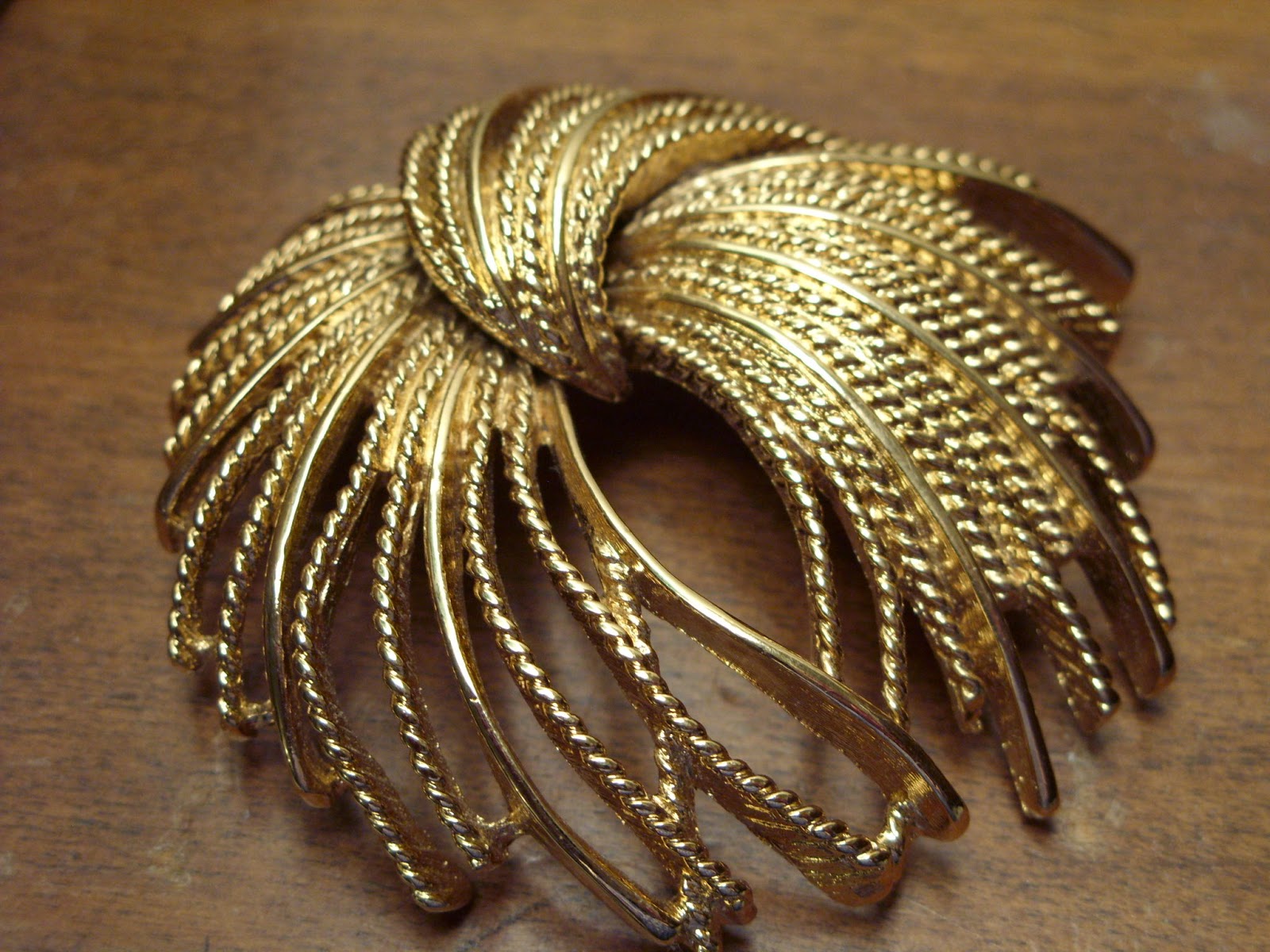 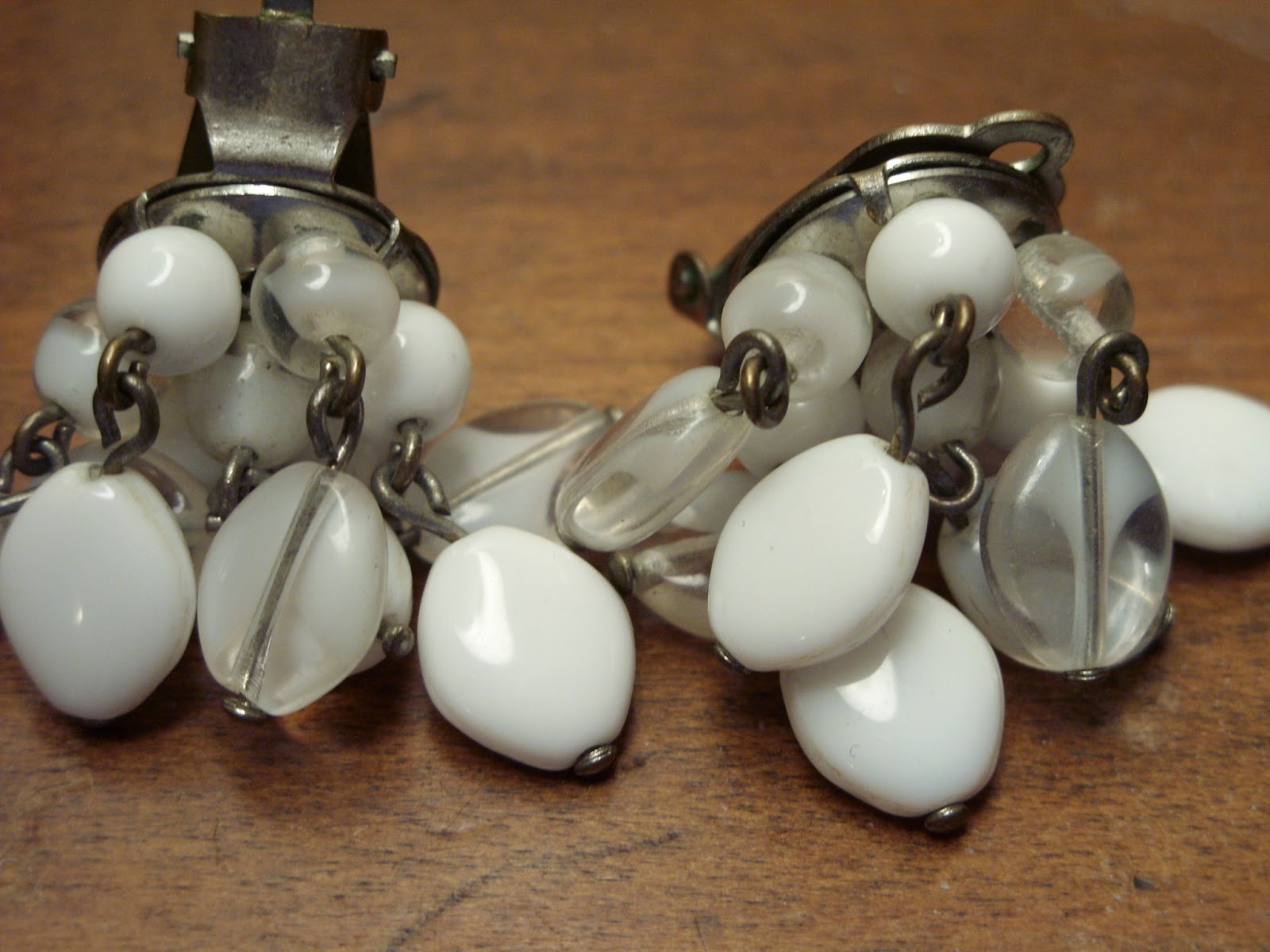 Such beautiful rings. The Monet ring on the bottom right could use re-plating, but I will wear it and enjoy it anyway. 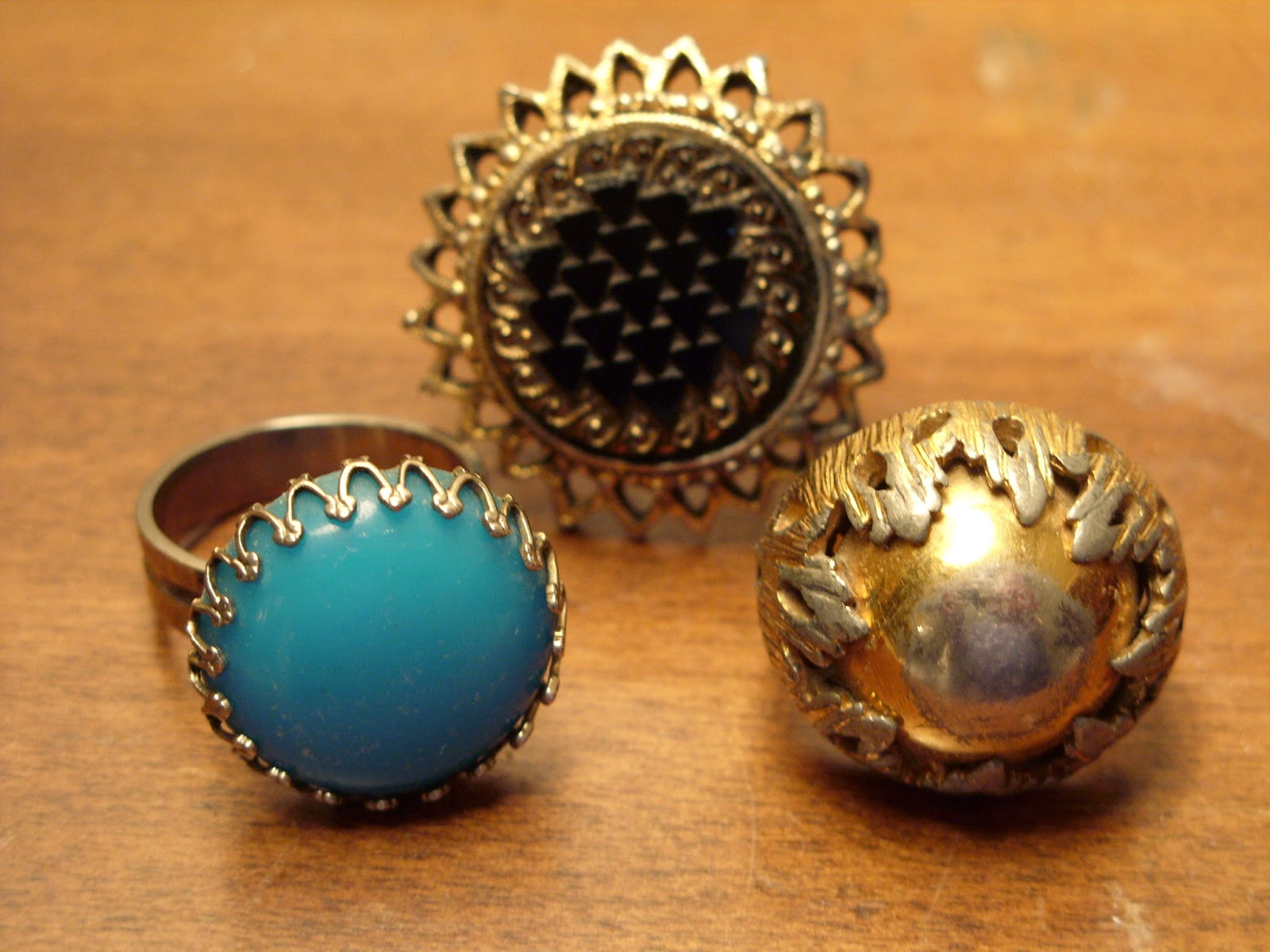 Hey! That's me in the ring's reflection. 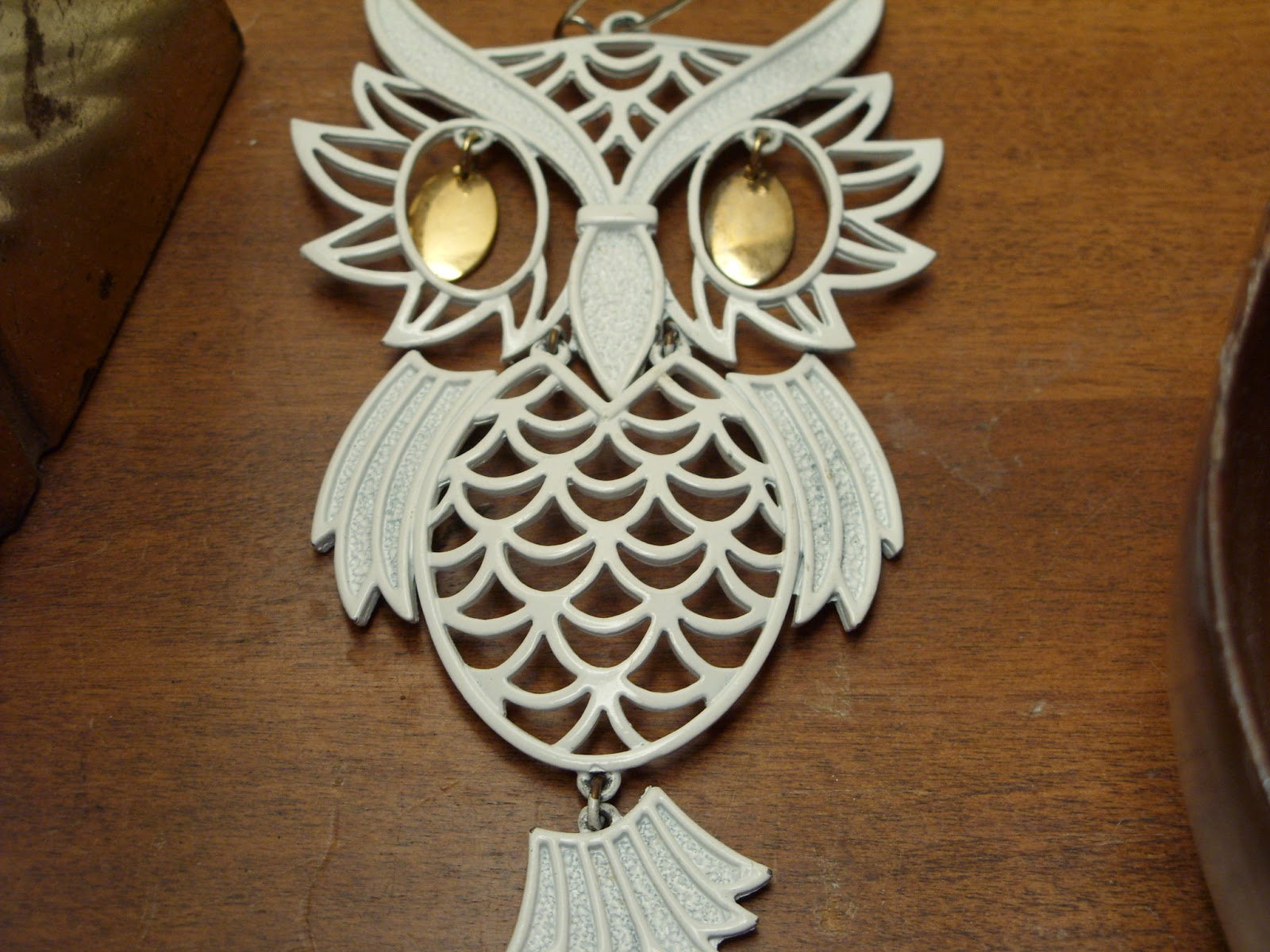 Owl bet you want to know where I went next (I'll be getting my hat now...) 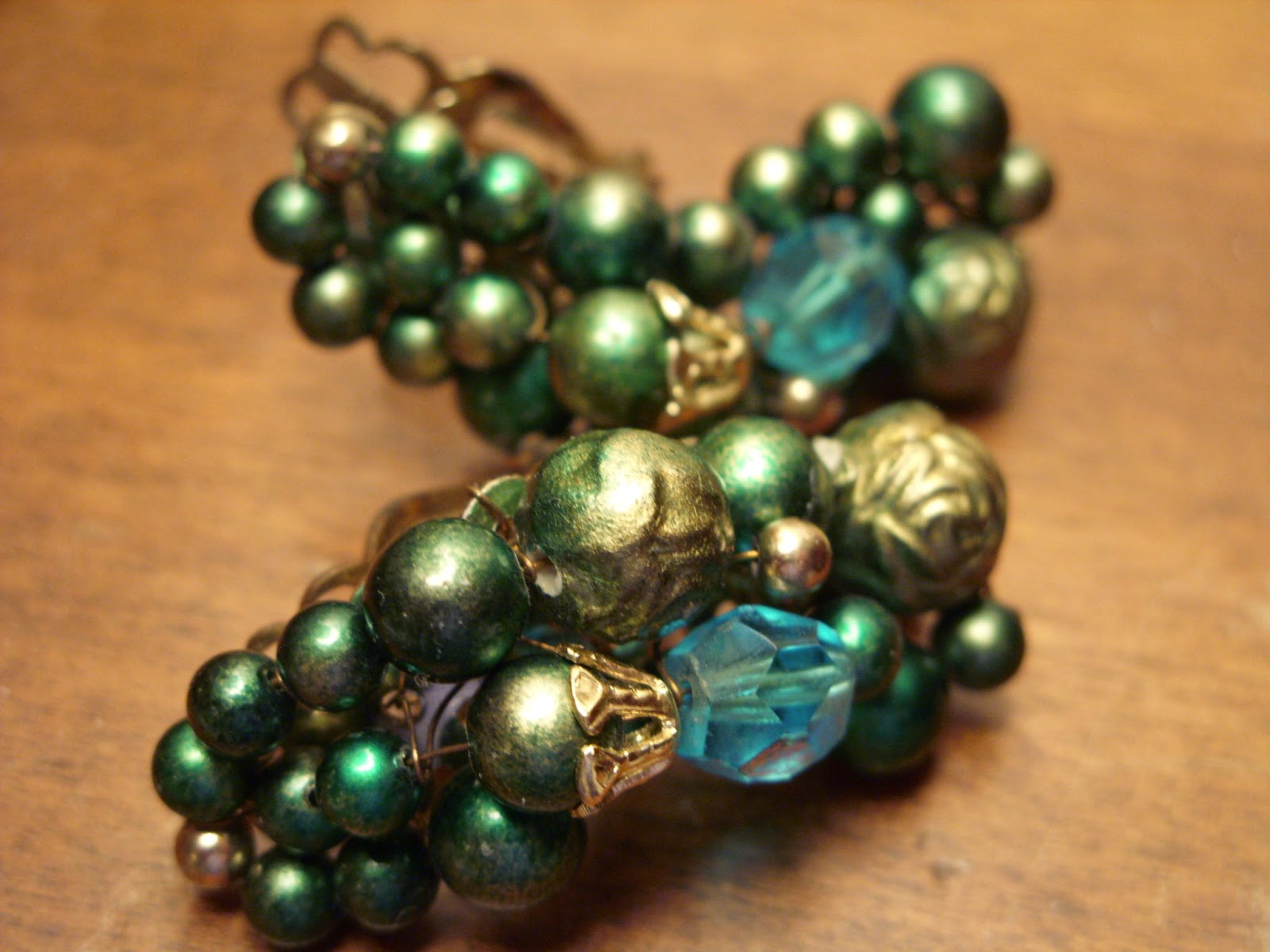 We stopped at Hand-Me-Ups, and I found all sorts of great clothing, games, and fabric but it was these earrings that really caught my eye. $1.99 is a bit more than I like to spend for clip-ons, but they were so pretty, I splurged. 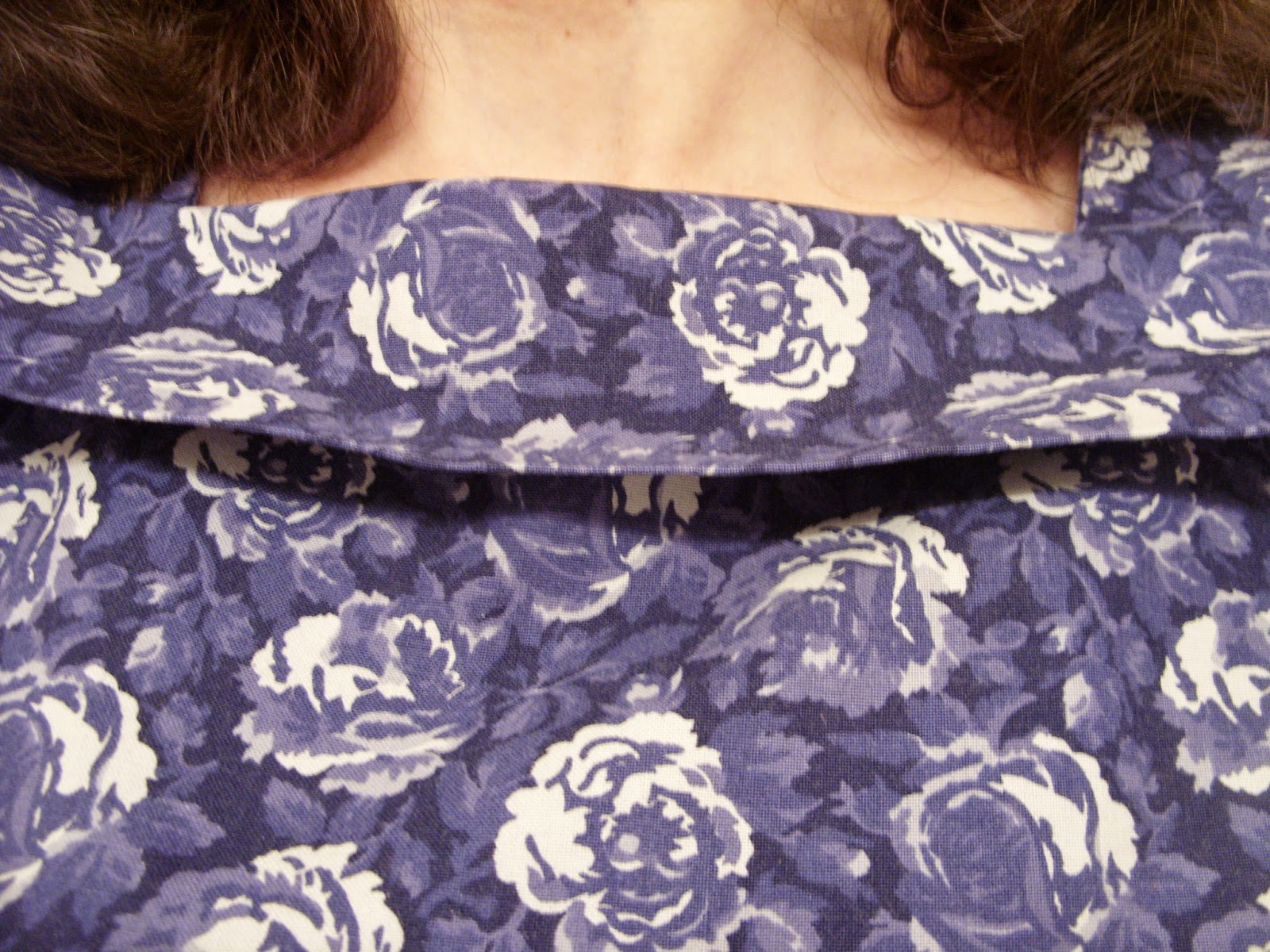 It would have been a terrific day had it not started and ended in quite such dramatic ways. I told Mr. ETB he's not allowed to make coffee anymore.
He can still play the Arthur Brown record.
Posted by Goody at 9:04 PM
Labels: Bakelite, Hand Me Ups Store, Sarpy County Sale, sewing, The Crazy World of Arthur Brown, vintage

You look so sweet in your Laura Ashley frock, I half expected a bit of bird flipping to be going on. Did you flip one behind your back to the witch whose car you DAMAGED!! Some people?? Seriously she was over the top with photos, how was photographing Danny going to help? You always find some good bits when out, I do like the rings. Hey I am well known for getting lost in my own town!!

Oh geez. Americans & their 'perfect' cars.
I almost forgot about that.
As a pharmacist I used to drive an old Toyota truck to work - when you work in a pharmacy be it retail or hospital you KNOW most of the client are going to be ill sighted seniors & you expect dings & dents in a pharmacy parking lot.
Working in Marin county was the absolute worst, some of the tantrums invoked by me deigning to park my battered truck next to their swish & expensive new BMW or whatever it was were just hilarious. And of course being Marin that posh new vehicle had to be parked in some asinine way that took up 3 spots. If I have to park inches away from you in my jalopy because you felt entitled to hog 3 parking spaces TOO EFFIN' BAD & do take a pic of me giving you the middle finger salute.
Enough of my rant.
Love the peacock colored bead clip ons, I'd pay $1.98 for that.

@Sue
I was flipping her off in my mind ;)

@Bernice
I spent 13 years living on a farm covered in mud and am familiar with the hosing down method! Of course I didn't bother with cosmetics out there, so that was one step to skip in a routine. The headband is covered in a strange flocked material that isn't quite velvet and comes off in my hair. I ought to bin it, but I bought two, and like the hand mixer that only has two gears that still work, I feel obligated to get every last bit of life out of it.

@Bibi
You'd think a brand new car would be durable enough that the paint wouldn't just peel away at the slightest contact. If I were spending $40,000 on a vehicle, I'd expect a better paint job. I don't know how you survived the Bay Area-I'd have killed someone after a week.

Good grief, the drama! Are you completely sure Mr ETB didn't start the fire delicately, just to get out of ever having to make coffee again? Seems a little drastic, but I am have a suspicious mind...
The shouty hysterical car lady - ugh, can't be doing with her.
The jewellery you found is fantastic, and those buckles and buttons are just wonderful. Nice work, Ms Juniper!
PS. I feel a bit guilty for being all "Gawd I couldn't be arsed" about baking. I do understand why you do it, and why you can't just stroll into a supermarket and buy ready-made (shop-bought, my mum would say, with a slight sneer...) so I'm sorry if I came across as thoughtless and insensitive. Me and my big mouth... xxxx

No worries-I didn't take offense at all. I joke that my retirement plan when Danny moves out is to relocate next to a pizza parlour that delivers (or a taqeria) and never cook again! So no, not at all insensitive.

For the most part I don't mind the cooking/baking I just hate making candied fruit.