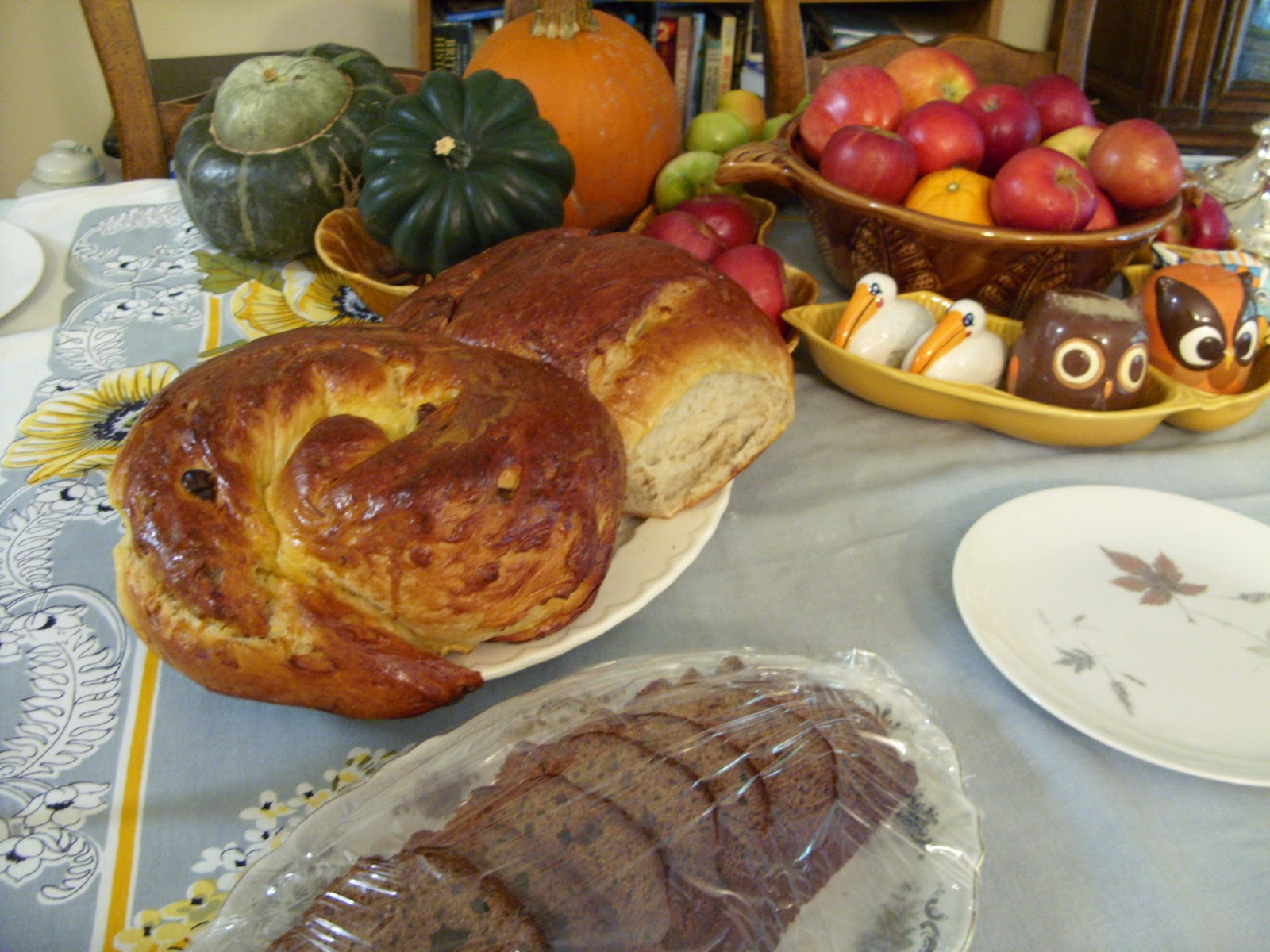 I outdid myself with the challah this year. Dried cherries, mixed spice, chopped apples and boiled cider (right) and raisin/saffron (left). What I lack in shaping ability I make up for in taste. To be fair though, coiled loaves are more difficult than they look. 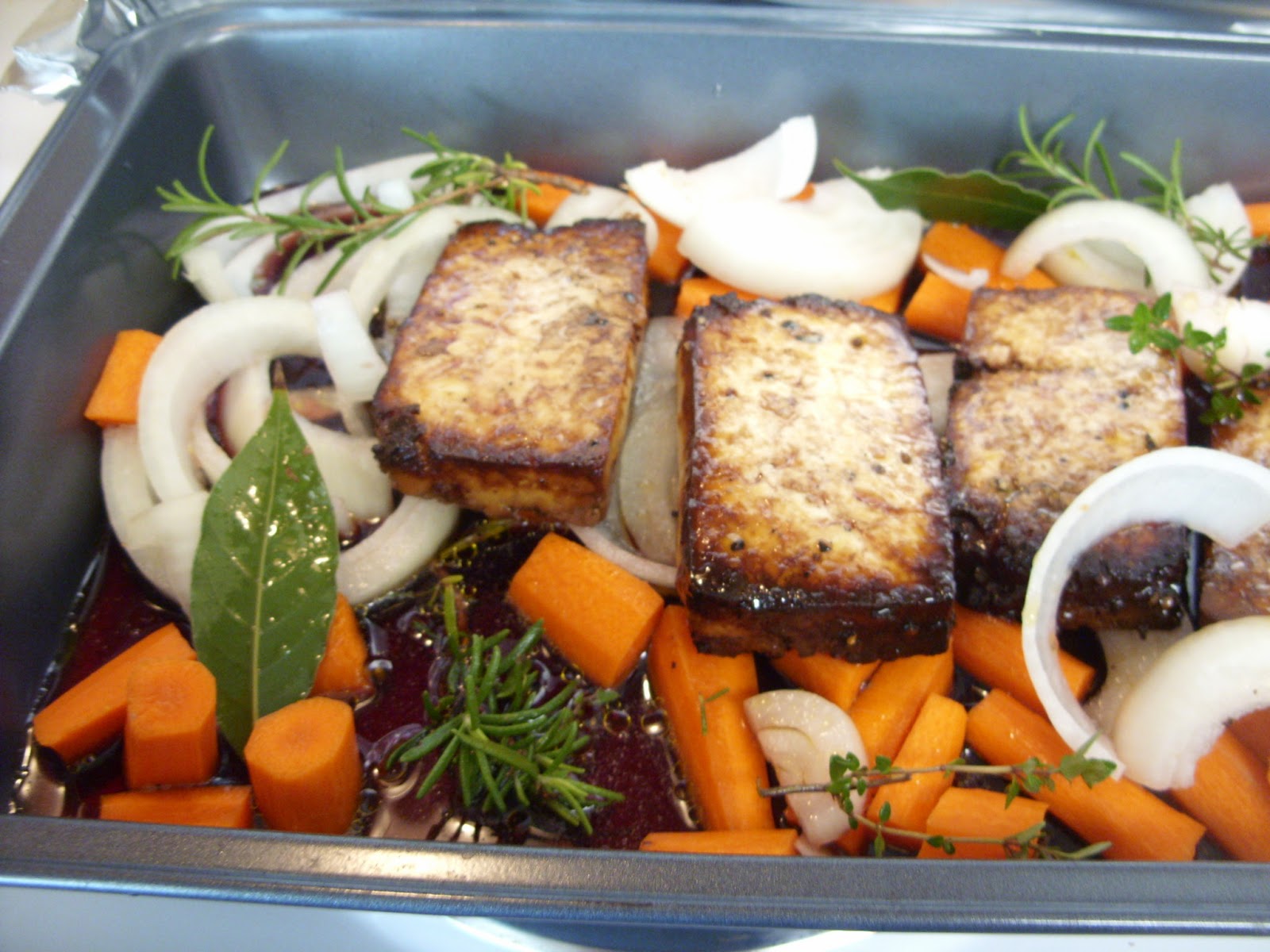 The tofu, "brisket" had to be cooked in stages with the potatoes being added at the end. I'm sure anything cooking in wine would smell like a roast, but even knowing it was tofu, I did find myself thinking it smelled like holidays when I was a child-and my mother sure as hell wasn't cooking tofu! 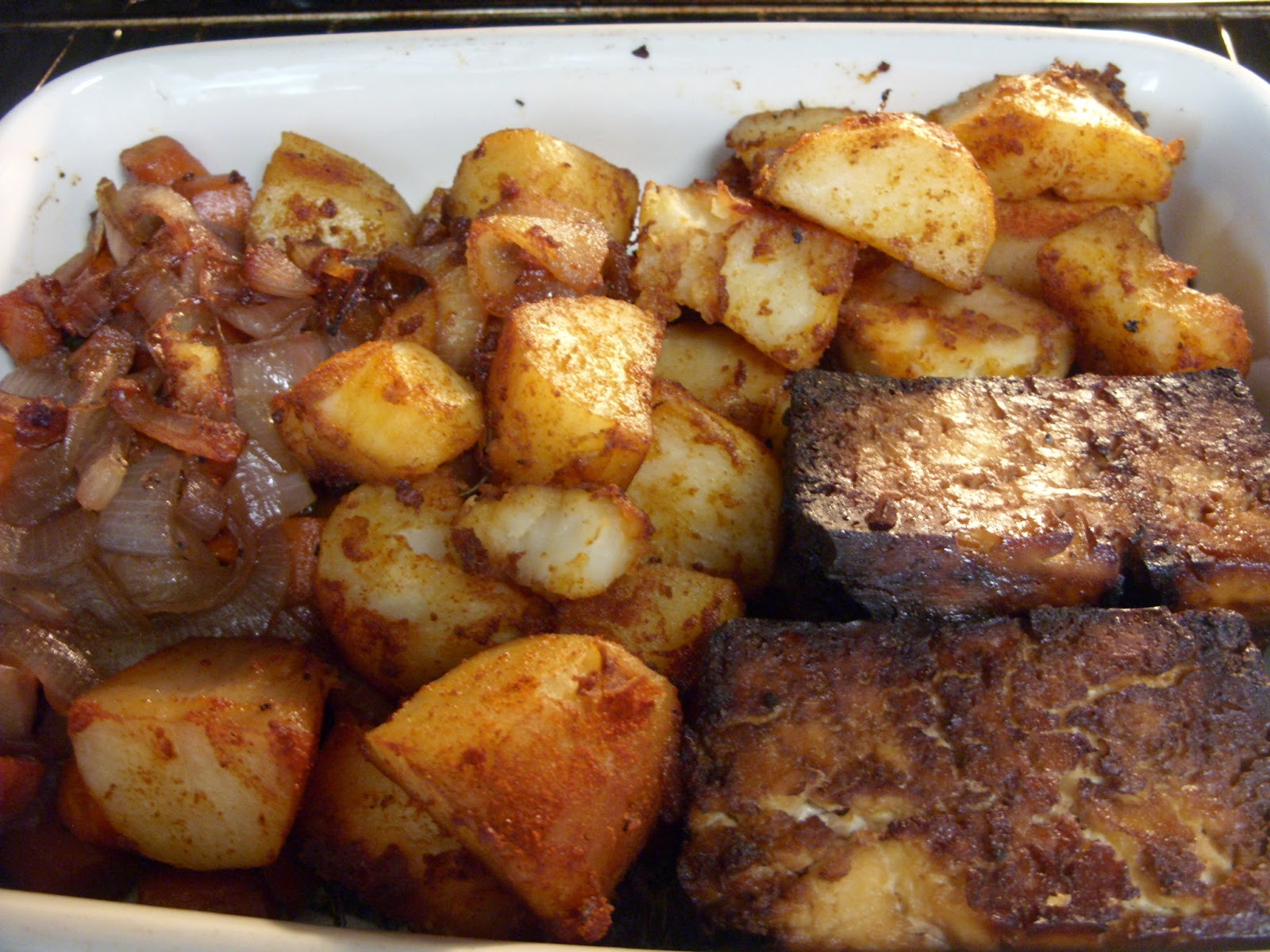 Then came the vegetarian kreplach soup. This is basically a won-ton, but I used soya mince for the filling. The dough is a bit tricky to roll, but once you get the hang of it, it isn't too terrible. It took about 30 minutes to make 20, and now I have plenty for the freezer. 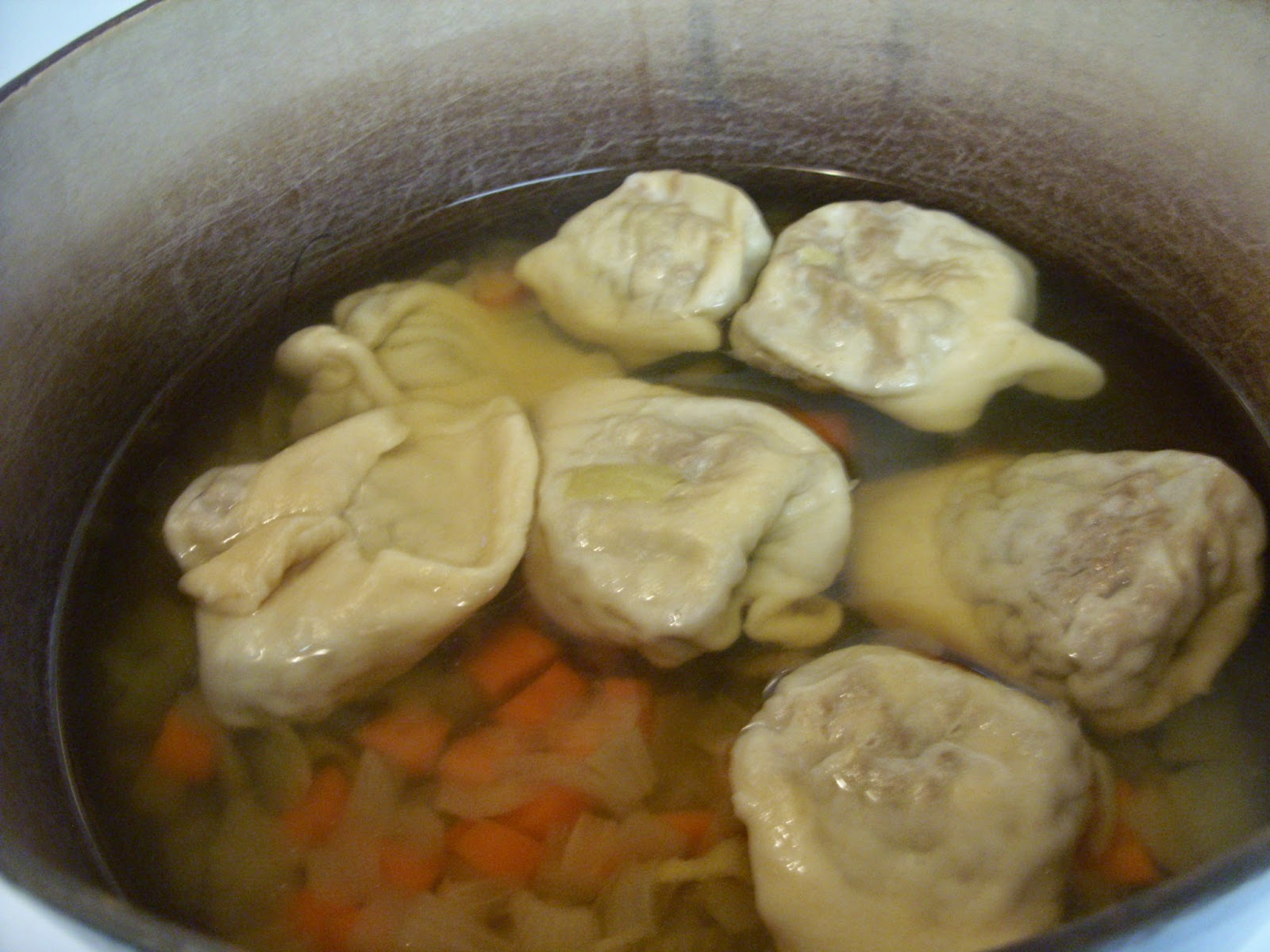 I finally had the opportunity to use my new dishes. The pattern is called, "Tumbling Leaves" which seemed appropriate for an autumn holiday. 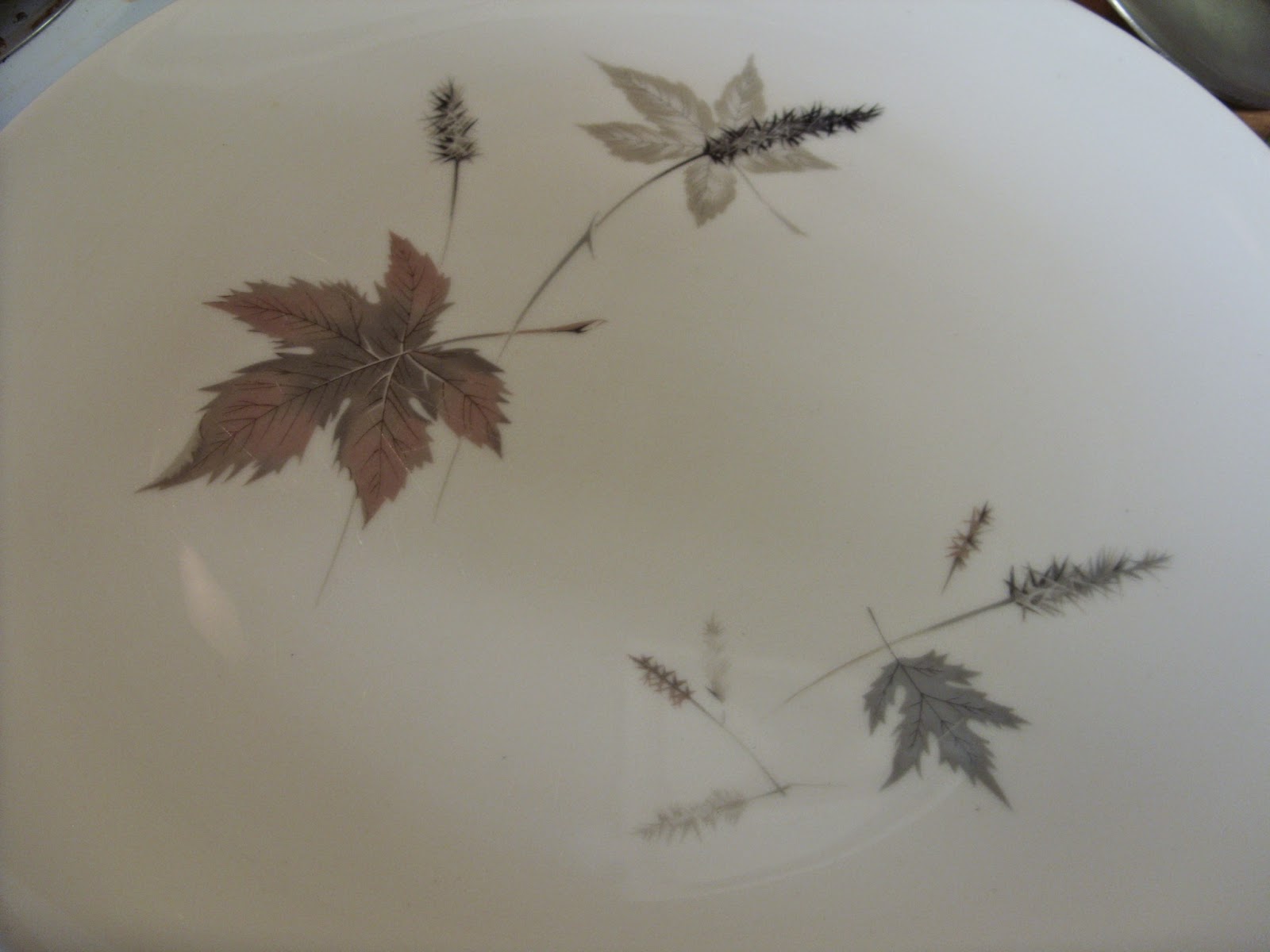 The Goodwill in Council Bluffs was selling these for .50 cents a piece. I bought the set-would have been foolish not to. The pattern goes well with my regular china (Friendly Village by Johnson Brothers) but I think I'll keep it for special occasions. 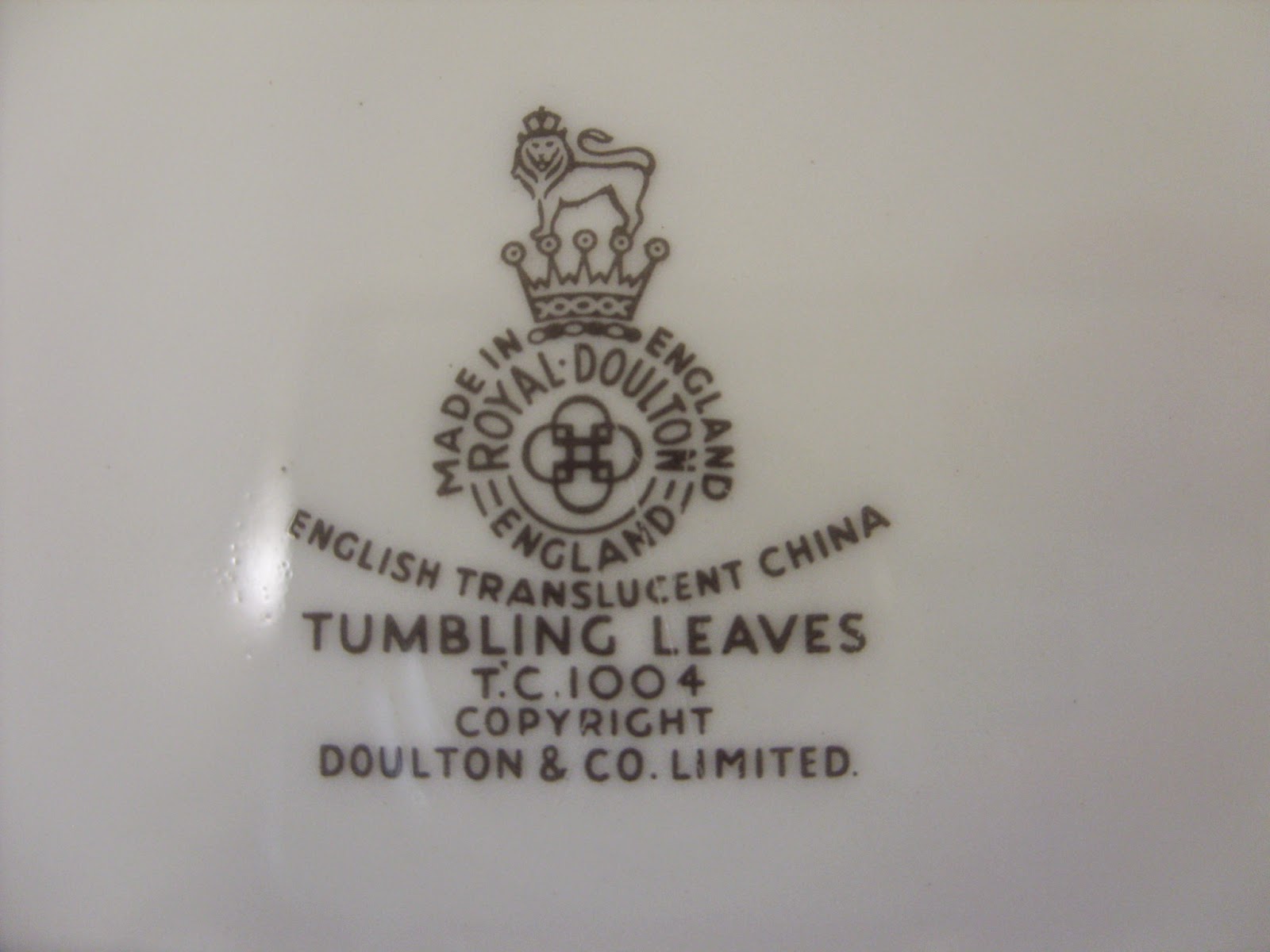 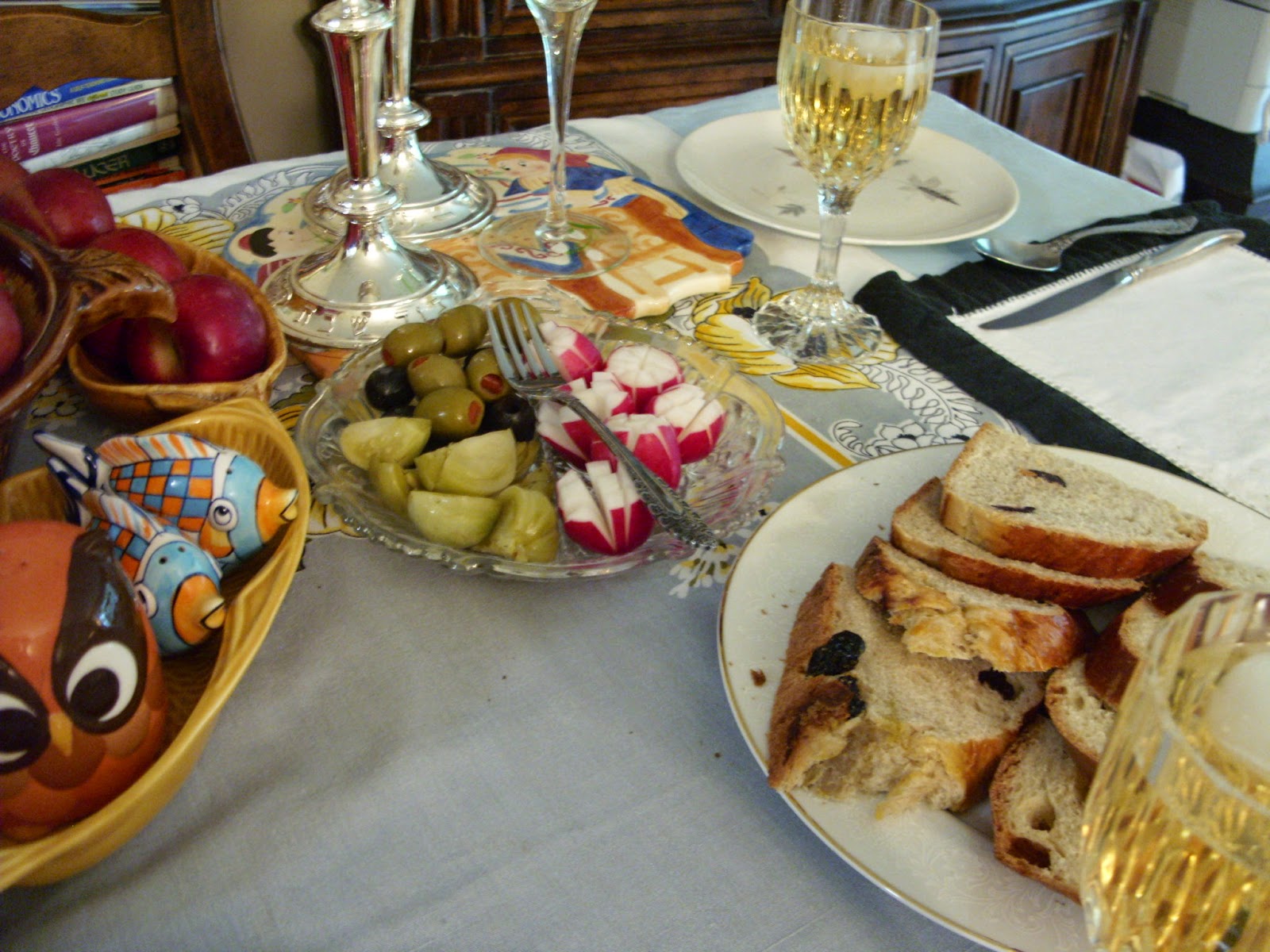 I attempted garnishing. My radish roses didn't fully open (although they sat in cold water for hours) but Danny was impressed and anything that gets a nine year old boy to eat three radishes is probably worth the fuss. He said they were unusually good radishes, but come on-they came in a bag already trimmed at the supermarket. I credit the garnishing. 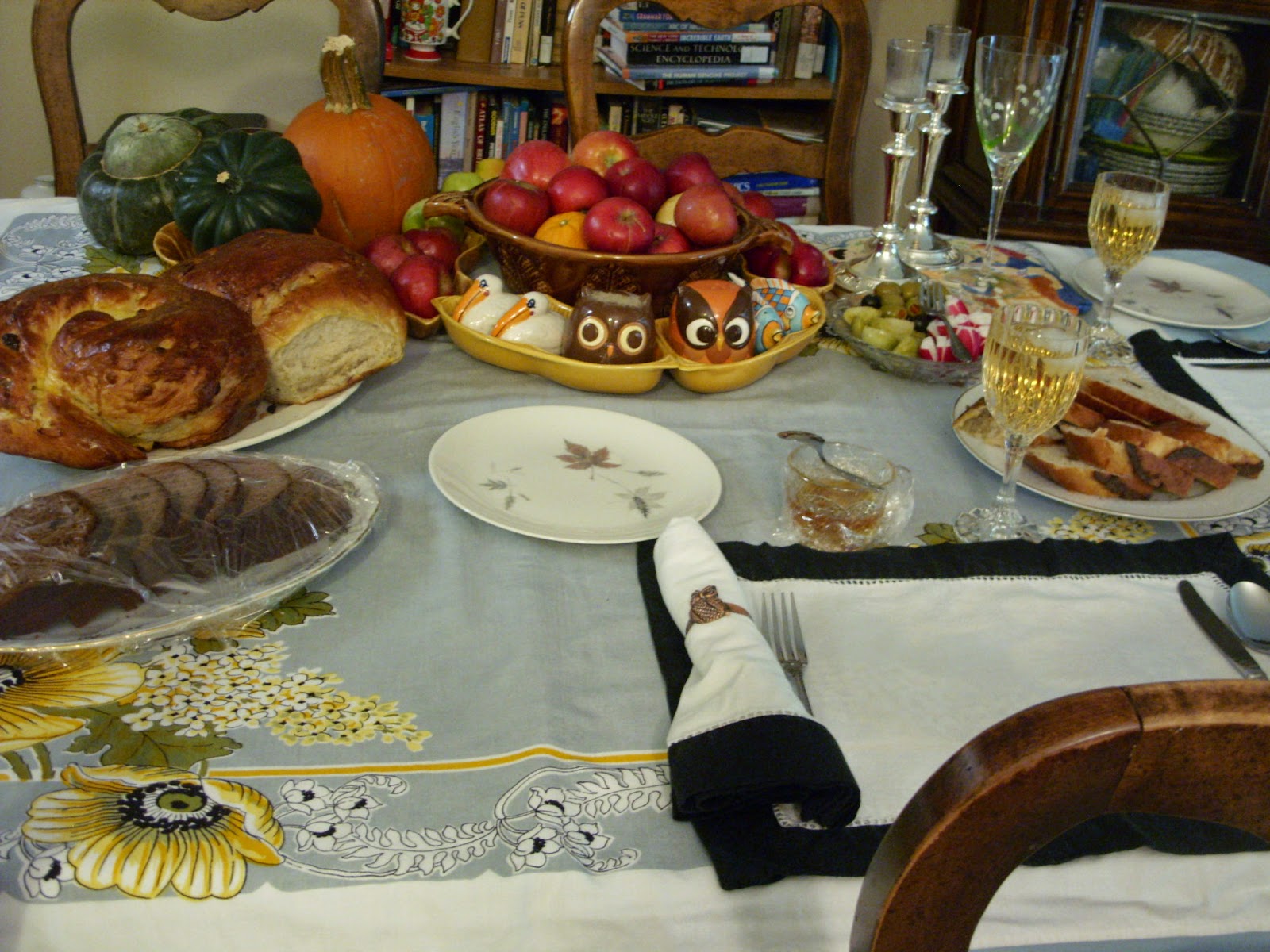 I could just stare at that tablecloth and pressed placemats for hours. I used the new iron today, and it is a joy. I told Mr. ETB I'd like to go buy five more and that should see me through the end of my life. You just know if they make something good some executive will figure out a way to save 1/100th of a cent by making it a piece of crap. Maybe I really will stock-up. If I live past 100 I won't be ironing anyway.

Oh who am I kidding, of course I'll still be ironing. I'd better buy six-just in case.
Posted by Goody at 6:00 PM
Labels: High Holidays, Jewish food

Pull Your Socks Up! said...

I have no idea where to start dishing up the food so I guess I'll have to start from one end of the table and make my way steadily to the other end. I would eat everything. Twice. Then lick my plate and pick for hours. sigh ... I'm really, really hungry. Royal Doulton for 50 cents a piece? Good grief! Happy holiday to you Goody! xoxoxoxoox

I was sitting next to my husband when I first started to read this and I had to run into the next room with my ipad so he wouldn't see your gorgeous awesome feastbecause all I managed to pull out of the kitchen this year was a measly roast chicken and I bought the challah. I know. A crime. He made some comment about how people these days don't really cook for the holidays like they used to. OMG Goody. I must get my act together. The holidays they are a coming round the bend.

Thank you, I'm flattered. To the best of my knowledge you're the first person that has hid my baking from their spouse ;)

Ain't nothin' measly 'bout a roast chicken! That's a skill I never mastered, and wish I had. Sounds so simple, but done right-man! If you managed to roast a chicken your act is much more together than you give yourself credit for. And I'll bet your house smelled wonderful.

As for "boughten" challah-the best bakery where I grew up wasn't even Jewish (I think the owners were Greek) but they baked these round towers that must have been close to a foot tall studded with raisins and saffron. People would place orders staring mid-summer, and then we'd wait in a (very) long line to pick them up a couple days before the holiday. We'd get two (the other would go in the freezer)and try to make them last. Home-baked challah may have sentimental value, but a masterpiece from a good bakery is worth every penny.

Dang that all looks fantastic. Hey! I gave a gift subscription of National Geographic magazine to a friend and they're sending me a renewal notice BUT they're offering a two-for-one price if I want to give another person a subscription for the same price. Want it? In Danny's name? maybe?

Happy New Year, Goody! It looks like you had an excellent feast.

You got a massive bargain on that Doulton.

That all looks sooo good - I love the sound of that challah. Raisins and saffron yum! Happy New Year!

That's thoughtful of you, but he already has it. Thank you anyway.