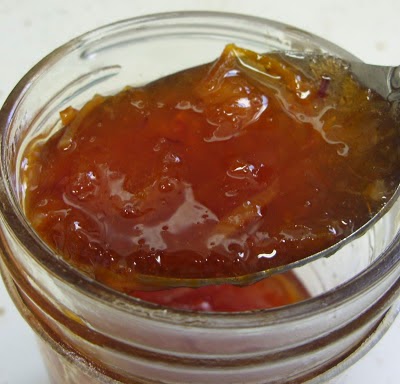 This time of year, marmalade recipes start turning up on cookery blogs, in newspapers, and on television. Aimed at the novice (yet strangely assuming the reader already knows how to preserve) the recipes and directions can still seem overwhelmingly difficult, and sometimes (unnecessarily) they are. Preparing and bottling a batch of marmalade isn't hard, (though it is work), but good, clear directions will make it go more smoothly. I get concerned by reading unsafe preserving methods being posted/printed widely not because it will cause anyone poisoning-there's so much acid and sugar in marmalade it is unlikely any toxins would be capable of growing in it, but because after all that hard work, you want something that will remain shelf-stable without concern of the seals coming undone, or mould development. Look at it this way-if you're going to sterilise jars you might as well go ahead and run them through a boiling water bath anyway-an extra 15 minutes isn't a big deal, and you can make use of the time wiping sticky jam off every surface in your kitchen. You've done all this work, why not ensure it will have a good chance of staying fresh until next year's batch?

The most recent recipe I saw was at the Guardian, and it recommended sterlising the jars, and setting them aside. The trouble with this is that the jars will be cool by the time you pack the hot jam into them. Further, the recipe did not have it go through a water bath meaning it is even less likely you will get good seals on your jars. Inverting the jars sometimes helps, but it is hit and miss. Again, at the risk of sounding like a broken record-why wouldn't you want to use a method with the best potential results? Heating jars in the oven is frankly, stupid. I've had jars burst being sterilised and I would much rather clean glass from a canner that can be dumped than be picking shards of glass from my oven floor. It also won't get them as clean as boiling. The dishwasher will work, but you'll still need to boil a canner of water, so why waste extra energy? Invest in a good jar lifter from the hardware store, and you'll have no trouble lifting jars of boiling water from the canner.

Any large pot will do for a canner if you don't wish to invest in special equipment. The water must cover the tops of the jars by two inches though, so if you are using a standard stock pot you won't be able to preserve quarts and gallons. That rarely comes up with marmalade unless Paddington Bear is staying with you. Most families can get by with pints and half pints. You don't need a rack-you can crumple up pieces of tin foil in the bottom of the pot to keep the jars off the bottom, but it does go easier with a rack that can be lifted and lowered. These are inexpensive as well, I've seen people rig things up with metal hangers but again-you will be dealing with boiling hot water and jars. Me? I'd spend the five bucks on something designed for the job.

To sterlise jars in a water bath simply wash the jars with soapy water and rinse well. Fill the jars with water, then place on the rack in a canner in the up-position. Bring to a boil and let boil 10 minutes. After that, turn the canner down to a simmer. This will keep the jars and water hot until you need them as the jam cooks. When ready, grab a jar with your lifter, empty it, and fill the hot jar with hot jam and replace in the canner. Repeat one at a time with remaining jars. Some people prefer to fill all their jars at once, which is fine but I've never had adequate work space to accommodate that. When all your jars are filled, place the lid on the canner, turn up the heat and when you reach a full rolling boil, start timing. That's it. I find this much easier than fiddling with the dishwasher, or worrying if something will explode in my oven. Sometimes a jar will shatter in the canner, but it is less likely if you have heated them in boiling water, and filled them with hot jam. It does happen, but in all my years of canning I've only encountered it twice, both times with older jars. Be sure to carefully inspect jars for fine cracks before starting. Spoons clanking around in jars over time weaken them, so after a few uses it is best to invest in new ones saving your old jars for storage of beans, rice, etc.

I find that getting my work space sorted before starting is also useful. I run through a check-list of what I will need to complete the job, and get them arranged. Extra spoons for skimming are on the right, and so on. It sounds obsessive, but experience has taught me that time is important when shoving food into jars, and the less you waste fumbling about looking for your tools, the better. My typical work space looks like this:
At the far end, a heat proof mat for placing the pot of jam (so much easier than filling jars at the stove and moving back and forth with them). Along the top edge-clean screw bands for sealing. To the left, a jar lifter and tongs. A jam funnel, damp rag for wiping threads, and several mini-heat proof spatulas for removing air bubbles. A ladle next to the jam funnel, several extra spoons for skimming or removing jam if you over-fill, and extra towels.

Some final words on marmalade before the recipes:
I don't bother with a jelly bag tied with the rinds inside and cooked along with the pulp as it is messy and a pain in the behind. It does however make beautiful, crystal clear marmalade with lovely orange skin suspended inside. You need to decide what method works best for you, with this caution-once you add sugar the rinds won't get too much softer. The recipe I saw this morning had you add the sugar at the start which I think would make the marmalade a bit on the hard and chewy side. Some people like this-my dad always bought some imported from Australia marmalade that was like chewing a piece of beef jerky. Thick, hard slices of orange and lemon are not my idea of something to spread on toast, but if you prefer a bit of a challenge first thing in the morning, then go ahead and add the sugar early. If not, you'll need to keep testing the rinds as they boil until you are happy with the texture. I do my marmalade in two-day steps the first being a boiling of the rinds with an overnight sit in the pot. This does help with the softening, and reduces the time spent in the kitchen next day-it also makes bottling marmalade seem less of an overwhelming chore.

To cut strips of rind, I encourage you to invest in a good pair of kitchen shears. I've used a knife, but the shears make light work of it. Use a vegetable peeler to remove the rinds ensuring you get as little pith as possible.

If you make lime marmalade, a few drops of food colouring will keep it from looking grey, but go easy-too much will turn it a strange emerald colour that would put anyone off their breakfast.

Finally, sugar. There are special pectins made for preserving low-sugar recipes, and they work well, What I would NOT do is reduce the sugar in a tested recipe as it may not set correctly. People are often shocked at just how much sugar goes into marmalade, but you're dealing with bitter rind, and also need something sturdy enough to suspend the rind in. If you cut back the sugar, you may end up with a sort of runny marmalade soup, which is fine for spooning into porridge, but a bit messy for toast. You can also end up over-cooking the batch as it will take longer to reach the gelling point, and when you go to open a jar months later find a jam the texture of slightly dried out golden syrup. I've bent spoons trying to pry that sort of thing from a jar. But if sugar is a concern, do look at some of the low sugar pectins, or use a recipe designed for sugar substitutes. You'll have better results than simply reducing the sugar in any given recipe. Bear in mind too, that sugar helps to preserve the jam. 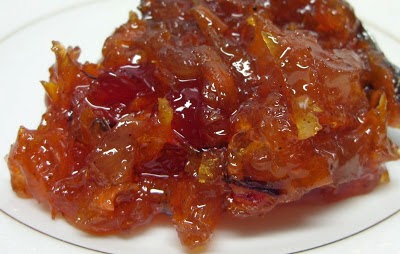 These are some favourites I've made over the years.
Popular additions to the recipes-splash of orange blossom water, whisky, vanilla extract, bitters, and even gin. Any additions should be added at the end, off the heat and be aware the jam may sputter when you add alcohol.

http://eattheblog.blogspot.com/2011/12/orange-jam.html
A little different, but good if you like hunks of fruit in your marmalade.

http://eattheblog.blogspot.com/2010/03/carrot-marmalade.html
Really more of a conserve

http://eattheblog.blogspot.com/2008/12/three-citrus-marmalade.html
With grapefruit, lemons and oranges.

http://eattheblog.blogspot.com/2012/01/pineapple-marmalade.html
Something a bit more tropical.

http://eattheblog.blogspot.com/2008/07/lime-marmalade.html
Add a splash of quinine water and gin for g&t marmalade. 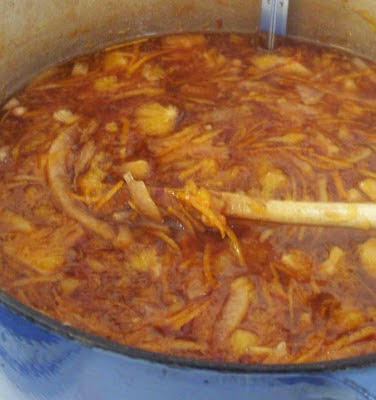 Posted by Goody at 8:11 AM
Labels: Canning, Marmalade and Jams, Orange, Preserving

Real orange marmalade on lavishly buttered English muffin toast is a feast for the goddesses! Oh, and with a pot of Darjeeling tea, of course.

I'm not sure I'll get to marmalade this year, unless Danny makes it (he's already plotting his fair entries). If you ever do get interested it isn't difficult as much as time consuming. It is my least favourite thing to make dealing with all those tiny slivers of peel.

@Beth Waltz
A good pumpernickel is heavenly. I make an OK one, but nothing even close to the loaves I grew up on in Chicago. I have heard (likely folklore) that the bakery used the stale, unsold bread to feed the next batch of starter giving the overall bread even more of a lineage.

My husband makes the marmalade in our house. I'm pretty sure he uses the oven method for sterilising jars, and the marmalade will easily last for a year.

I love marmalade and bacon standwiches, made with toasted read. Sounds odd, but it really works.

The G&T recipe sounds fantastic. I don't own the equipment to do much canning myself, but I have an awesome and crafty friend who has the bath, the lifting tongs, the whole works. I might have to see if I can talk her into a little project soon...
Cheers,
Jessica

Hardware stores are the best place to buy the stuff if you decide to do it yourself. The Ball Blue Book is an excellent beginner's guide too.