How About Them Apples? 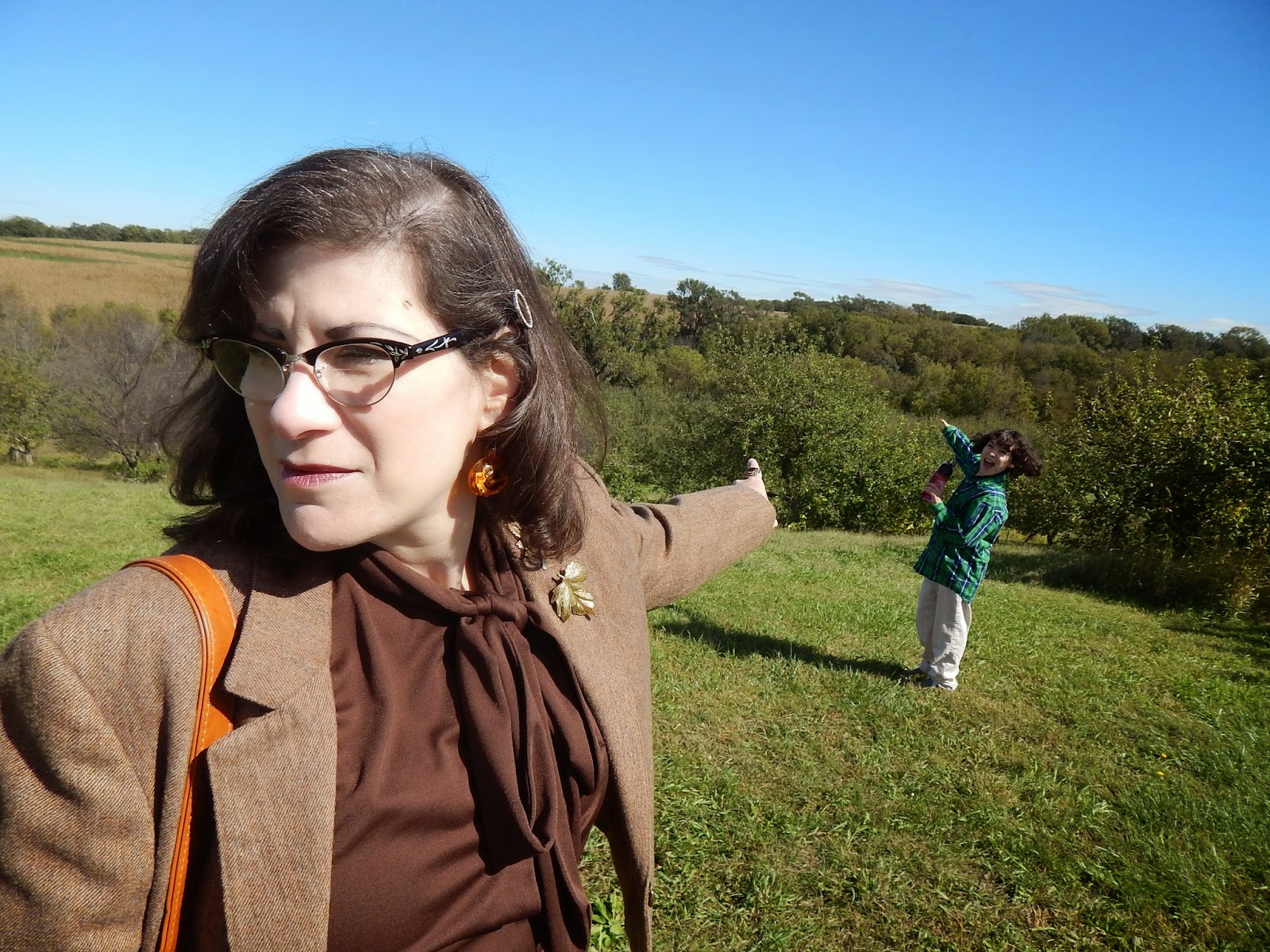 There weren't any. At all. We hiked the rolling hills of the orchard, and came home empty handed. Early in the season the hail and tornadoes damaged the area orchards. This one was able to salvage a bit for cider making, but there wasn't a single apple on the trees worth picking. You could see the damage to the blossom end of the apples, and they just never grew properly after. Still, it was a lovely day for a hike, apples or not. 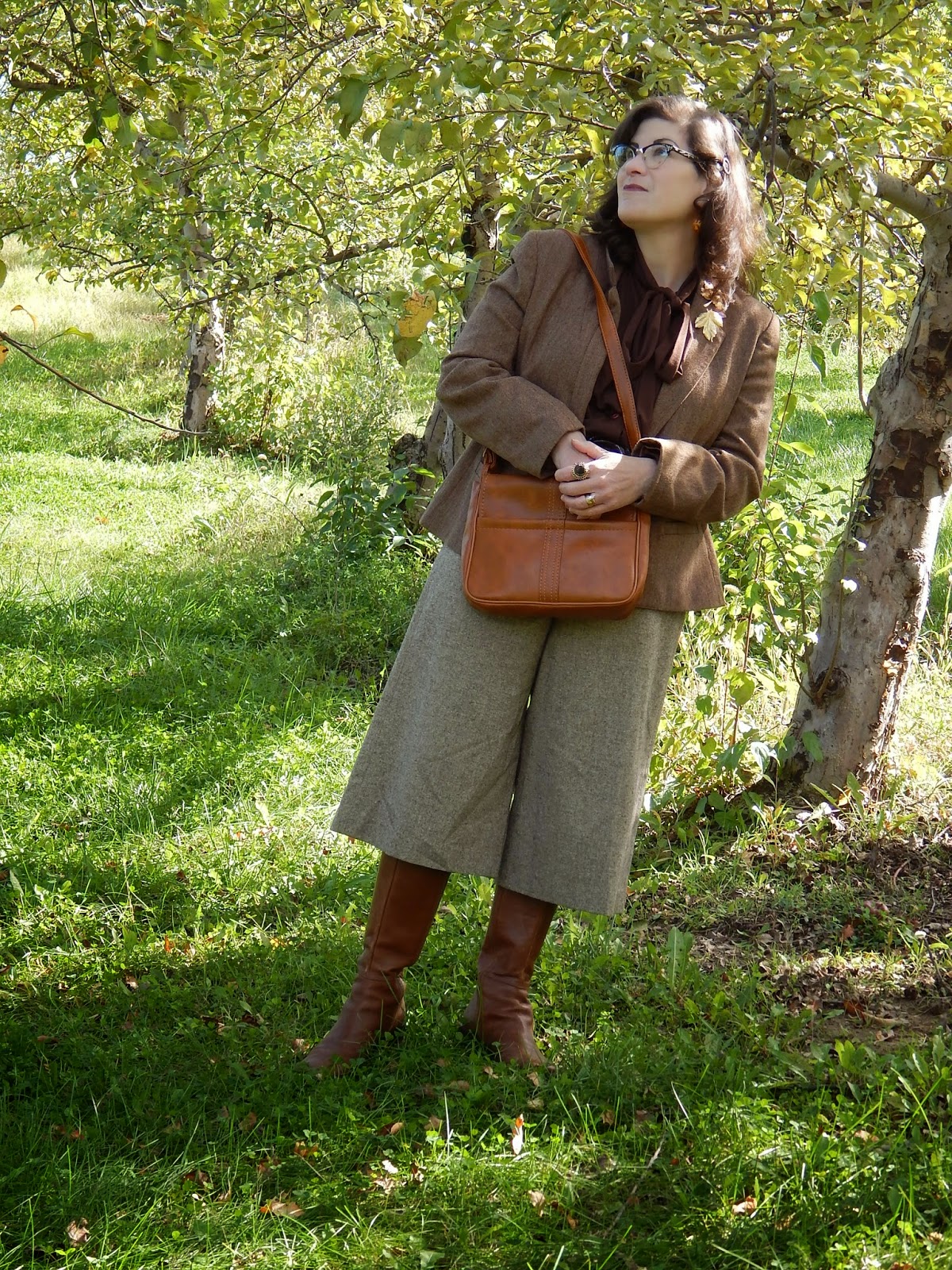 I wore apple picking clothes. The ground is wet, and the grasses tall in spots-perfect for a pair of tall boots and culottes. I knew there was a reason I was keeping both items...and it wasn't because they are stylish. 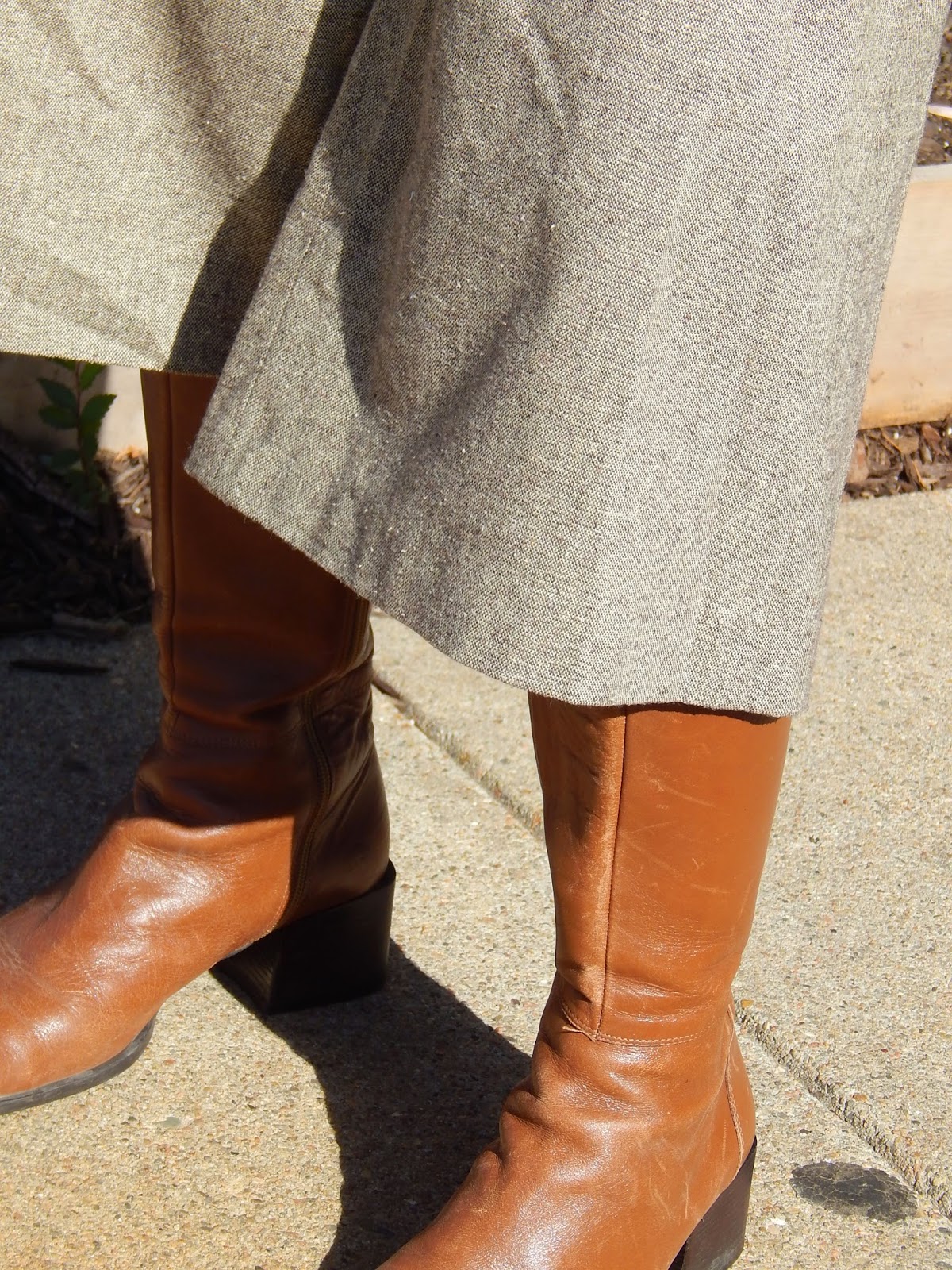 Wet feet=misery. I'm not willing to endure that if it can be helped. 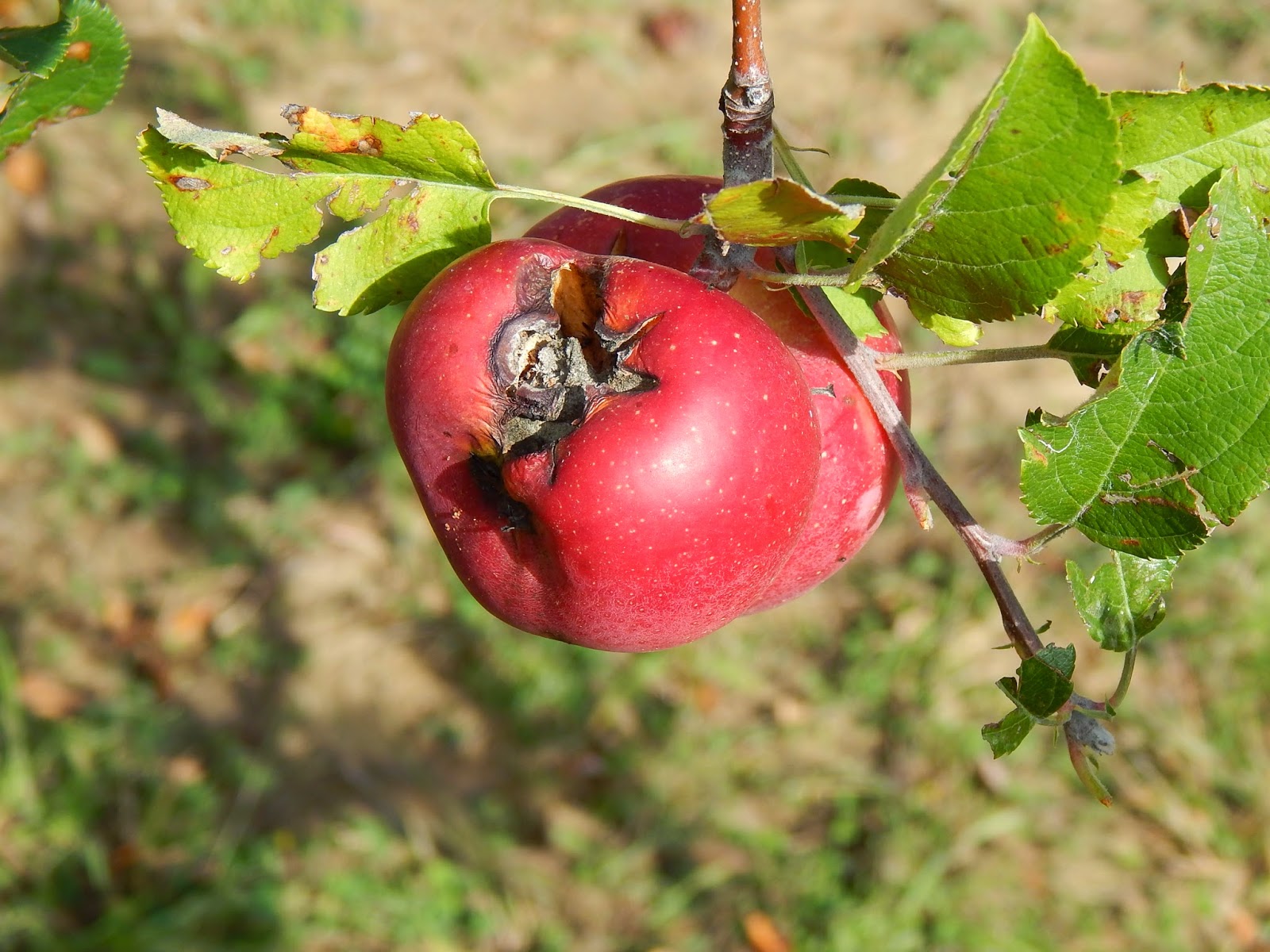 Thank, Mother Nature. At least the wildlife is happy. 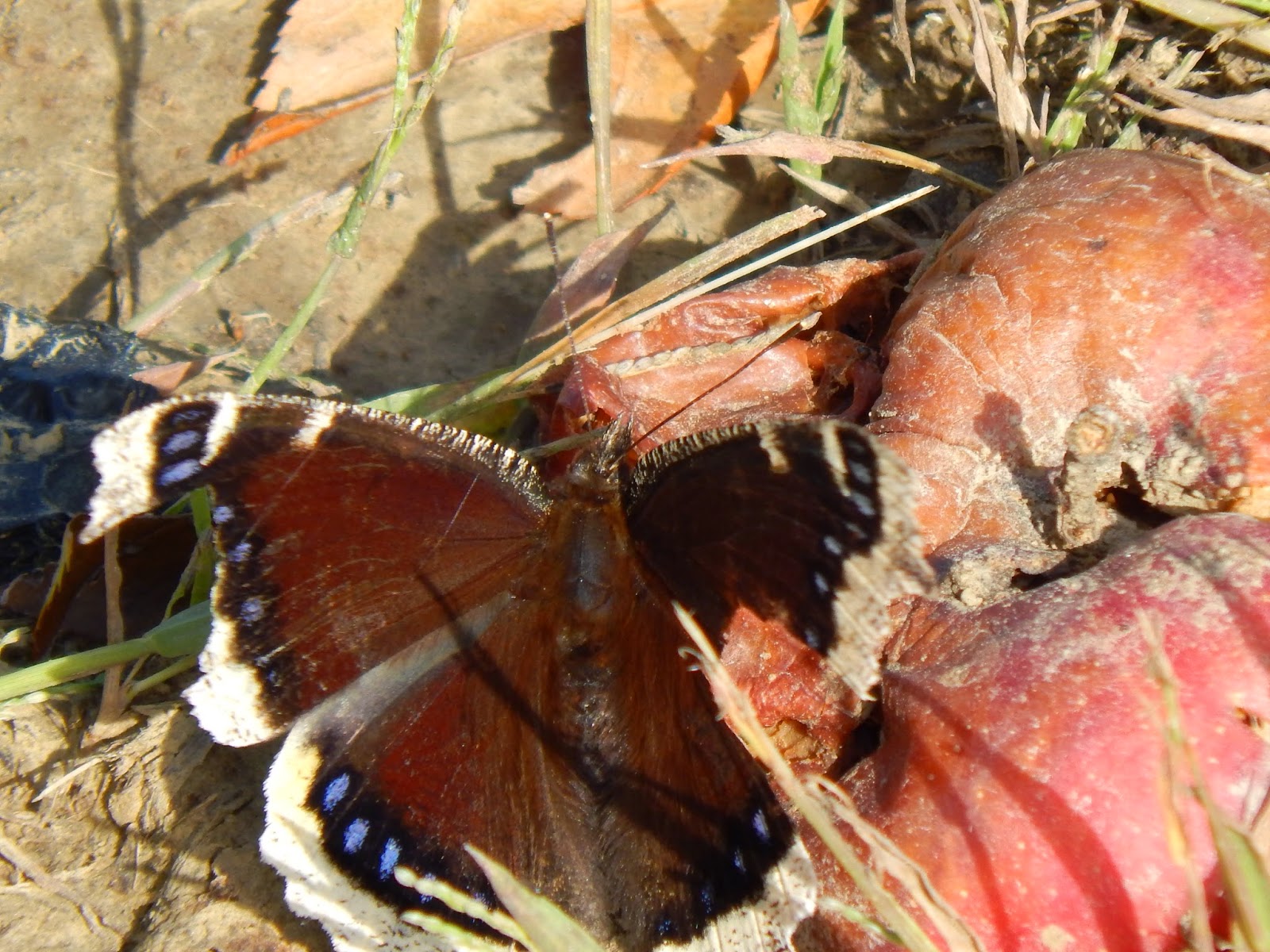 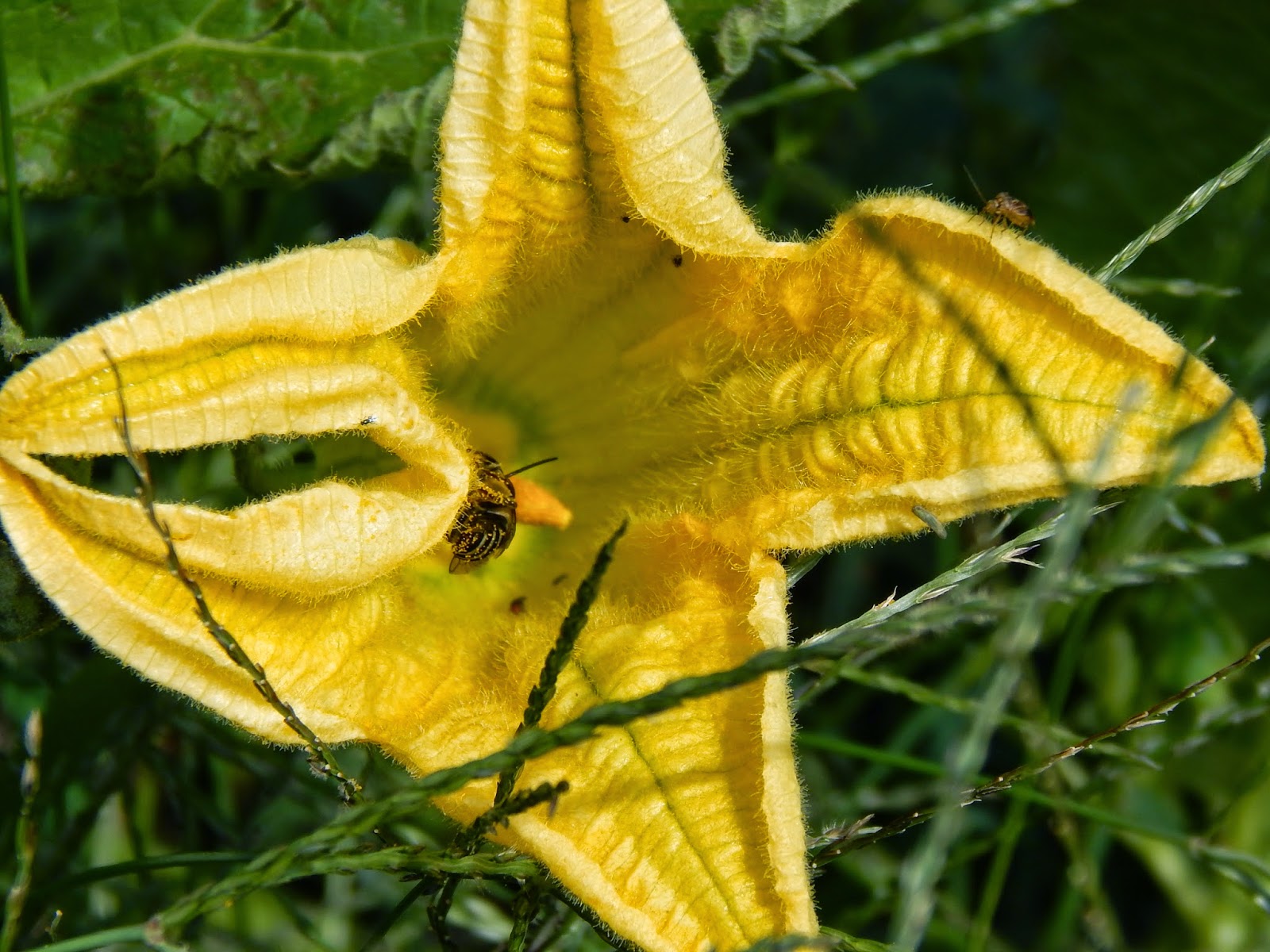 The squash and pumpkin patch seemed to be doing much better. 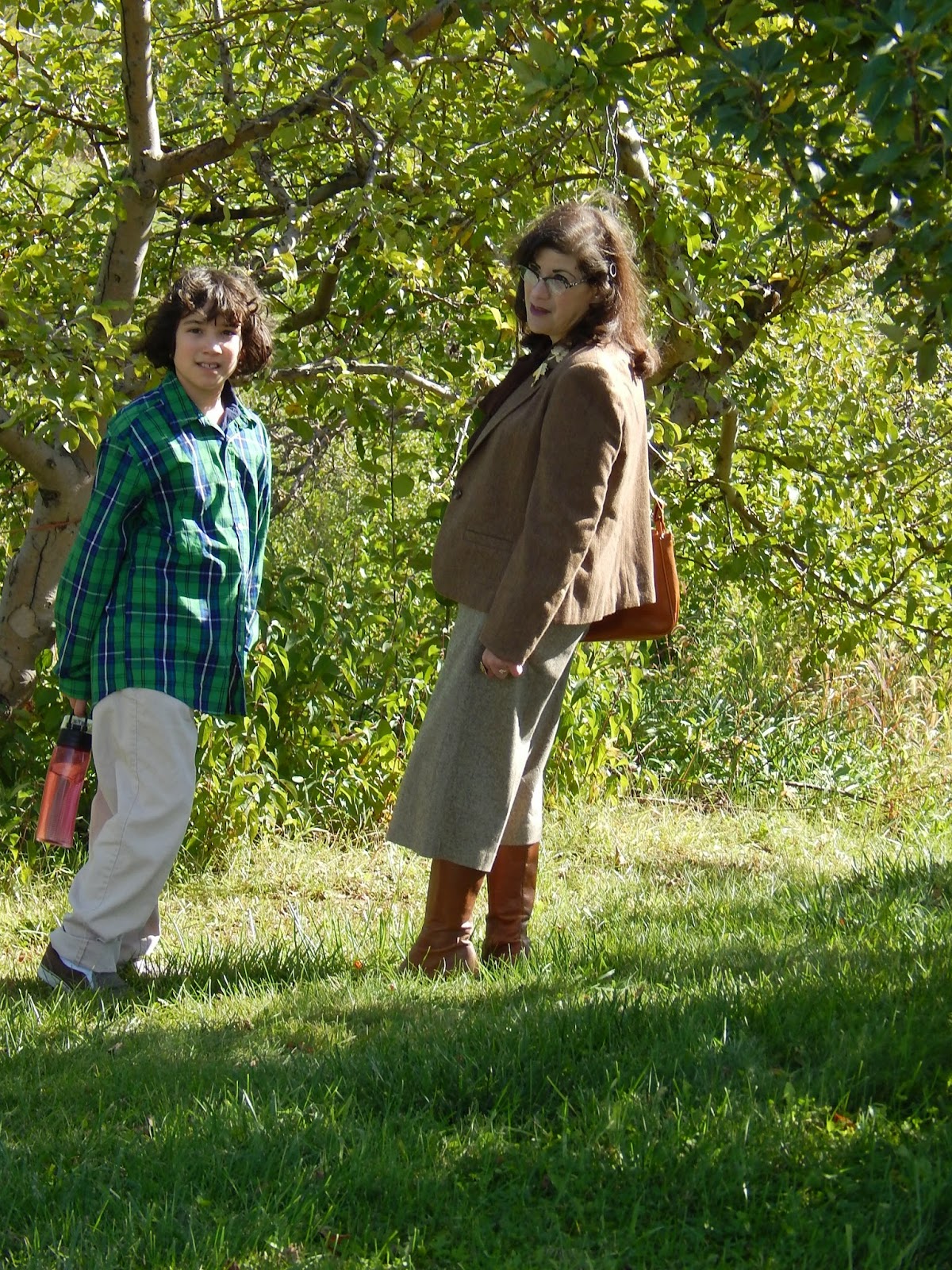 We wore long sleeves to protect from mosquitoes. It didn't help-my face is covered instead. I reached up to shoo one away from my cheek and my hand was covered in blood. I must have swiped it mid-snack. All that rain really brought out a swarm of the suckers.

We waved to a group of families on the hay rack ride as they passed by. I mean, yeah the apples were nonexistent, but you're at a farm, try to make the best of it, right? No, apparently it would have killed them to smile and wave back. Not a single wave. I understand disappointment, but for fuck's sake, life's full of them-and you're on a hay ride. People. 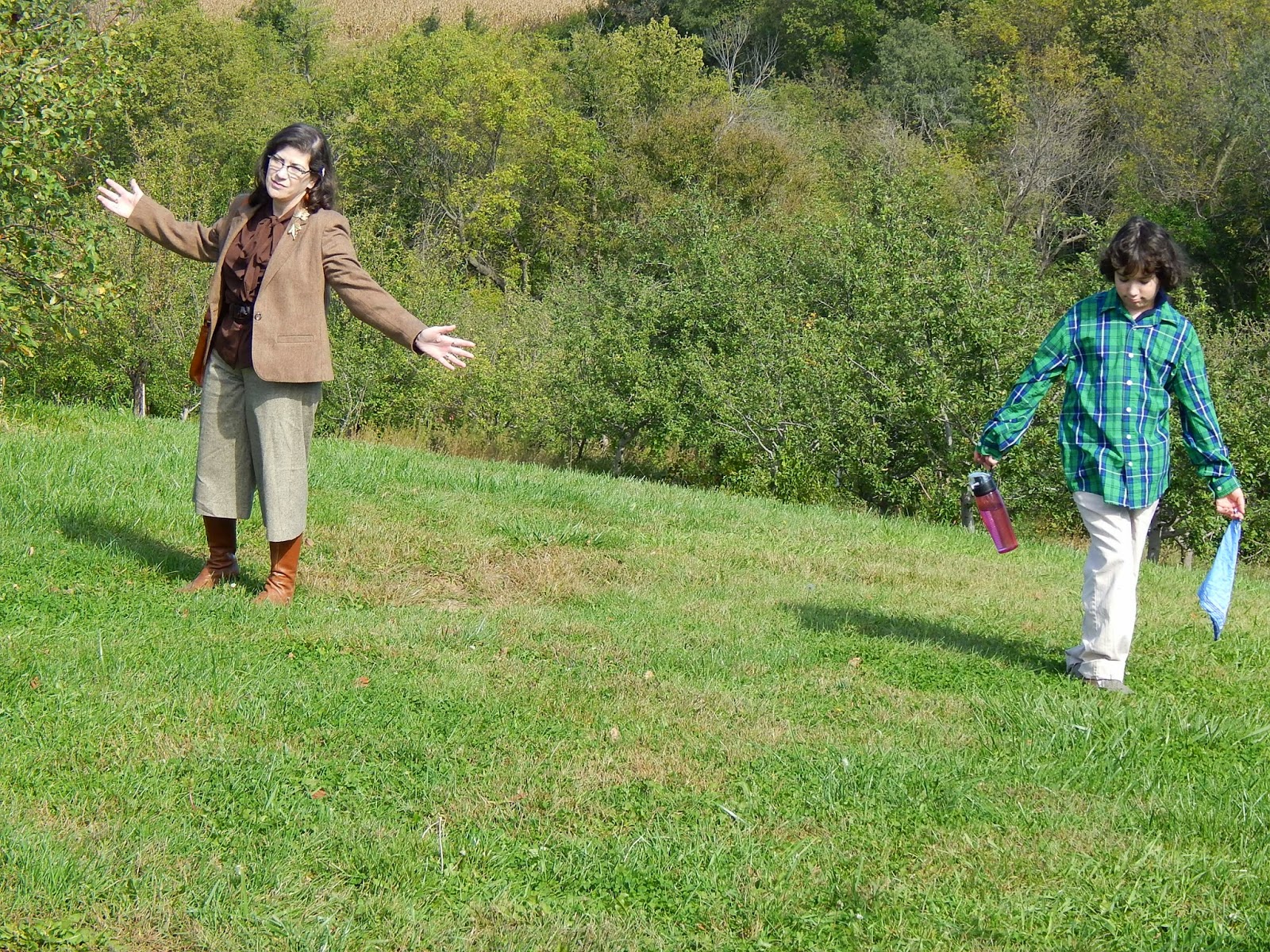 "The hills are alive, with the sound of music..."
Note, the child is attempting to walk away from me like I'm some strange woman he's never seen before. Just wait until he starts bringing dates home. He's embarrassed now?

On the way home, I stopped at the Goodwill in Council Bluffs and snagged a pair of 1970's Yodelers (furry boots). I have no idea if they will fit or not, but I grabbed them anyway. They'll fit someone. They were in great condition for winter boots. 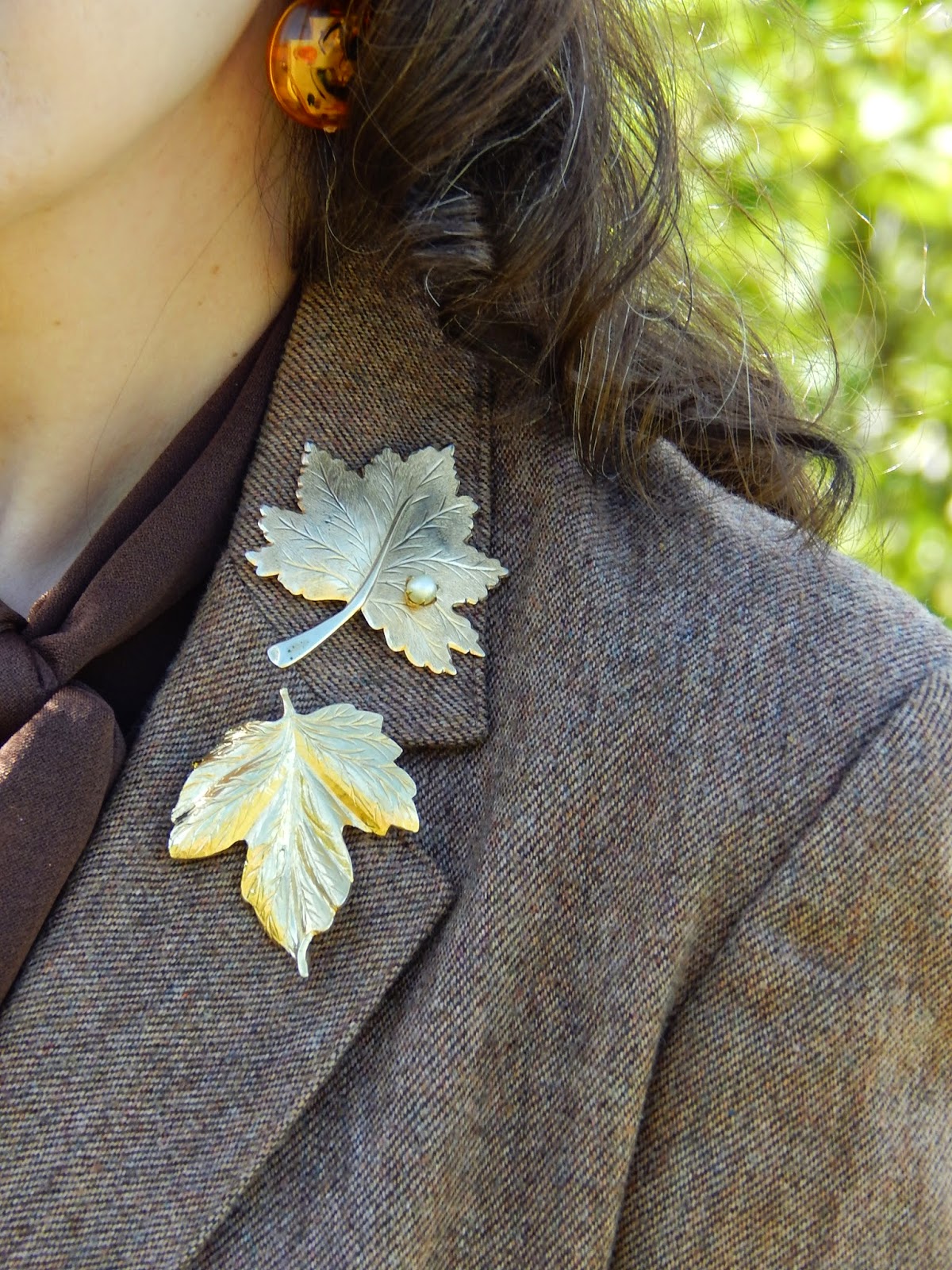 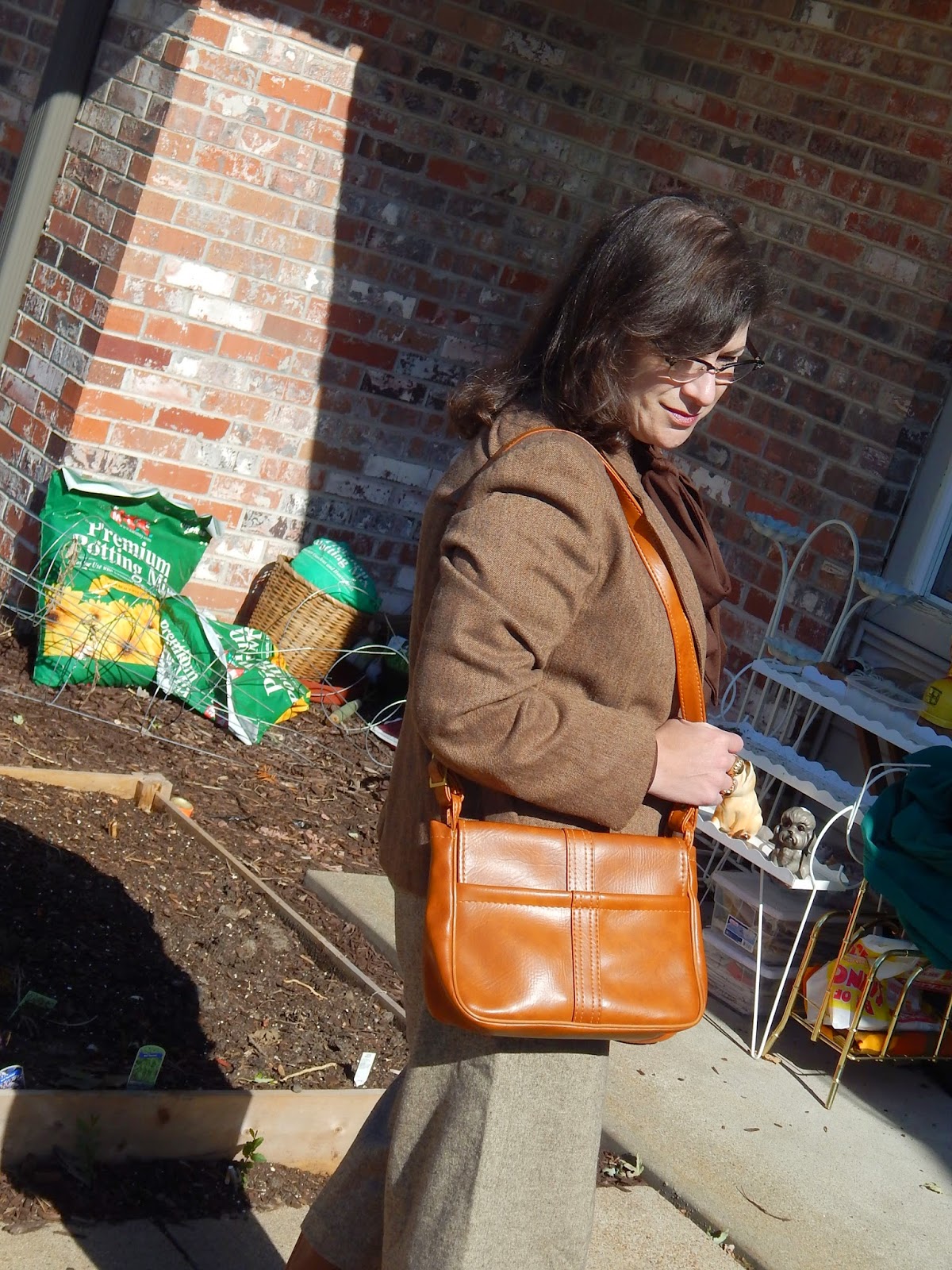 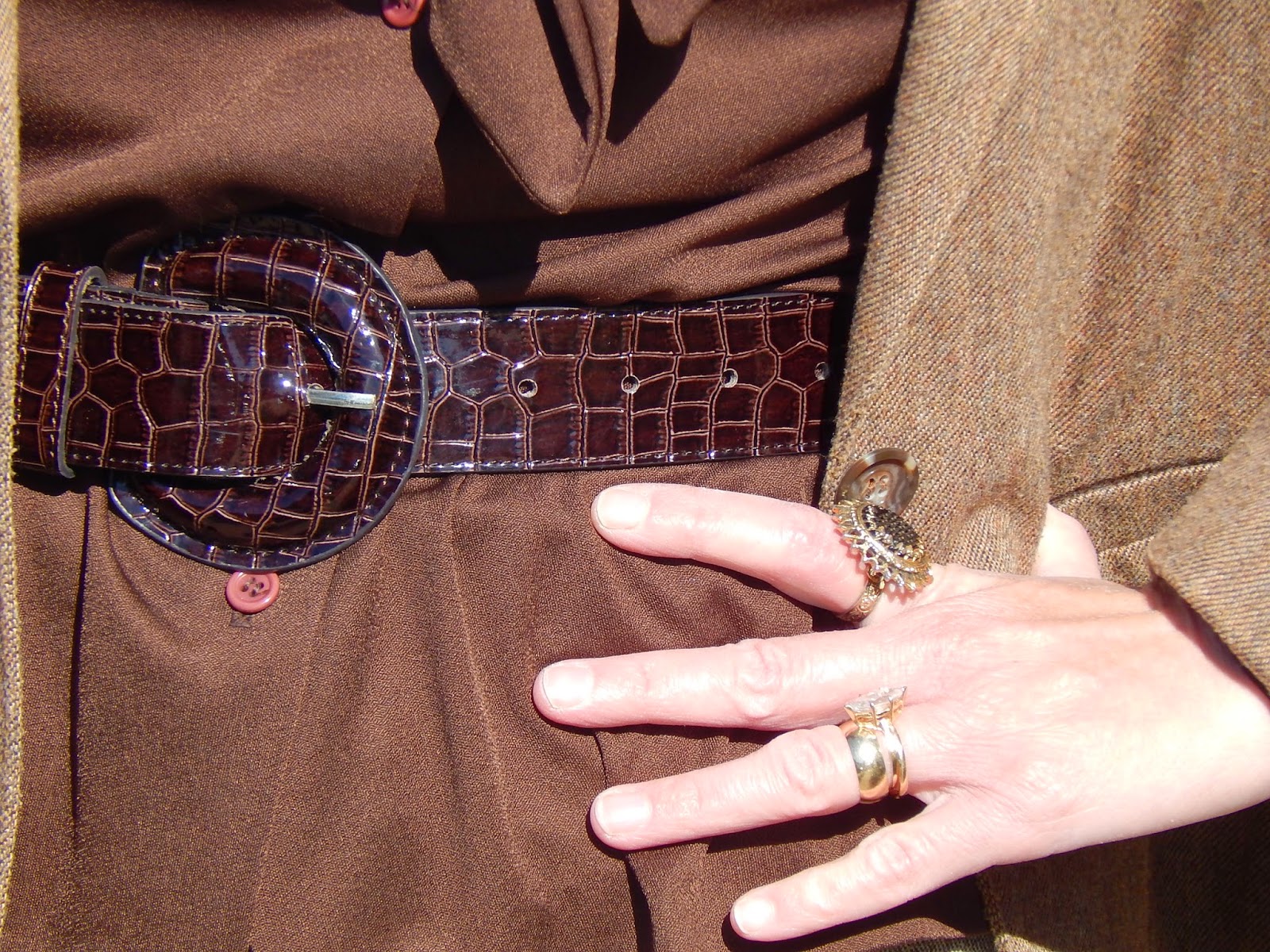 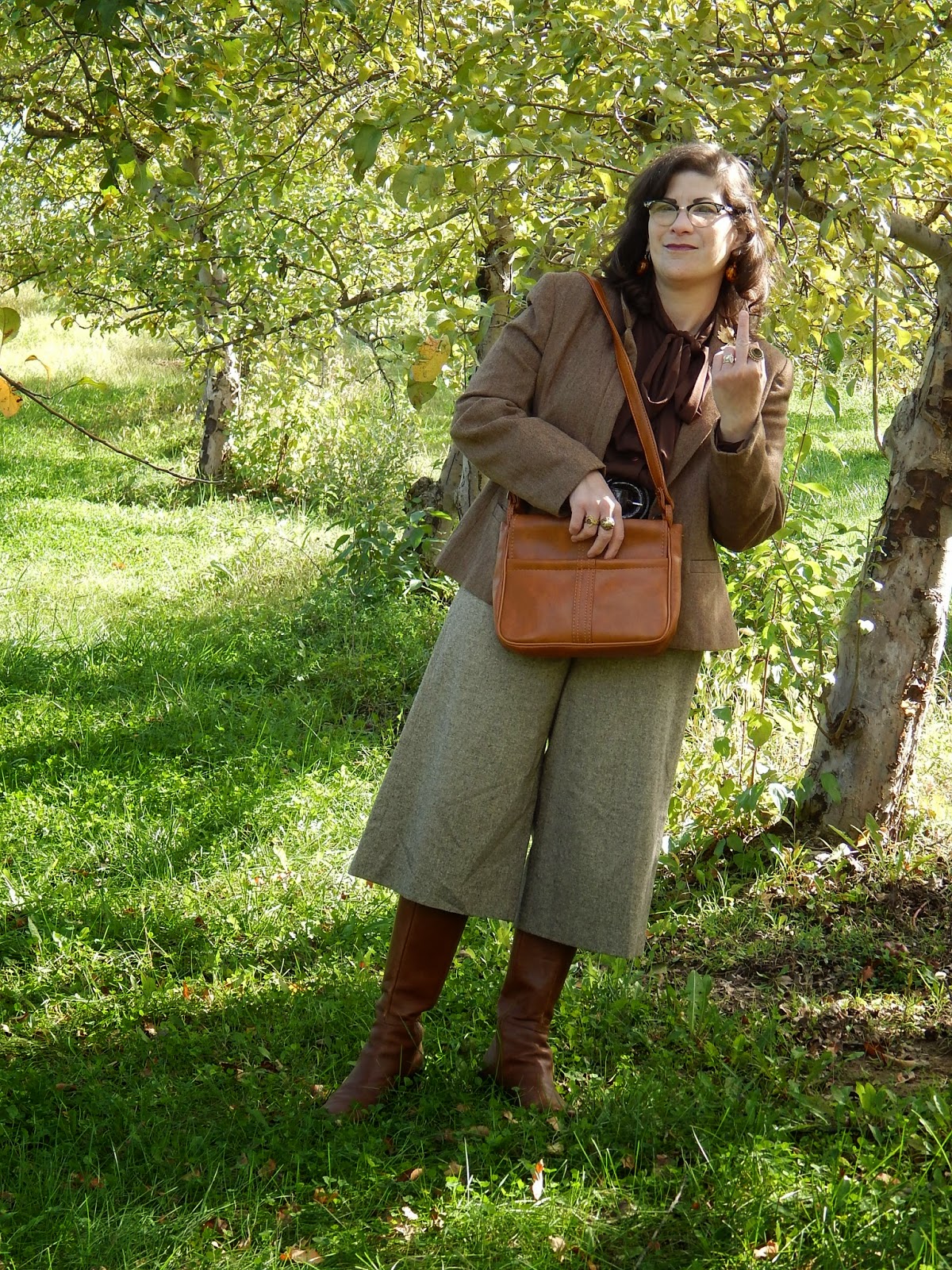 No apples? Thanks a lot tornado.

Our power is going to be off for several hours tomorrow whilst the power company does some work. They can't be specific about time. If you're waiting for me to reply to email or that sort of thing, I'll apologise in advance. I'm going to see it as an opportunity to take Danny to the botanical gardens, and possibly the art museum and a few downtown galleries. Should be fun.

Have a great week.

I knew you would be singing the hills are alive when your arms were out stretched like that. Bad luck with the fun sponge folk on the hay ride, a smile costs nothing, at least you keep handing them out with your free waves. As for embarrassing Danny, it is your right as his mother. My lads have often been on the receiving end of some from me and I shall continue till I die. Oh then I am coming back to haunt and taunt them both!! Love your outfit!

Catching up, catching up...
I beg to differ, I think the culottes/boots combination is very stylish. Very Country Lady, in fact. I laughed at the Guardian's piece on Frump Chic too (you mentioned it in a previous post) - longer length skirts? Higher necklines? Coats? Scarves? Are these things really frumpy? I don't think so!
I like that you are welcoming autumn by working through the brown section of your wardrobe, but come on, where's the orange?! Yes, those miserable sods on the hay ride need to perk themselves up a bit, and no, Danny's not seen anything yet when it comes to embarrassing parents. So many joys to come, right?! xxx

@Sue
I do a pretty mean Julie Andrews impersonation. My Mary Poppins is even better!

@Bernice
That sounds scary. I can't imagine hearing a tile roof cracking above me *shudder*.

@Curtis
I can wear rust, but not bright orange. It has too many negative connotations here. I keep thinking I should keep a file of index cards with ides for horrifying my child when he's older. You know, so I don't forget anything when the time comes. I imagine divided sections for, Girlfriends/Classmates/Sporting Events/Public Transport/Graduation/Parties/etc.
Might make a good prank-imagine the look of horror when he found it!