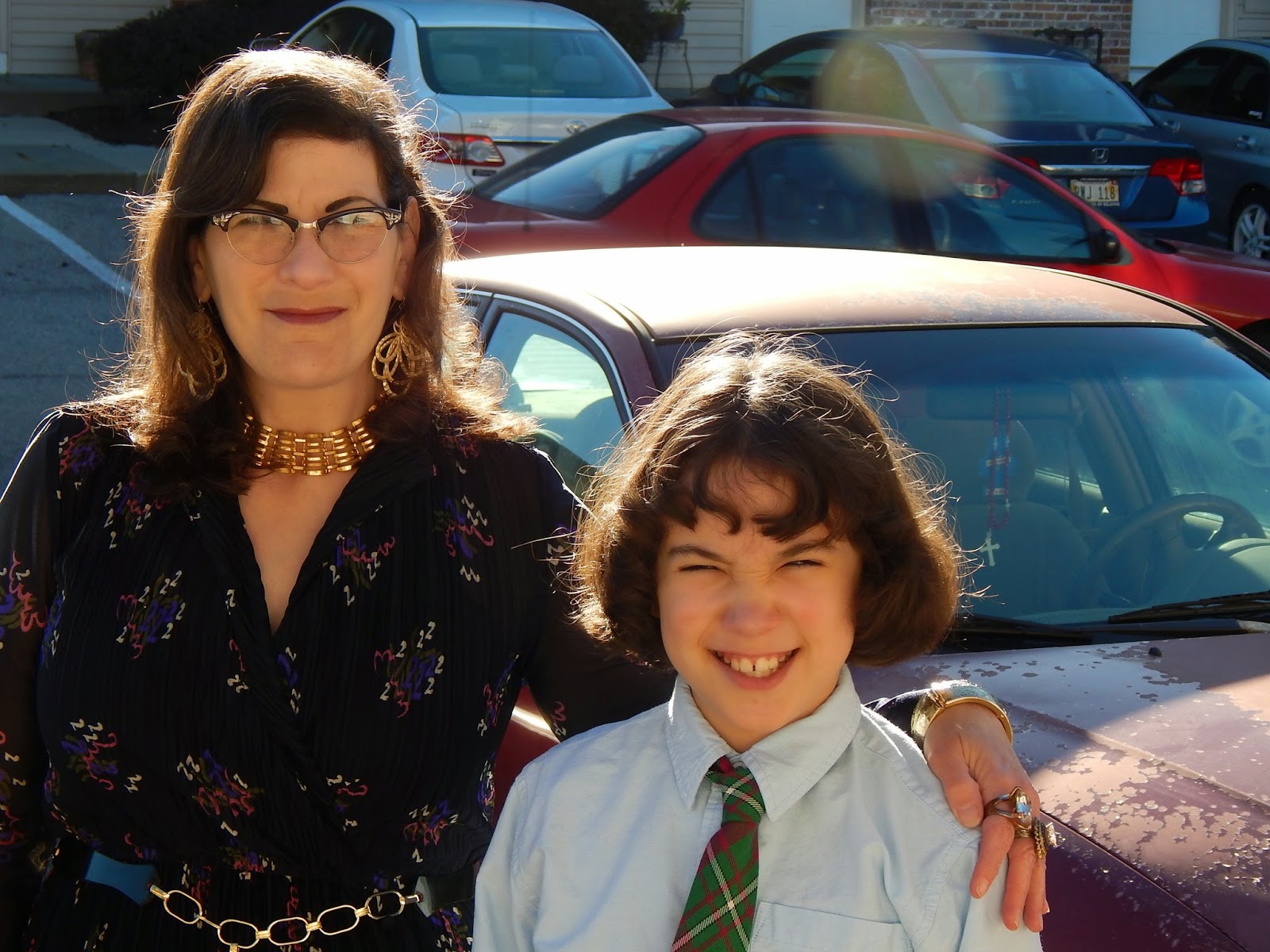 We went to Film Streams last evening to watch the Met's simulcast of Macbeth.
http://www.metopera.org/opera/macbeth-verdi-tickets
The story has timeless appeal, after all, who wants to be number two?

Last season we saw Tosca, and I have a feeling we will be spending a good chunk of the 2014-15 season at Film Streams.  This isn't an cheap evening on the town (would be worse without the Film Streams membership) but if I have a child that will sit happily through three and a half goddamned hours of opera-and enjoy it, I feel I ought to take him. I grew up listening to the Met broadcasts on the radio each Saturday during the season http://www.metopera.org/metopera/broadcast/operainfo.aspx?src=wlnug, and I didn't enjoy it. At all. My dad liked to listen to opera in the car, so we'd all go for a drive to Wisconsin. By the time we were back home the opera would be over, I'd be carsick, and I'd swear that once I moved away I was never going to listen to another opera again. Ever. Funny how life works out. My grandfather, and my dad were both opera fanatics, so I suppose it skipped a generation (or only applies to the males) and Danny has the opera gene.

My personal issues with opera aside, this was an extraordinary performance. I had to laugh at the wardrobe for the witches-shabby vintage with glowing handbags and silly hats. Probably not the intended audience reaction, but I was sitting there thinking, "Ooooh, that witch has a lovely cardigan...and look at her shoes!"  Fair is foul and foul is..a great pair of cat-eye glasses. So yeah, those scenes were lost on me as I was checking out the costumes. The set design was thoughtful as well with the ever-present wood in the distance.

I'm not qualified to review the singing, so I won't. I know, everyone with a blog is supposed to post an opinion about everything. *Shrug*. After three and a half hours of sitting there you could raise Caruso from the dead and I'd still find fault with it. Danny however, was enthralled. OK maybe not in the last part of the third act, but that's where Macbeth loses it on the stage as well. It gets a bit long, but then he snapped back for the final act. It would be a late night for anyone, let alone a nine year old. He was the only person I spotted in the place under forty. I might have nodded off here and there, but don't tell anyone.

Being a night out on the town, we decided to dress for it. Danny was tempted to wear a kilt, but instead went with his tartan tie. I stayed away from plaid altogether, though I did consider a pair of red gloves but as it was Macbeth, not Rocky Horror I didn't think I needed props.  In the end, I wore a new (to me) dress I'd been excited to wear. The dress is transparent, which might have been ok in the 70's but definitely wouldn't fly today (I was pushing it with the very low neckline) so I wore a full slip. I needn't have worried-there was so much boobage hanging out all over the screen (in HD!) that no one would have been looking at mine. Lady Macbeth was stacked. Geez, maybe that's why Danny's eyes were bugging out of his head like a cartoon character. Hubba-Hubba, indeed! Nah, it was probably the singing...and all the blood. 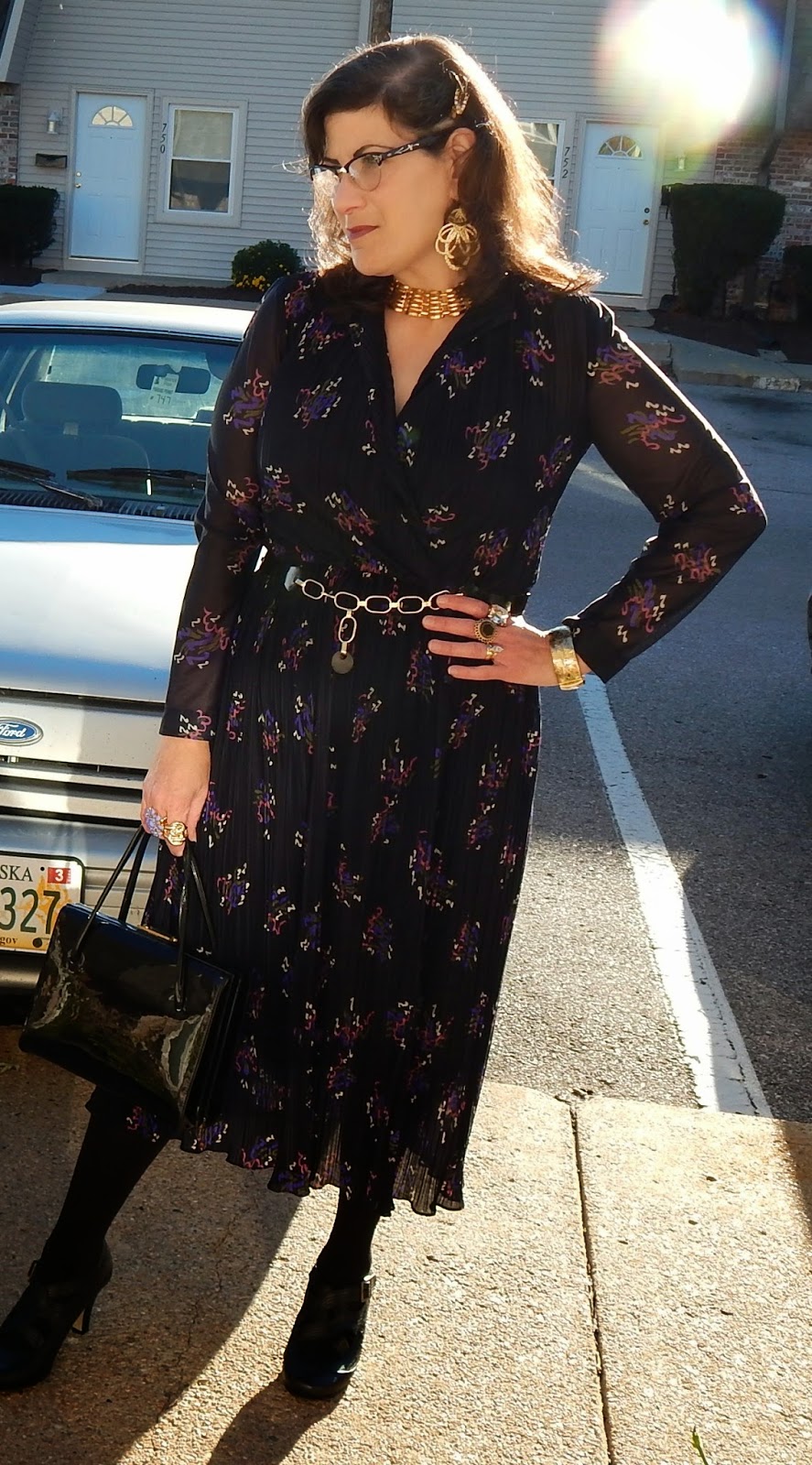 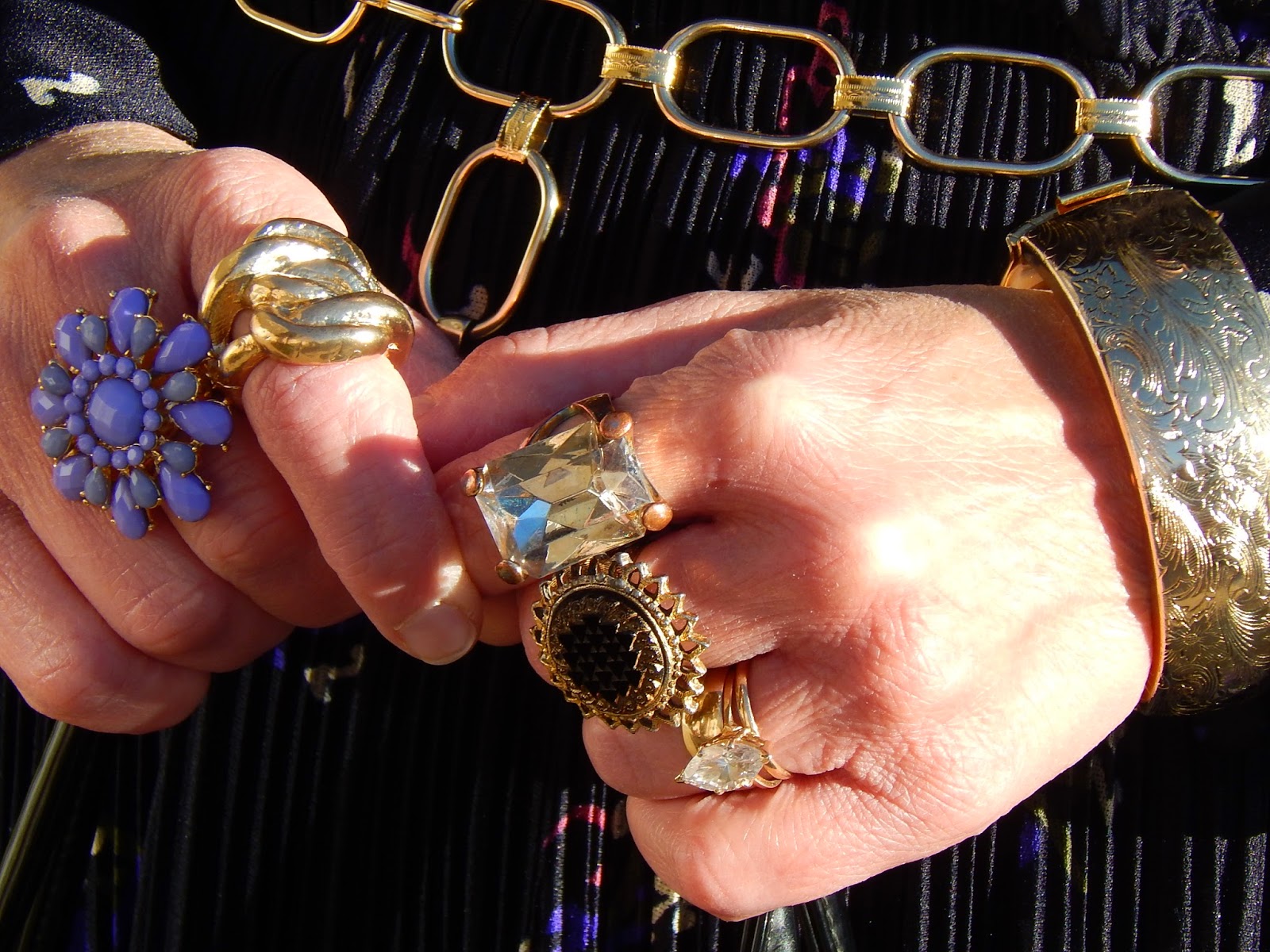 I wore a few rings, nothing too flashy. Gawd, I love rings. Sure, I have fingers that look like sausages, and I haven't bothered with a manicure in ages, but no one notices that when you have great rings. Great big rings. 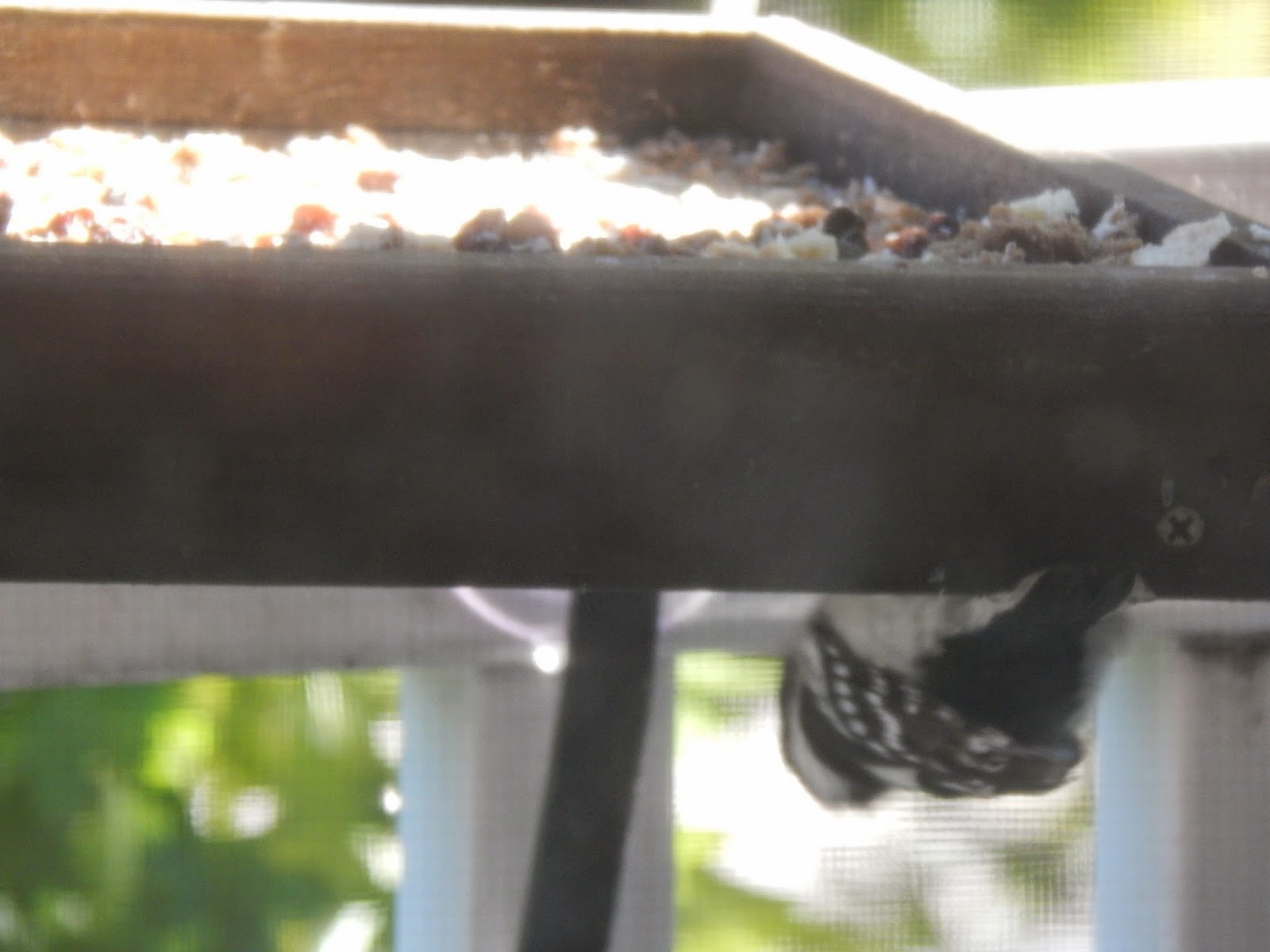 And in other news...woodpecker fail. Hey Woody, you're doing it wrong. 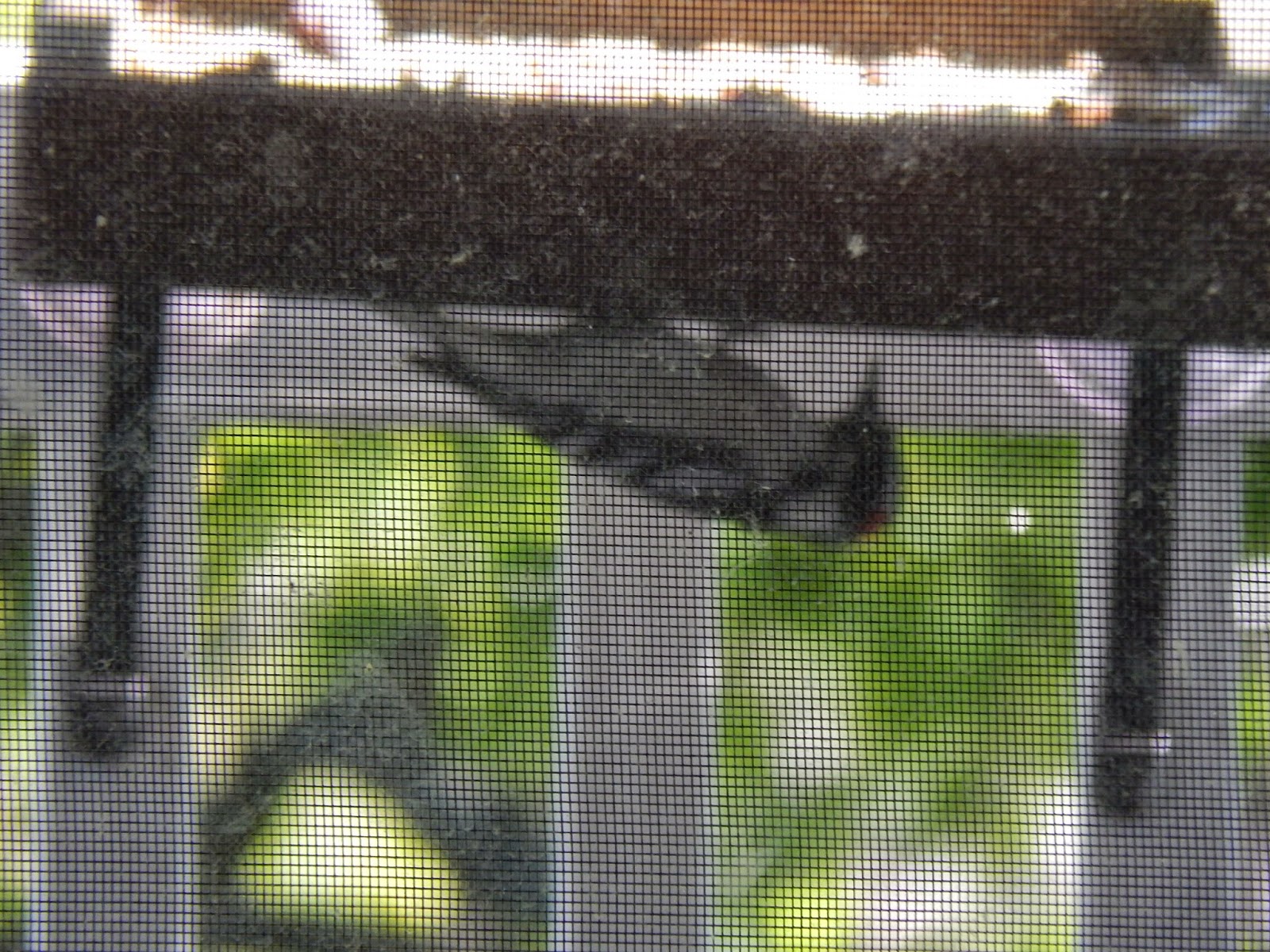 The food is on top. Why is nature such a dumbass? Huh? Huh? You think you're so smart woodpecker? * 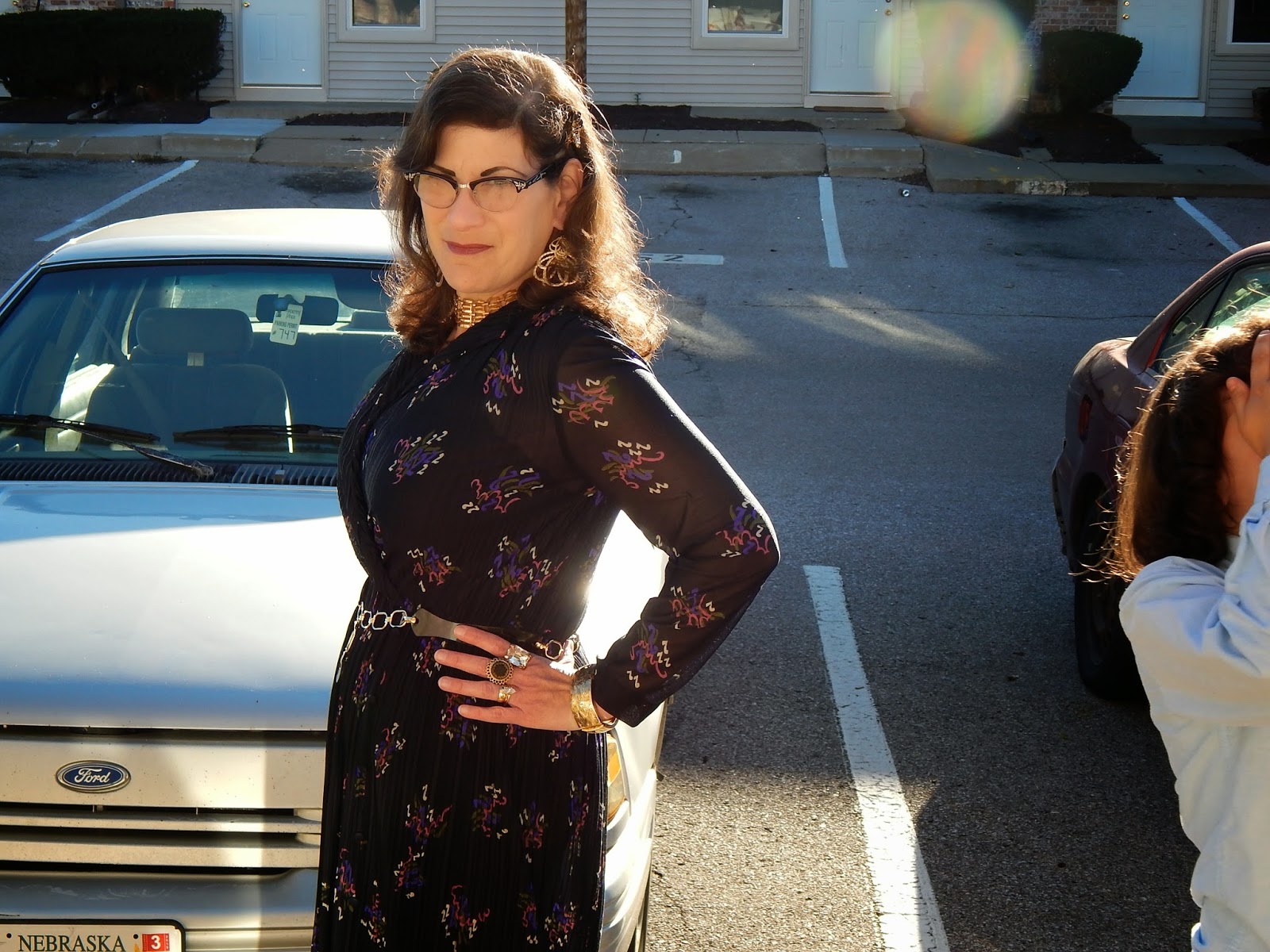 *Yes, I am aware he was hanging by his feet pecking at the mesh tray from beneath. Geez people, do you really think I stand at the feeder screaming, "Dumbass!" at birds? Well OK most days I don't.
Posted by Goody at 3:40 PM
Labels: 1970's fashion, dresses, Macbeth, opera, vintage, Vintage Clothing

Your kid is seriously cool. I bet he hums the "Witches' Chorus" for days. (I admit it -- I have done time as an opera chorister, so I'm glad to hear about youngsters liking the stuff.) You can always tell a Verdi opera, because thete's always a moment when someone yells, "Pieta!"

How awesome that your son enjoys a good opera and really gets into it. It shows his artistic spirit! It's so nice when you don't have to "push" your child to go to an event like this. Wonderful!

@Propagatrix
Does that make you a chorus girl?
I'll bet you have good stories from that time-you should post them!

@Joanna
I've had to twist his arm for visual arts-a trip to a gallery is like I'm beating him or something, but generally he's pretty open-minded.

@Curtise
Danny also likes the accordion and has dreams of leading, "Big Dan's Polka Band" so I'd say his tastes are all over the place.

Wagner is..."showy?" Maybe that's the word. You know you're in for an experience of sorts...typically a long one ;) I can't listen to Wagner without hearing, "Kill the wabbit, kill the wabbit." I'm afraid cartoons ruined it for me.

The Met Opera has cancelled their planned worldwide broadcast to movie theaters of 'The Death of Klinghoffer' on fears that it could fan global anti-Semitism. They've nixed it from the radio broadcasts, too.

I wasn't aware the hijacking had been made into an opera.

That must cost a fortune for the Met to just cancel a production.

They're still producing it at the Met, they only cancelled the HD and radio broadcasts. Still..