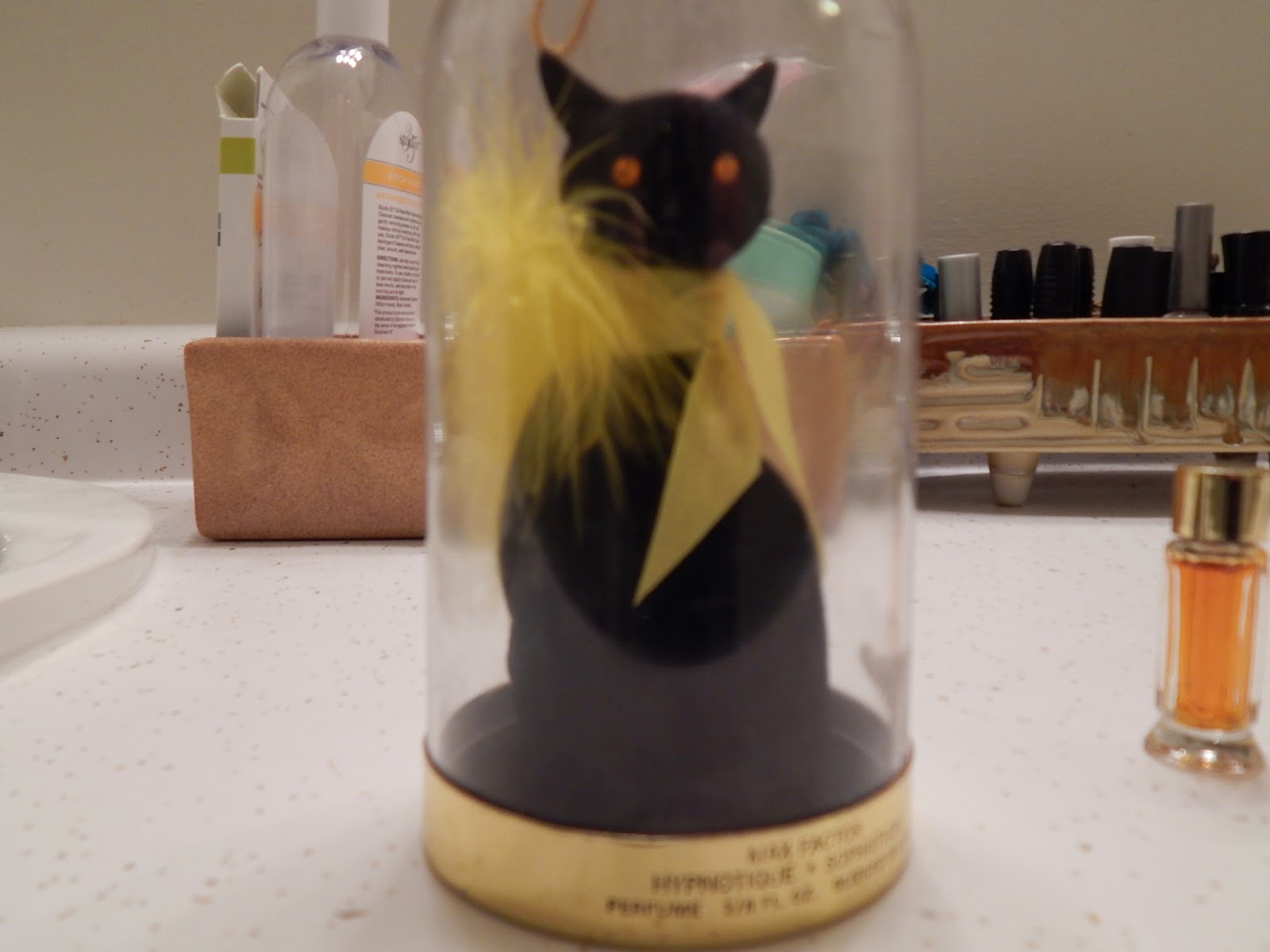 Of course I bought the, Sophisticat promotional version from the early 70's. But like most things that end up on this blog, there's a story about that... 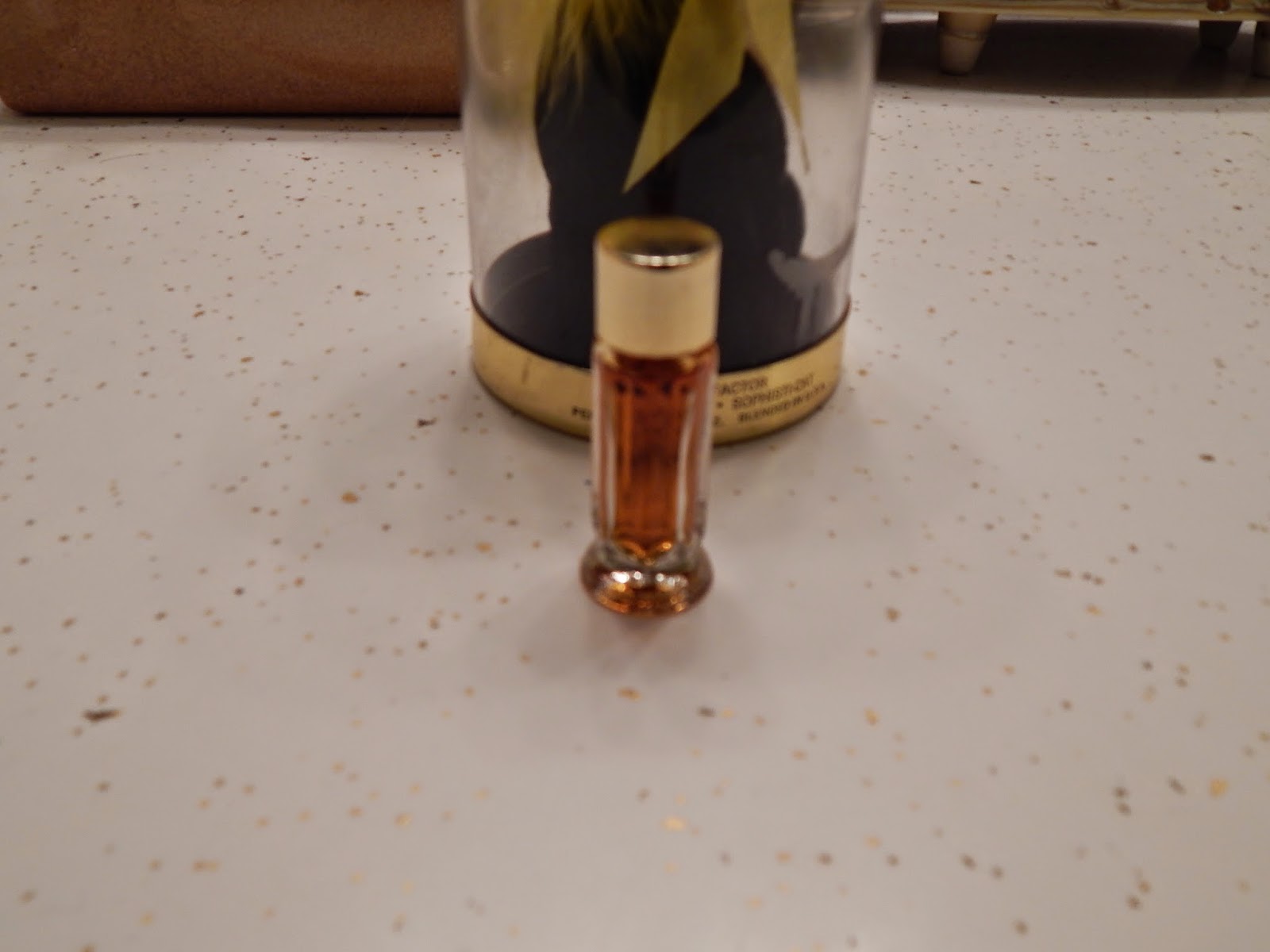 Internet shopping is a wonderful thing. Anything (practically) that you ever had, wanted, or can imagine needing is a couple of mouse clicks away. I don't get carried away with this sort of thing, but I can certainly understand how people do-everything is right there. So it was that after forty-five years of being denied the opportunity to play with the Sophisticat that came packaged with a tiny bottle of Hypnotique my mother received one Christmas, I tapped a search into Etsy, and a few days later my long coveted flocked feline arrived. I mean come on, she has rhinestone eyes and a feather boa.

I never had any interest in the perfume-Hypnotique was everywhere and it wasn't terribly expensive. Had I really wanted a bottle I could have gone to the drugstore with a few week's allowance and purchased my own. I wanted the cat. After Christmas, the cat wasn't around, save for the one that sat on my mother's dresser. She didn't want the perfume either, and it remained trapped beneath the dome along with the cat I was forbidden to play with. In hindsight, and being a parent myself I'm sure it was to prevent her bedroom reeking in cheap perfume, knowing I would inevitably spill it. Fair enough, but as a child all I understood was that the cat inside that plastic showcase was off-limits because it was special-and not for me. Fuck that, I  am too special. It took 45 years and the development of Internet shopping, but here I am with my Sophisticat at last.

The dome is permanently gritty-like it had been on a high shelf in the home of someone that liked to smoke as she sat admiring her Sophisticat. There's some sort of stain on it as well, and the flocking has started to fall from the cat clinging instead to the inside of the dome. The glamour seems a bit cheap all these years later. There was that moment, when I went to open the sealed dome that felt a bit like Howard Carter entering Tut's tomb for the first time. That air, sealed so tightly for almost half a century...I don't know what I was expecting really. A loud, "pop?" A whiff of air from 1970? Some sort of terrible lung condition from breathing the decomposing material on the cat-a sort of Max Factor's "Curse of the Sophisticat?" A genie?  Eventually I released the dome from the base without any dramatic suprises, and freed the tiny bottle of Hypnotique from the base. I slapped that dome back over the cat as fast as possible...just in case.

The tiny bottle is nicely made-it has some real heft to the base, ensuring that I wouldn't have (easily) tipped it all out as a child after all. The cap was tight, which is often a bit worrying with vintage perfume as you can't always be sure it will budge. I was grateful for the nicely designed bottle as I was able to grip firmly as I finally unscrewed the top.

There wasn't any evaporation that I could see (probably something to do with that extra layer of sealing beneath the dome) and my first whiff was unpleasant. Sometimes the top notes change, or disappear in older fragrances but that was clearly not the case here. This is an, "older" fragrance in both physical age and spirit. Yes, after a bit there's the floral chypre that everyone mentions, and then some spiciness- but until you get there?  Remember eighth grade science when you were presented with a frog pinned to a board for dissection in science class? Yeah, that's the first part, then you get a bit of the teacher's lunch still on her breath as she leans over to check your work-she ate some sort of salad, and her shirt still smells of Downy fabric softener. You're hypnotized-but not in the way the noses at Max Factor probably had in mind. I liked Biology, but I don't want to smell like it. I was expecting Liz Taylor in a caftan, and I got Mrs. Bass in a lab coat.

I keep trying to appreciate Hypnotique, and I just can't. It isn't horrible, but I'm frustrated as it has all the elements I typically like in a fragrance. What am I missing? This was a fantastically popular fragrance for many years. I like to think I'm open-minded when it comes to older perfumes, but this one? I can understand why there's so much of it available on the Internet-it was a popular gift that remained unworn between the paws of a cardboard and faux velvet cat. Thinking back to the other popular fragrances of the day, why would you reach for Hypnotique? You wouldn't. I wouldn't-and neither did my mum.

I don't know what ever became of my mother's Sophisticat. I know I never got my paws on it. I suppose at some point she likely pitched it forgetting (or maybe not knowing) how desperately I wanted to play with that shiny-eyed cat. It would have been a disappointment I'm sure, as the cat is part of the base itself and would have been clunky to play with. Perhaps in 1970 the material would have been less prone to crumbling at the slightest touch, but I can guess the rhinestone eyes wouldn't have lasted more than an hour. The dome has a string-to hang as an ornament on a Christmas tree, I guess. Just imagine the excitement Christmas morning to discover that someone cared enough to go to the drugstore and spend $3.99 on a bottle of perfume that smells like a frog plumped-up in formaldehyde. Oh, I'll bet that was a special Christmas morning 1970 for plenty of women across America. "Oh darling, you shouldn't have." Really, you shouldn't have. Really.
Posted by Goody at 8:28 PM
Labels: 1970's, Childhood Memories, Hypnotique, Max Factor, perfume

I had completely forgotten about Sophisticat! A grade-school friend's mother had one, and I adored it. Same mother also had real roses in one of those weird water-filled domes on her coffee table.

This weekend we're going to a huge antique fair that is a very likely place to score Sophisticat. Worth dipping into the unemployment capital, I think.

That is an awesome thing to own, and I wish to see Curse of the Sophisticat. I hope it has Christopher Lee and Vincent Price in...

@Propagatrix
You don't by chance have one of those lamps with a Greek goddess with the oiled strings around it that moved looking like raindrops-do you? You might be able to pick up one of those AND a Sophisticat.

@Mim
I'm going to hang it on the Christmas tree this year, and wait for the puzzled looks from visitors.

It is always so interesting how when we were kids what we thought was so amazing does little to impress us now. I do love online shopping though and as you said it is amazing what you can find! Too bad this perfume was not as special as you remember! :)

FOUND at today's antique fair! I am still shaking in disbelief.

Did you buy it? We can have matching perfume trays ;)

My granddad way back in 1970 had to do the christmas hifts as granny was unwell. My sister hot Electronique i got Hynotique. Was a huge leap for him as he never shopped. First grown up perfume i was 17 my sister 16.

The good old days before gift cards when you had to buy something by guessing! That's a nice memory of your granddad too.

This makes me sad to read as I was 18 in 1970 an loved wearing Hypnotique. I always felt so grown up and pretty when I wore this perfume.