In A Country Of Three Hundred Million People...

...there must be at least a handful that aren't idiots. I keep looking, as I'm an optimist at heart. 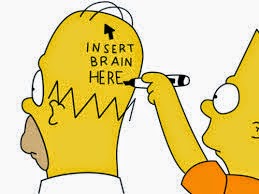 I've worked retail, and it sucks. I try to be sympathetic to the over-worked, under-paid clerk behind the register. I really do, because I've been there. However, when you ring up my tights at $15.00 each instead of 3 for $5.00 I'm going to say something. I was nice about it, but she really thought I was just trying to make her life miserable, and should just take them so she wouldn't need to re-ring them. Right. Then, she got really hostile about it. If it had been a buck or two, I might have let it go seeing what a miserable, overwhelmed sort of day she was having, but $40.00 is a bit beyond my generosity. 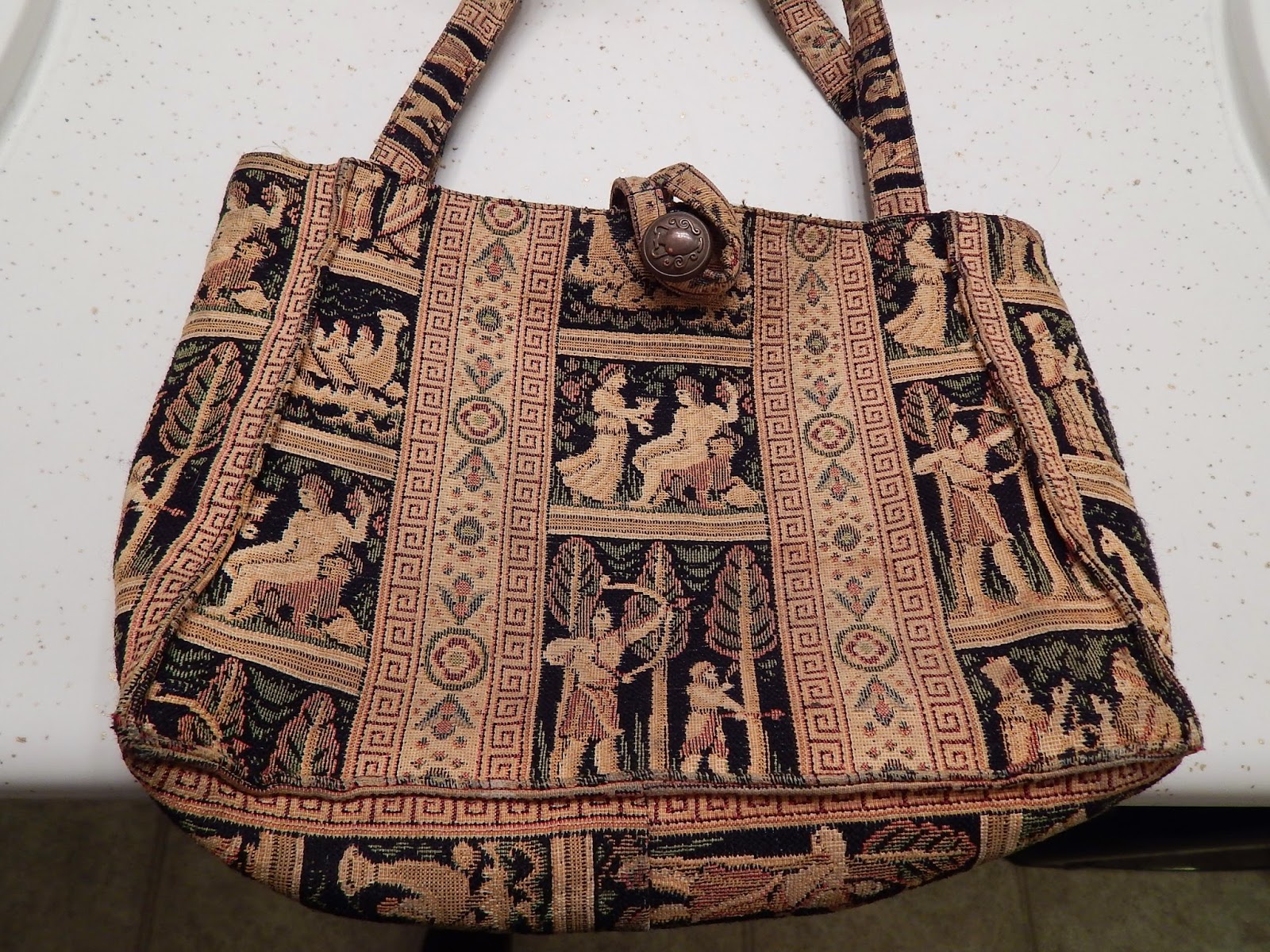 I mean, come on. I'm carrying a handbag that cost .75 cents. Does this look like the sort of handbag that could just blow-off forty bucks? Nice, yes but Prada it ain't. 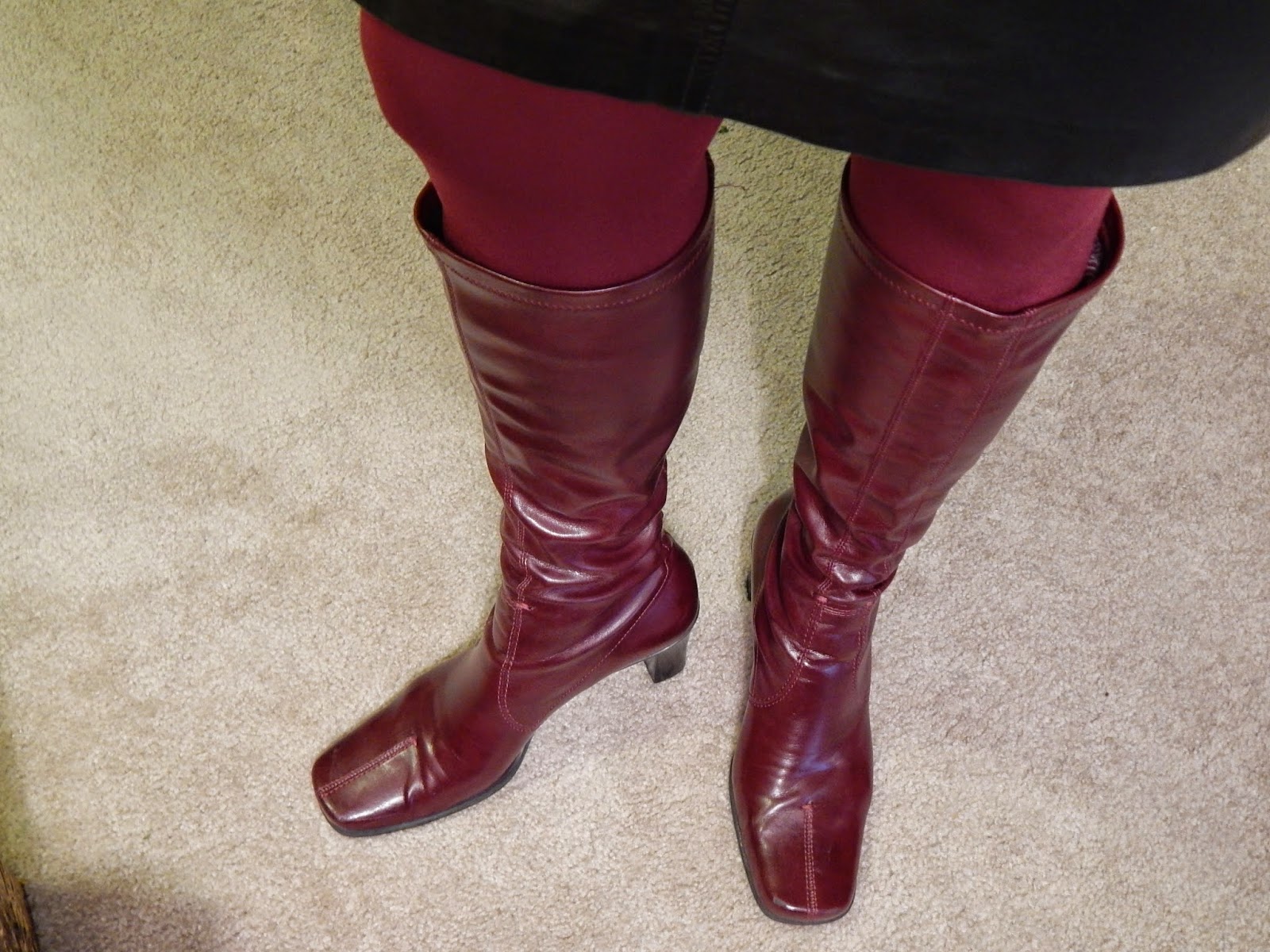 Or the $7.99 boots? These don't even pretend to look like leather. 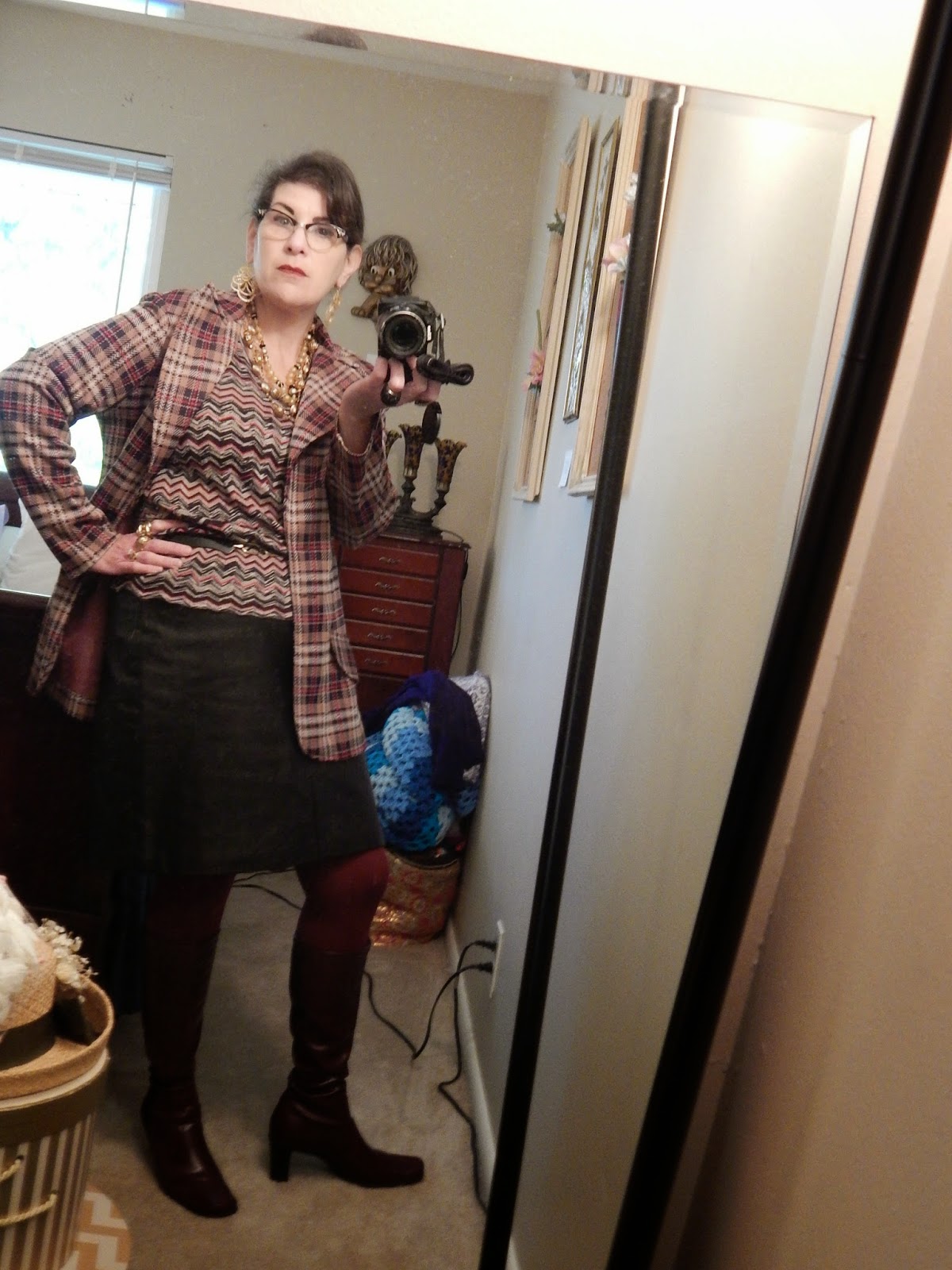 Anyway, I find that I like people much better when I don't have to deal with them, so I came home and put on a gigantic pot of vegetarian cabbage soup. Like rich people dine on. I suppose I'm labouring over it, but I do think young people don't really understand money, even when they're working for minimum wage. I'd say I'm more exasperated than angry-you want to pull their ear-buds out and scream some sense into them.

Right, now let's talk about something that brings some enjoyment into my life-great clothes. 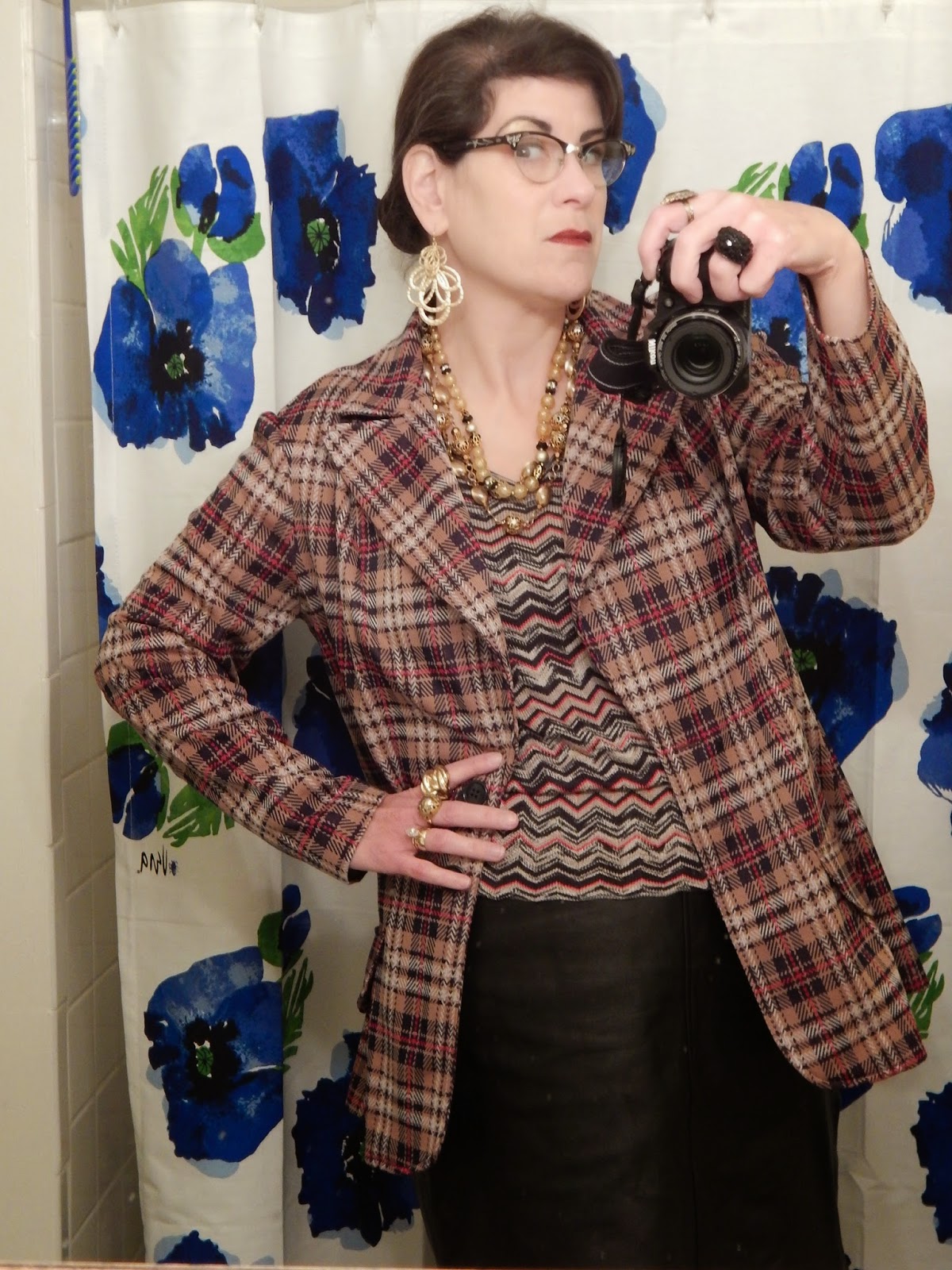 I do like a bit of pattern-mixing. Mixing textures is nice too. I've had this leather skirt since the early 80's, and although I wore the hell out of it, I took good care of it. I'm glad I did, because after many years of thinking I couldn't wear a short leather skirt, I've finally come to my senses and realised, of course I can wear a short leather skirt. In fact, I should do it more often, as it makes me happy. Know what else makes me happy? Baked potatoes. I had one last night for the first time in I don't know how long-and it was a joy! Nothing fancy, just salt and butter. It was the best baked potato I've had in recent memory, and it wasn't even an exceptional spud to begin with. Sometimes you have to remind yourself of the things you like such as leather skirts and baked potatoes. 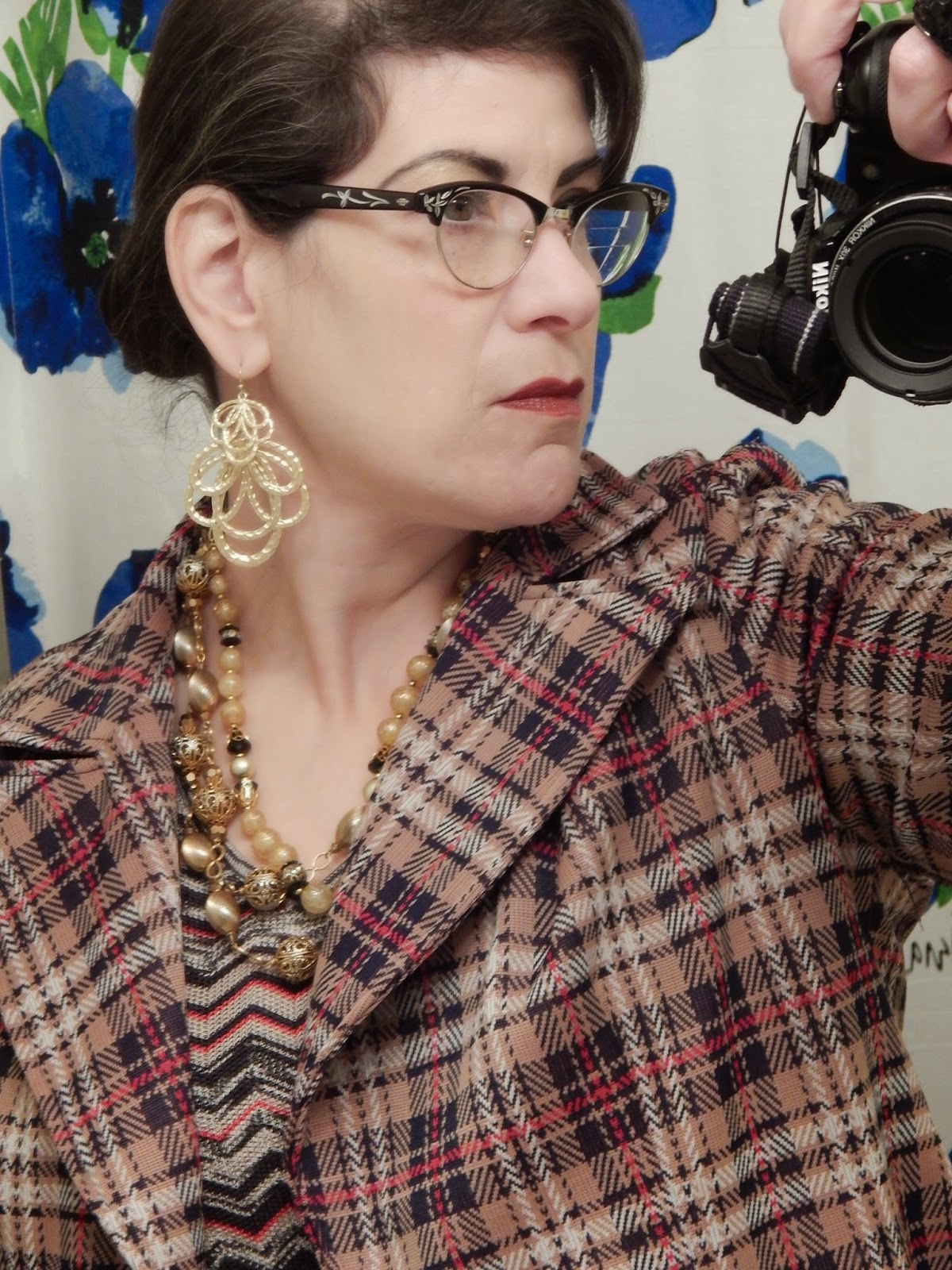 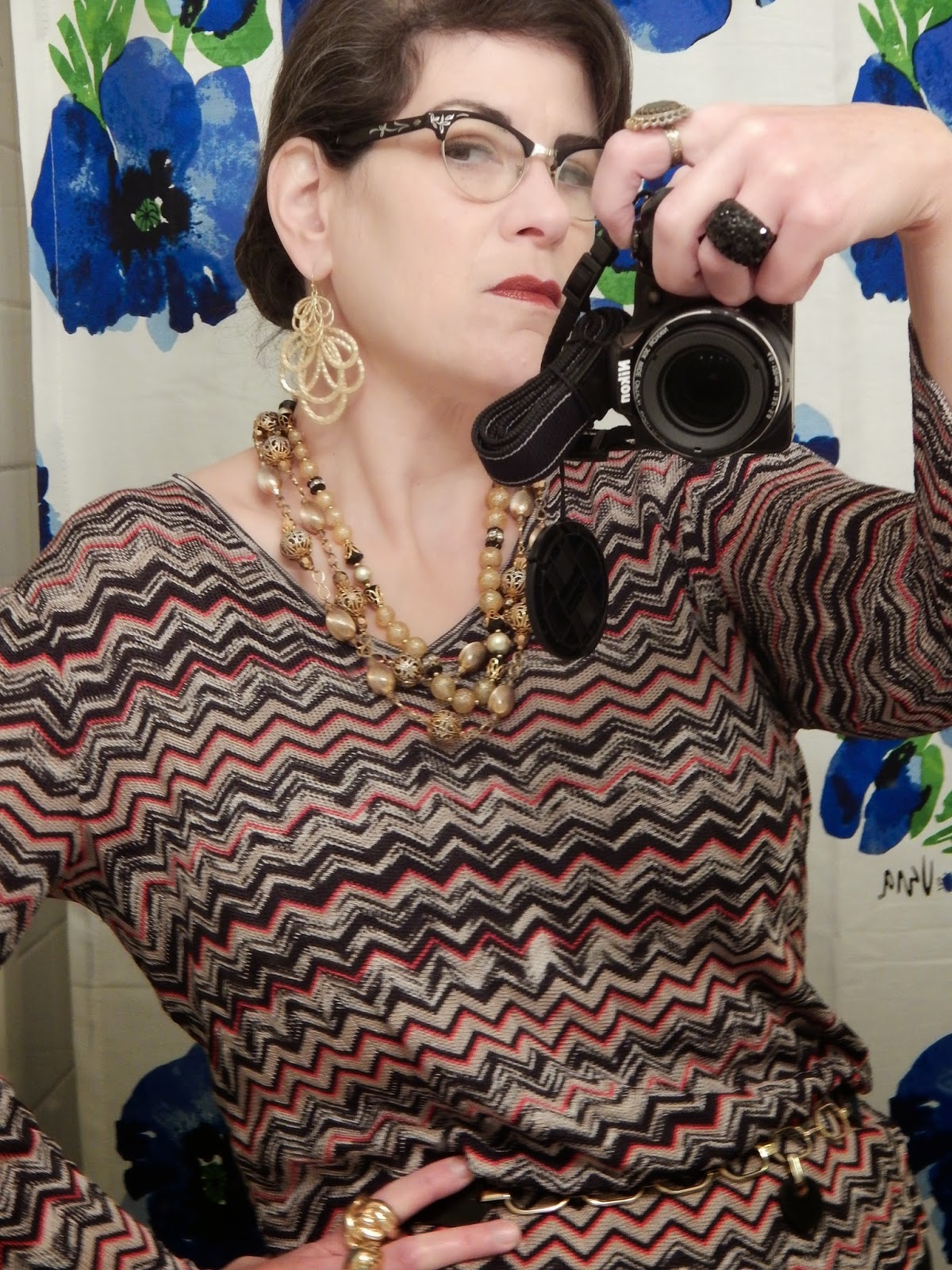 Is it just me, or are people becoming more unreasonable in their expectations, particularly with respect to their failings? Is it the coddled generation that never heard criticism? Do I need to begin speaking by praising their efforts? "I see that you're doing a very good job of keeping your register area tidy, and you're working so very hard. Good for you! By the way, you overcharged me $40.00 but I know it was just because you were doing so well you got ahead of yourself. But good effort anyway. Let's see if we can fix this now..."

Snap, we had baked potatoes last night too. Mmmm.
Of course you can wear a short leather skirt, you have fabulous legs, so why not show 'em off? That zigzag-y top reminds me of Missoni, lovely print.
Yeah, I hear you about the No Criticism generation. If I voice any critical ideas about anything to do with the kids, other parents seem to think I am being awful. I'm not, I give plenty of praise where it's due, but reserve the right to point out when they've done something wrong. How am I helping them if I say that every single thing they do (however poorly) is fantastic? xxx

I've had to switch dentist because the young one just could not accept that his work was not done satisfactorily. I really do shudder to think of my "golden years" trapped in a care facility with some moron charged with my care.

We have a variety of potato here called, "Fingerling" (they're long and slender) that really do sound like they ought to be used in an obscene manner.

I love your new header! Yes. I am still on your lawn. Ohhhhhh I could go on and on about people phoning it in. Half of the world is semi checked out. But you mentioned potatoes....with butter...so I have to excuse myself and go pop a spud in the oven. You look like the coolest girl in school circa 1972! Love!

Heh, I would have killed for a leather skirt in 1972! I did really rock a good smock top though!

I worked in retail only one day a week for two years and people was what killed the job for me. Especially the ones that turned up when I was trying to close but I was always polite and helpful while screaming on the inside. I think politeness and being helpful has slid down to being not so important with the younguns and they definitely seem to require alot of positive reinforcement these days. A teacher once gave my Max a certificate for listening in class. ARE YOU MAD? I took it back to her and told her to never reward my son for doing what he should be doing. Yes the world has GONE MAD!

Between the chevron and the plaid, I am getting a distinct Twin Peaks vibe from this ensemble. Love it.

Canada has about 1/10th of the US population, but I can relate to your sentiment all the same, believe me. I do like to look for and see the best in folks, but sometimes it seems like all one does is spend their day repeating the old adage "it takes all types", as you work your way through a maze of ever increasing stupidity, rudeness, and even crime (which, disturbingly, is on the rise in our part of the province).

Thankfully like-minded, wise folks like us can connect online and be there with an understanding ear for each other when something really boils our blood on that front.

*PS* Agreed, I see that same mindset when it comes to money and the young (by which I mean even people slightly older than myself as well) all the time, too. It's perplexing and a tough frightening at the same time.

Love the colour of those non-$15 tights with the leather skirt and agree it's good to remind yourself of the things you like.

I still have my Wilsons black leather mini from 1990. Alas, it is a 12, and I cannot presently cram my considerable hiney into it. I'm keeping it anyway, in the hopes that someday we will be rejoined. Then I'll wear it with torn fishnets and a Ramones T-shirt, because people at Target always need a laugh.

Aaaah, baked potatoes! (Or 'jacket potatoes', this side of the pond.) I love them covered in butter and grated cheese.

£15 seems an awful lot for a pair of tights, you'd have thought she'd have noticed!