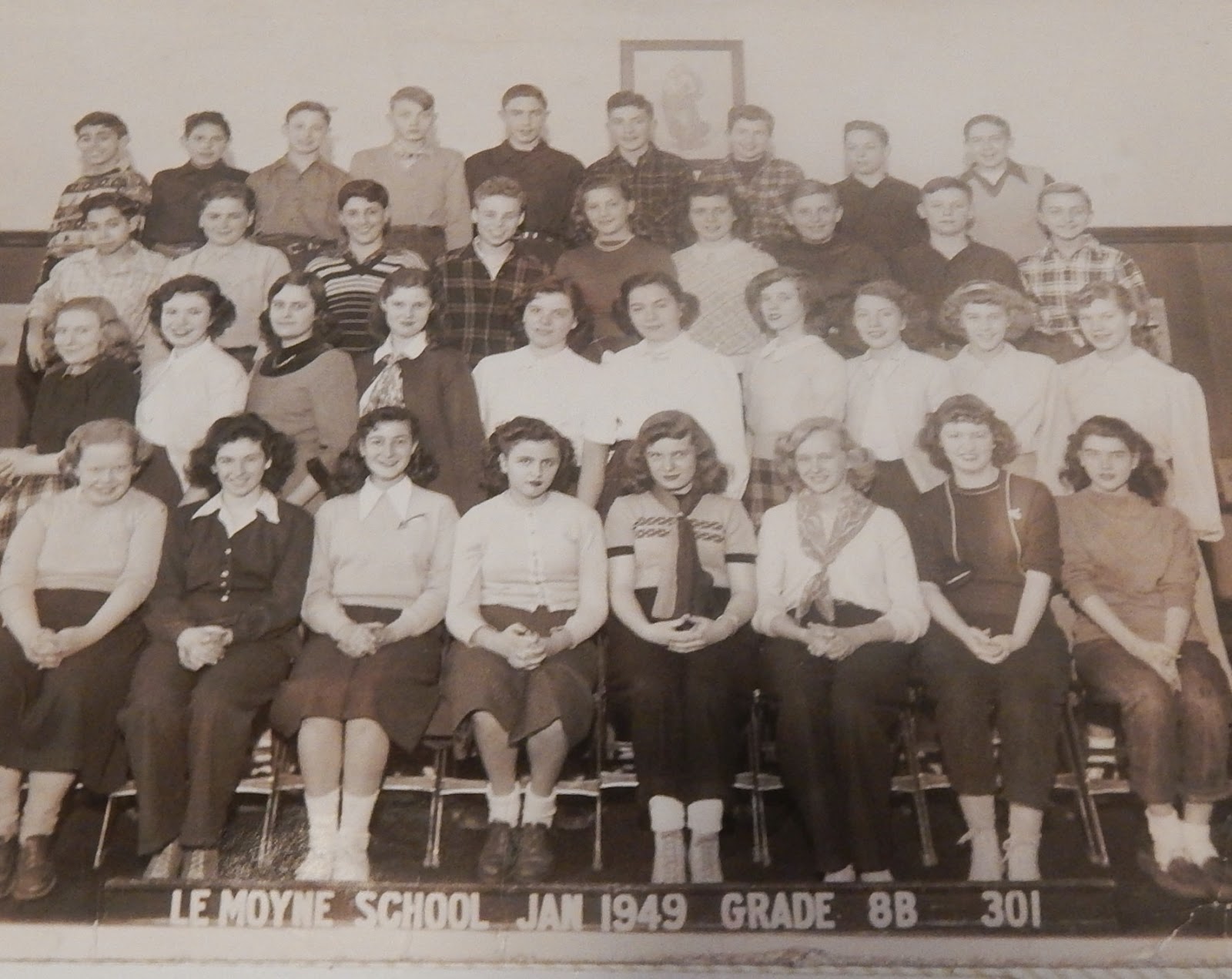 I was struck, looking through my parent's class photographs at how much they tell you about changing fashions. I was surprised to see girls in this 1949 school photograph wearing trousers. As far as I'm aware that was not permitted ordinarily. Why this exception would be made for, "Picture Day" I don't know. Sadly, I can't see if my mum is wearing a skirt or trousers as she's in the second row (5th from the left). She lived in a well-off neighbourhood, but I think the war and rationing did quite a bit to level things. I'm sure whatever she was wearing, it had probably been darned repeatedly (or it belonged to my aunt). Girl second from left, bottom row is wearing a very smart looking suit. 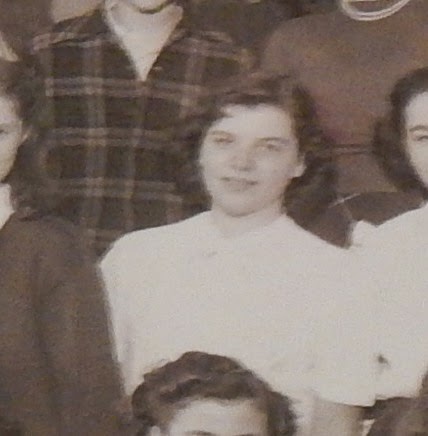 My mother's trademark, "Not a smile, smile." 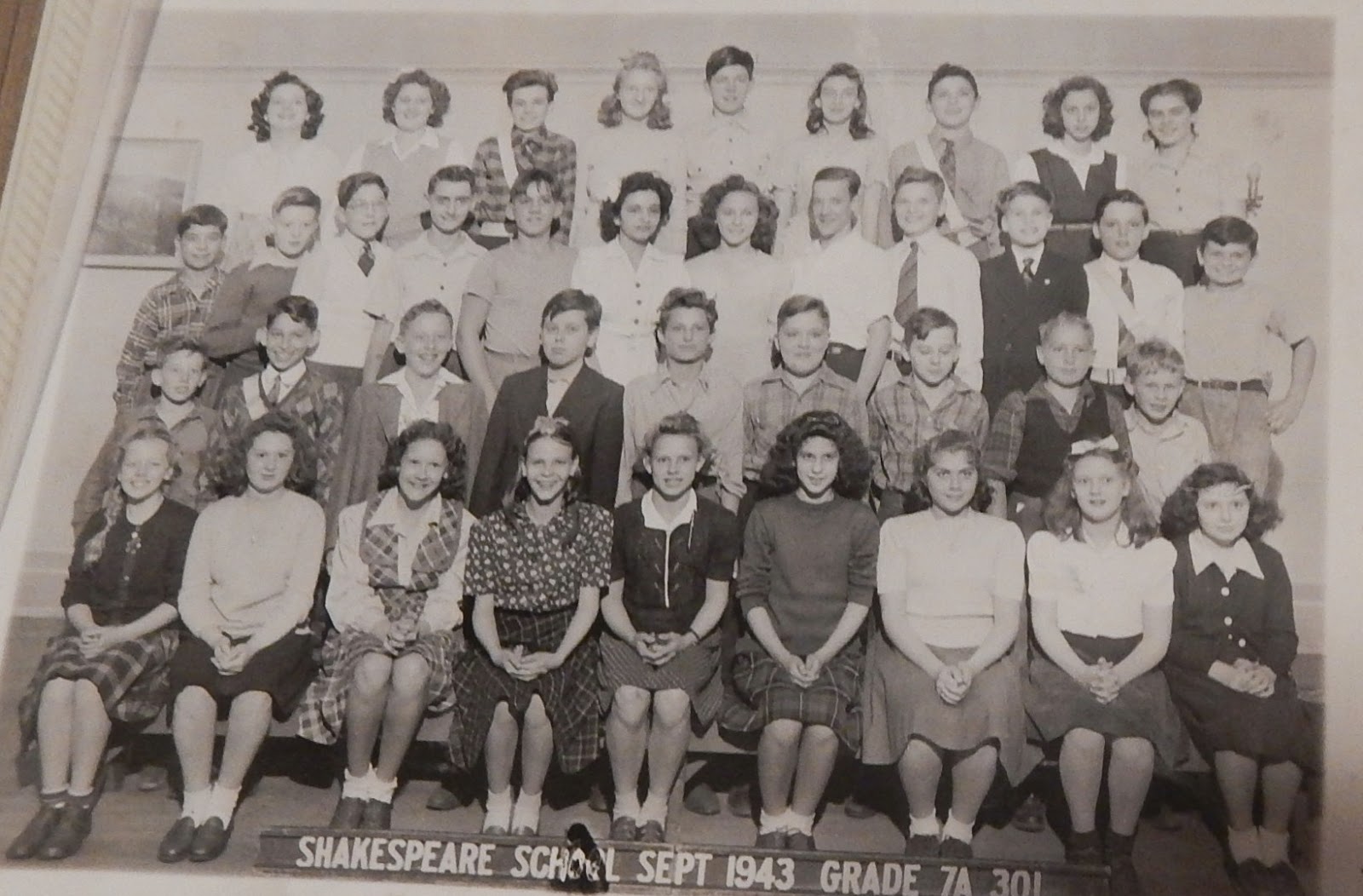 Dad grew up working class on the South Side of Chicago in the Hyde Park neighbourhood. His parents had a news stand. I have a copy of his first work permit from 1934! At four years old, they sent him down the block on Saturday nights with his wagon filled with papers to sell to people coming out of the cinema. I don't think his case of child labour would have raised a single eyebrow at the office issuing the permits. Dad is top row, third from the left wearing his crossing-guard sash.. 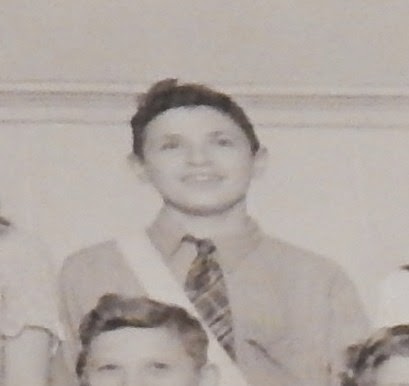 He's smiling because he just bullied some kid into handing over his lunch money, a trait that will follow him into adulthood. He's 13 in this photo. 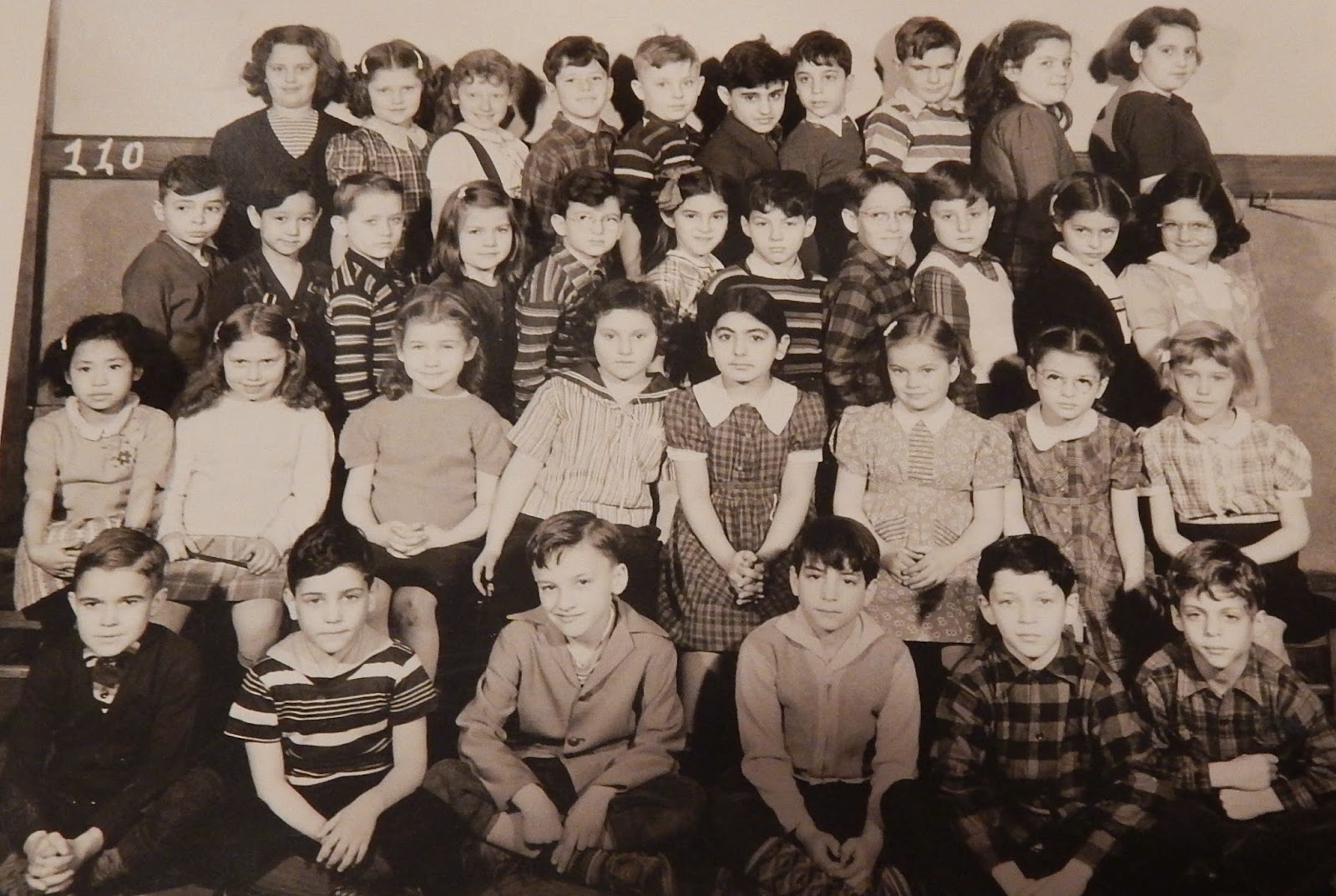 Mum's school mid-40's (she's top row, second from right). The girl second row from the bottom, centre is wearing a great sailor top that looks like it might have been a middy, re-fashioned from perhaps her mother's old clothes. Oh how I wish we could go back and move them around so we could better see the outfits. 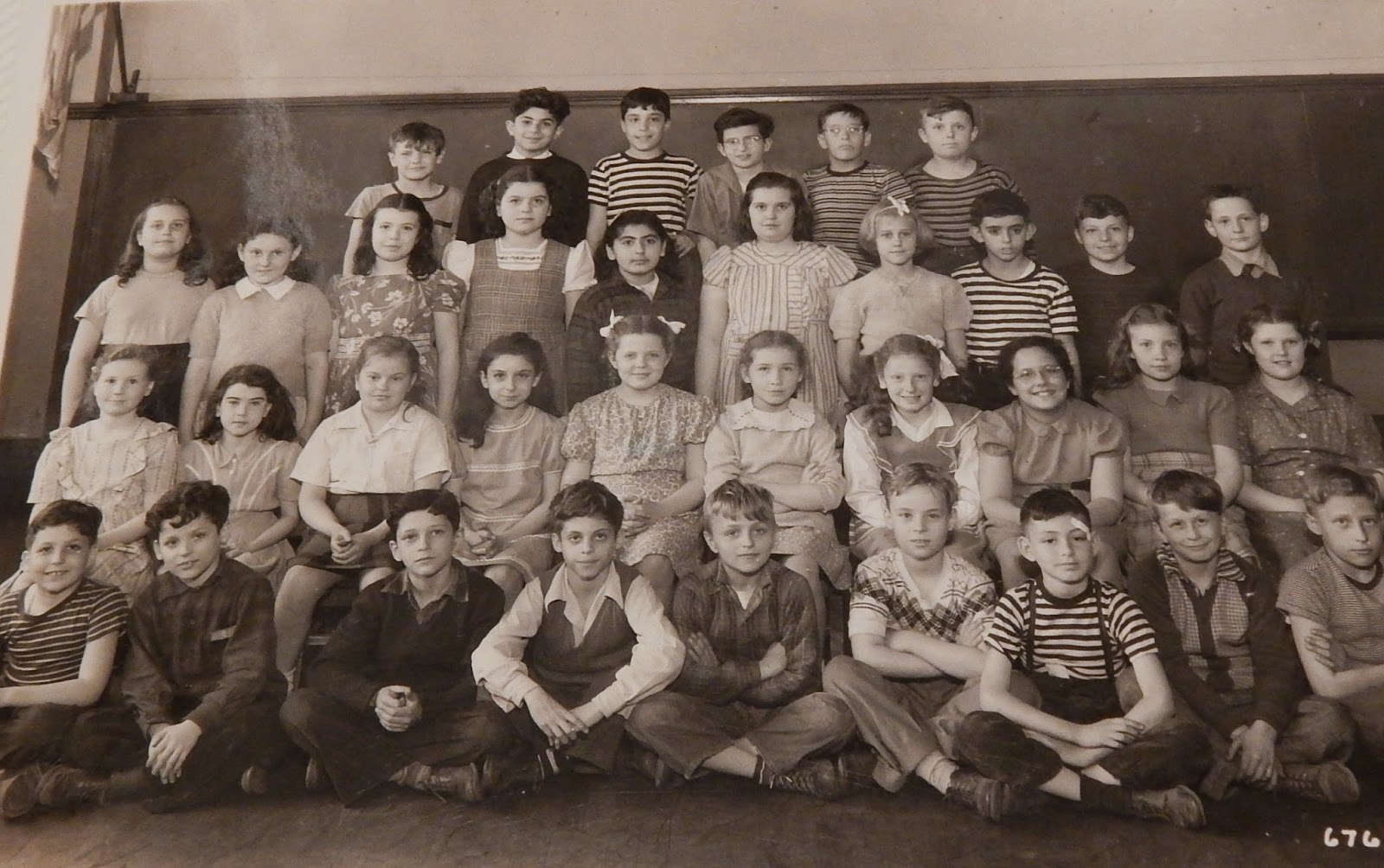 Mum's school-early-mid 40's (She's second row from the bottom, centre of photo with bows in her hair). The little girl third from left in the same row as mum hasn't mastered sitting in a short dress yet. pro-tip: Cross your legs at the ankles.I like the argyle sweater on the boy in the bottom row. The boy beside him is wearing a short-sleeved sweater, something we rarely associate with menswear today. Dad's school 1939( He's thrid row from bottom, 5th from left). Note the twins second row from the bottom, far left. My dad always called them, "The two twins at my school." It drove me crazy. "Dad, the "two" part is implied. Just say, "Twins." But he just couldn't manage it. So that's the, "Two Twins." These days they would put them in different classrooms. My Dad wasn't supposed to be in grade three, but they had an extra desk, and were short one student so they came into his classroom, looked for the physically largest kid, and promoted my dad to grade three. 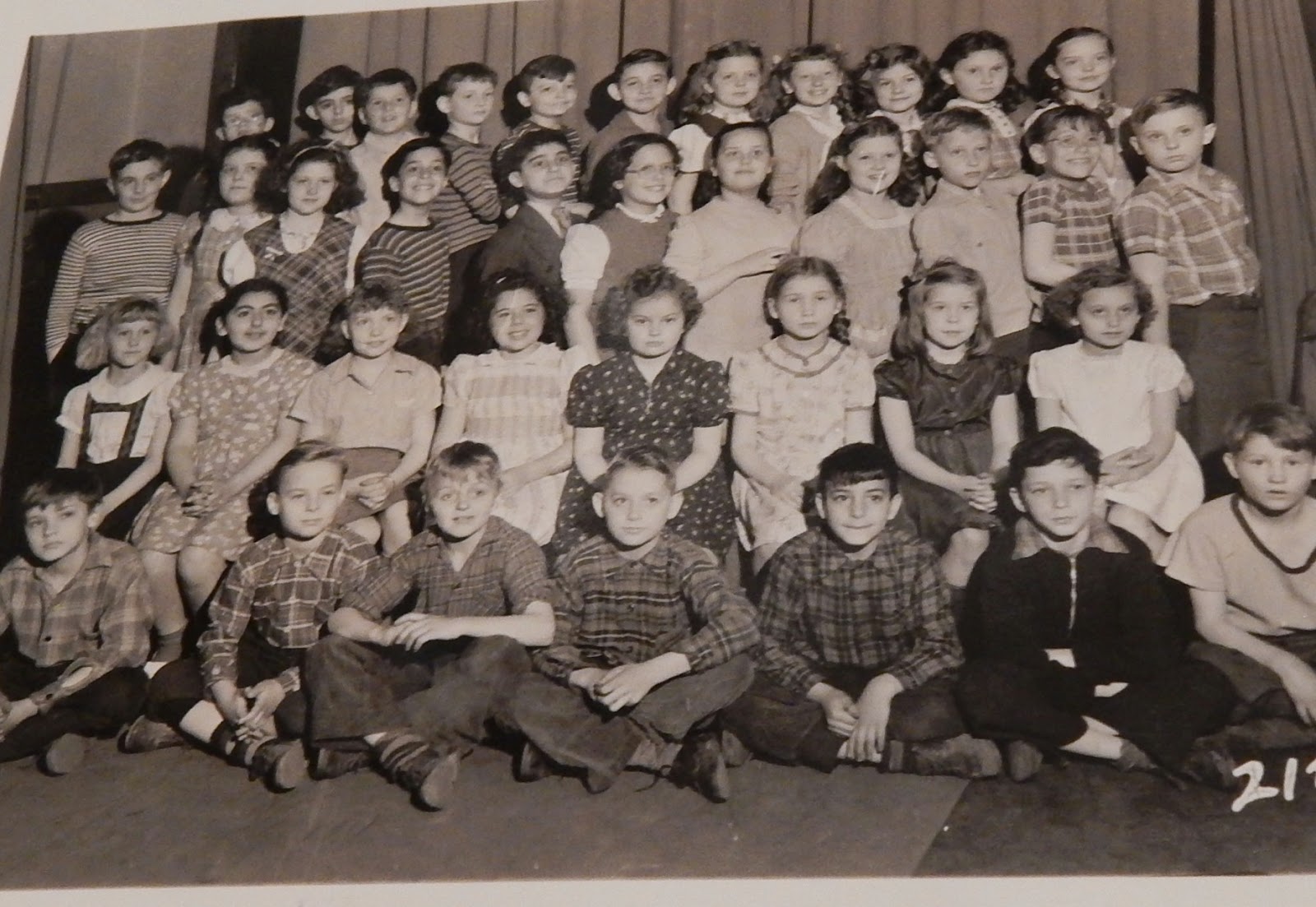 Mum's school early 40's(Third row from bottom, second from left obscured by girl's hair). I really like the girl in the second row from the bottom, centre with the Shirley Temple curls. She looks like she could beat the crap out of you. 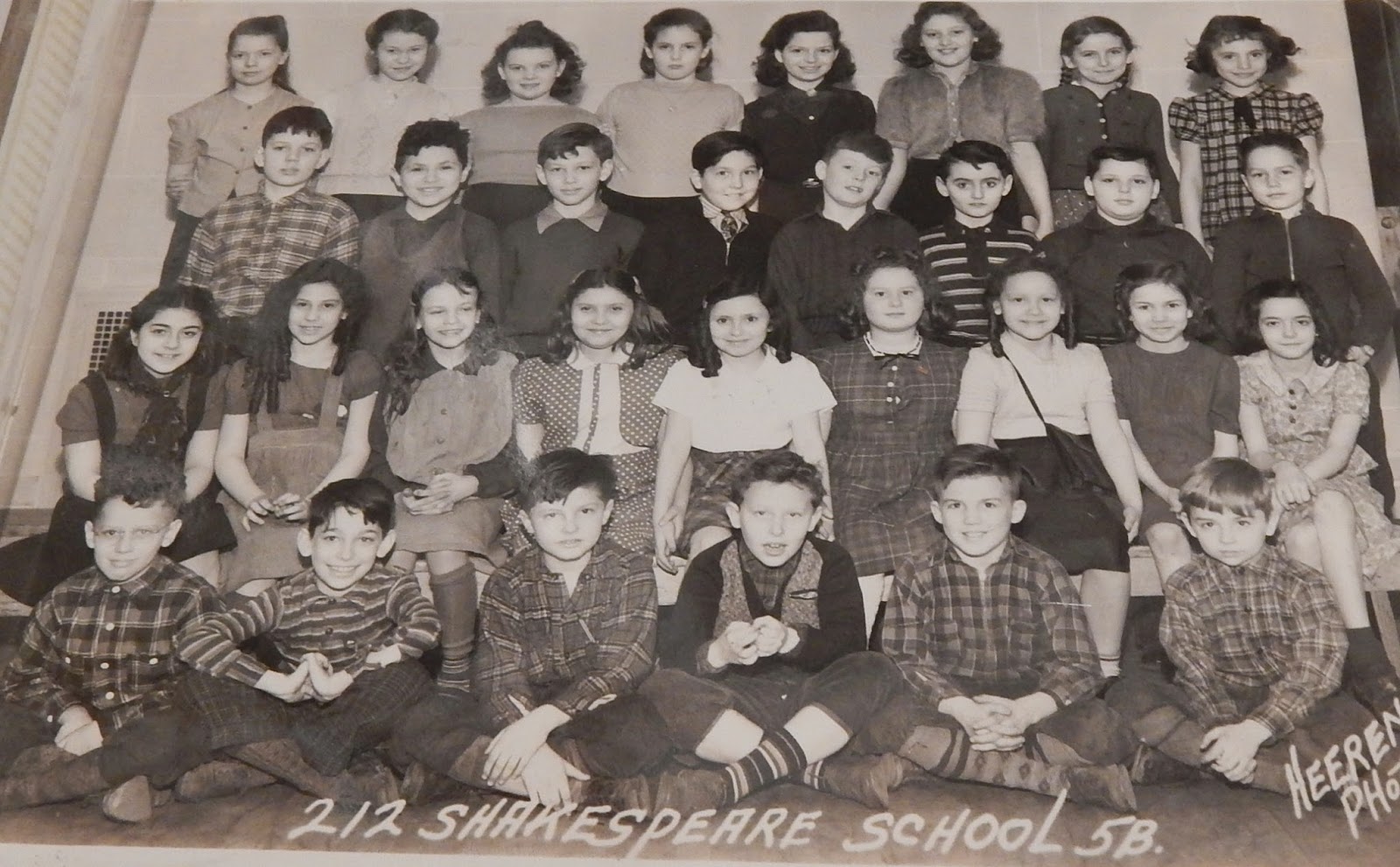 It is interesting to look at how multi-cultural my dad's school in Chicago was. You don't see anything but upper-middle class white kids in my mother's photos.

Goodie! I just love these photos. Your parents! Damn. So cute. Don't you just love looking at photos of your parents when they were young? And your Dad working at four. My Dad used to sweep up at his father's bar in Butte, Montana when he was just a kid. Can you even imagine our kids working like that? And the clothes. I know!!!! Awesome. Thank you for this. Big Kiss!

My parents were children of the Great Depression. Dad's family were plumbers who invented indoor showers with mulitple heads and always drove new cars. Mum's people aspired to piano lessons for the girls and violin lessons for the boys. Dad insisted, "We didn't know we lived in ghettos, just neighborhoods of Irish-Catholics, Hungarian Jews, German Lutherans..." Household chores were unpaid child labor, so Dad had a stove-lighting service for the ladies who kept kosher. Mum found a job plucking chickens for a woman who pioneered in carry-out meals. Both blew their earnings at the movie theater watching "The Little Rascals".

Looking at old photos always makes me happy! I always imagine what life was like and how different it is today. Sometimes I wish more people dressed as they did back then, looks so much more presentable. I loved hearing about your parent's stories especially how your dad at 4 years old sold papers out of his wagon. That would be hard to say no to!

Awesome old school photos and I loved your comments and thoughts. I think I have a few of my dads, tiny school in the country so small photo!! I have all my old school photos, maybe I should share them for a game of 'Where's Sue'?

@Connie
I really can't imagine having to work so young. And our kids? They can't even go to the park unattended. Work? Goodness no, not today.

@Beth Waltz
My dad would get annoyed with his younger brother for saying they were, "Poor" because he never viewed it that way. I've never met someone that said, "I grew up in a ghetto." The designation of what constitutes a ghetto almost always comes from outside the community.

@Curtise
It would be fascinating to see if you can round up some old school pictures from your family. I was amazed to find all these (there were more I didn't post) because although the class photos would be taken, buying a copy was an added expense. Knowing how tight with a dollar both my grandmothers were, it is surprising they would spend the money.

My dad said people would try to trick him and my uncle by only giving them a penny, and they'd have to call after them that they needed two cents. Imagine, trying to steal a penny from a child. I know it was the Depression and all, but still.