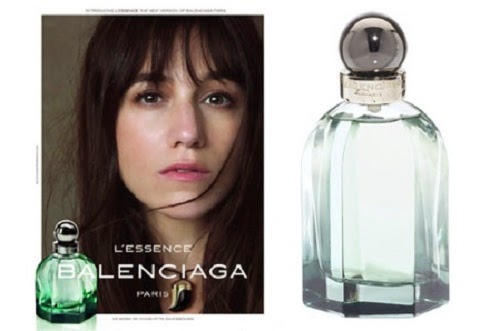 Maybe I've seen too many Lars Von Trier movies to take this woman seriously as some sort of aspirational image to sell perfume. Yeah, I know what you're thinking, but Deneuve didn't become the face of Chanel until much later in her career, and by then we'd all forgotten about Repulsion. Mostly. Anyway, I hadn't seen the ad before purchasing the fragrance as a more or less blind buy. Would it have put me off? Probably not.

L'Essence Balenciaga sounds, on paper like a fragrance I would loathe. The nose behind it is Olivier Polge, who has never, ever developed a perfume I can stand to be within 100 yards of (Flowerbomb *shudder*). I didn't know anything about L'Essence when I bought it (sometimes I do that, dazzled by the super-low price tag at Marshall's) including the fact that it is nearly an entirely green perfume save for some violets. The descriptions I've since read of it as ozonic and aquatic certainly would have kept me from the purchase. Fortunately, I knew none of this, and happily tore into the box in the parking lot (don't lie, you do that too) to discover the cute little carrying bag inside, and the loveliest bottle I've seen in some time. I'm rarely impressed by packaging, but I must admit I do like the overall presentation. Turns out, I really like the fragrance as well.

The common complaint I'm reading about L' Essence Balenciaga is that it comes across too masculine. I try to avoid being too influenced by gender in fragrances as they tend to be based on  outdated stereotypes, and a whole hell of a lot of marketing. Any good fragrance will be more or less unisex with perhaps the exception of something sickly sweet like Chantilly, which truthfully shouldn't be worn by anyone, regardless of gender. When I evaluate a fragrance I don't consider who it is marketed to (that would be a legitimate consideration, just not where I tend to go in my assessment).

L'Essence is not subtle with the green. There's vetiver, and a good, strong cedar that hit me directly at first spray. Both are still there dominantly in the dry down, but the sandalwood and patchouli come out to give the fragrance *some* depth (but not as much as you might expect) along with significant dose of violet. On paper, sandalwood and patchouli are two things I could live without save for the smallest amounts. The thing is, L'Essence Balenciaga is well put together. At no point do I get the incense quality that so  often accompanies them. What I do get is a lovely fragrance with excellent staying power, and for lack of a better word, the earthiness modern perfumes seem to keep trying for, and failing to achieve. I could swear I smell apple in there, though it isn't listed in the notes. Perhaps an orchard on a cool, damp morning then?

L'Essence does seem to be lacking something, which I'm not quite able to put my finger on. A well-rounded perfume needn't be so complex that there are dozens of notes, but it shouldn't leave you scratching your head wondering what was left out. The composition, lovely as it is seems to be one-dimensional. That isn't always a bad thing, but something is missing here that would take L'Essence from a really good perfume to a great one. Oak moss, perhaps. Maybe civet? As both of those are now restricted for use I wonder if perhaps Polge thought that as well, but went with the next-best thing based on what was available? The fragrance launched in 2011, long after many of the regulations went into effect.

All cons aside, this is a fragrance I can see wearing year round, but it seems so appropriate now, as the ground starts waking up and pushing forth the first bulbs of spring. I picture snowdrops, daffodils, and hillsides of purple heather when I give myself a spray of L'Essence. Candied violets, peat fires, pine scented cleaning solution-these are what L'Essence evokes for me in the nicest of combinations. Like eating a violet pastille, or Mr Clean romping through a field of clover. Now, that would be one hell of an ad campaign!

Have you ever fallen for a perfume that on paper wouldn't tick any boxes?

Perhaps because I don't wear perfume on a daily basis, I'm a sucker for the grand occasion perfumes that one wears on, well, grand occasions. Bal a Versailles is a tad over the top, but there's an ancient apothecary version of White Rose that I adored. Can't remember the name of the English firm that sold it, but they specialized in "the fragrance used by Empress Josephine, et al." Somehow their florals did feature that "after a rain" cleanliness you call the scent of apple.

@ Beth Waltz
Bal a Versailles is over-the-top? I had a neighbour that would alternate between Bal a Versailles, and patchouli oil, both scents lingering in the hallway looooong after he'd gone to work. One summer I had to be out of town for a month, and I agreed to loan him my car. Somewhere, there's a green Plymouth that still reeks as it did in 1994. I'm sure of it. Now I'm nostalgic, and want a bottle!

As for the white rose, the only thing that comes to mind immediately fitting that description is Creed. Could that be it?

The card turned up in my morning coffee! Caswell-Massey's Floris White Rose! And they're still selling it from www.caswellmassey.com ... but not to me, not a those prices. Good grief, they want $60 for 4711!

So what is your signature scent? The one perfume that just says YOU? Is there one?

@Beth Waltz
Ah, yes well I do try to stay away from them for that exact ($$$) reason. I don't mind forking it over for something special, but the mundane shouldn't cost an arm and a leg.

Dior Homme is a good one! I wouldn't say it is similar to Balenciaga, but in the same spirit perhaps.

@Connie
I wore Mitsouko almost exclusively for years and years until it was reformulated. Now I save my carefully hoarded supply of the old stuff for days when I really need it. I've always enjoyed trying out other fragrances, but I do tend to keep returning to Mitsouko. I'm wearing Yendi today and I could swear I just gave myself a headache from it. I LIKE Yendi, it seems so unfair that it should be headache inducing.