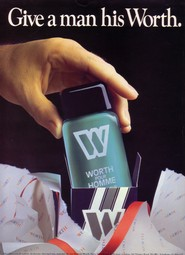 Or maybe you could just skip the gift and go out for a nice dinner instead?

I have never been so thankful that I dabbed a fragrance on a handkerchief before applying it directly to my skin as I was after experiencing Worth pour Homme. A dab.  Barely any, and I know it will take several launders to rid that odour fragrance from the cotton. I did sadly, still get a bit on my hands. The word tenacious comes to mind, along with, chemical warfare. I'm not a fougere lover-just ask the banished bottle of Jicky.

I purchased a small, sample sized, vintage bottle to satisfy my curiosity about a fragrance so revered as, "Classic" and, "The ultimate men's fragrance." Sure, that's subjective but it was still enough to convince me I needed a bottle. When I think, "Classic" men's fragrances, scents like Aramis, Habit Rouge, and Guerlain's Vetiver come to mind. I rarely think, "Something that smells like a bottle of Pine-Sol crossed with Brut that went out and mowed the lawn." But hey, that's me.

I suppose what shocked me was the strength of it. Holy hell, it was having the membranes of my nasal passages seared off. There used to be an elderly jeweler in town that had been in the same store for at least 75 years. He had a weakness for stray cats, and used to bring them into the shop overnight when it was cold. By morning, the shop needed a bit of, "Freshening-up" so he'd spray some awful cologne around the place so that it smelled like pine and cat piss. I couldn't stand being in there more than a few minutes to drop off/pick up repairs because my eyes would sting, and my throat would start to itch. I always blamed the cats, but hindsight being what it is, I'm sure it was the cologne. I don't think it was Worth pour Homme, but it might as well have been.

After the initial, "Oh my god what have I done?!" impression, the dry down gets a bit more interesting. Where all I can smell at first is pine, cedar, lavender, pine, pine, and pine-about an hour in, the pine shifts a bit and lets in some bergamot, leather, and that synthetic coumarin so beloved of men's colognes. Still fougere, but less household cleaner/grease solvent, though that is still there if somewhat reduced. I'm wondering if Worth pour Homme might be good for cleaning engine parts, or as a paint remover. I like a multi-use product, remember that shampoo you could also use as a body wash? It was great, one bottle to knock over in the shower instead of two.

Worth pour Homme has staying power. This is a fragrance you're going to be living with several hours after you apply it. You can't wash it off, or make it stop, so I'd suggest planning ahead because this is the purple microdot of the fragrance world-you'll think it is over...it isn't over...you just want it to be over...the headache kicks in...what the hell? This was supposed to be fun. This isn't fun. I thought it already peaked? AGAIN?...Will this EVER end...? You're going to feel like absolute shit the next day, and remain convinced it was laced with strychnine or speed,  something equally toxic. Kids, don't take drugs, and for god's sake, don't wear too much Worth pour Homme. As former First Lady Nancy Reagan said, "Just Say No".*

I've tried envisioning Worth pour Homme in the era it was born. Would this have come across better in the early 30's when people smoked more and showered less? Would hair pomade and a mouthful of Sen Sen do something to mute the aggressive qualities of Worth pour Homme? Would Cary Grant wear it? I'm doubtful, but sometimes when I encounter something so completely unappealing, I have to assume I'm experiencing it out of context. Tastes change-the super-clean, fruity scents of today would have been unimaginable just a generation ago. My chypre is your gourmand.

Ultimately, Worth pour Homme is not for me although Danny indicated he wouldn't mind having the bottle if I intend to banish it. With a promise to avoid wearing it when motoring together (or in otherwise close quarters) I may permit him to have it. He's partial to Old Spice, which came as a relief knowing what most tween males douse themselves in these days (Axe, anyone?) and has Musingwear Penguin which is pleasant enough in an apple cider sort of way. I know that I can't wear Worth pour Homme, but the question becomes whether I can live with someone wearing Worth pour Homme. At worst, we can use it to clean the engine mounts in the car.

All I smell is pine and lavender. I get no spice whatsoever, and if there's oakmoss in there, it is hiding really well.

* When Nancy Reagan visited the town where I went to school, they selected a local teenager to meet with her for a media thing at the local library. I'm not sure how they arrived at the teenager they did as he was a rather poor choice for a "Don't do drugs" message, as he had for years gone by the moniker, "Lude Face."  1980 was such a simpler time before the Internet and extensive background checks.

I do wonder if many of the perfumes from the 29's 30's & 40's were so were so strong not only to compete with the scent of less washed clothing, hair, & bodies but rather to make a less than subtle statement of "I'm wearing fancy, expensive cologne & I want everyone to damned well know I got my $'s worth," sort of practicality.
Covering one stench with an even bigger stench is still very much in vogue in India.
From cheap attar to some rather potent incense, when you get it all going together with the ambient all pervasive 'odours' around here of cow poop, diesel exhaust, burning trash, stale human urine, coal smoke, fly ash, fried spices, burnt onions, old sweat, homemade yoghurt & the ubiquitous khaki dust- ZOWIE!!!!
It's all bit overwhelming sensorily to the 1st world palate.

*Whispers* I quite like Old Spice - the husbeast bought a bottle 'cos I like it. Though I think I shall avoid buying him any Worth Pour Homme, after your writeup. It sounds like the blokey equivalent of Angel.

I'm wearing Madame Rochas today, one that I don't think would get released at all nowadays. It's so much of its time.

Gad, what memories you've invoked with the mention of Pine-Sol! As a child visiting an elderly relative, I approached the inevitable trip to her loo with caution. There was this tall square bottle of piney stuff parked on the floor beneath the toilet tank. From the bottle there emerged a sort of fabric brush on a wire that served as a scent wick. Once upon a time an unfortunate child ventured to examine the wick mechanism and upset the goop. * There are no more unforgivable or unforgettable accidents than saturating an ancient tile on wood floor with piney freshness.

ten years + of farm living made burning garbage, cattle, and mouldy hay something I hardly noticed. Two years away from it and I don't think I could bear it for twenty minutes (everyone thinks country living is so clean. It isn't, and I won't even start on the toxic run-off from pesticides).

@Mim
Madame Rochas is on my "to buy" list, though I haven't loved many of their perfumes. I've heard so many great things about it.

@Beth Waltz
As the kids say, "Oh no, you didn't!"
Could have been worse though, you might have found her mini-bottle of smelling salts ;)