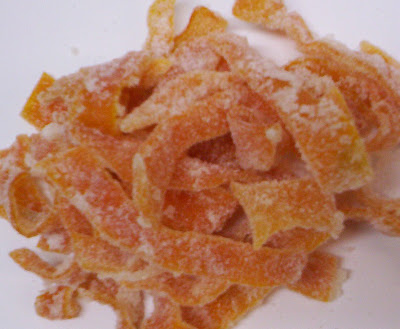 I've been watching Mr. Eat The Blog tossing out orange peel for weeks now, and I couldn't bear it any longer-so I candied them. The pile there comes from four oranges, trimmed of ragged edges. I have no idea what I'll do with them. I suppose they can be eaten as-is, or dipped in chocolate. I wonder how a handful would do chopped-up in a challah?

This was so quick and easy I did it while dinner was cooking on another burner.

We're in the throes of an ice-storm with a predicted 8 inches of snow to follow (Midwest living-yay!) so there's a good chance we will lose power and be off the Internet for a while. At least we'll have candied orange peels to sustain us.

Make a simple syrup by boiling together the water and sugar. Reduce to medium heat and add the orange peels. Cook until they are translucent. Remove a few at a time and toss in a bowl with extra sugar to coat. Remove with a fork and let dry on a rack. Store in an airtight container until they begin growing mould (at which point you should probably toss them out, but if you're my mother you get out a knife and start scraping).
Posted by Goody at 6:15 PM
Labels: Blood Oranges, Candy, Holiday Fare

My Mum used to make candied peel at Christmas when I was young(er). I'd love to try some time, but I find candy of any sort rather intimidating. I think I'll be sticking to sugar cookies and bread.

(My Word Verification was hessests - sounds sort of like some heretical religious cult, don't you think?)