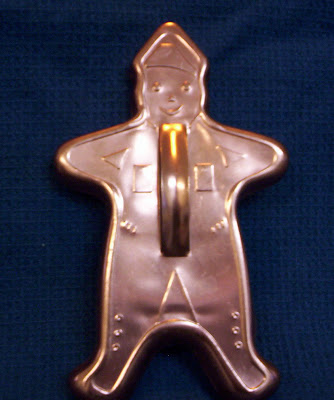 With a title like that, you know it is going to be another installment in Goody's Holiday Memories (tm). If you just want the gingerbread recipe, skip to the bottom.

The last year that my mother was alive she discovered a line of drink mixes that had the alcohol already in it. While that might elicit a "yuck" from many people, my mother considered this to be one of the Twentieth Century's greatest inventions-I mean, right up there with the Xerox machine. Mind you, she was diabetic and had no business drinking, much less drinking pre-mixed Pina Coloda mix, but she did and she loved it. As I recall it had a pretty low alcohol content so you'd have to drink quite a bit of it to get drunk, but it still had a bit of kick. I think my mother liked it because it was a drink without really "drinking." You know, more of a weak cocktail. No one would have said a word if she wanted to swill straight gin from a bottle in the freezer (oh what, like you never do that?) but to people of her generation a mixed drink was "nicer." Anyway, the bottle of pina coloda mix had a place of honour in the door of the fridge.

Christmastime rolled around and my mother suddenly gets weepy and expresses a desire to bake Christmas cookies with me. I was about to graduate from my undergrad studies and she suddenly realised we'd never baked cookies together.
"You're going to graduate and move away and I'll never see you again." she complained a bit more emotionally than I would have expected from her. I tried to reassure her I would still be around, but finally she blurted out:
"You're going to end up like the Rockefeller boy."

Oh. Um. Well, she'd managed to avoid saying it the four years I'd been pursuing an anthropology degree but at last she'd uttered her great fear that I'd be eaten by cannibals and we'd never have baked so much as a tray of cookies together. Much as I promised never to go to New Guinea, she still wanted to bake the cookies, so we got out the cookbook and mixed up a batch of gingerbread. This is a great time to take a break for a joke:

Right. So we might have had a few glasses of the pina coloda mix at that point, and my mother brings out the beautiful copper cookie cutter pictured above. I'd never seen it, and she couldn't remember where it came from, but there it was just waiting to make cookies. I tossed the chilled hunk of gingerbread dough on the table and realised I couldn't roll it. I mean, even warmed up, the thing wouldn't budge. How she ever worked that much flour into it without busting the gears of the mixer I'll never know, but that mass of dough wasn't going to be rolled out by the force of either of our upper-body strength. I think we managed to do two or three before finally giving up. The kitchen was covered in flour, there was a sink filled with dishes and we were running low on pina coloda mix. I sat at her kitchen table for a minute before taking a good look at the cookie cutter.

My mother wasn't exactly dour, but she also didn't fall apart laughing much-until the day she decided to bake cookies. We never did figure out why the gingerbread man was a pinhead, or where she found it to begin with, but it was the last Christmas I spent with my mother and I'm glad I'm able to remember her having fun. By spring she was gone. I suppose she'd be pleased to know I use the pinhead gingerbread man every year now to amuse her grandson and that thankfully (at least, so far) I haven't been eaten by cannibals.

You Will Need:
(modified from the Betty Crocker Picture Cookbook)

Mix together the shortening, brown sugar, and molasses. Stir in the cold water/ Sift together dry ingredients and add to the first mixture. Stir in the baking soda and water. Mix well and chill, several hours.

The dough will be sticky, so use enough flour to keep it from sticking but not so much that it makes the cookies tough. Roll them out very thick (about 1/2 inch). Bake in a 350 oven for about fifteen minutes. Cool on pan two minutes, then remove to a rack. Makes about a dozen.
Posted by Goody at 12:46 PM
Labels: Family Memories, Holiday Fare