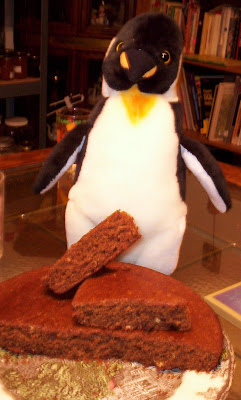 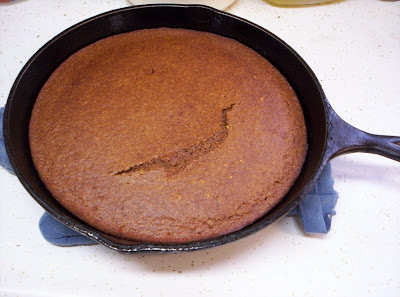 You bad penguin! Get out of here, I don't have any herring for you.

No silly, I didn't burn it-it has 1/2 a cup of molasses baked in. I wanted a small batch cornbread (unlike my regular recipe that feeds an army) and this one sounded interesting. I liked that it called for exactly as much buttermilk as I had sitting in the fridge waiting to be used, and the smaller amount of butter also appealed.

This is fantastic corn bread. I served it with a hearty three bean vegetarian chili and half the bread is gone. Danny had better get up early if he's going to have any for breakfast. I made mine in a cast iron pan, but an 8 inch square pan will also work.

Preheat the oven to 425 degrees F. Grease a cast iron skillet or an 8 inch square pan. Sift the corn meal, flour, salt and baking soda into a bowl. Add remaining ingredients and stir just until blended. Pour into prepared pan and bake fifteen to twenty minutes (mine was done at about thirteen minutes, so watch it). Aprox. six servings.
Posted by Goody at 5:10 PM
Labels: Bread, cornmeal, Quick Bread