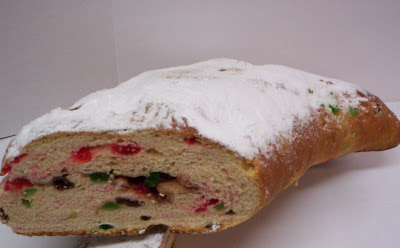 I used a different stollen recipe this year and it came out lovely. Due to nut allergies, I omitted the almonds and marzipan coating (does anyone really like marzipan anyway?) and added extra fruit. The basic recipe came from the Women's day Encyclopedia Of Cookery, 1966 but I made so many changes as I went that it can hardly be called the same. Most breads of this sort take well to changes so if you hate glaceed cherries, or citron (or marzipan) you should feel free to experiment. Most people suggest staying within the amounts for fruit when making substitutions but heck, it's Christmas-if ever there was a time for an extra handful of currants, this is it.

The original called for a gooey icing to be poured over, but being a traditionalist, I decided stollen does best rubbed with a stick of butter fresh from the oven and dusted generously with confectioner's sugar. If you like the glaze, feel free to pour it on.

In the warm water, dissolve the yeast and let stand until foamy.

Scald the milk and pour in a large bowl over the 2 tablespoons butter, 4 tablespoons sugar, and salt. Cool to lukewarm. Stir in 1 cup of the flour. Add the egg and beat well. Add the yeast and mix well again. Stir in the candied and dried fruit (this recipe does not have you work it in after) and add enough flour to make a dough that is no longer sticky. Remove from bowl and knead well. The cherries will break up a bit and give the dough a pink-ish colour which looks lovely when baked.

Place dough in a buttered bowl and let rise until doubled (this took about 2 hours in my cold kitchen). Punch dough down and let it rest ten minutes.

Roll out dough into an oblong. Spread one half with remaining tablespoon of butter and sprinkle with sugar and cinnamon. Fold the dough over and pinch closed. Turn ends in slightly to form a crescent. Place on a buttered baking sheet, cover and let rise again until doubled (about 1 1/2 hours.

Bake in centre rack position for 30-40 minutes or until dough i well browned and sounds hollow when rapped.

Remove to a rack over a baking sheet and rub surface generously with butter while still hot. Then, layer confectioner's sugar thickly (I find a small sieve works well to get it even) and let cool uncovered.

The best way to store this is very loosely wrapped in waxed paper so that the sugar does not melt-but it must be completely cool before doing so.

Serve warm or cold (with apple jelly if you have it).

Stollen goes dry (not stale) quickly, but that does not really matter-it will still be wonderful lightly toasted in a week (if it lasts that long).
Posted by Goody at 7:34 AM
Labels: Bread, Christmas, Dried Fruit, German

Thank you for the nut-free Christmas stollen recipe! Actually marzipan is one of my favorites! I also truly enjoy any recipe using almond paste. There is a famous recipe I've made for years at Christmas called Almond Raspberry Gems from a cookbook that was hot about 10 years back. And the almond paste adds a rich, moist, chewy texture and fine almond flavor. I also love to put almond extract instead of vanilla into my Rice Krispie Treats to add a depth fo flavor! So yes, MANY people love the marzipan in the recipe, but due to nut allergies of a relative in the family make a nut-free version. In fact, in Germany they make fine little animals and fruits out of marzipan and sugar and paint on all the colors! Very cute and tasty!