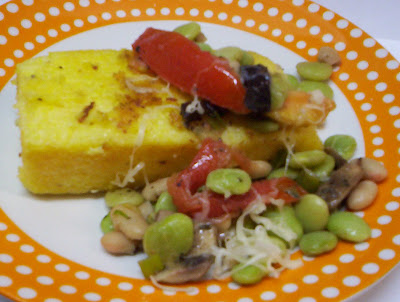 We do love lima beans in this family. All sorts really. Dried, frozen, Fordhook-doesn't matter, we love 'em all. We're also pretty partial to polenta (say that three times quickly). Most of all, we like recipes that will provide a few day's eating for an hour or so of cooking.

Now really, this isn't succotash proper. It does have polenta (corn) and lima beans but I doubt preserved lemon peel and Kalamata olives make too many appearances in the traditional foods of indigenous North Americans. I mean, sure they had trade with other groups, but not Greeks and North Africans (even Hyerdhal wouldn't try claiming that degree of oceanic contact..he was such a fun nutjob, I really kind of miss him. You had the Kon Tiki book too, didn't you? They gave it away free if you joined Book Of The Month Club, so I pestered my mother to join and then she bought a bunch of Graham Greene novels that were kind of boring and moralising. She bought me a nice translation of The Iliad as well, but really, I just wanted the freaking Easter Island via raft adventure book. I'm off topic again, aren't I?). I know this about the trans oceanic contacts of indigenous North Americans not extending to North Africa because I have an Anthropology degree. They teach you this stuff. Yeah, I'm a physical anthropologist-but I still had to sit through the cultural anthro classes. Ask me about Trobriand cricket-or not. We could just talk about food. OK, let's talk about food.

I know what you're thinking (other than, "Gosh, she's blathering worse than usual-can't she just get to the freaking recipe?" because hell, that's a given). You're thinking polenta is time consuming to make and difficult because it requires constant stirring. Know what? Half an hour-that's it. And unlike risotto, the end result is actually worth the bother. Here's what you do-get yourself a very long wooden spoon-something like an 18 inch length. This will save you getting splattered with hot corn mush, as well as give you some room to reach the cup of coffee you set down on the counter. Then, you're going to want a good, heavy pot. I use an enamel over cast iron dutch oven that has been taking a beating for twenty years and nothing sticks to it. Seriously, I don't know how I ever lived without that pot, but i wouldn't give it up for the world. So get your long spoon and fancy French pot and start making the polenta. You can even make it a day ahead. You really need to keep it moving, particularly toward the end, but the recipe makes quite a bit. When it is cool, cut it in half, wrap tightly in plastic wrap and you'll have it ready to go for a couple meals.

Bring water and salt to a boil in a large pot. Add the polenta slowly and reduce to a slow simmer. Continue stirring until thickened-about 30 minutes. remove from heat, beat in butter with a spoon and pour into a buttered baking dish (glass or porcelain work best 8x10 is a good side). Let stand 10 minutes, then unmould onto a platter. Let cool, before wrapping tightly in cling wrap and keep refrigerated until ready to use.

Place a small amount of olive oil (about a tablespoon and a half) in a frying pan (cast iron works best). Fry over medium heat, watching that the oil does not begin smoking (just lower the heat if it does. Pressing gently on the polenta, fry until browned on both sides. Meanwhile, make the beans.

For The Lima Beans:

1 small bag frozen lima beans, blanched in boiling water, then drained and refreshed under cold water.
I bunch scallions, chopped fine
1 cup chopped mushrooms
1 small tomato, seeded and cut into eighths (but you can cut them any way you like because heck, I don't want to be a bummer if you live to dice tomatoes. No need to obsess over a detail like that)
1 tin cannelini beans, rinsed and drained
About eight Kalamata olives, chopped fine
1 teaspoon preserved lemon peel, chopped fine (a little goes a long way)
1 teaspoon dried thyme
2 teaspoons dried basil
Black pepper to taste
Olive oil for cooking
Provolone cheese, grated

In a large frying pan, cook the onions and mushrooms in about 2 tablespoons of olive oil until mushrooms have given off some of their moisture. Add the lima beans, olives and lemon peel. Add the spices and additional olive oil if it seems to be absorbing too much. In the last few minutes add the tomatoes and cannelini beans. Cook until warmed through. Serve over fried polenta with provolone cheese grated over.
Posted by Goody at 6:15 PM
Labels: Corn, Italian, Lima Beans, Polenta, The Magical Fruit