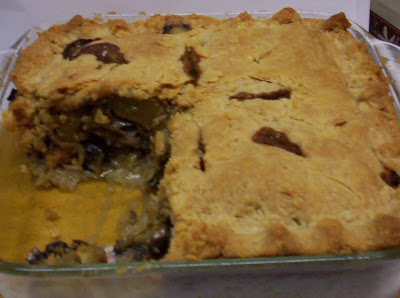 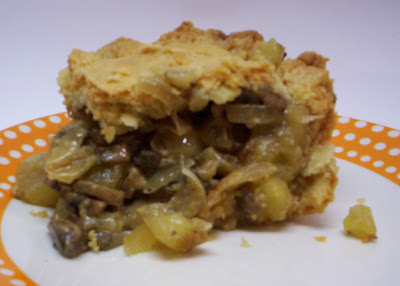 This is a very rich dish and would be best as a side, not a main (though I'm sure that won't stop Mr. Eat The Blog from eating a couple slices). Warm or cold, it is a nice way of dealing with an abundance of mushrooms and potatoes.

2 pounds mushrooms, chopped (use the stems too) I used regular old button mushrooms.

2 large onions, cut in half and thinly sliced

In a small pot, boil the potatoes until soft, drain and set aside.

In a large frying pan, heat the butter and 2 tablespoons of the olive oil over medium heat and cook the mushrooms. After a few minutes, add the sage and thyme. Add the salt and pepper. Continue cooking until they have given off their liquid and then increase the heat to reduce it. Add the sherry and blast the heat for a minute or so, or until it is burned off. Remove from heat, stir in the cream, and then return to low heat for a few minutes until the cream is heated through. Remove from heat, cover and set aside.

While mushrooms are cooking, cook the onions in a frying pan or large pot in the olive oil until very soft. Add the potatoes.

Preheat the oven to 350 degrees F. prepare the pastry and line either a 9-inch pie plate, or an 8-inch square pan. Combine the mushroom mixture with the potatoes and stir in the cheese. Mix well. Pour into piecrust and then top and seal edges. Vent generously in a few places. Bake about an hour or until golden. Let stand 10 minutes before cutting.