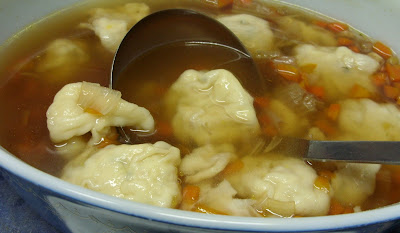 A Kreplach is just the Yiddish word for dumpling. Were I forced to compare them to something, I would say they are similar to a Won Ton, without the pork filling, of course.

Typically, these would be filled with ground beef. I thought about using a vegetarian meat substitute, but decided to go in another direction and used chick peas instead. I can say that we are all really pleased with the results. Mr. Eat The Blog rarely makes a point of complimenting my cooking, but kept telling me how much he liked the soup. Danny finished his bowl as well.

The recipe made quite a bit of filling. You may wish to do a double batch of the dough, and freeze some uncooked kreplach. The extra filling would also be delicious as a layer in a vegetarian lasagna.

I a large pan, cook the onion and garlic in the oil until they begin to brown. Add the chickpeas, spices and parsley. Add more oil if too dry, and mash in the pan with a wooden spoon. Mix well. Cook a few minutes for flavours to combine and remove from heat. Transfer to a bowl and let cool.

When cooled, add the eggs and mix well. At this point, add the breadcrumbs. You want the mixture to be the consistency of a meatball, or hamburger patty. That sounds impossible with chickpeas, but really, you just want it to hold together without being too mushy wet, or too dry. Don't obsess over it, in the end a little too dry, or a bit too wet won't matter as it is going in a dumpling. I won't tell.

Keep the mixture cooled until you need it.

for a single batch:

Beat the egg yolks and water together until well mixed. Add the salt and the flour, a half cup at a time until most of it has been incorporated. Then, knead it until smooth, adding more flour as needed. You really want this to be smooth, so give the dough a good five minutes of serious kneading. Then wrap in cling film and let rest ten minutes.

If you have a pasta machine, use it. Otherwise, get out your heaviest rolling pin and start rolling. The dough really should be as paper-thin as you can get it, with as little additional flour used on the rolling surface as possible. Cut the dough into 3 inch squares. Place a small bit of filling in the centre and fold over into a triangle. Pinch the edges closed, then bring the three corners up and together and pinch them sealed. It should look like a little bundle. Place them on a baking sheet lined with wax paper as you work and start boiling a large pot of water. When kreplach are made, place them in boiling water and reduce heat to a not-quite rolling boil (you don't want them to break). Boil about 15-20 minutes or until tender. Gently remove with a slotted spoon and drain before adding to already hot soup.
Posted by Goody at 5:26 PM
Labels: Chickpeas/Garbanzo Beans, Dumplings, Jewish food, Kreplach, Meatless, vegetarian

mmm... I could totally go for a bowlful of that for breakfast. Sounds perfect!

(PS: verification word for this post is "artism." Why isn't that an actual word? It should be. Artism.)

"Artism Spectrum Disorder"
Def: You get a humanities degree, and get an MFA even though you understand the pointlessness of it...and you do it with great enthusiasm.