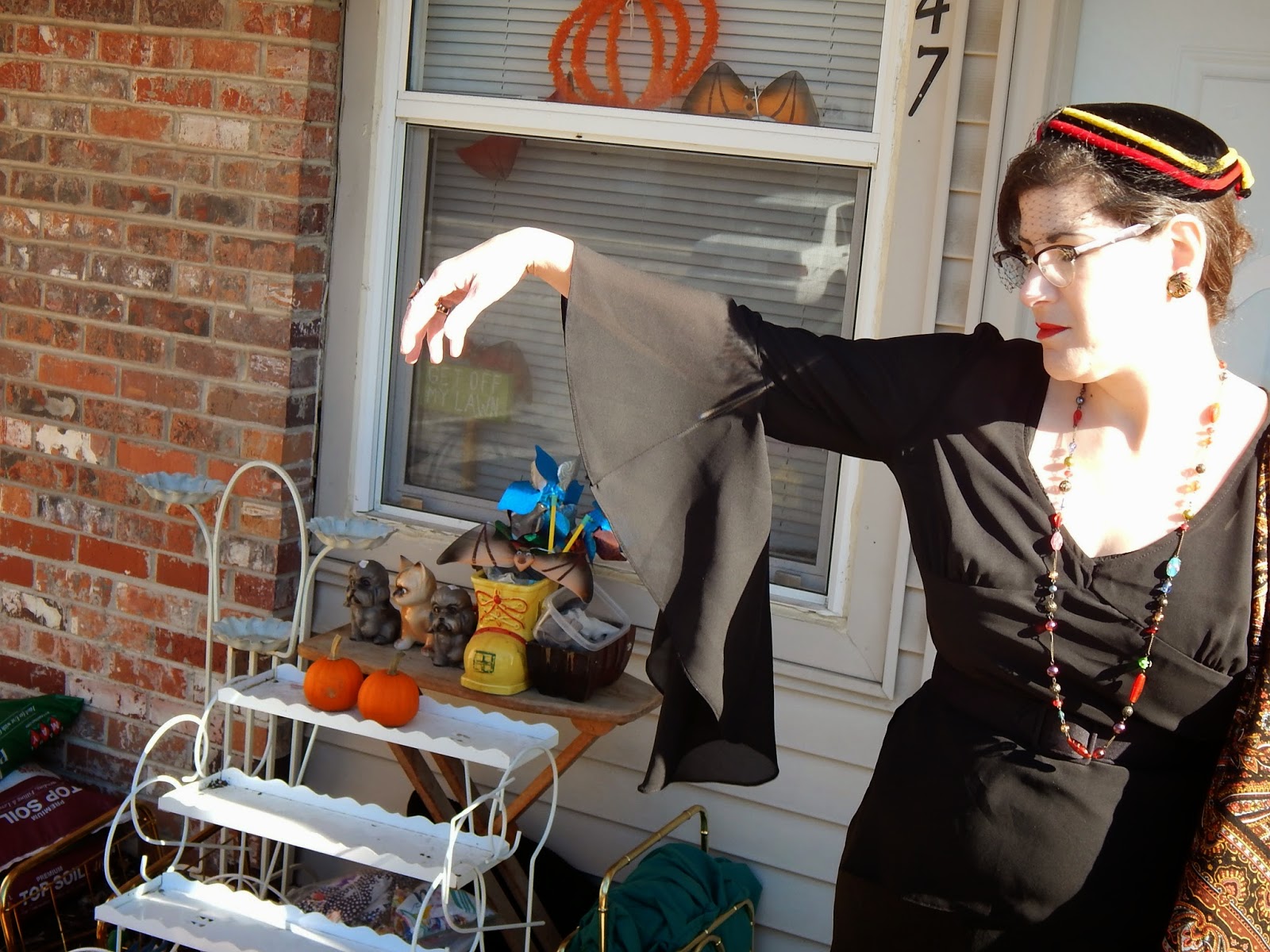 Not the most practical of sleeves, particularly if you need to use the ladies room. It does make you wonder how women managed sleeves like this in the 30's. You can only flip them up so far. Poor Jean Harlow with the sleeves of her gowns going for a dip in the toilet! This blouse isn't 30's, but the slip dress beneath it is. Cut on the bias, I kept feeling like I was twisted around sideways in my dress, and then I'd remember and be like, "Oh, that's the cut" and then I'd mutter something about Jean Harlow's sleeves smelling of piss. Some styles I just can't get close to comfortable in. 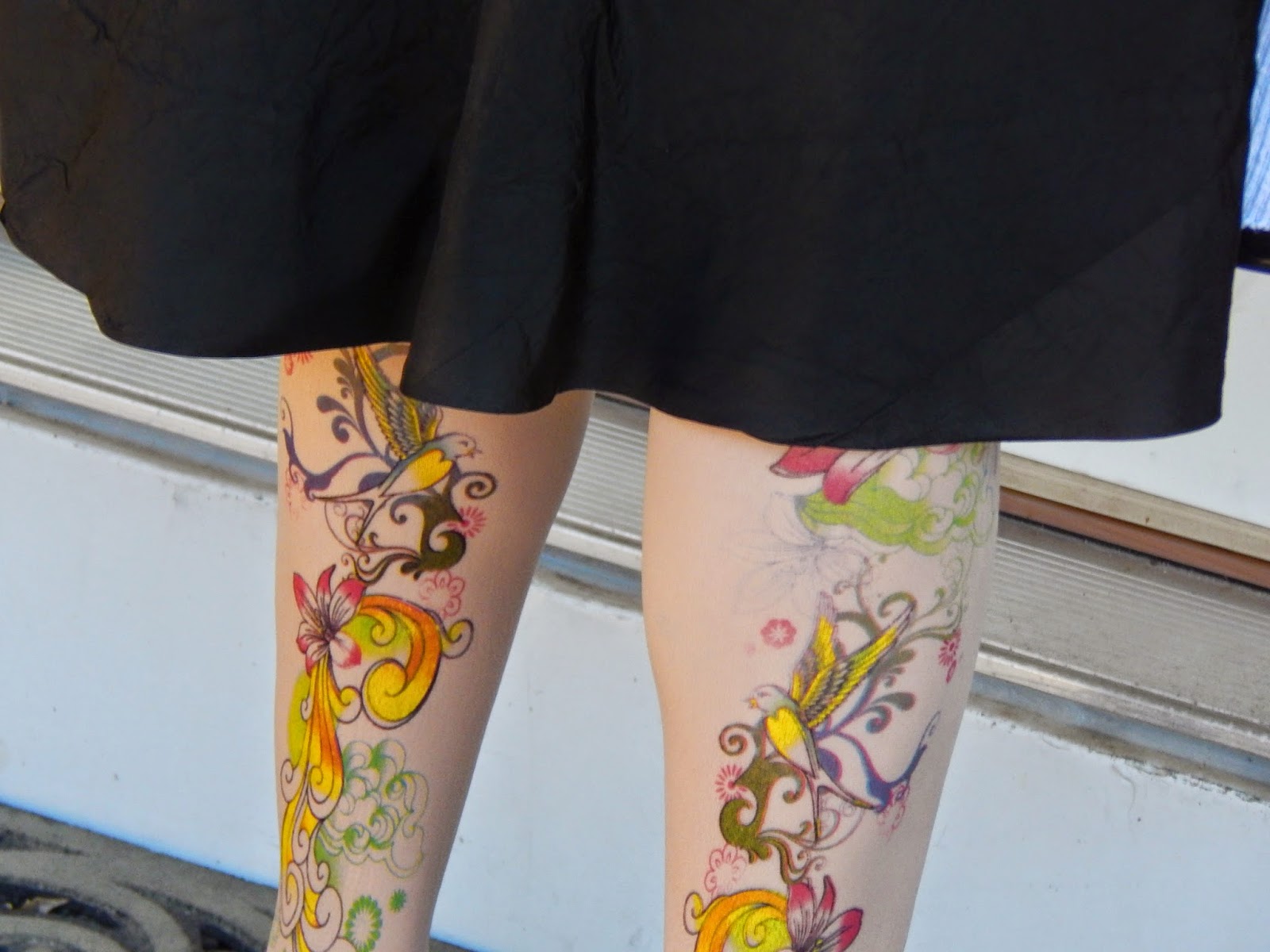 To keep it from looking too authentic, I wore my tattoo tights. That got some looks. 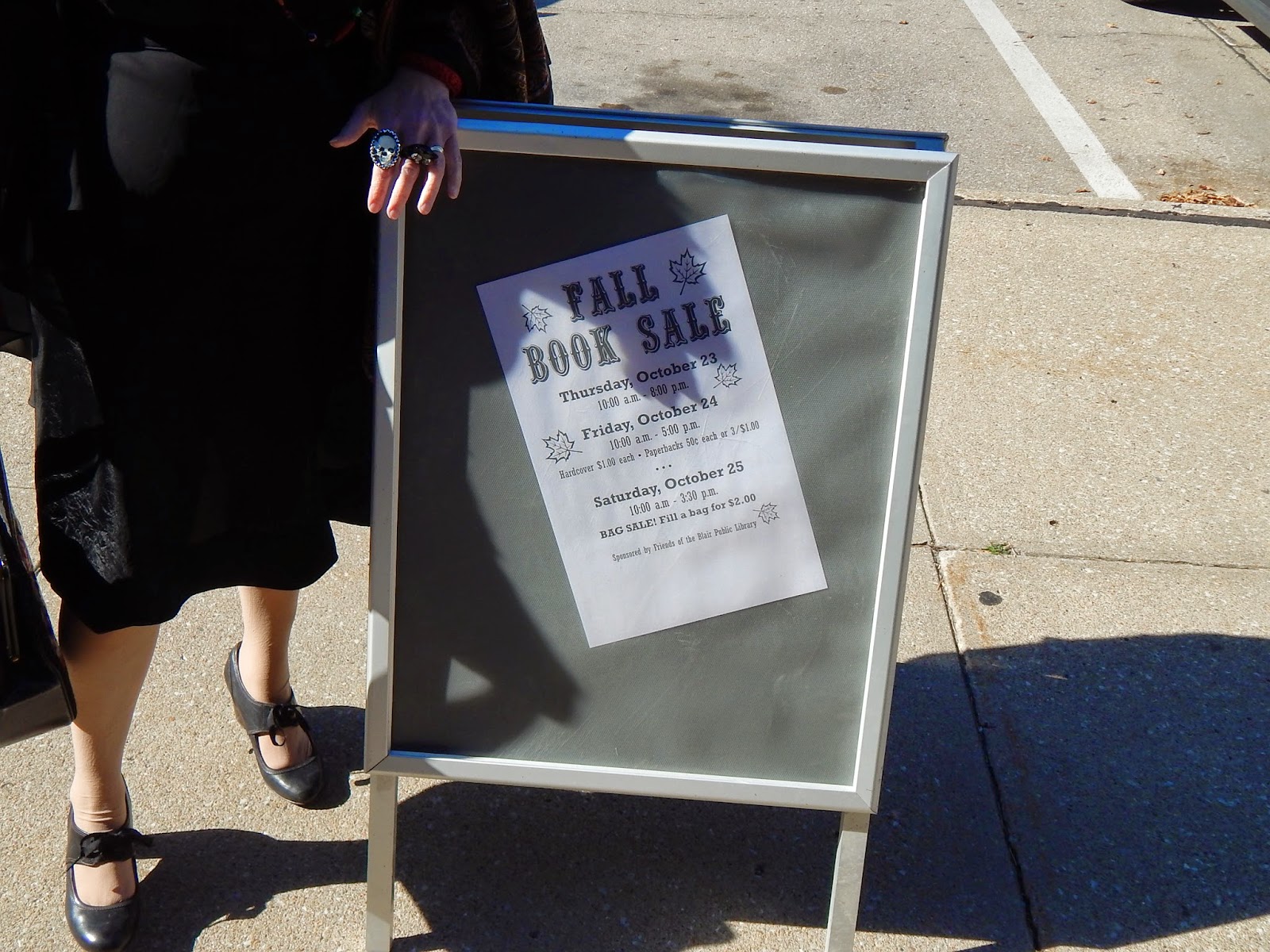 Today was the big book sale in Blair, Nebraska. We filled two large boxes for $5.00 each. It was a very good book sale. They also had several boxes of books from the library of the now defunct Dana College in Blair. Most of them were antique-I saw 18th century bindings on some of them, however, they were all in Danish (as in Dana College). As I don't speak Danish or have any way to assess the books beyond their bindings and those I could tell were obviously hymnals, I passed them by hoping someone will want them. Unfortunately, I'm afraid they may end up with the recycling which is heartbreaking, but I just don't have the space for 100+ Danish language antiquarian books. I do hope someone gave them a good home. Sadly, none of the books had titles like, It Came From A Bog, A Really long time ago, or The Little Mermaid, the Untold Story. Or perhaps they did, but I couldn't decipher the Danish. 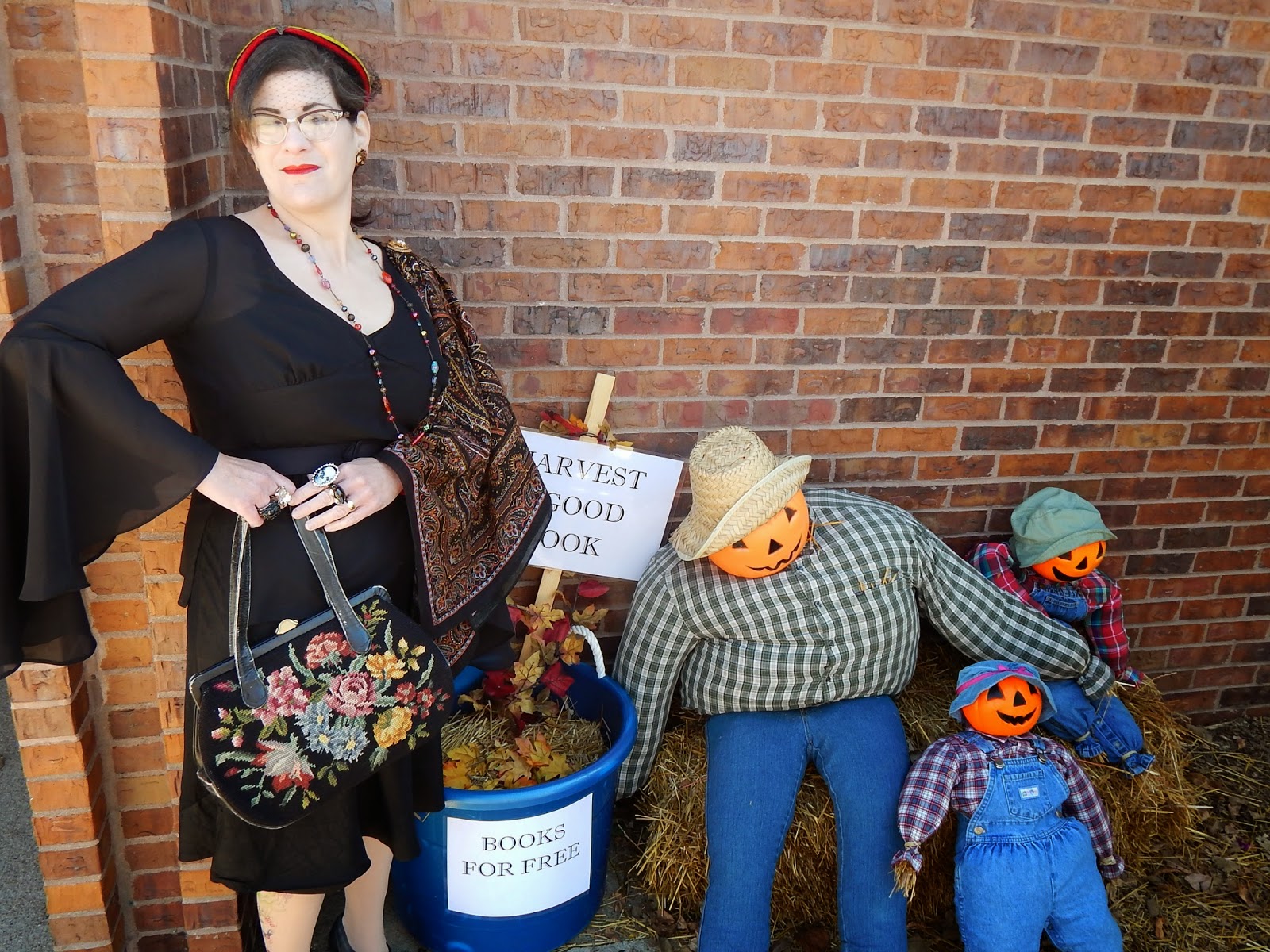 I had to peek in the card catalogue. Nothing but art supplies, but I was still happy to see one. I look good peering into a card catalogue-should have been a librarian. Shhhhhhhhh. 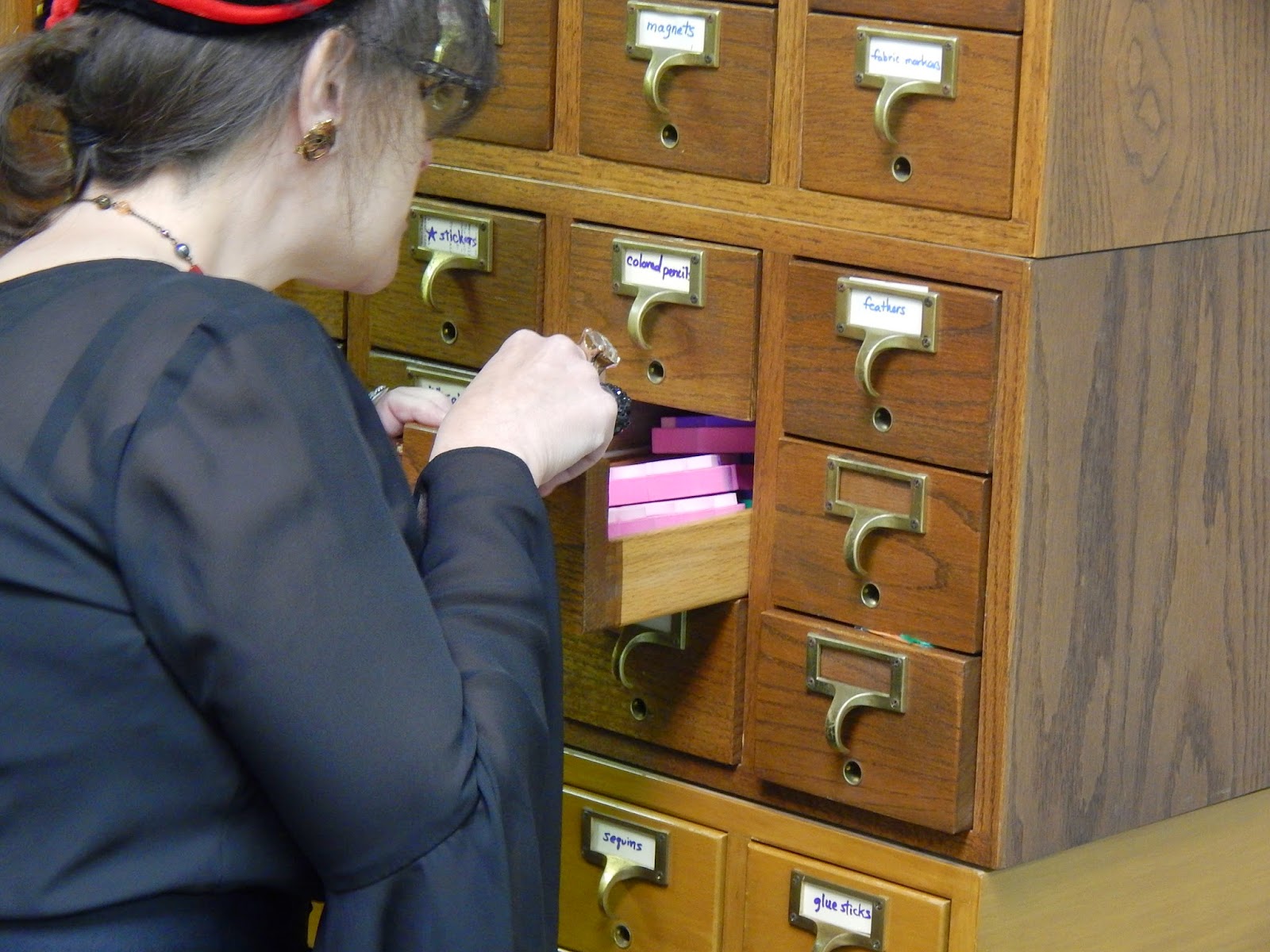 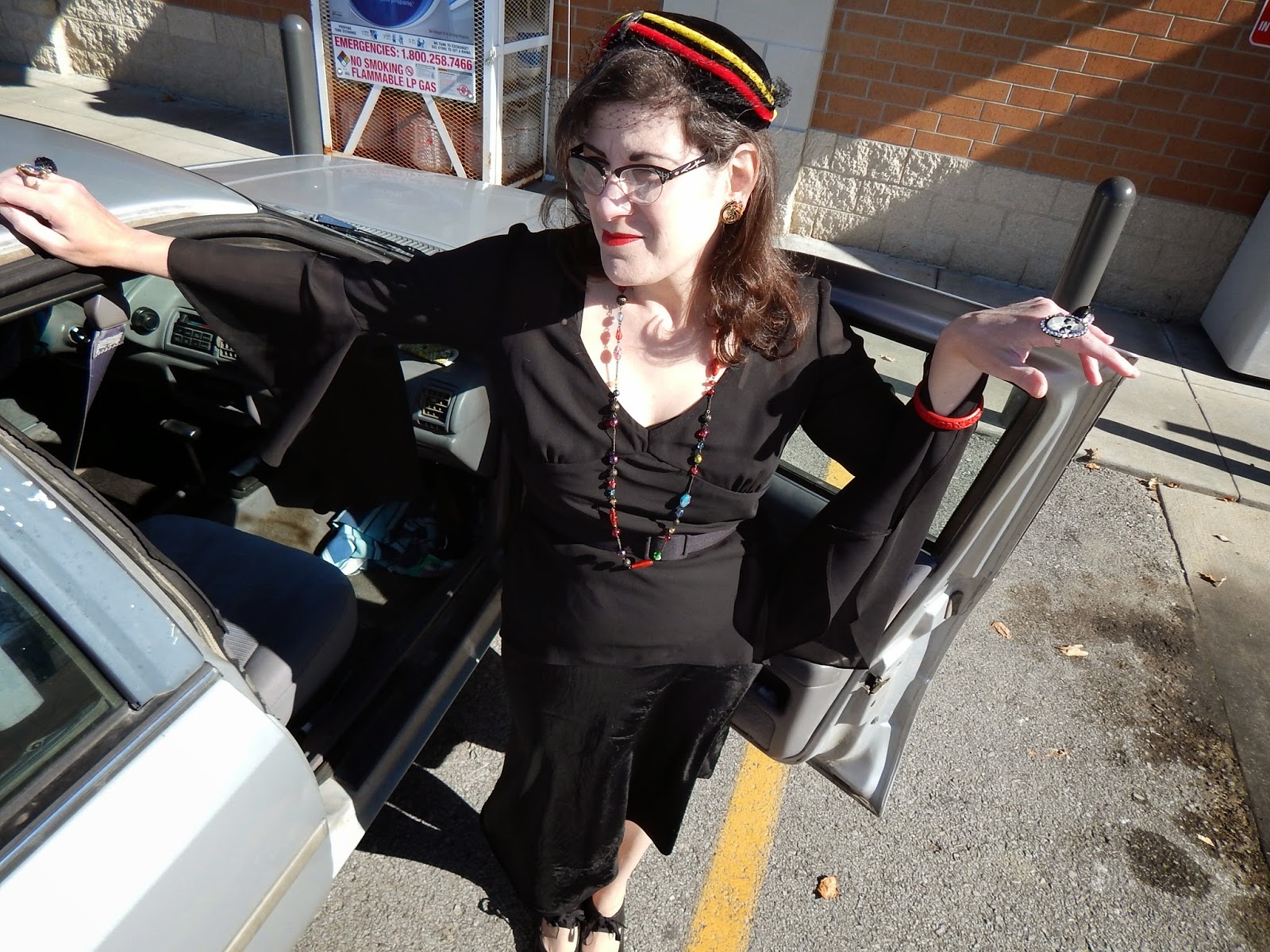 By the end of the day, that hem was completely down, which I didn't know until I got home and undressed. You'd think someone might have mentioned that. 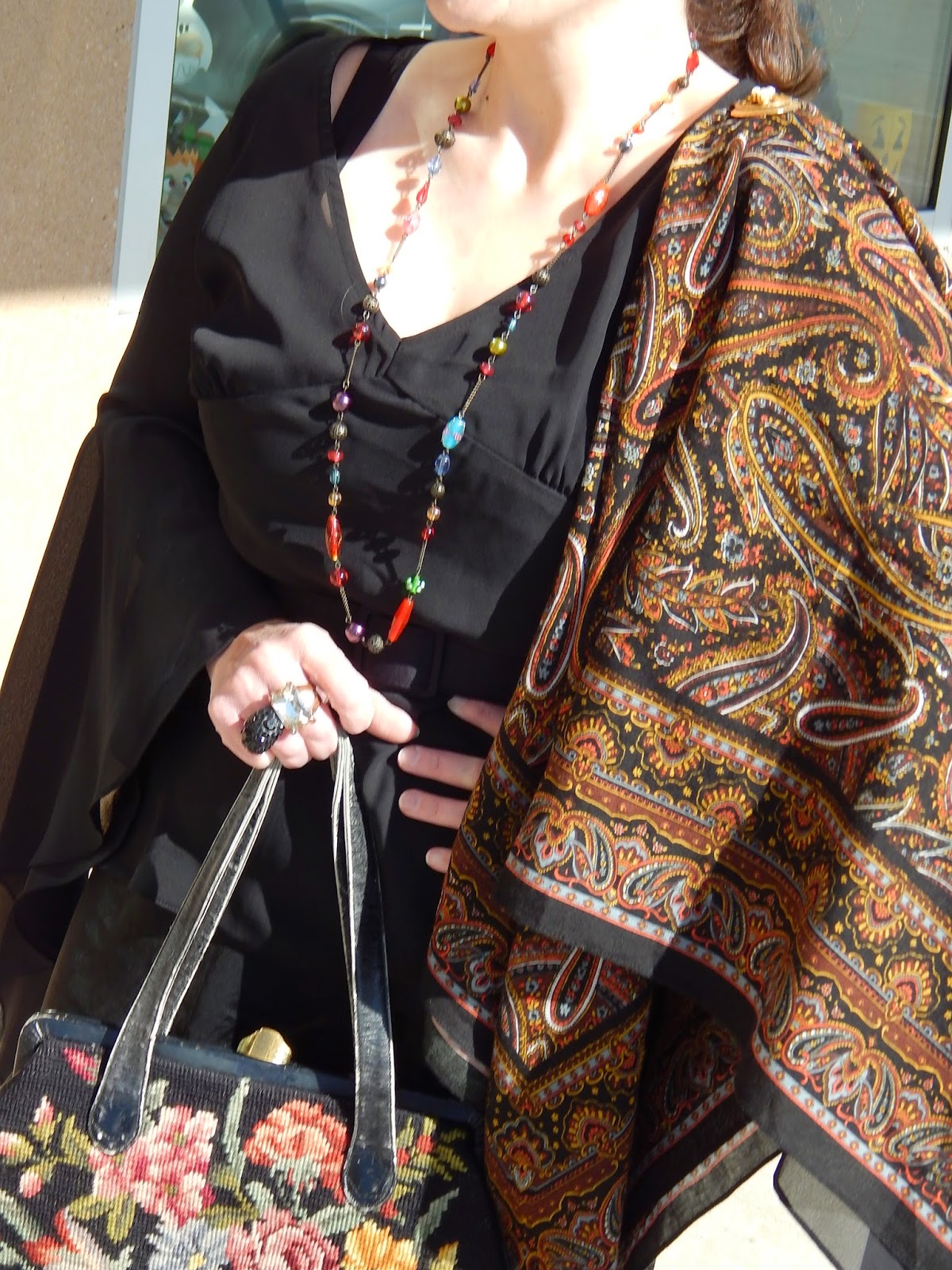 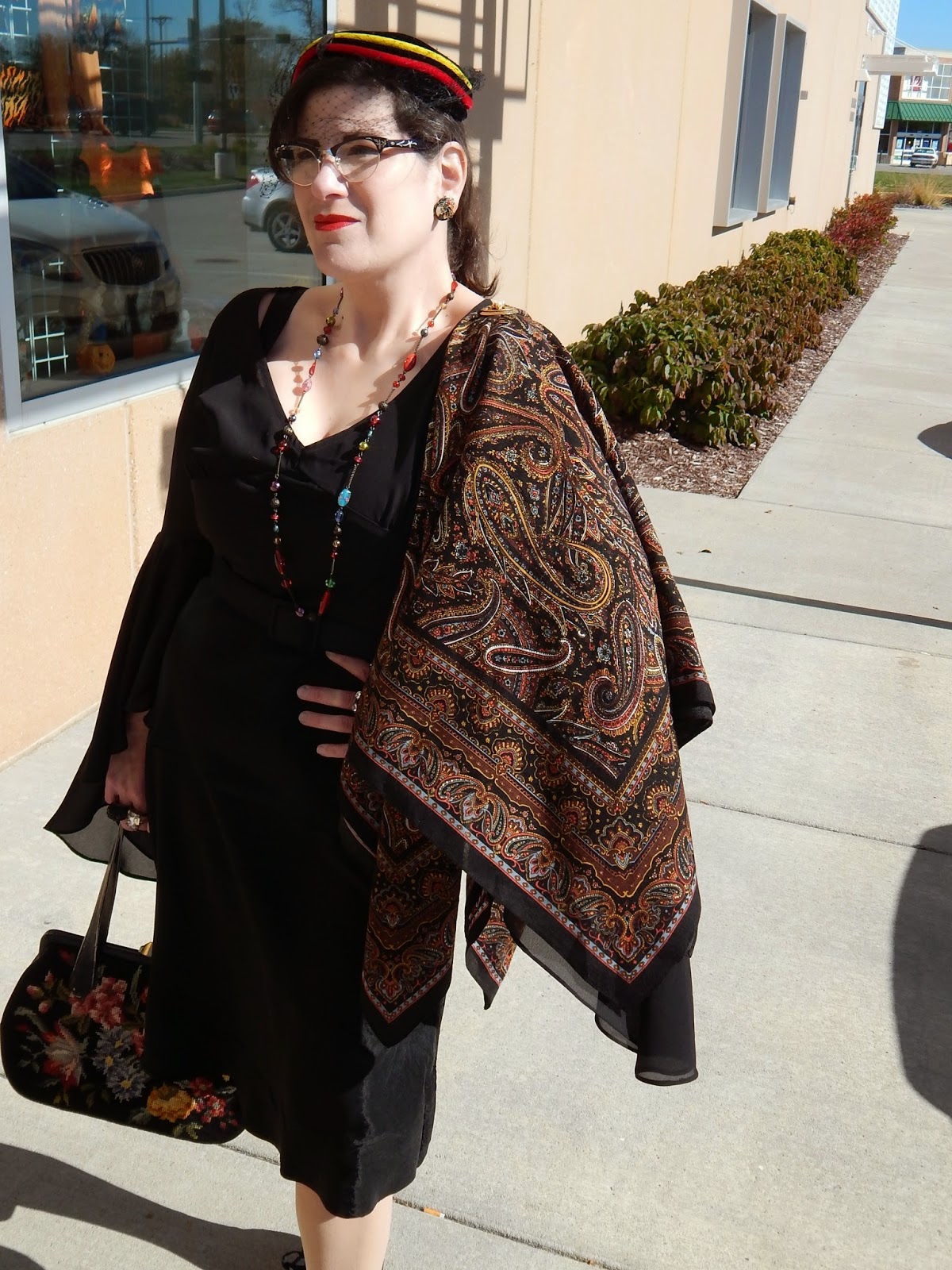 We stopped at the new Goodwill in Blair and...I bought nothing. That may be a first for me. The store was perfectly nice, they just didn't have anything I wanted. Still, it was a good day for thrift stores and libraries as there was football which meant most places were abandoned during the game. I saw some people tear themselves away from the tube at halftime, but overall it was like being in an emptied-out town. It was a home game, so maybe they all drove down to Lincoln. 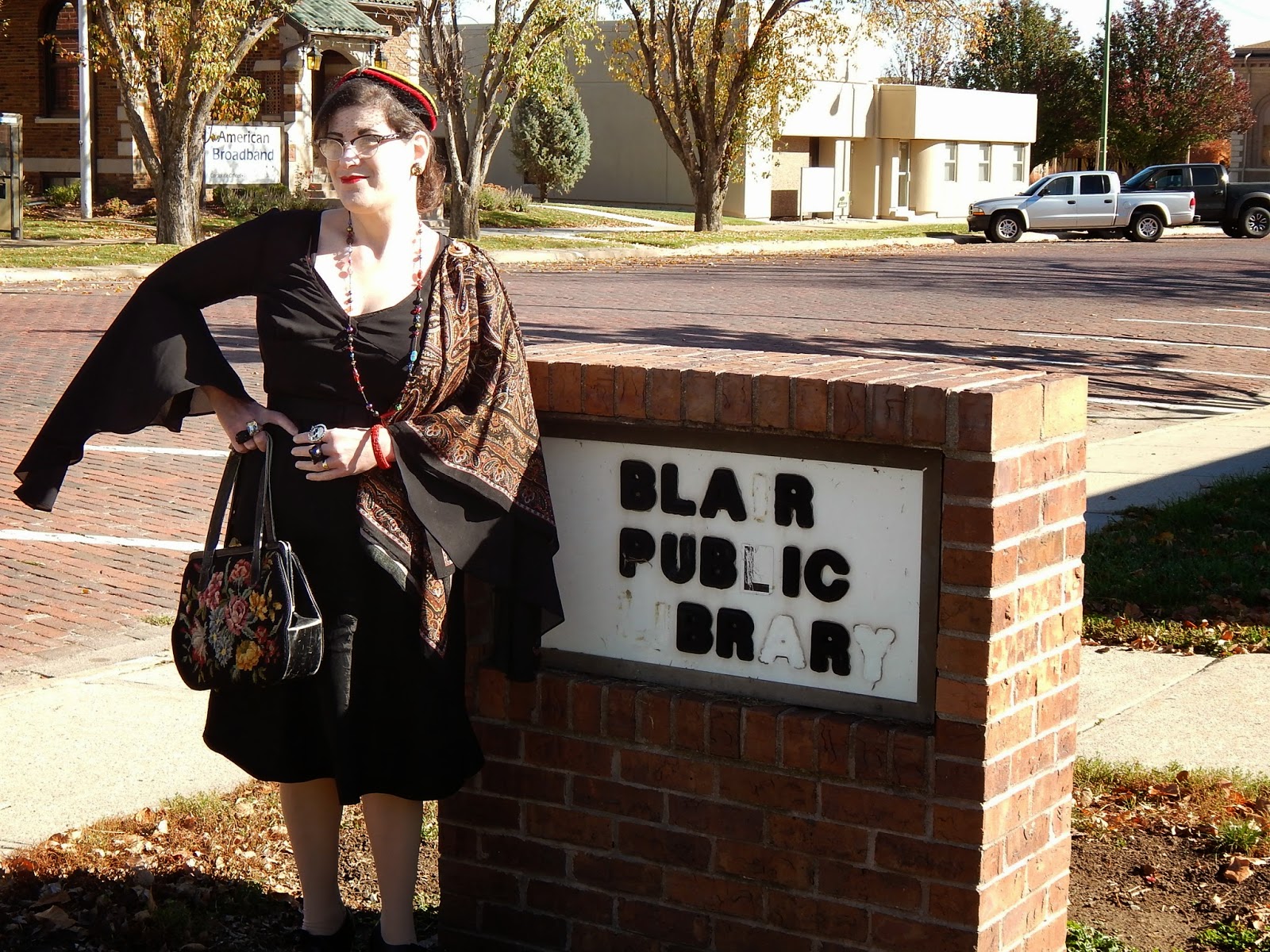 They don't need a new sign because they got themselves a brand new library. The more books we bought, the less they need to move, so we tried to be helpful by purchasing quite a few.

I  doubt the dress or hat will be making another appearance on the blog (or in my life) as they just aren't my style. I'm glad I don't live in the 30's for several reasons, and the list begins with bias cut dresses and crazy sleeves. Poor, poor Jean Harlow with her sleeves in the toilet. They blamed the hair peroxide for her death, but I'll bet she picked up some amoebic disease on her sleeves and it ate through to her brain.

For the record-I didn't use the toilet until I got home, and undressed...because I don't need a brain eating amoeba.

Your tattoo tights are so immensely lovely and cool!!! I remember when sheer sleeved tattoo tops had a mini moment about a decade ago. I always wanted, but never bought/got, one. Tights suit my vintage wardrobe even better, so perhaps I'll have to start dropping hints to Santa (hey, it's less than two months until his big night returns) for a pair.

*PS Roll the sleeves around your arm like you were giving yourself an Indian burn. Tuck the last corner of fabric until this twisted bit and then cuff the whole thing up a couple of times. They stay put very well usually this way and making using the loo, washing dishes, etc much easier.

Now, you see I love those sleeves. LOVE them. I know they aren't very practical, but oh the drama, the floaty deliciousness! I am unsure about how flattering bias cut pieces are, I think you have to size up for them to work well and not feel tight and annoying. Still, the dress was an amazing find, even if it isn't right for you.
I love a card catalogue too, and wouldn't be able to resist a little rifle through...
Good to know you found plenty of books at the sale, even if the Danish hymnals didn't make it home with you! xxx

Firstly, LOVE YOUR TIGHTS!! Phew, got that off my chest. Still laughing at poor Jean and her sleeves dangling in the lav. Some clothes just are not bathroom friendly now are they. Maybe those sleeve are strictly for prancing in.

Interesting theory about Jean Harlow. I had a bell sleeved dress in junior high and the sleeves were pretty damn disgusting after Mac n cheese day in the cafeteria. You do look very pretty though. What is it about peering into a card catalogue? I do miss it.

That is GREAT advice regarding the sleeves! Thank you.

@Curtise
I suppose wearing sleeves like these requires some sort of mysterious behaviour...but not *too* much because the evidence will be all over them.

@Connie
Mac and cheese day had me laughing so hard. I don't know what it is about those tiny files either, but the little pencils and scraps of paper get me too. I'd love to buy one to use for our home library, but I never find any reasonably priced ones online. I guess libraries just re-purpose them as they're great for storage.

Those are great sleeves but, like you, I'd always be scared of getting them in things - in my case of igniting them on the cooker. Best left for ladies who don't do much, I guess!

In one of Laurie Colwin's stories, she describes a dinner party hostess who wears a dress with bat sleeves. When it's time to carve the ducks, she rolls up her sleeves and secures them with large hat pins, one topped with coral and one with amber. "Whenever the thought of Vera kept Billy up at night, she usually appeared in her black dress about to carve the ducks with the hat pins through her sleeves."

That would be my husband's idea of a romantic image too.