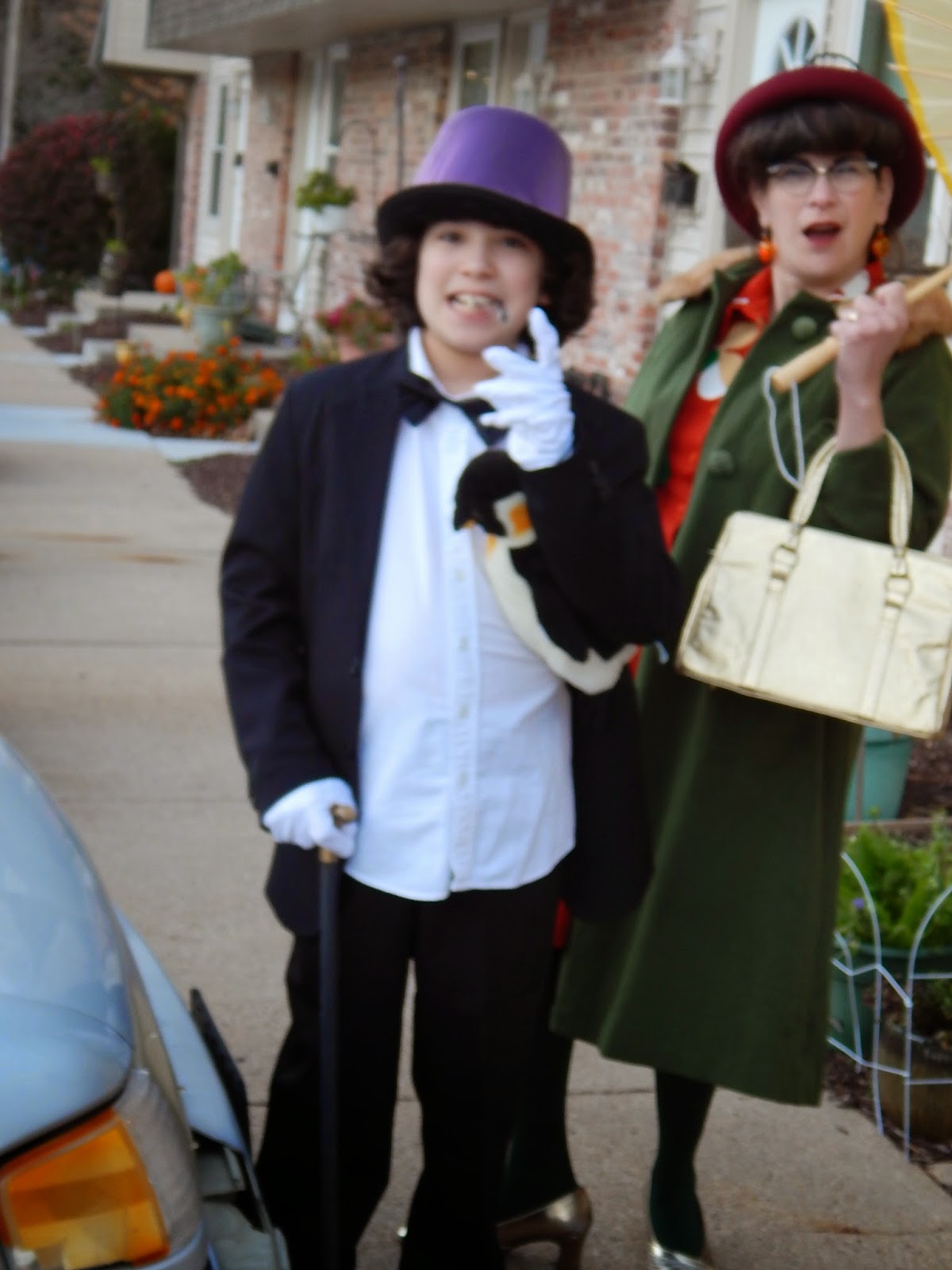 The resemblance is striking, no? 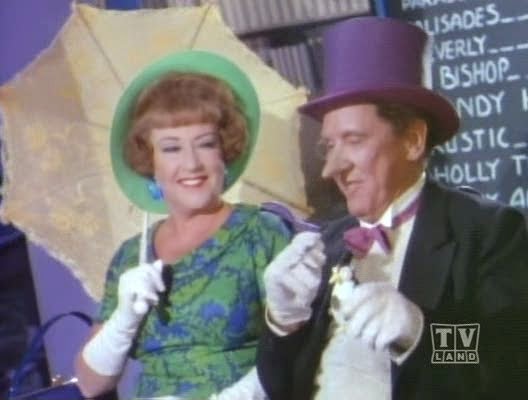 We took our costumes over to the University of Nebraska at Omaha for the annual, Hauntcert. It was wicked good. 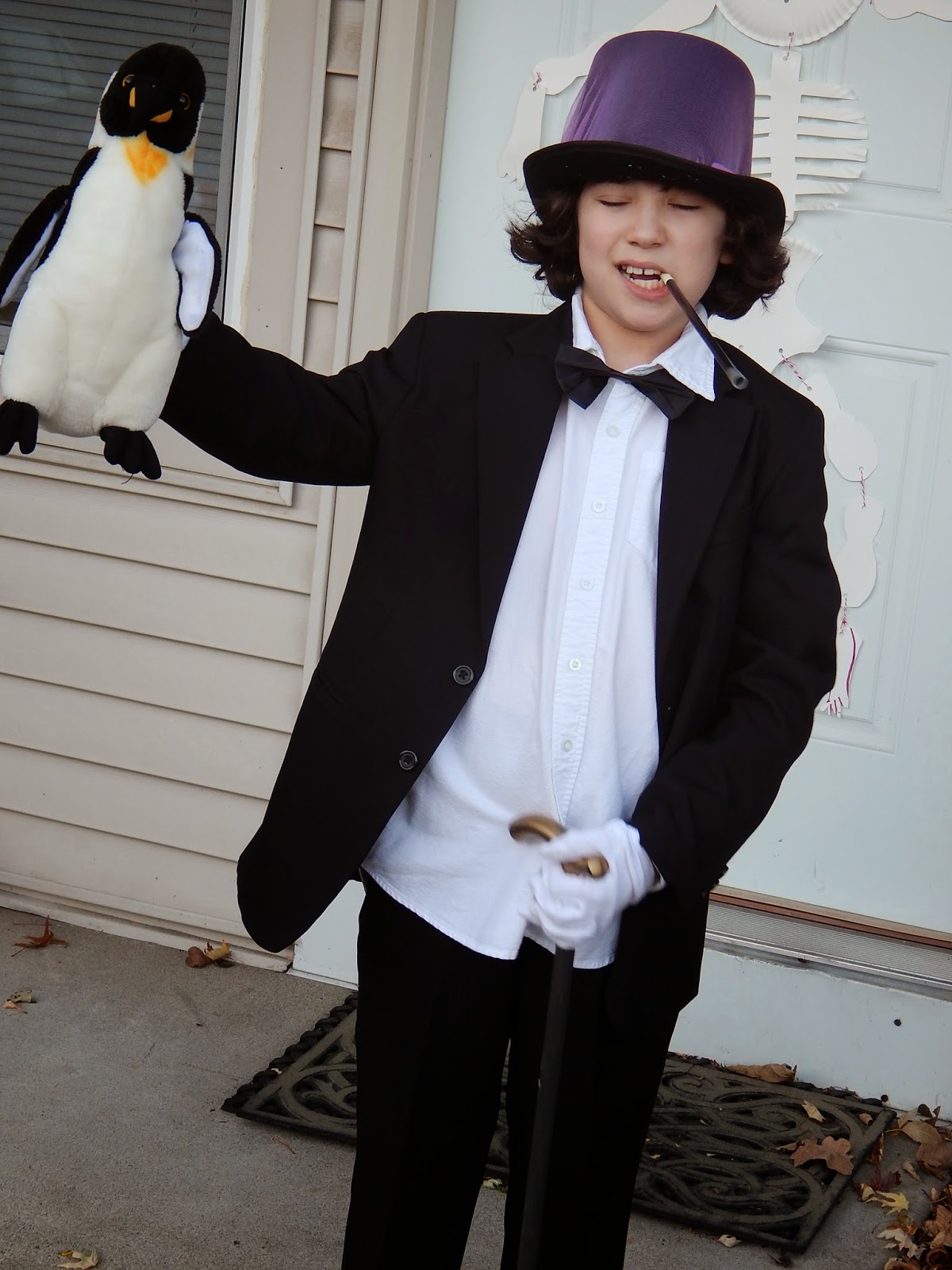 When I was a wee one, Halloween was but one night, and you only got to wear your costume once, perhaps twice if it fell on the weekend and your school had a Halloween party (Ours did, it was a carnival called the..."Halloweenie"). Today, there's ample opportunities to wear your costume before the big day. Danny's costume was really nothing more than clothes he already owned, and a purple scarf stapled to his top hat. I thought someone might give him crap about the cigarette holder, but no one did. For Friday night, I'll use an eyebrow pencil to draw on a monocle for that extra detail. 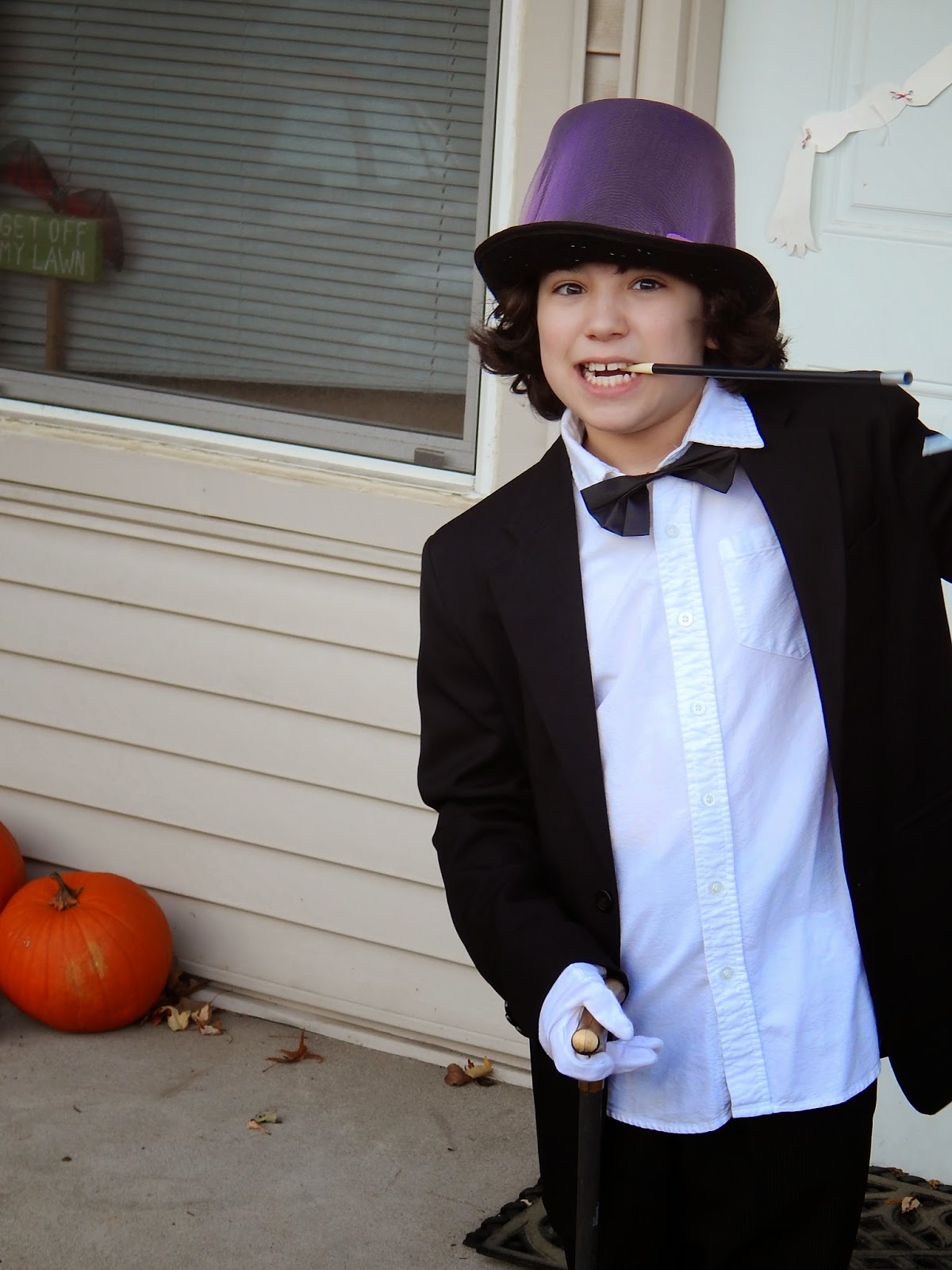 If we switch out the hat, and give him a grey wig, he can dress as FDR next year. 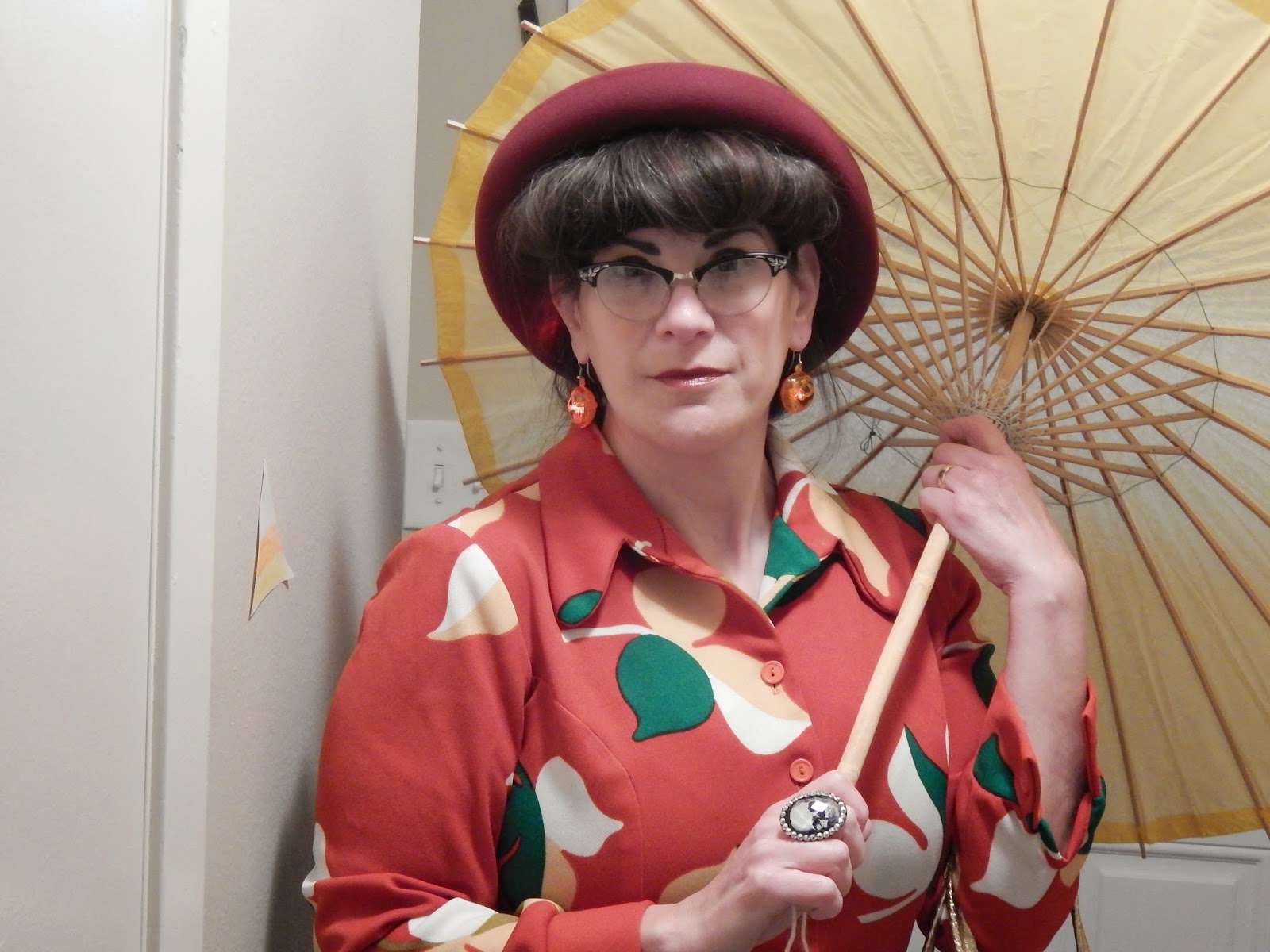 I did fake-fringe with the help of a hair rat. I bought the parasol some time ago knowing that there would come a day when I'd need it. Sure, I didn't think that would be at the end of October, but I did finally put it to use. 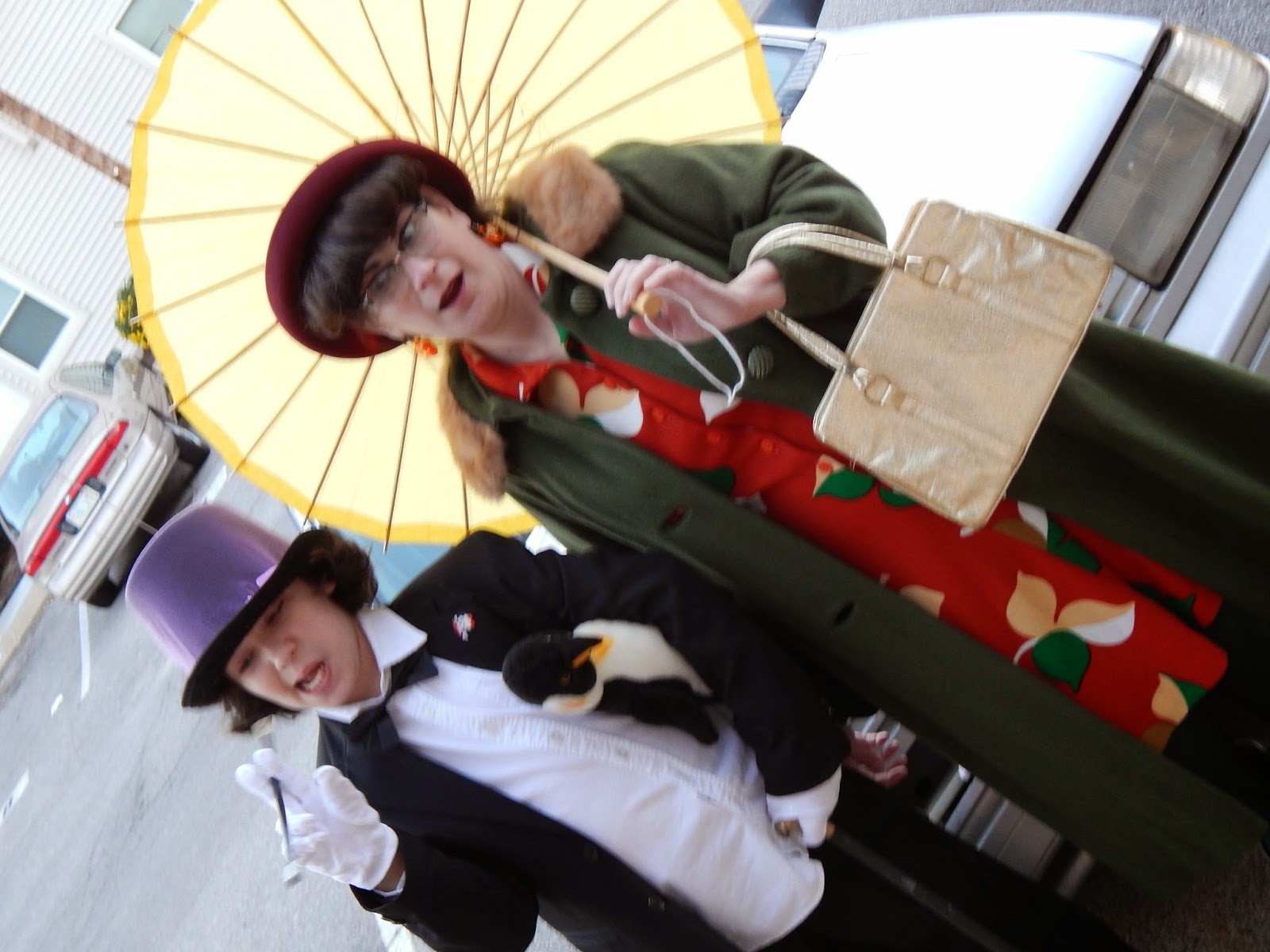 POW! WHAM! Take that Batman! Now look what you've done you caped crusading fucker-you tilted us all funny. Get him, Penguin! 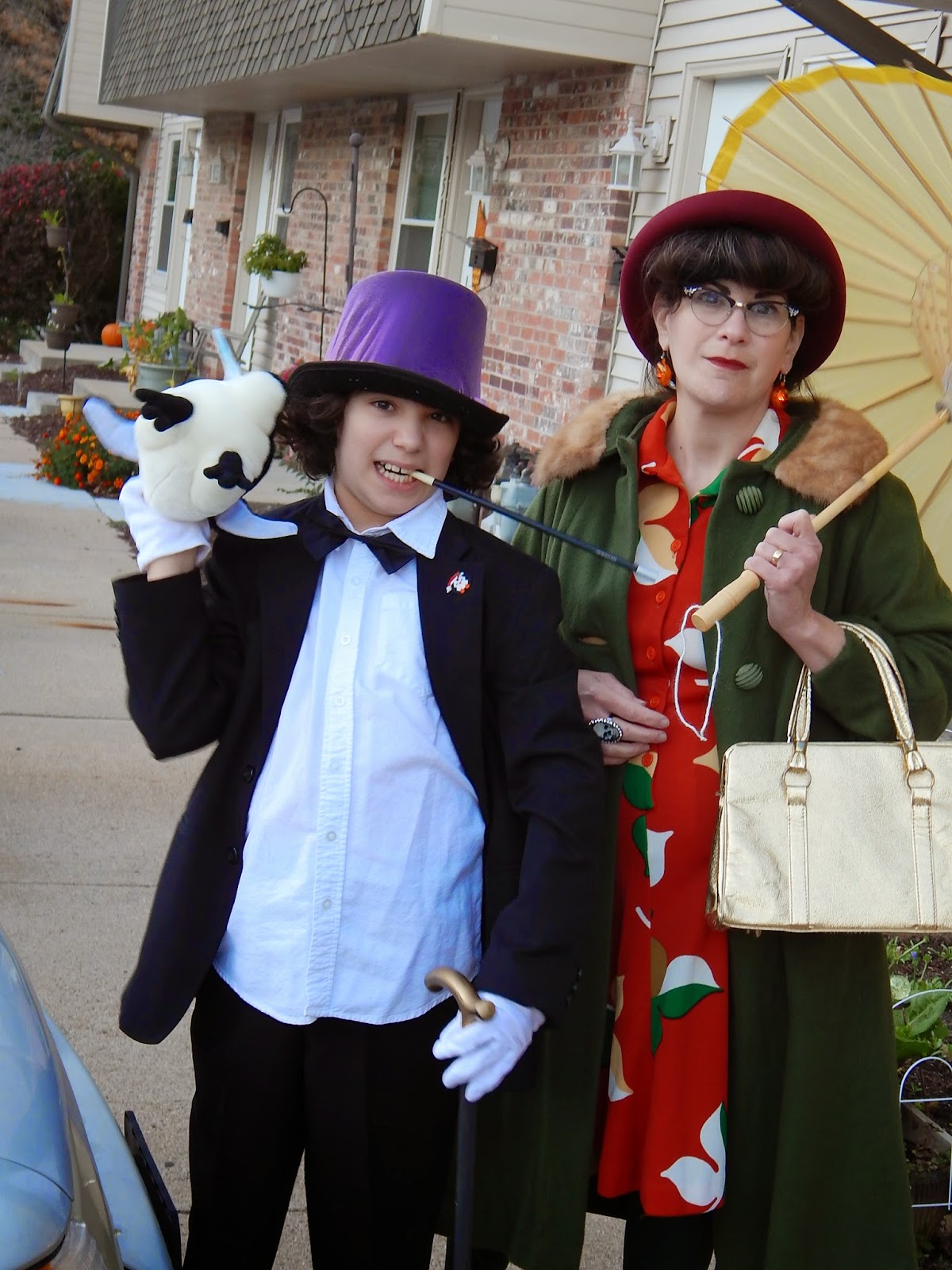 I bought candy to hand out when the little beggars show up on Friday evening. I went with the only lollipops I could find that were nut-free/gluten-free/and dairy free. I'm going to hand out stickers as well because the candy seems a little boring, but I want to have something everyone can enjoy. 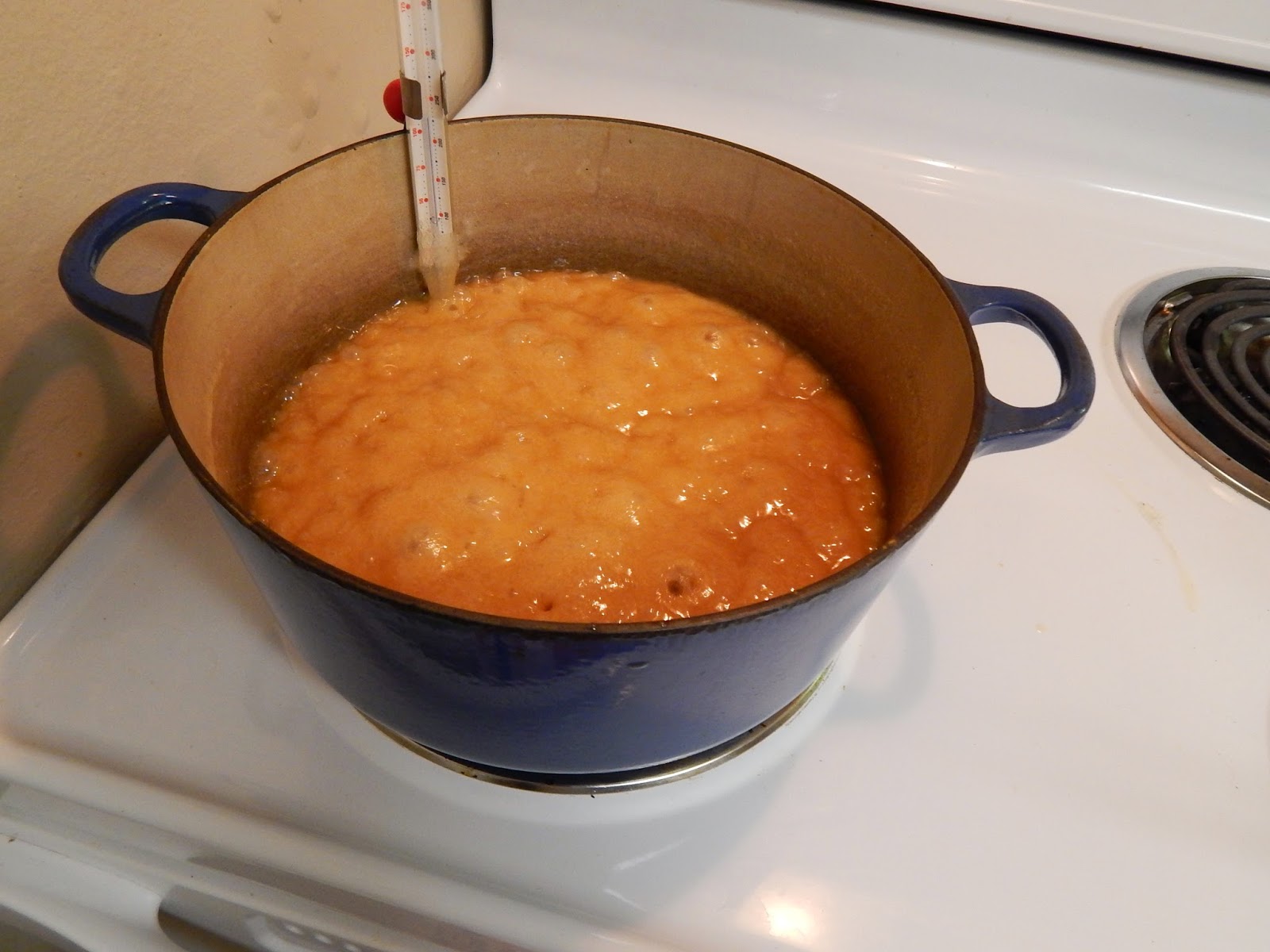 For ourselves, co-workers, and library volunteers I made two gigantic batches of caramels. I call these my, "Famous" caramels because they got me in the newspaper a few years ago. That wasn't too exciting, but Danny came along to have the photos taken and got a tour of the newsroom, met some journalists, and that sort of thing. That was exciting (he was six). I've made these in every imaginable flavour from Earl Grey, to coffee. Licorice, lavender, cocoa-you name it, I've probably done it. This year I went with salted vanilla, and salted lavender. Mr. ETB took a box of each to work and they disappeared quickly. You can dip the finished caramels in chocolate for an even more indulgent treat. I'll give you the basic recipe, but feel free to customise as you like. This will make about 2 lbs. of candy. If you do licorice, add a few drops of black food colouring for a dramatic looking candy-like these... 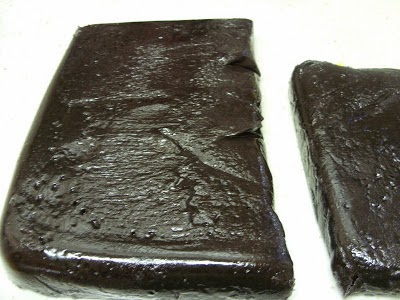 In a large, heavy pot heat everything except the salt and vanilla over medium heat, stirring frequently until sugar dissolves. Bring slowly to a boil and cook to 248 degrees F. I rely on a thermometer rather than ball tests with water. If you are good with that sort of thing, keep doing what works for you. Meanwhile, generously butter an 9x13 heat-proof pan (I use a corningware casserole). Lightly salt the pan.

When caramel reaches 248 degrees F. Remove from heat, and stir in the vanilla. It will sputter, so be careful. Quickly pour it into the prepared pan. You won't get it all out of the pot-and pushing it with a spatula will make it rumple and crease funny in the pan, so just let it cool and pick at it as a treat for the cook. After you pour the caramel, salt the top again lightly. Let it set undisturbed until cool. You will see a bit of butter pool up around the edges-that is good. It will help it out of the pan, and keep it from sticking to the wax paper you wrap it in. While the caramel cools, you should cut about 50 small squares of wax paper for wrapping.

When cool, nudge the caramel out of the pan (you may need a heavy spatula, or a knife). It may lose shape a bit, but it won't matter at this point. I find it easier to use a large heavy chef's knife to cut the slab into six strips, then do the remainder of cutting in pieces with kitchen shears. No matter what you use, it will be sticky (that's the nature of caramel). Wrap tightly. They keep well, if you can hide them well enough. Otherwise, you may wish to make a second batch. 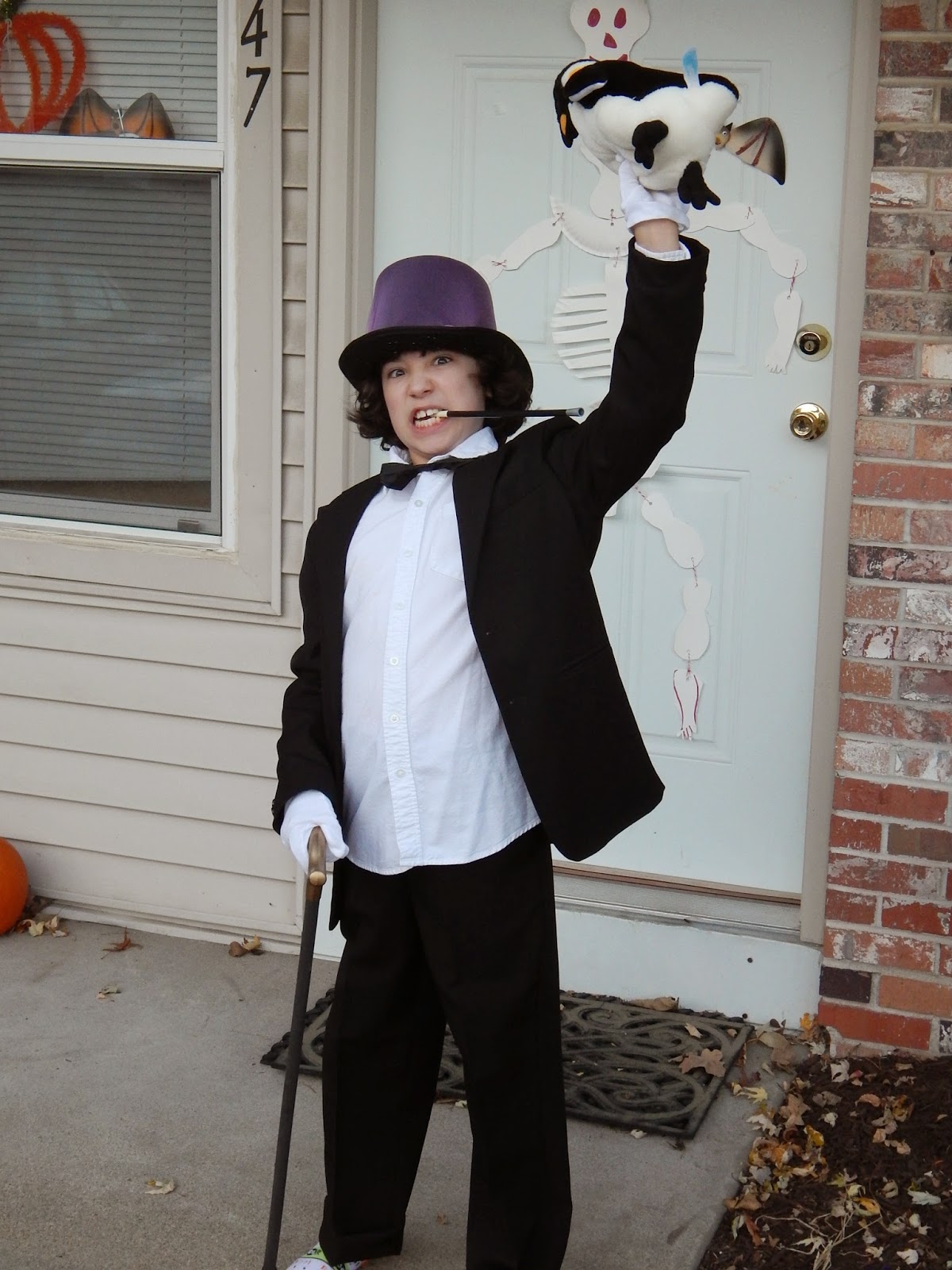 Yes, the skeleton on the door is made from paper plates. Nifty, eh?
Posted by Goody at 8:33 PM
Labels: Batman, Candy, Caramel, costumes, Halloween, Things My Son Will Discuss In Therapy Someday

Yum, yum those caramels look delicious! Hey, I quite love those bangs. You should wear them again. I bet it almost didn't seem like a costume of sorts because you might also be able to wear it mid-week after halloween. A very great ensemble for the both of you. Creative!

I know, every day is Halloween in my world-though a parasol might be a stretch ;)

@Curtise
Well it does get less hot than a dry caramel made with melted sugar-I don't fiddle with those anymore. I don't think you're lazy for not wanting to deal with a sticky mess!

Funny thing? I'm less worried about the boiling candy than dropping the heavy Crusset Dutch Oven. I think I need lighter cookware as my arthritis progresses.

We so appreciated the gift of caramels last year. Thanks again, they disappeared quickly. Candy maker and bread baker, you are one hell of a woman!

I'd forgotten about that. By the way, I have Brown Dutch lettuce from Monticello taking over my garden at the moment. We've been tarping it on frosty nights, but otherwise, your seeds are really thriving! The lettuce seems to like the cold. Danny had some for lunch with baby spinach that grows alongside it. This is the perfect time of year for lettuce as the little munchy insects are all gone. Anyway, THANK YOU!

You two look wickedly fabulous!! Danny is one lucky lad to have such a cool mother like you, you two will have fun forever!!! I so hear you on having to wrap the caramel tightly, for security reasons alone in our house!! Russian fudge that TOF makes has this habit of not lasting long shall pass on the wrap it up idea for his next batch, but not before I have scored myself a few sneaky bits of course. Enjoy all your Halloween fun. It is slowly catching on over here in NZ. I took the lads out with a bunch of other kids when they were small to trick or treat, it was successful, mind you we did go to a posh area of town!!

I had never heard of Russian fudge, so I did a google search. It is very similar to what we call "Blonde" fudge, except we'd use corn syrup because Golden is $$$$ here (I made a Parkin for next week and it ended up using six dollars worth of Golden Syrup. It had better be *very* good Parkin).

So now I'm excited to have something new to try!