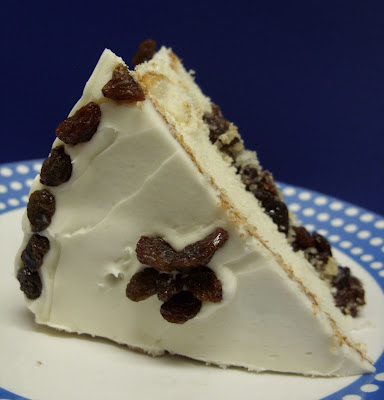 Oh, the lengths I'll go to using up egg whites left from making pasta and ice cream. By the time you add up the expensive dried fruit, butter, and cake flour I would have saved money tossing out the whites-but I can't do it.You have no idea how many egg whites I have in the freezer. Anyway, this cake is a beauty-a mistake really but it turned out so well, I'm going to share the recipe.

First, the extract. When the hell did I buy a large bottle of rum flavoured extract? I can't imagine either, as I have no qualms about using rum in baking. I wonder if I bought it accidentally, mistaking it for lemon? I went ahead and used it to great effect, which came as a pleasant surprise. I also made a batch of coconut/pineapple ice cream, and a few drops of the extract made it Pina Coloda-like, which is nice if you like Pina Colodas, which I don't. My mother adored them, and used to keep a bottle of that pre-mixed bottled drink in the fridge for an afternoon cocktail. "It has the rum already in it!" she declared the first time she brought a bottle home. Forget the copier machine, or the PC, or the moon landing-Pina Coloda mix with the alcohol already in it was the apex of 20th Century innovation. I should hunt down a bottle of that stuff and see if it makes a good ice cream. Anyway, yeah-rum extract works better than I would have expected, though I don't think you save anything in terms of alcohol because extracts are mostly alcohol.

So the cake, you want to know about my screwed-up cake that turned out perfect. I accidentally mixed the sugar in with the cake flour, instead of creaming it with the butter. I wasn't about to toss it out and start over, so I cut the butter into the flour mixture until it was a very fine crumb. Instead of beating the egg whites (because what would I fold them into?) I went ahead and dumped them in. Know what? It worked! Sure beats hell out of standing there with a whisk and a copper bowl beating egg whites. See, I've learned from my mistakes. The Old Betty Crocker Picture Cookbook had recipes that incorporated the butter and eggs this way, so I figured if it wasn't the lightest cake I ever baked, I'd get something. It wasn't heavy at all-it was a lovely cake.

The heat is expected to return by the weekend, so this might be the end of my cake baking for a while (again). I'm glad it turned out as well as it did.

Mix all except the extract in a saucepan. bring to a boil and cook over medium heat until thickened. remove from heat, stir in extract, and chill before using.

Grease and flour 2 9 inch cake tins. In a mixing bowl, combine flour, sugar, baking powder, and salt. Cut in the butter until very fine (use your fingertips at the end. The mixture should feel like damp sand. Mix in the milk, cream, and extract until smooth. Beat in the egg whites at high speed with a hand mixer until light-at least three or four minutes. Pour into prepared pans and bake until they test done-about 25 minutes. cool 10 minutes in pan, then unmould onto rack. Cool completely before filling.

Beat butter, cream cheese, and extract until light. Slowly beat in the icing sugar until you reach the desired consistence. Decorate with raisins (no really, that is part of my recipe instructions-don't screw with me, I put a lot of thought into this-use the bloody raisins. If you want to improvise, and make up the rules as you go along, take up cricket. Put the goddamned raisins on the cake you ___________________.
Posted by Goody at 6:17 PM
Labels: Cakes, Cream Cheese, Dried Fruit, Egg Whites, extracts, Raisins, Rum, You're Not Going To Throw That Away Are You