Rhubarb and Custard (and Strawberry) 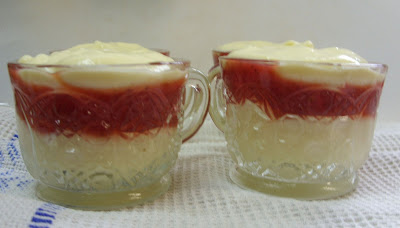 A new twist on an old traditional favourite. This year, I used some frozen strawberries to stretch the two slender stalks of rhubarb in hopes that Danny might eat it (he hasn't quite developed a taste for tart things). Worked as predicted, he tried a spoonful of the filling and declared it "perfect." I guess I can't ask for much more than that.

Usually, I roast rhubarb and you can see an earlier recipe for rhubarb and custard HERE. The rhubarb sorbet was pretty magnificent as well.

The sauce I made today is really a loose jam and I plan to use the extra as a filling for fried pies later in the week (if it lasts that long). I didn't do exacting measures because I was working in such a small batch. I often don't measure precisecly when making sauces/jam that won't be going through the canner. This is forgiving as you just keep cooking it until you get the thickness you want. A little more or less water isn't a big deal. Here's aproximately what I used for the rhubarb-the custard recipe that follows is a bit more exacting.

Put it all in a pot and cook over medium heat until reduced to a suitable thickness-I like mine as a loose jam, but if you overcook it, no big deal, just thin some down in a pan before serving it.

For The Cornstarch Custard:

In a saucepan, combine sugar, cornstarch, salt, and egg yolks. Slowly, whisk -in the milk over medium heat. Bring to a boil, cook one minute longer and remove from heat. Whisk-in the butter and extract. Pour into a heatproof bowl, press clingfilm onto the surface and puncture in several places with the tip of a sharp knife. Cool at room temperature ten minutes, then in fridge twenty. Remove film, stir and transfer to smaller container. Cover and stir again in another half hour. If cooled, pour into serving glasses and layer with sauce. Cover well until serving time.
Posted by Goody at 12:35 PM
Labels: Custard, Jam, Pudding, rhubarb, Strawberries