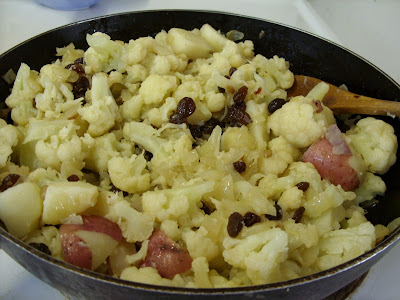 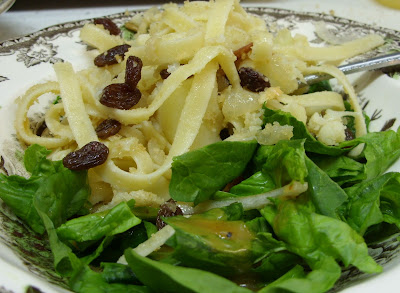 I should have used homemade pasta for this, but I was just too tired. There's a lesson in that-keep the freezer stocked with homemade pasta! Anyway, it was still a successful recipe that even Dannypants enjoyed.

I get into a rut with cauliflower-roasted with olive oil and paprika, curry, or steamed and served with butter and salt. I've never made a cauliflower bake that I've liked (or eaten one, honestly though my husband enjoyed one coated in Stilton in a pub somewhere in London that I can't quite remember-but come on-it was coated in Stilton, I should think that would save even the worst cauliflower bake). Growing up, my mother put raw cauliflower in salads because she'd read somewhere that it would help with weight loss. I never could stomach more than a piece or two of the stuff raw-it didn't seem worth being thin.

Enter, a child that is in love with cauliflower. Danny would eat cauliflower raw, probably to the point of illness. Boiled and mashed, roasted, baked in a flabby gratin-he doesn't care. When we go shopping each week, I let Danny select 1 vegetable and 1 fruit-within reason. I'm not buying ten dollar a pound cherries in December. Not surprisingly, he usually likes what he selects, the exception being those "baby" kiwi that look like grapes. The idea is that they bred all the acidity out of them, which sounds great-if you like a cloyingly sweet kiwi. We couldn't eat them, though Danny really did give it his best effort. Anyway, this week cauliflower was affordable and that was the choice.

Until I read THIS recipe, it would never have occurred to me to include raisins and anchovies in the same dish. It worked. I honestly wondered what I was about to serve my family, but it really came together nicely. I substituted sunflower seeds for the pine nuts and I toasted my own breadcrumbs from sourdough bread, but otherwise, I followed the recipe and ended up with a great new way to serve cauliflower. I think this might be the dish that changes the way I feel about cauliflower.

I served it with a spinach salad for which Danny made a wonderful blue cheese dressing I will share in another post.
Posted by Goody at 5:09 PM
Labels: anchovies, Cauliflower, Dannypants, Pasta, Raisins, savoury fruit