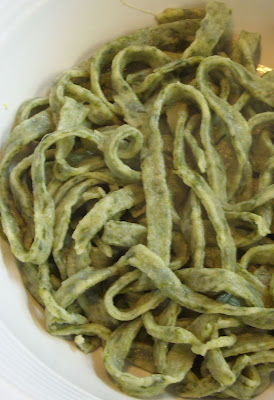 You know how it is, once you discover how great a new appliance is, you use it every day for like, a year. Expect a great deal of fresh pasta in the coming months.

These were really special, and bear no resemblance to commercial "green" noodles. As an aside, I was speaking with someone yesterday who is my age and has never eaten spinach. I don't know why I find this so astounding, but I do. I promised to bring her some calzone next time I make it, but it dawned on me that pasta might be an easier introduction.

This made a very generous amount of pasta with plenty for freezing.

In a bowl, beat the eggs until very light. Beat in the water, oil, salt and half the spinach. When spinach is broken up somewhat, add the rest and beat until well distributed without any clumps. Beat in the semolina. Beat in just enough of the all purpose flour until it comes together. At that point, remove to a floured work surface and add flour by hand, kneading it in until you have a very stiff dough. You will really get a workout, but give it a thorough hand kneading of about five minutes.

Wrap the dough in clingfilm and let rest 20 minutes.

Because of the spinach, it will be a bit sticky so you'll need to generously flour each piece before running it through the pasta maker, and again before sending it through the cutting blades. After the pasta is cut, drag it through the flour one more time and set it on a rack to dry off a bit before freezing or cooking. I let mine sit about two hours and it was fine.

I did not cook these at a full rolling boil as I was afraid they might be delicate. Turns out they were not, and held together fine. I'd put them in boiling water to start, but then reduce it to medium high for the next eight minutes or so. It will depend how thick you ran them, so check frequently until you reach the desired tenderness.

Really, I had no idea what I was missing-these green noodles rock.
Posted by Goody at 6:00 PM
Labels: Noodles, Pasta, Real Super Classy Stuff Circa 1970, Spinach