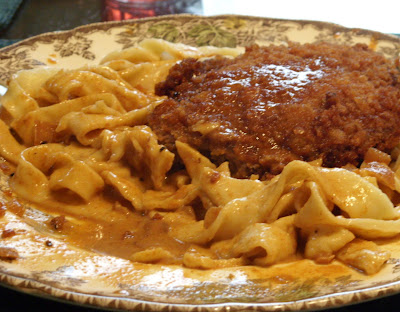 Depending where you're from this will either be a cutlet, schnitzel, or chicken fried steak. In Northern Illinois where I grew up, this would be called schnitzel. In Wisconsin, where the population is largely German, they would laugh at calling this a schnitzel. More likely than not, a German from Wisconsin would call this, "An Abomination." They prefer to grill or broil their steaks.

With the oven broken I was kind of limited in preparing it without setting up the grill on a freezing cold day. I don't have a great deal of experience with frying steak because it just isn't something my mother did. I do remember her being appalled by our Hungarian neighbour next door who pretty much breaded and fried everything from steaks to organ meat. I think I must have been channeling Mrs. S when I made this because paprika sauce isn't exactly the sort of thing we ate at home either. At that point, I just went ahead and made my own noodles because heck, if you're frying a steak and making a complicated sauce, you might as well make noodles.

Mr. Eat The Blog really enjoyed his dinner. Danny enjoyed the noodles with some leftover vegetarian chili on top, and I was able to get a few forkfuls of salad without too much harm. I cook beef so infrequently (you thought I was going to say, "rarely", didn't you?) that Algy The Dog was dancing around the kitchen trying to make sure I noticed him (dogs aren't subtle, are they?). I did remove the breading before giving him some, but I don't think he minded.

I adapted the recipe for the sauce from the one HERE.

In a medium saucepan combine the onion, wine and bay leaf. Boil over high heat until almost all the liquid has reduced. Add the stock and reduce until it is half a cup. Add cream and paprika. bring to a boil, then reduce to a simmer and cook until slightly thickened (you want the sauce somewhat thin). Adjust salt and pepper and stir in butter. Remove from heat, cover and keep warm until needed.

Between two pieces of waxed paper, pound the steak until it is very thin (about 1/4 inch thick-thinner if you can get it). Heat about 1/2 inch of oil in a deep frying pan.

In one shallow bowl, place a beaten egg. In another bowl place the all purpose flour. In a third bowl, the Panko crumbs. Salt and pepper the steak and dredge it in flour. Dip the steak in egg and then dredge in the Panko crumbs. When oil is hot, place it in the pan and fry about three minutes on each side (but watch it, because frying isn't an exact science).

Serve over noodles with sauce. Impress people (except Germans from Wisconsin because they will still laugh at your steak).
Posted by Goody at 6:19 PM
Labels: Beef, Fried Food, German, Noodles, Paprika, Sauces, Steak, The Reason My Husband Married Me