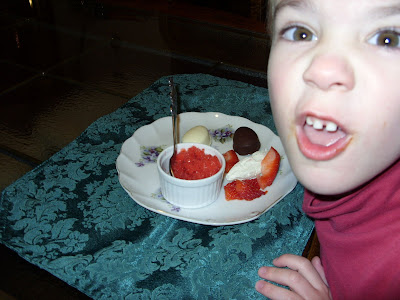 Danny calls his afternoon tea, "This and That." As in, "Mama, can I have my little this and that?" Since it is a long time from lunch until dinner, This and That is usually around three or four, depending how late Danny naps.

Most of the time it is something like crackers and jam with a glass of milk, or some cheese and fruit. Sometimes we have a piece of chocolate, but it is almost never a full-fledged dessert because we often have something after dinner. It is, as the name suggests, whatever I have on hand.

Sometimes, I get it all wrong, and what I think will be spectacular gets wincing from Danny as though I were trying to feed him nails. What you are looking at is strawberry granita, sweet yoghurt cheese, and fresh strawberries. There's some white and dark chocolate as well. I ask you, what could anyone possibly not like here?

I still think the granita was exceptional and the cheese lovely, but Danny was less impressed. Guess I'll stick to the familiar basics from now on as he liked neither this nor that today.

Your tastes are probably more sophisticated than a four year old's, so here's the recipe:

Bring the water and sugar to a boil, whisking until dissolved. Remove from heat and cool. Puree the strawberries in a blender until smooth. Combine and pour into a glass or metal tray and place in the freezer. Stir every 40 minutes with a fork until it becomes hard. Scrape into a container and store tightly covered for a few days.
Posted by Goody at 6:57 PM
Labels: Dannypants, Granita, Strawberries

I can not express how jealous that makes me. You need to get your boy to explain to m girl why napping is a good thing.

It isn't as great as it sounds-he goes to sleep at 9PM and is up at 7 AM each morning. I wish he would get to sleep earlier, but since he can't, we've stayed with the afternoon nap. Even if I let him skip nap, he won't fall asleep earlier.

Sometimes, I think the only reason he naps so willingly is because there's tea at the end. The things kids will do for a jam sandwich ;)