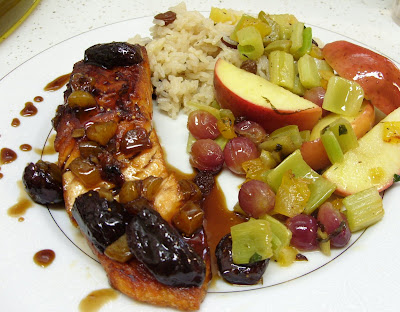 You can tell it is Lent in Nebraska-the grocer had Scottish Salmon for $7.99 a pound. My Scotsman does not care for salmon much (stranger still, being from Seattle and all) but had to admit is was pretty tasty prepared this way. Personally, I think it is dill he dislikes more than salmon, so I avoided the typical preparation of dill and capers in butter sauce.

A one pound fillet fed three of us generously with vegetables, fruit and rice. The glaze may be prepared ahead and stored in the fridge until needed-then, simply warm it through and pour over the fish.

Bring to a boil and then reduce to medium heat. Cook until reduced to a syrup (should reduce by about 1/4). Cool, then cover and chill until needed, or use immediately.

For The Fruit/Vegetable Side:

Rub both sides of salmon with olive oil. Heat a pan (cast iron is best) over medium-high heat and cook about 4-5 minutes per side until done. Drizzle with warm maple/balsamic glaze
Posted by Goody at 6:01 PM
Labels: Apples, celery, Dried Fruit, fish, maple, Salmon, Vinegar