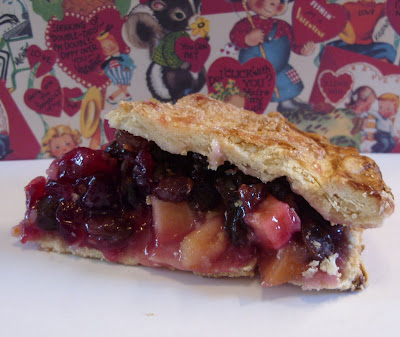 As far as I'm concerned, this was a nice pie, but Danny insists it is the best pie he's ever tasted. Ever. That's saying something as he's been served a number of pies over the years. A favourite pie merits posting, I suppose.

I added the raisins as I thought the tart apples and cranberries needed it. This turned out to be a good decision as the liquid was also a bit on the wet side. Not terrible, but more liquid than many people would like. The raisins helped absorb some of the excess.

I've never used corn syrup in a pie filling. I thought of trying Golden Syrup, or even Steens Cane Syrup, but ultimately I did not want this to turn into an obscenely expensive pie. At close to $6.00 US for a cup of Golden Syrup, I did the maths, and went with the corn syrup. I'm not corn-phobic, but I also don't buy soda, or much in the way of prepared food. I tend to think of these things as an allowance. Obviously, were I sucking down a 2 litre of Coke each day followed by a Hershey bar, I might reconsider. The old man used to do that-chocolate bar and a soda thing. It used to make my head tingle just watching. I think the lorry drivers have better things to get all hepped up on these days. Dad was partial to sugar. So yeah, the corn syrup is your call.

The one thing I might add to this recipe would be dried cranberries. Then again, it might be overkill. Sultanas probably would have looked nicer than raisins, but as you can see by the photograph, I'm not the sort of person that fiddles with their food. I have the diner mentality of slap it on a plate and cover it in cling film if it needs to sit a while. There, I arranged your slice of pie. In fact, you can see part of the crust broke when I cut the slice for the photo. I could have cut another slice, or affixed the broken piece back on-but that would take 20 seconds I could be spending telling you about my dad's dietary habits. I know you don't come to the blog for pretty pictures (at least, I hope you don't or you'll be kind of disappointed after while).

Turn mixture into a lined, 9 inch pan. Dot with butter. Adjust top crust, cut vents, and flute edges. I brushed mine with half and half, and sprinkled it generously with granulated sugar for a crunchy topping.