How To Write About the New Food Trends

Reading an article about the latest food trend (really, I'm not going to dignify it with a link) I've come to realise you can convince people to eat anything provided they think it is trendy, and you use the correct language to describe it:

This year's trendy new menu item for the foodie community is none other than the simple, unadorned, shit sandwich. The shit in a shit sandwich varies from a silky texture to a more rustic, chunky texture redolent with earthy flavours of the intestinal tract. The bold flavour and mouth feel of a shit sandwich when paired with the sharpness of an artisinal sourdough will keep foodies knocking down (back) doors for more. Imbued, laced, kissed and lovingly drizzled with subtle accents of whatever the small-batch, locavre had twenty four hours before crafting the raw, unpasturised shit sandwich, no two shit sandwich experiences are quite the same.

Whatever you do, purchase your shit sandwiches from a reputable purveyor-you may wish to skip the popular food truck on this one, unless you can verify the source of the shit. You can taste the difference between locally sourced shit sandwiches, and those shipped in from another city. If I'm paying for an Omaha shit sandwich, I don't want it tasting like Lincoln shit. I know what Lincoln shit tastes like, and no self-respecting "cacovore" is going to shell out good money for that. Don't even get me started on the shit butties from Beatrice. They don't even offer you a napkin.

If you plan to attempt a home kitchen version of the shit sandwich, you'll need to plan ahead and make sure you use entirely, locally sourced fibre. The ingredients are easier to spread when fresh and warm, but if you must delay the preparation of your shit sandwich for say, a soirée later in the evening, chill it ever so carefully beneath a dampened towel of 100% Egyptian cotton, preferably with a thread count of at least 350. Remove it from the fridge and let it re-warm to room temperature and then quickly blitz it in a liquidiser until you have a soft, delicate consistency. If you over-do it, don't despair! Everyone likes diorrhea vichyssoises. You'll need to add some potatoes to round it out-look for heirloom variety baby spuds to add that look of "Loo to table without middlemen" foodies love.

Chefs recommend you pair your shit sandwiches with the bold, muscular flavour of root beer. A small batch, craft root beer will have notes of tree bark, which will recall nicely the olfactory experience of taking a crap on a log when you went camping the summer you turned ten. Hints of wintergreen will produce a heady topnote not unlike those gigantic pink lozenges your Gran kept loose in the bottom of her handbag that inexplicably read, "Canada." Any true foodie knows that Canada tastes like weak beer and Tim Bits.

As for presentation, chefs across Nebraska who declined to be quoted directly for this article have confided on background that the addition of a frilly toothpick and a cocktail olive really sell these sandwiches. Said one well-respected soon-to-be Nebraska's first Michelin starred shit artist, "Look, you don't want to be left with a ton of this the next day. I can't move day-old S-Tartines. Our patrons have more money than taste, and I'm telling you, the frilly toothpick thing sells sophistication. Sure, molecular gastronomy has a place, but if you source it correctly, you get all the foam and viscosity you need without cannisters of chemicals and dicking about with burners and flasks. Sometimes you have to ask yourself, am I a biologist, or a chemist? Me? My cooking is all biology." 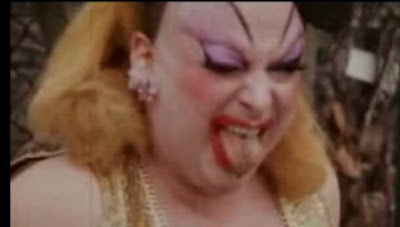 Posted by Goody at 7:19 PM
Labels: Foodies, Humour, Marching Morons, Nebraska, People Is Dumb All Over, Things My Son Will Discuss In Therapy Someday