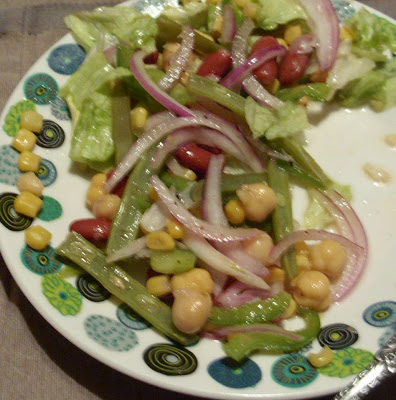 Half-eaten salad. My son grudgingly stopped eating for 30 seconds so I could snap a photograph. He glared at me like it was child abuse or something.

Danny loved this, and he's not the sort of person to carry on about a salad. I made some major changes to the original recipe, but I liked the idea of using both garbanzo and kidney beans. I had fresh green beans, so I steamed them lightly and tossed them in. The addition of tinned corn wasn't something I would have thought of, though I suspect I'll never be permitted to serve a three bean salad without it again.

I always have difficulty dissolving granulated sugar in oil and vinegar for salad dressings. I'm sure it is just laziness on my part, but I usually resort to using either honey, golden syrup or Cane syrup instead. This time, I used two tablespoons of Steens boiled cane syrup and I suspect that was what took this rather ordinary bean salad into the top tier of my seven year old son's "Best ever" dishes. He insisted I blog it, lest I forget what I did different from the recipe. I do think you can manage with sugar, or honey, or what have you, but a bottle of Steen's in nice to pour over French toast (and no, they aren't compensating me to say that, I just like and use the product).

This salad improves after a day, though it is pretty fantastic on the first.
Posted by Goody at 1:14 PM
Labels: Bell Peppers, Chickpeas/Garbanzo Beans, Green Beans, kidney beans, Onions, Salads