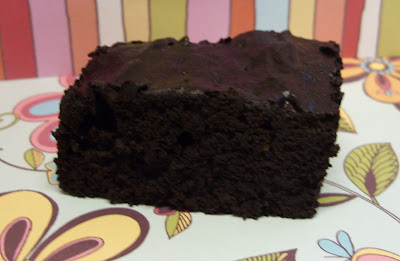 I accidentally made something healthy. Don't tell anyone. I was inspired by the great deal on tinned pumpkin and the understanding that my family does not like tinned pumpkin. I did what any sane person would do-I shoved it into brownies. I didn't try to fool anyone (I don't think sneaking things into people's food is a decent thing to do) and when Danny was told it had pumpkin he made a face, but tried it anyway (I mean, come on-it is still a brownie). He really liked them. I mean, really liked them which is great because they are very easy to make, and I bought a lot of pumpkin. There, I used tinned pumpkin in something that isn't disgusting. Where's my award?

I will note that a very dark cocoa makes this seem more indulgent than it is. I buy the inexpensive Hershey's Special Dark cocoa powder (They aren't paying me to do so) as I think it is a good quality product for the price. I can't randomly purchase cocoa and other baking products due to Danny's allergies and cross-contamination concerns, but feel free to use any sort you like. I'm not about to tell you what cocoa to like. I used to really like Droste before it was ten dollars a box.

In a large bowl, beat the sugar and eggs together until light in colour, and thick. Beat in the vanilla, pumpkin, and oil. Sift the combined flour and cocoa over the mixture lightly and very gently fold in until combined.

Pour into pan and bake 25 minutes or until it tests done. Cool in pan on rack. Cut into squares.
Posted by Goody at 12:51 PM
Labels: Brownies, Chocolate, Eggs, Healthy, Lower Fat, Pumpkin