No, not the band, though this baby's blue. Yeah okay, it was a long day. 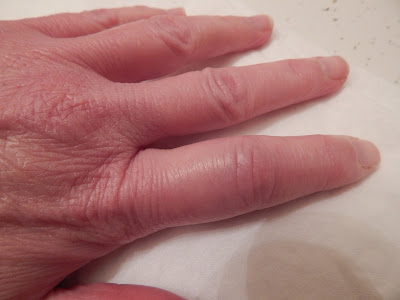 I finally gave up, and saw a doctor today. Short version-my immune system hates me. Another course of steroids (yay) and I need to see a rheumatologist. Anyway, I had a laugh when the doctor suggested I wear gloves to keep my hand warm. "Do you have any gloves?" she asked. "That", I replied "Is something I own in quantity, and in every possible colour!" At last my vintage collecting has paid off. Typing one handed is a bitch though.

I knew it was going to be something that wouldn't get solved easily. By the time I got to the doctor it was spreading to my middle finger. We can't have that, can we? How am I supposed to communicate? God forbid I'd have to give you a thumbs-up instead. You don't come here for positive reinforcement, you come to get flipped off. 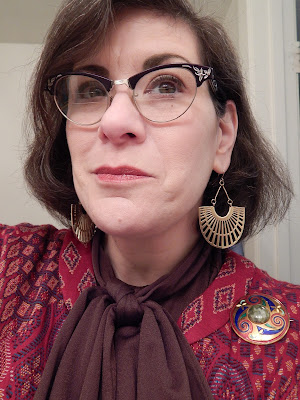 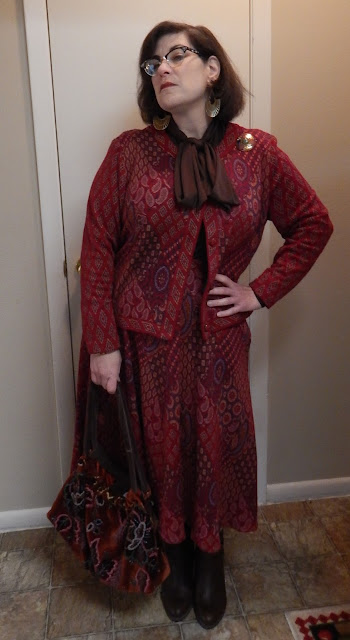 I had to get my height taken at the doctor's office (and my weight, but we won't go there-thanks menopause!) and in heels I am almost 5'3. That's disturbing, because I used to be 5'3 in stocking feet. I'm wearing high heels. Either their yardstick is being used wrong (which is possible given the state of education in the US these days), or Danny's right-I'm shrinking. I thought that wasn't supposed to happen until I was 70 or so. It had to be wrong, but I'm too freaked out to measure myself at home.

And in other news, Iowa lawmakers want you to buy your baby a hand- gun. What could possibly go wrong? Look, I'm not anti-gun (strange for a lefty like myself, but once you get to know me I'm full of unpopular opinions) but that's madness. We're not talking about a hunting rifle, they mean handguns. Don't say I didn't warn you when four year olds start pulling off bank heists. Look for charming Facebooks posts featuring infants with their shiny, new pistols. "Baby's First .35" Awww, ain't that cute? Kids can't sit in a car unattended for five minutes, but they can have a handgun. *slaps head* 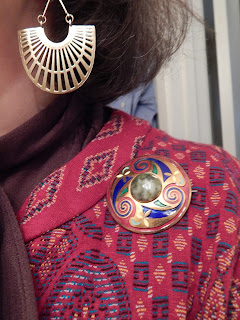 Outfit Particulars:
Vintage double knit suit-Goodwill
Vintage ActIII blouse-Goodwill
Bag-Goodwill
Boots-K Mart
Brooch-old, antique shop sonmewhere
Enameled Noah's Ark bracelet-Filene's I think (long ago)
Earrings-K Mart a few years ago
Lippy-Estee Lauder Maplesugar
Fragrance-nothin' because we had to go to medical offices where it wouldn't be polite. I'm going to douse myself in the vintage formulation Bijan I recently got hold of before bed. It is MAGNIFICENT. 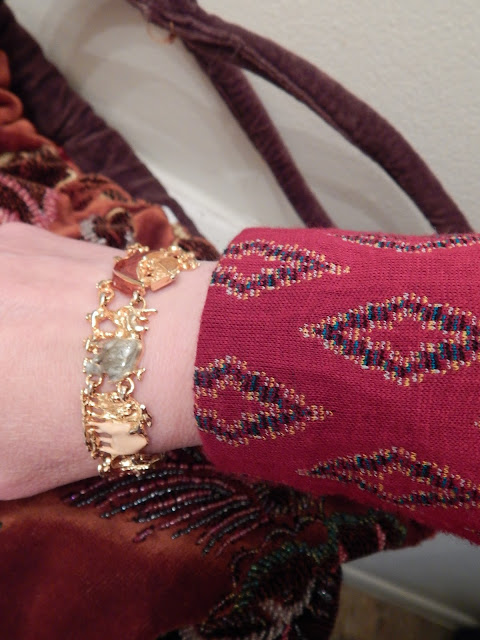 There's a political debate on TV tonight-it would be good for laughs if there wasn't a very real possibility we're going to end up with one of them as president. 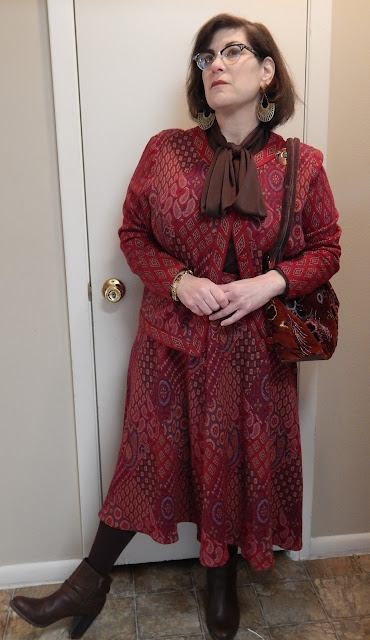 I'd better keep this short, as the one-handed typing is getting tiring.

I so come here to be flipped off but if you feel the urge to give us the thumbs up I will know what you really mean!! Poor you, hope it all gets sorted soon for you, I mean, typing with one hand, FFS! Even over here we are seeing the clowns who want to run your country, god forbid D Trump gets in! We are the same shortness my sweet, that news makes me very happy and I too will not share any of the other menopausal stats I have accumulated but I hear your pain!

Good news, first. That suit, those accessories, that bag -- you lack only a parrot-headed brolly to be absolutely perfect in every way! Moi, I am also operating at the same level of vertical challenge as you and Sue. No doubt this explains why I see eye to eye with both of you on so many issues -- but let us not foul the air with disgusting topics such as the American presidential candidates and icky menopausal stats. (I do recommend Menopause the Musical, however.)

Bad news, last. Gah, that finger is painful to behold! Do be patient with yourself, especially when you discover routine tasks difficult. Clever woman that you are, you're sure to invent accommodations! When my mother lost her "wringing grip" to Parkinson's, she refused to cease doing her own hand laundry. Instead, she plopped the soggies into the tub, covered them with a towel, then stomped them like grapes. One predicts you'll invent a keyboard convenient for one-handed typists.

@Sue
You look so much taller in your photos-it must be the clothes you wear having an elongating effect (I'm taking notes!). Really, I would have guessed you about 5'8.

@Beth
You as well? Funny-the Internet does hide a lack of height well. I was going to suggest we figure out a female version of the Napoleon Complex and start acting like tyrants to compensate, but a Josephine Complex sounds like we'd be out buying Empire waist dresses and dousing ourselves in perfume...wait...that doesn't sound too bad. That's it, We're "The Josephines". Don't mess with us or we'll douse you in Imperiale!"
We should get shirts made. Sort of like the Red Hat Club with better clothes and perfume.

I've shrank an inch in height over the last 10 yrs. I was told it was due to gravity, rather than menopause. The discs between C6, C7, and C8 in my neck are completely goners. Collapsed. I shall probably have to have them fused if arthritis doesn't fuse them first. I've lost weight but shrank an inch, that is not fair!
That finger looks painful, I wonder why your immune system started attacking your finger joints? Any recent trauma that would trigger an inflammation?
Wearing those autumnal hues gorgeously as usual!
You could give us the thumbs down I suppose?

I'm 5' 3" too! At least I was the last time I measured my height which was quite a while ago.

Your poor finger (s). I hope the medicines help and that you get back to normal - there are bits of getting older that are a bummer.

Your outfit is lovely - such a good print and the brooch is just perfect with it. You really look like you should be going somewhere special not the doctor's! Maybe out for afternoon tea with your friends?

Babies with hand guns? That is just complete madness - gawd help us all. It's not bank heists I'd be worried about but kids shooting kids because they took their sweets/DS/lego!!

@Bibi
I think it is just the normal progression of RA. The rest of my joints have been getting it for years, but my hands hadn't been too bad.

Neck trouble is the worst thing-I'm so sorry you're going through it.

@Okay Veronica, you're in the Josephine club too! At the very least, someone has to made a web-badge thingie.

Might be hard to insist on a nap when baby is armed.

I hesitate to comment on the political part of this post, still here it goes. Is it because I am out of touch with the average voter or what? How can the "one of them" (I'm sure you are referencing) be a likely real choice? I do not know anyone who thinks this is a good idea. Are my fears justified or are we as a country in a world of hurt if the election would fall in favor of "one of them"

On a lighter note, I hope that finger lets up and gives you some relief. Gardening season is just around the corner!

I don't think you're out of touch. I do think it is going to come down to a Trump/Clinton race, but that's just my sense-I seriously hope I'm wrong because I would find it painful to cast a ballot for either of them, for different reasons.

It has already started getting ugly here-maybe people in Ohio are more sensible, but nastiness, racism, and religious bigotry I'm hearing from people who now feel free to let loose with it because there's some sort of safety in a mob, is really scary.

My real concern is that people will just stay home rather than turn up to vote and hold their noses whilst pulling the lever.

We have separation of powers, so I'm not too worried about who ends up in the white house-and we get to vote them out in four years if they screw-up. I AM however really worried about the people that are driven to act on this sort of rhetoric. If you tell unstable people their way of life is in danger of being destroyed, god knows what they'll do. That's not a one-party problem-Clinton has people just as freaked out over people that own guns (I know many, many hunters that never went on shooting sprees-I'll bet you do too).

Inducing hysteria is good politics, but it is bad citizenship, you know? I'm getting old enough to have seen this nonsense unfold with each election cycle, and I guess as long as people keep falling for it, they'll keep doing it.

I'm sorry to say, I DO know people that would relish a Trump presidency. People I thought I knew well.

"Inducing hysteria is good politics, but it is bad citizenship, you know? I'm getting old enough to have seen this nonsense unfold with each election cycle, and I guess as long as people keep falling for it, they'll keep doing it" These are perhaps the most profound words I have read about elections. Goody the voice of reason. I love it!

Your words give me a real sense of obligation to be more accountable as to how I voice my opinion or not voice it all. Thanks!

I hope the steroids sort the finger out. It must be frustrating as well as painful.

I'm not going to say anything about politicians, given ours seem to have taken to 'Your mum...' jibes in parliament. It got so bad the other week that Radio 4's flagship new programme got a bunch of eight year olds to listen to Prime Minister's Question Time and say what they thought of it. (Their verdict? A bit pathetic and babyish.) And, of course, we have Boris. I'm still startled that some of the candidates in the US are considered anything other than joke candidates, but then none of them have been accused of congress with dead animals.