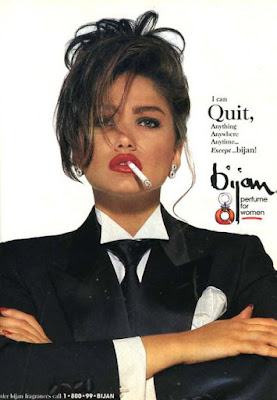 I spotted the bottle of Bijan for sale, and for the life of me couldn't remember what it smelled like. I knew it was strong (that much I could remember) but the details were lost in a cloud of other big, 80's fragrances. I remember my mother had a bottle, but smelling it now (and I am smelling quite a lot of it because I cannot stop spraying myself with it) I'm not sure she ever wore it-surely I would have remembered it-Bijan wants to be noticed.

I'm wary of spices in perfumes thanks mostly to perfumes like Tabu and Cinnabar.  But Bijan is not a clove-studded pomador, or a cup of Constant Comment tea. Bijan is a sweet, floral, spicy, musky beauty covered in a blanket of glorious oakmoss. This perfume is so damn beautiful, I can't believe I haven't been dousing myself in it for the last 30 years.

The opening of Bijan is a lovely dose of orange blossom and bergamot that lasts but a moment before the carnation and tuberose break through. There's something interesting that happens here-the perfume goes from being bright and citrusy to deeply floral, and then it suddenly turns sweet-I mean really sweet like you finished a box of Turkish Delight and then went back and licked all the cornflour/icing sugar off the cardboard box. It is the sugary/floral combination that in any other perfume would send me running, but in Bijan it just floats effortlessly to the next set of notes, sweeping it all together into a cloud of loveliness. But Bijan is no gentle cloud. Bijan's notes jump back and forth like cloud-to-cloud lightning, striking, then retreating. The overall experience is so exhilarating it might well be the perfume equivalent of severe weather.

The amber and musk emerge with a heavy dose of honey that would be suffocating except that it is met with an abundance of oakmoss. Cedar and sandalwood create a warm base that gives an impression of spiciness without any actual spices. Bijan has no cinnamon, cloves,or ginger-but you'd swear it was there. I think that's the magic of Bijan-you get warmth and spice without the harshness of cinnamon or the dentist's office smell of clove.

Bijan has a massive silage-you get your money's worth. This is a positive, because unlike so many perfumes that take a bit to really kick into gear, Bijan is glorious from the first spray to the waning hours of its longevity. I can honestly say, I adore Bijan start-to-finish, which isn't something I can say of many perfumes.

Bijan gets described as, "exotic", which is fair enough though by today's standards it would hardly be,   compared to some of the oudh-based perfumes. If there's anything exotic about Bijan, it is the way the perfume is composed, mixing herbs like basil with the sweet notes of honey. The  real exotic nature of Bijan is in the perfumer's artistry-this is a gorgeous composition.

Did I mention Bijan is strong? Oh, yes it is. If you're at all worried about reaction from people being choked out around you...well, screw 'em. You're entitled to be fabulous. But supposing you're a considerate person, you may wish to go very light with your first couple applications, particularly if you work in a closed space. Bijan isn't a perfume that goes unnoticed, so use your discretion. I wouldn't describe Bijan as a good office scent unless you can get into a time machine, go back to 1986, and then Bijan will be a welcome change from all the other things people were dousing themselves with in the 80's.

And a few others that are slipping my mind at the moment. I can't say this is my favourite era for perfume, but there were some gems in there, like Bijan. Sometimes it is good to re-try things you didn't care for at the time. I know as I've aged my nose has changed along with my tastes. One 1980's fragrance I'd like to get my hands on is Alyssa Ashley Gardenia. I loved it (and the talc and matching body lotion) but never see it turn up. Being such a cheap fragrance it might not have held up all that well. There was a lilac version to the line as well, and something else I can't remember. Rose perhaps?

My only issue with Bijan is that in the first few minutes of wear, it makes me a bit sneezy/wheezy. It goes away quickly without turning onto a full-blown allergy, but there's something there giving me a mild reaction. As it goes away as quickly as it arrives, I've been ignoring it, but I would be curious to know what the problem is. Looking at the notes, there's nothing there I would react to. There's perfumes worth suffering for, and Bijan is one of them. Good heavens, I'm completely enchanted by this stuff.

Bijan is inexpensive and easily found at discounters like Marshall's for little more than pocket change. I'd probably spray the house with it, but Danny loathes anything with noticeable oak moss and reacts like some sort of demon being splashed with Holy Water in the movies. He might as well be hissing, "It burns! It burns!" for all the dramatics, so I largely avoid wearing anything too heavy on the oakmoss if we'll be riding in a car together. If I used Bijan as air freshener, He'd run away from home.

I own a lot of perfume, and I can find something positive to say about most of them, even if I don't chose to wear them (there are of course exceptions). I rarely get excited over a new (to me) perfume, but Bijan blew me away. That it cost six dollars a bottle makes it all the better. I have no idea how it will work in the warmer weather, but I can see Bijan falling into regular rotation on my perfume tray. This perfume is so close to perfect, I feel like I've found a fragrance soul-mate. Bijan is so far outside the sort of notes I typically like, it makes me wonder about all the other fragrances I overlooked thinking I wouldn't like them.

Stop in from Vintage Vixen. I recall department stores having all sort of perfume and make up out.
And people would sample them.

Are you planning to revisit Giorgio on your olfactory trip through the 80s? My least favourite perfume ever, hands down. Angel and Poison I can bear in small doses on other people, but just thinking about Giorgio makes me feel all 'eurgh'.

They still do in the expensive stores...but I don't shop there *wink*.

@Mim
I recently caught a whiff of Giorgio Red at Goodwill, and that was as terrifying as I remember it. The original Girogio wasn't my kind of thing, but I worked with a woman that wore it-and on her it was beautiful. I don't know if it was combined with other products, or body chemistry or what, but she always smelled wonderful. Maybe it was one of the knock-off impostor fragrances and she didn't want to admit it, but all my experiences with Giorgio ended in headaches.

I need to revisit Poison. Angel is still alive and well in Omaha, so I don't need to try it again as every third or fourth person on the street is wearing it. Blech.

Have you had special training to be able to recognise all these different notes in the perfume? I just smell the top notes and then what's left!

I'd never heard of this perfume but now after reading this I want a bottle!

Of the ones you mention above I know Samsara, Knowing (I like Estee Lauder perfumes; my favourite was/is Azuree - only available from Selfridges here in the UK and only in a splash bottle not an atomizer) Cinnabar - oh yes!

No special training, just a lifetime of loving perfume. I do have a good nose, which has been a mixed-blessing over the years (there are things a person just doesn't want to smell!), but there are as many things I can't smell (jasmine) as I can. I can typically pick off what someone's perfume is composed of even if I don't know the name.

You can train your nose to recognise notes. A scent diary is a good way to keep track of scents under various conditions, and your impressions hour-by-hour paying attention. I try to take notes when I'm reviewing a perfume, even something I've worn for years. Half the time I can't smell the notes listed by the manufacturer for something, or I smell something different. A little chemistry study will help with identifying some things from the bottle packaging-but not everything of course. It does help if you know what you're supposed to be smelling, but sometimes the overall impression is what counts.

I like Azuree a lot too. I think they did a very good job with the reformulation (except for that special edition Tom Ford Azuree-that stunk). My son complains that Azuree smells like "Cabochard mated with Bandit" but I think he's being a bit harsh. Clearly, it is the child of Aramis and Estee!

I saw bottles of Bijan in the Latino discount perfume stores all over Miami last September. I also remember it being strong but didn't recall the notes. It sounds divine though, I love all those florals & spices contrasting with the sharpness of oakmoss & benzoin.
I find expensive department stores to be great places to sample perfumes, but I certainly don't buy there.
My mom wore Giorgio by the bucket loads ever since it first came out.
Tabu, Opium, and Angel are the ones I can't stand. I like gourmands but Angel is just nasty, the chocolate & praline notes smell cheap & artificial then to add to the assault it's backed up by that weapons grade dose of patchouli. YUK.

@Bibi
I've been tempted to buy a decant of vintage Opium just to see if I'd like it better now. The current formulation is ass. I never understood the appeal of Angel. If I want a chocolate chip cookie, I'll bake some...I don't need to wear 'em.