Cloches, and Other Family Fashion Fails 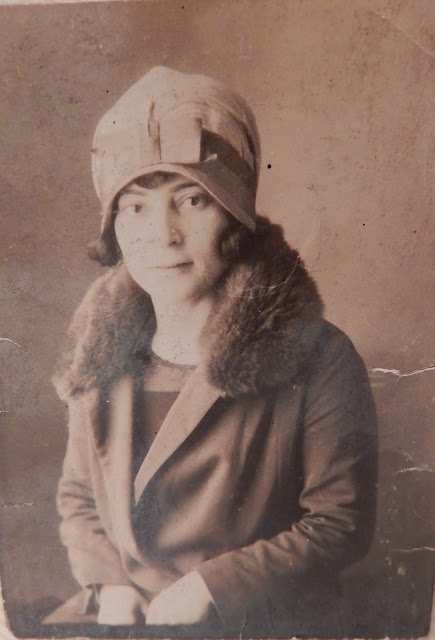 Even my beloved nana, Clara couldn't make a cloche look fashionable. If she couldn't pull it off, you probably can't either because she was the best dressed woman I've ever known. She was about 26 here, and I believe it was taken when she arrived in Canada.

This was her husband, my grandfather Jake. He had a news stand on the South Side of Chicago. In the background, you can see the original Walgreens (before they were a multinational). When they painted the store, they'd come over and put a coat on the stand for my grandfather. He dressed like that for work every day, with a tie. And yes, it wasn't just the paperboys that wore the flat caps. Another hat fail for the family photo album, but the rest of his clothes look smart. This photo dates to 1947. I never met him as he died not long after this photo was taken. My grandmother remarried in the early 70's. 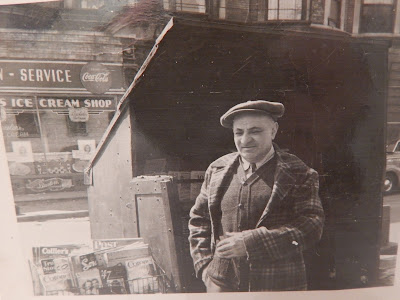 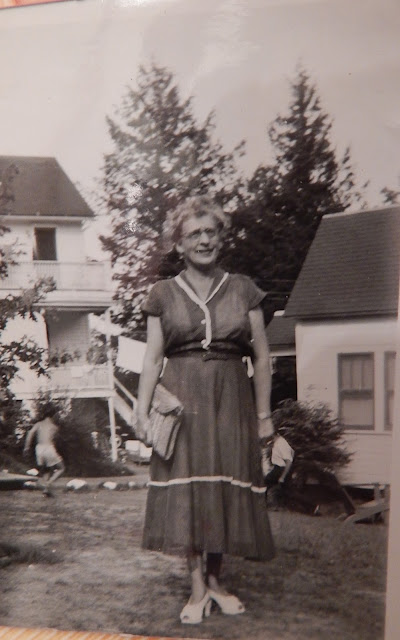 This is Aunt Jeanette (my grandfather's sister-in-law). This photo was taken in upstate New York where she lived with Uncle Joe. I tried to zoom up on her shoes and handbag, but the photo was too blurry to begin with. I think we can get the idea though. No idea who the kid in the background was-it wasn't theirs. 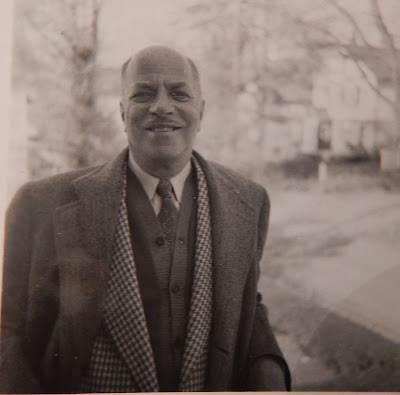 This is Uncle Joe. He was a Communist, and he wouldn't apologise. I'm named for him (just the first letter, but that's a peculiar superstition we have about not giving the same name to two people or the angel of death might get confused and take the younger). I'm just Bolshie enough to appreciate being his namesake. When his dog died, he penned an obituary, and managed to get it published in the paper. I forgot to mention-it was a half-page obituary complete with photos. He really loved that dog. I can't find any fault with his clothes-Uncle Joe wins the family, "Best Dressed" award. Even the mustache is perfect. 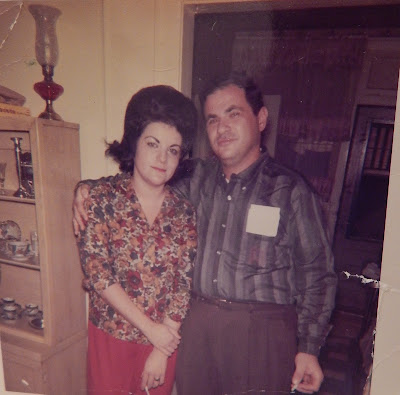 I'm going to caption this one: Don't Marry a Guy You Only Dated For Two Weeks. Six years into the marriage, they have that look of, "Snap the goddamned photo already so he will take his arm off me." They spent 36 years of misery together until my mother died. Kids, there's a lesson here-long courtship.

My parents, could have used some fashion help. I like how they couldn't be arsed to put down the cigarettes for a photo. My mother favoured trousers to skirts and dresses, which sometimes did result in her being turned away from restaurants as she wasn't appropriately attired (that was still happening in some places into the early 70's). It didn't stop her though. Unless it was a formal affair like a wedding, she wasn't likely to be found wearing a skirt after about 1960. I always wondered where those candlesticks came from that I see in the bookcase. I have them now, but I was never sure if they belonged to my grandmother. Old photos are great for establishing provenance. This photo is dated 1963, which looks about right. Eventually the piano ended up where the bookcase was. 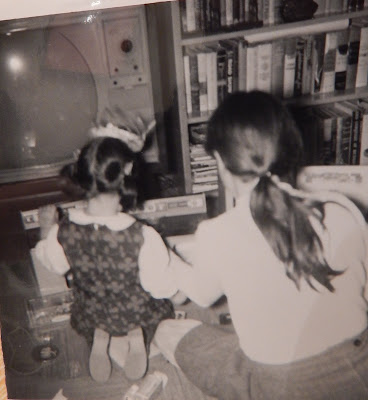 This is my sister and myself playing with some toy. I'm wearing what looks like a party hat, so perhaps it was my birthday. I remember that television, and I remember when we got rid of it. That was the worst day of my life. We had a Grundig shortwave, which I spent more time with anyway, but seeing that television being taken out of the house was heartbreaking. I think I cried. I'm sure I did. I tried zooming up on the books, but all I recognise are the set of Churchill books. We did have books all over the house, something I'm really thankful for all these years later. I can't believe they made me wear a pinafore with a Peter-Pan collared blouse beneath. What sort of sadist was my mother? I'll bet Judi dressed me. 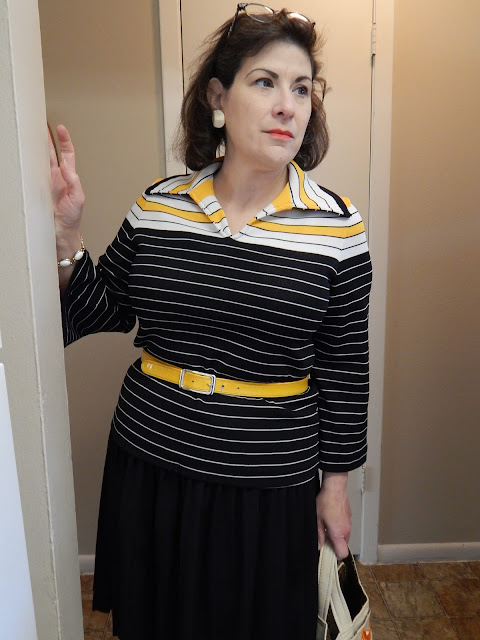 Today, I'm still dressing like it is 1970-but no Peter-Pan collars, thanks. 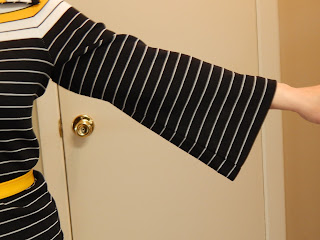 What this polyester beauty needs is a wide-leg pair of white sailor trousers. Let me know if you spot any in my size. 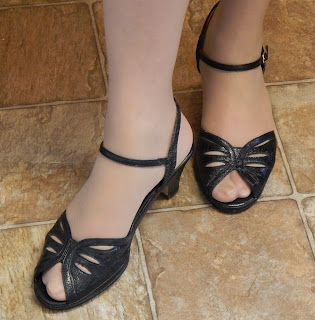 My vintage Naturalizers are cracking apart, but I'll keep wearing them to the bitter end because I adore them. 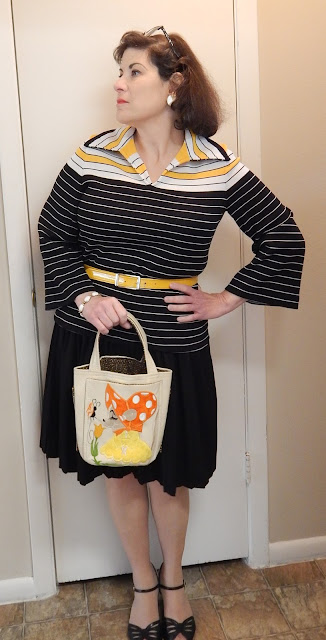 I'll wear just about anything, but a cloche. Sorry Nan, but those hats make everyone look stupid. Well, maybe if I move to Canada and need to keep my eras covered in winter I'll consider it.

Have a great weekend everyone!

I just love old family photos. Just LOVE 'em. These are great. But I am so sorry to inform you that I like cloche hats. I think they're cute. I'd wear one today if I could find one that fit my monster head. And your bell sleeves are so very 70's. Nice. I'd hang onto those Naturalizers, too. I'll bet they're super comfy.

Hey now, I look good in cloche hats. I do have a Betty Boop sort of face though. The rest of 20's clothing doesn't quite jive with my bosomy figure though. I have a photo of me wearing my gran's fox fur collar coat, I look like a middle line backer in it (but so did she).
I like your mom's Priscilla Presley hairdo. Oh the ever present cigarettes in those old photos. My mom always had a Virginia Slim between her fingers.
Uncle Joe is so dapper. Unapologetic commies who love dogs ROCK.
That striped shirt is lovely, white flares would take that into Spring just as well as sailor pants. That looks like a Jantzen or White Stag design.

Please take a moment to write these brief bio's on the back of the ancient photos! Danny will be grateful, especially if you can locate a copy of Uncle Joe's dog's obit. My parents were both the youngest of large families and so inherited not the albums with the extended photo captions, but only the loose photos "worth keeping". When they passed, it fell to me to edit the shoe boxes over a bin. Sad that we now know so little about the Gibson Girl "Goldie. G-G-Grandpa's prettiest sister...she died young."

Now do re-think the cloche aversion. You're right about the white flares, but what about substituting white espadrilles for the Naturalizers and adding a white cloche. Think Lucia walking to the beach from the Grand Hotel!

I'm with Bibi, the cloche suits your gran and the Priscilla Presley bouffant suits your mum. An anti-garter belt, pro-trouser rebel was she? Was she a feminist intellectual -- or did she simply dislike domesticity?

I love cloche hats! I had one in 1969 when I bought a brown cloche hat at Biba, when I first started working, along with brown geometric patterned culottes and a brown, bell sleeved top. I wore the whole ensemble with lace up granny shoes and thought I looked the dog's whatsits! Wish I had a photo to share.

I love your family photos and your grandfather is a very dapper dresser. Good for him getting the dog's obituary published!

My maternal grandparents emigrated to Pittsburgh in the 1920s from rural Ireland. My two eldest aunts were born there. I have some lovely photos of my grandparents in their 1920s outfits (and the other passengers)on board a ship, on their return journey to Ireland at the end of the 20s. If I ever get my printer sorted I must post those photos.

Your striped top is lovely and white wide legged trousers would look fab with it! You look very elegant in your outfit. If you tell me your size I'll look out for a pair of white, sailor type trousers for you. The white, pleated, see through ones I had would have been ideal but I gave them away....

Have a lovely weekend x

I love cloches too, sorry! I think they look good on me, but they fight with my glasses - without which I can hardly see - so I can't wear them. I like your Mum's blouse!

You don't have a giant head (but if it spares you a cloche, it is a blessing in disguise ;)

@Bibi
You're a cloche lover too, eh? We'll have to agree to disagree, though I've not seen you in one, so I'll reserve judgement.

The top is old JC Pennys. I wish they still sold great stuff.

@Beth
Yes, I've been doing that-I'm the youngest of all the children and cousins so it really does end with me if I don't. When my dad was still around I had him tell me who many of the people were-and he always had great stories to go with them, though how *accurate* they were, well....families.

Uh uh, no cloche for me.
My mother went to art school, and hung out in those circles so I think it was more of a beatnik type thing. She wasn't exactly a rebel, but she wasn't going to "go along to get along." She definitely wasn't domestic-my dad had to hire a housekeeper or the house would have fallen down.

@Veronica
Another cloche woman! I had no idea the hat style got such love from people beyond the 20's.

That's interesting that your family came and left (though I might have done the same if the steel mills were the first thing I saw). Pittsburgh is nice now, but in the 20's, it must have been frightening. My husband's mother's family comes from Pennsylvania, and looking at the photos *everything* people, houses, streets are covered in dirt. It must have been very hard.

My grandmother had such a terrible crossing of the Atlantic to Canada she never got on another boat in her life-even a motorboat-and she lived to 102. We had a hard time even getting her close to a beach.

@Radostin
Really? I'm clearly outnumbered on the hat scene.
I like that blouse too, but I have no memory of her wearing it-it would have been a bit "country" for her, so maybe it was a phase she went through, and got rid of it. When I was a teenager, I found a metal wardrobe in the basement with close she'd saved from the 40's and 50's and made good use of them in High School. I still have a few pieces, but unfortunately, I don't have the figure to wear them anymore.

Ooh, I can definitely picture you in that top with white trousers.

Would a bit of dubbin help the Naturalisers? I use that on my hiking boots.

Your family photos are such fun - Uncle Joe sounds like quite a card. If you've got to be named, or at least initialled, after a relative, he's a good 'un.

@Mim
And his name was, Uncle Joe. I mean, come on-it don't get more commie than that!

Dubbin is a good idea. Thank you.